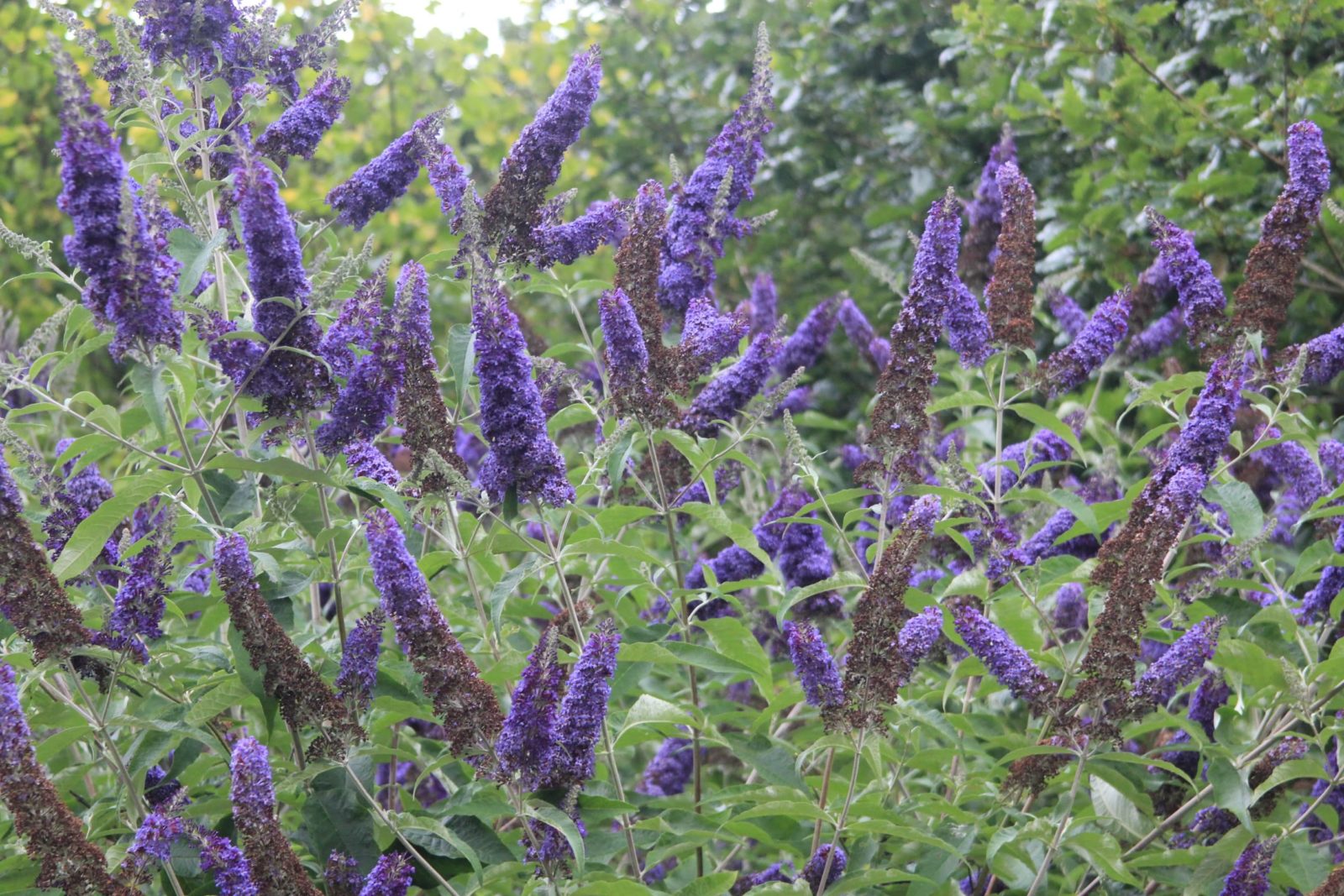 Buddleja – often spelt ‘buddleia’ – is a beautiful and commonplace plant in British gardens.

Its splashes of purple, pink, and violet bring colour, and the sweet nectar brings butterflies and bees-a-plenty!

In fact, this plant is often called the butterfly bush because they love it so much.

There are tons of reasons to consider buddleja for your garden. It is versatile, hardy, and attractive. It comes in a veritable rainbow of colours. And the honey smell that is so enticing for pollinators is also quite appealing for a human nose!

In this article we’ll cover everything you need to know about buddleja, from choosing the right variety for your garden, through to planting, care, and ongoing maintenance tips.

This plant sits in the Scrophulariaceae family, alongside plants like cape fuchsia, nemesia, figwort, and others. There are several types, some deciduous and some evergreen.  It is actually a Chinese plant, but it has made itself firmly at home in British gardens since its introduction.

Buddleja is popular for many reasons. We mentioned the fact that it is great for attracting butterflies: so much so that the RHS has chosen buddleja as one of its Plants for Pollinators.

It also blooms in August, which can be a quiet month in flowering gardens. This makes it appealing to gardeners who want a garden that blooms for as much of the year as possible.

Finding the right variety comes down to deciding which colour you want, the size of the space you have to work with, and a few other factors.

Choosing Buddleja For Your Garden

There are varieties of buddleja ranging from compact to sprawling. Considering that size, colour, and shape vary between the different types, it’s worth familiarising yourself with each one before deciding which to plant.

Probably the most common type of buddleja. If you’ve seen buddleja before, this is most likely the variety you’ll recognise. It can grow up to about four metres in height, over a period of five to ten years.

This variety – also known as buddleja alternifolia – is known to be less invasive than some others. Gardeners who want to spend less time deadheading buddleja to prevent it seeding everywhere (more on that later) may be interested in this type.

B. alternifolia will reach similar heights to blue horizon, but over a slightly longer timeframe.

This hybrid between two other types of buddleja is popular for its lavender colour, punctuated with orange dots. It will grow slightly smaller than blue horizon and B. alternifolia: up to a height of around two and a half metres.

Another hybrid: known for its bright blue or purple flowers, and which will reach similar dimensions to the lochinch. These varieties are more manageable than the big, sprawling ones!

Named after the adventurous escapade required to collect cuttings from a ravine in Dartmoor, this hardy buddleja has a more rugged look than some other varieties. It can grow up to five metres tall and has a nice magenta colour flecked with white.

Some buddleja varieties are named for the butterflies they attract. Marbled White, Adonis Blue, and Purple Emperor are three examples. With these varieties, the clue is in the name: they will bloom white, blue, and purple respectively.

It’s worth noting that while buddleja is great at attracting butterflies, they don’t use the plant as part of their breeding cycle. This means they’ll come to feed, then head elsewhere when it’s time to make the next generation of caterpillars.

By spending time investigating the different types of buddleja – and there are a lot! – you’ll be able to find something that complements your garden and fits your tastes.

This plant doesn’t take much work. You can tell from the fact that it grows quite happily in untended land, alongside railway tracks, and other areas that aren’t actively gardened. In fact, most of the work you’ll be doing will be preventing your buddleja from growing too much, or from seeding itself all over your garden.

When to plant your Buddleja

Buddleja needs to be planted in fairly warm soil, so you’re best waiting until later spring months. Daytime temperature should be around ten degrees celsius, and should not fall below zero in the night.

If you’re growing from a container or planting out stronger saplings these can be planted up until the end of August.

Before planting, ensure the soil is loose, and mix in some compost. Place your buddleja plant into a hole with a diameter about twice that of the pot you’re planting out of. The top of the roots should be level with the surface of the soil.

This plant favours dry soil, and will not thrive in soil that holds a lot of water, especially in winter. They prefer alkaline soil, so check the pH is suitable.

Buddleja is a great choice if you have a coastal garden, thanks to its hardy nature and ability to grow in chalky soils.

Larger varieties need to be planted about two meters apart to give them space to grow strongest. Smaller varieties will be OK with a meter separating them.

While this may seem like a lot of space when planting small shrubs, bear in mind just how voluminous this plant can get later in its lifecycle!

To thrive, buddleja should be in a warm and sunny position in your garden. They need a few hours of sunlight each day, at least. This stimulates maximum nectar growth, making things as sweet as possible for the bees and butterflies.

As we’ve said, this is a fairly hardy plant that can look after itself quite comfortably. There are a few things to keep an eye on, though, to give the best chances of survival.

If rainfall is lower than two or three centimetres in summer, water your buddleja. Otherwise, the rain should take care of it. Remember this plant is drought-resistant, so will not need to be watered as much as some other plants in your garden.

In spring, when the buddleja is growing freely, you can water it fairly frequently. Hold back in the autumn months though: this plant does not thrive in very wet conditions.

Saga Magazine notes that buddlejas need “savage pruning”, and their strong language is fully justified. Be aware that you’ll spend a lot of time cutting this enthusiastic plant back!

Pruning brings several benefits though, so it’s worth doing. Firstly the plant will be more kempt and tidy, which makes your garden feel less messy. And secondly, the flowers will be healthier and more vibrant on a pruned plant. Larger plants tend to get woody and have limited flower growth.

Late spring – around March – is recommended as the best time to do this, as the plant has time to recover during the warmer summer months. Cutting buddleja back in autumn can cause damage and even death over winter.

If you’ve inherited an overgrown buddleja, you’re best off pruning it in two halves – one in each of two subsequent years – to prevent traumatising the plant.

When the buddleja flowers start to fade, it’s time to deadhead them. This will encourage vibrant new flower growth.

Deadheading is removing the flower completely, as well as a couple of inches of the stem below it. This may seem drastic but it is an important step in stopping unwanted seedlings, keeping the plant healthy, and fostering optimal growth.

While it’s not relevant in the UK, it’s interesting to note that buddleja is so keen to distribute its seeds that deadheading is compulsory in many American states.

Dressing buddleja with manure or adding some organic fertiliser is a good way to increase the number of flowers, although some gardeners advise that it may actually stimulate the growth of foliage instead. There is a difference of opinion on whether buddleja should be fertilised.

If you do decide to, manure should be placed in autumn; fertiliser in late spring.

Adding a new layer of compost or mulch each spring will keep moisture in and reduce the build-up of weeds.

Other things to look out for

Particularly big buddlejas will begin to look like trees, and their trunks may peel. If this happens, don’t panic! It’s normal.

This is a notably hardy plant. Particularly strong winds can blow branches off of larger buddleja plants, but aside from that, it will most likely keep itself out of harm’s way. Here are a few potential threats to look out for.

Buddleja is prone to several bugs, including mites, nematodes, and caterpillars.

The mites are small and hard to see, but if you suspect your plant is infected, a good way to find out is to shake a branch and hold a sheet of paper below. If small orange or green mites fall onto the paper, then give the plant a good blast with a hose to remove them.

If nematodes take hold, they are harder to get rid of. The priority here becomes keeping the plant healthy and ensuring it gets all the nutrients it needs. Take extra care not to overwater in this circumstance, as nematodes thrive in moist conditions.

Buddleja is also more prone to mildew when left damp for a long period of time – another reason not to overwater. If you find mildew on your plant, remove those stems. You’ll be able to tell by the leaves becoming yellow at the top, or by patches of mildew on their underside.

Root diseases can affect buddleja, and again the risk increases with overwatering. If you see small, yellow flowers, this could be why. Improving drainage is the first step: sometimes the problem will take care of itself. If not, applying a fungicide to the roots may help.

It’s worth noting that while rare, these diseases can kill buddleja. The takeaway then? Take extra special care not to overwater this plant!

This plant lends itself incredibly well to propagation via cuttings, and you’ll often have newly flowering shrubs within a year. If you want to increase the amount of buddleja in your garden or to give cuttings to other people, here’s how.

Cuttings should be taken in late spring. Shoots above 15cm in length should be trimmed beneath the node.

To give the cutting the best chance, remove any particularly large leaves. This allows the cutting to direct its growing energy into the roots.

Place the cutting into a mix of horticultural sand and compost, about half and half. You can dip the stems in potting hormone before planting to give them a little extra boost.

Then cover them with cling film or glass to keep the moisture in and the air warm. Check frequently, removing any dead or dying bits to maximise the cutting’s chance of survival.

When you see roots popping out of the watering holes, or the leaves start to look especially perky, the cuttings are ready to be planted out.

So there you have it…

Buddleja is a bold, bright, and beautiful plant. It comes in a range of colours, each bringing a slightly different ambience to your garden. Their fragrance is pleasing for humans and enticing for pollinators, making it a very popular choice.

There are plenty of varieties, meaning its available in pretty much all shapes and sizes. Choosing the right buddleja for your garden is essentially a case of deciding how big you want it to grow, and what colour you want it to be.

Because it’s so hardy, buddleja requires less work than many other plants. In fact, the main work you’ll be doing is pruning it back!

We hope this guide has answered all the questions you had. Happy gardening!