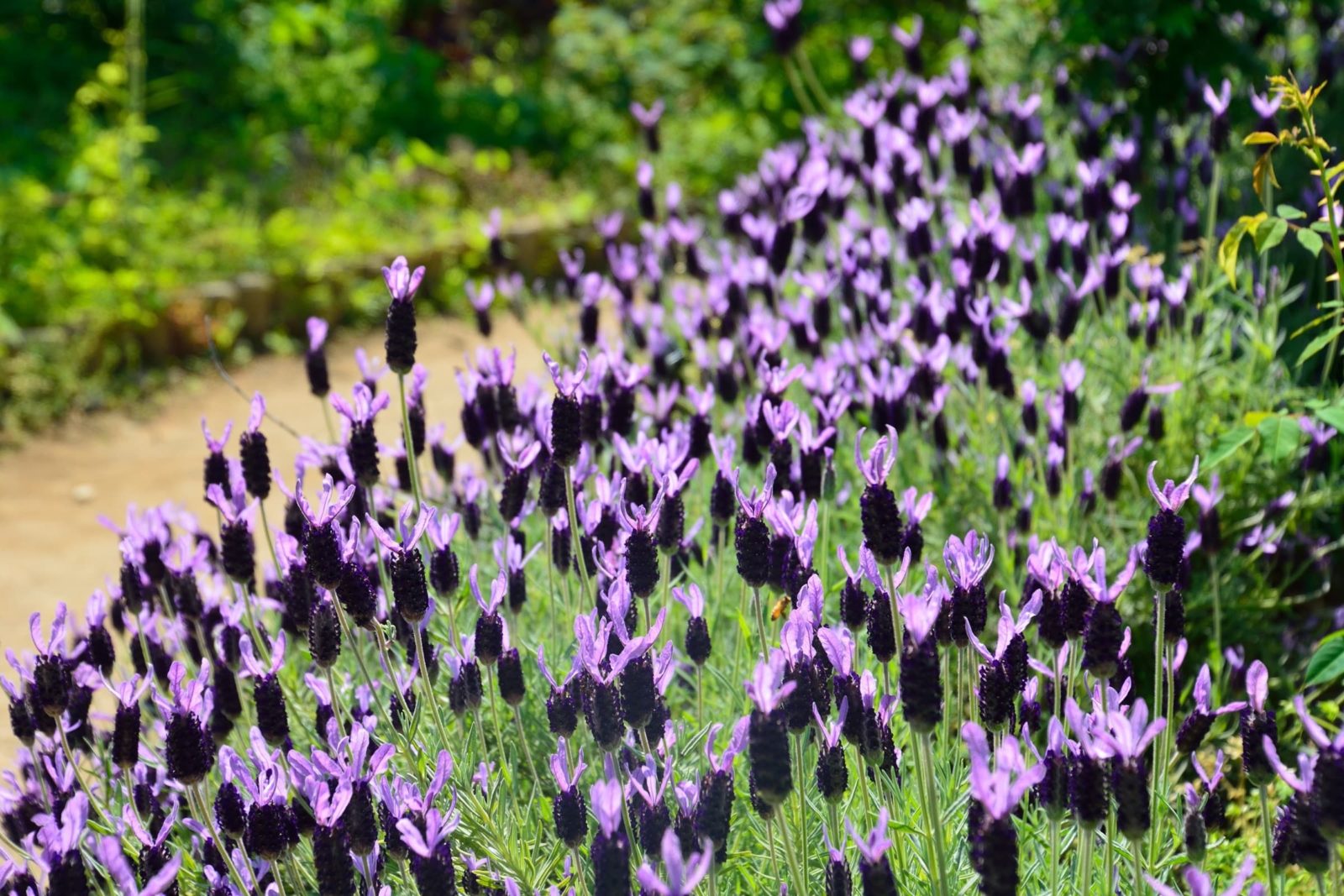 French Lavender, known formally as ‘Lavandula stoechas’, is an evergreen herb shrub with aromatic properties. It is also sometimes known under the names ‘Spanish Lavender’ or ‘Butterfly Lavender’.

A bushy, low-maintenance plant, it looks and smells beautiful – and can grow almost anywhere, which makes it incredibly popular amongst UK gardeners.

Despite being low-maintenance, to get the most out of this stunning plant, we recommend following our tips below to ensure it is planted in the right areas and cared for properly over time.

Lavender is commonly used in perfumes, potpourris and essential oils – with properties that are said to help invoke a good night’s sleep. In the past it was also used to perfume baths and clothes, so it’s fair to say that this is a smell most people will recognise.

The plant itself will grow upright – usually to no more than a metre in height. The fragrance emanates from the cylindrical heads that taper to reveal bright purple flowers, often referred to as its ‘ears’. These elegant flowers are also the origin of the name ‘Butterfly Lavender’.

The leaves of the plant are long, pointed and bushy – resembling those of Rosemary.

French Lavender is said to be less hardy than its counterpart English Lavender (see our comparison below) and will generally last around five years. There are ways in which to preserve its lifespan through cuttings, which we cover in more detail below.

Flowering season typically begins in early May, with further flowering mid-summer and in late summer or early autumn.

Interestingly, French Lavender is actually considered a weed in many parts of Australia.

Because this is such a battle-hardy plant, it can be grown nearly anywhere. However, we do recommend placing it in an area that will avoid frost. Temperatures of -7° and below will likely kill the plant, so it needs protection in extreme winter conditions.

Lavender can be used in garden edging, on banks and slopes, adjacent to walls and fencing, near ponds and outdoor water features. It pretty much fits in anywhere.

It’s recommended that it should be planted in a location where it will receive maximum exposure to sunlight, but still be sheltered from over-exposure to wind and rain.

Generally it will fare best in soil that is dry and well-drained – the RHS recommend soil with Chalk, Sand & Loam properties for it to thrive. Good drainage and proper air circulation are essential if you’re plating French Lavender in a warm, humid climate.

Watering is easy – as a Mediterranean plant, French Lavender thrives in hot, dry conditions and will rarely need watering. You may need to give it a hand in the event of a heat wave but otherwise, rain water should suffice.

As the plants fade out of bloom towards the end of summer, you should look to remove the heads by cutting the stem below the spent flower, ideally just above the first healthy set of leaves. This is known as ‘deadheading’. Not only will this keep the plant looking its best, but it will promote fresh growth the following season.

Only ever prune growth that still bears leaves. You should never cut into the wood of the plant (or it won’t grow back) and it’s important not to take too much away when cutting.

Use secateurs when pruning as these will offer a good, clean cut. When pruning you should look at young shoots rather than old growth – these aren’t going to respond well to pruning. Cut roughly two-thirds of new growth back towards the old wood – this will leave fresh shoots for the following season.

You can use the flowers as a fragrance in potpourri and even store them in your wardrobes to enhance the smell of fresh laundry.

Whilst these lavender plants are related and highly similar, there are some subtle differences between the two types that are worth noting.

The first and probably most important difference is the smell. The typical Lavender smell that many have become accustomed to is the scent of English Lavender. The French plant produces a similar smell, but it has subtle hints of Rosemary too. Worth considering if this is your main reason for growing the plant.

English Lavender is hardier than the French variety, which will struggle to tolerate very harsh winter conditions.

French Lavender will generally grow taller than the English variety – reaching up to a metre tall, nearly twice the height. The flowers last much longer on the French plant, with a bloom time that lasts all the way from the beginning of spring to the late summer.