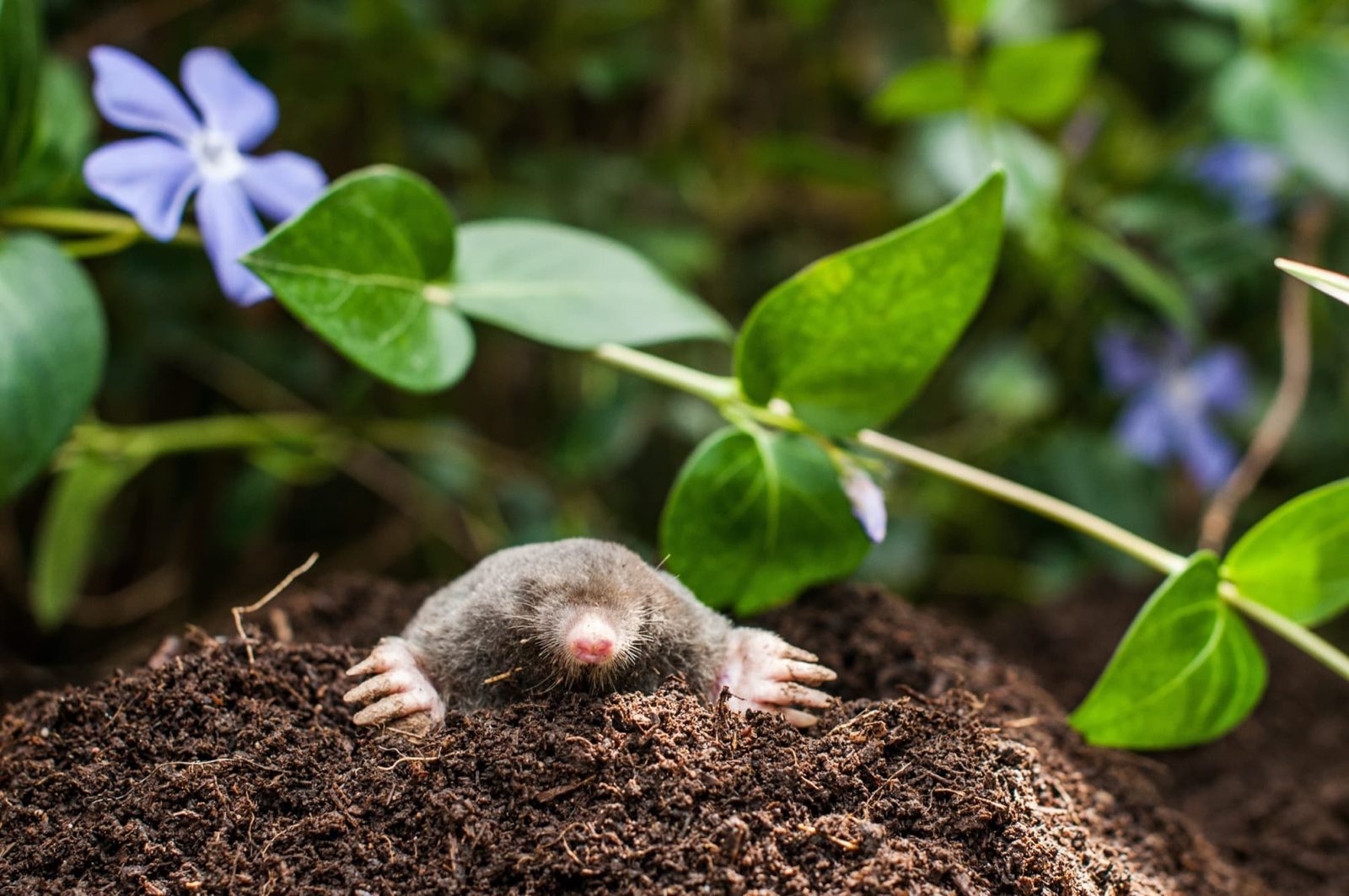 Though rarely seen, moles are undoubtedly skilled at making their presence known.

Those volcano-like mounds of soil that erupt across a lawn can be the bane of many gardeners’ existence.

While moles are rather shy creatures, they can do extensive damage to the aesthetic of your garden and leave you feeling more than just a little bit frustrated.

If all this sounds familiar and you are desperate to get rid of moles in your garden, then this article is for you.

We’ve put together everything you need to know about how to keep your garden protected from these pesky pests, and to keep things looking less like a building site and more like a beautiful, natural haven.

One of the first things you need to do is make sure you know your enemy; this will help you to be more effective at ridding your garden of these chaos-inducing critters.

Moles are small, burrowing, carnivorous mammals that have adapted to live comfortably underground.

They dig out complex systems of tunnels and chambers, and feed on invertebrates found during their excavations. [source]

The famous molehills are formed when the mole throws out the excess soil from its tunnels.

Although the molehills are indeed unsightly, it is worth mentioning that the excess soil is perfectly sifted and can be a brilliant base for potting compost.

Their underground activities also aerate the earth, leading to much healthier grass, and they also sometimes dine on plant-damaging pests like slugs and snails.

However, if the benefits moles bring doesn’t outweigh the eyesores they create, then we have put together all the options you can try to remove these dastardly diggers.

Signs of a mole problem

Before you do anything, you need to be sure that the issue you are facing is definitely caused by moles.

Moles leave unmistakable traces of activity, and these may include:

How to get rid of moles in the garden

Once you have established that your garden is definitely under threat from moles, then it’s time to choose your course of action.

There are lots of methods to either deter or completely eradicate moles, so let’s dig right in.

Moles are famously short-sighted, but they have a very acute sense of smell and hearing. [source]

One of the best ways to send moles packing is by laying something with a strong, foul smell in their tunnels.

We recommend choosing something biodegradable to avoid damaging your garden or killing garden-friendly animals.

Some people also swear by sprinkling tobacco, powdered red pepper, or coffee grounds, so it’s worth having a little experiment to see what’s most effective.

Moles are really sensitive to noise, and they will not want to stay in an area that has frequent loud sounds. [source]

Placing one or more radios in their entrance and exit tunnels on a station with loud, boisterous music will put those moles off from sticking around.

Also, encourage your kids or grandchildren to play loudly in the garden – they will undoubtedly be happy to oblige.

Setting up swingball or some mini football matches will make your garden a lot less welcoming to your furry unwelcome guests.

This option is only possible if you are laying new turf, but if that’s something you are doing, then this is a brilliant, environmentally friendly method to prevent moles from entering your garden.

Mole netting can be bought at garden centres and online and is reliable and long-lasting.

You should place the net at a depth of around 10cm before sowing the grass or, if you are using roll-out turf, you can set the netting directly below that.

If a mole then tries to dig through your garden without success, it should, in theory, leave your garden permanently.

As mentioned, moles detest loud noise, so some products have been specifically designed to drive moles away.

Most of these products produce a low-frequency vibration or sound that repels moles without causing harm to other animals or your garden.

For these to be effective, however, you will need to make sure you have enough set up around your garden; otherwise, the mole will just move to another, quieter part of your property.

There are various mole repellent products which primarily do the same thing.

They essentially release smoke and castor oil fumes, and this is said to infiltrate the tunnels and ward off worms and other tasty mole snacks.

The hope is that this will send the hungry mole further afield to a place where he can find food, but it’s worth mentioning that this is really only a temporary solution.

What’s more, the mole may well leave your garden, but it may then head straight for your neighbour’s property resulting in potential disagreements and neighbourly disputes.

If you are keen to use a more natural repellent, then it’s worth planting some vegetative barriers.

There are several plants believed to deter moles such as daffodils and marigolds.

Daffodil bulbs are toxic, and so it stands to reason that moles will avoid these. [source]

Marigolds are aromatic, and it’s thought that, like castor oil, its pyrethrins repel worms and other soil-dwelling mole delicacies, sending the hungry mole to look elsewhere for food. [source]

Sadly sometimes simply repelling moles just isn’t enough and if you’ve tried all of the previous options, then it may be time to consider setting traps.

There are various traps available and, when used correctly, they are considered a humane way to exterminate moles.

Mole traps should be placed about 10-20cm below ground level but not directly below the molehills.

You can brush away the soil from the mound and use a stick to ascertain where the tunnel is.

You should then carefully open up the tunnel whilst creating as little disturbance as possible and place the jaws of the trap so that it aligns tightly inside.

Set the trap, then carefully cover it, either with a bucket or a piece of turf or anything that will block sunlight from shining through.

These traps do not require any bait and you should check them at least once a day.

It’s common for the mole to push soil into the trap unknowingly, and if this is the case, the trap will require resetting.

It is important to mention that although this will solve your current mole problem, the vacant tunnels are likely to attract more moles and you may have to repeat the process.

There are also live traps available, and if you are opting for these, you must check them twice a day; otherwise, the mole may starve or even die of stress before you can safely release it in its new home.

Entrapped moles should be released at least one mile away from where they were captured, and you must also make sure you have permission from the landowner to release it there.

Also, ensure that the environment in which you are releasing it to is one that can sustainably support the mole.

Probably the most sure-fire way to rid your garden of moles is to bring in a professional.

Usually, the expert will use toxic pellets that emit gases that will result in the death of the mole.

That said, this is quite an expensive option and should only be considered if all else fails.

Furthermore, as with setting your own traps, it provides no guarantee that a new mole won’t make its home in your garden.

Don’t make a mountain out of a molehill

We hope this article has given you all the knowledge you need to help you towards making your garden a mole-free zone.

When all is said and done, aside from the disfigurement they can cause to your lawn, moles really aren’t the worst pests you can come across, and we implore you to use humane tactics before going straight in for the kill.

It can take time and patience to find the method that works best for you, so try out the natural methods first and take it from there.

We wish you luck on reaching a resolution with your new, troublesome, furry neighbour and to reclaiming your lawn once and for all.