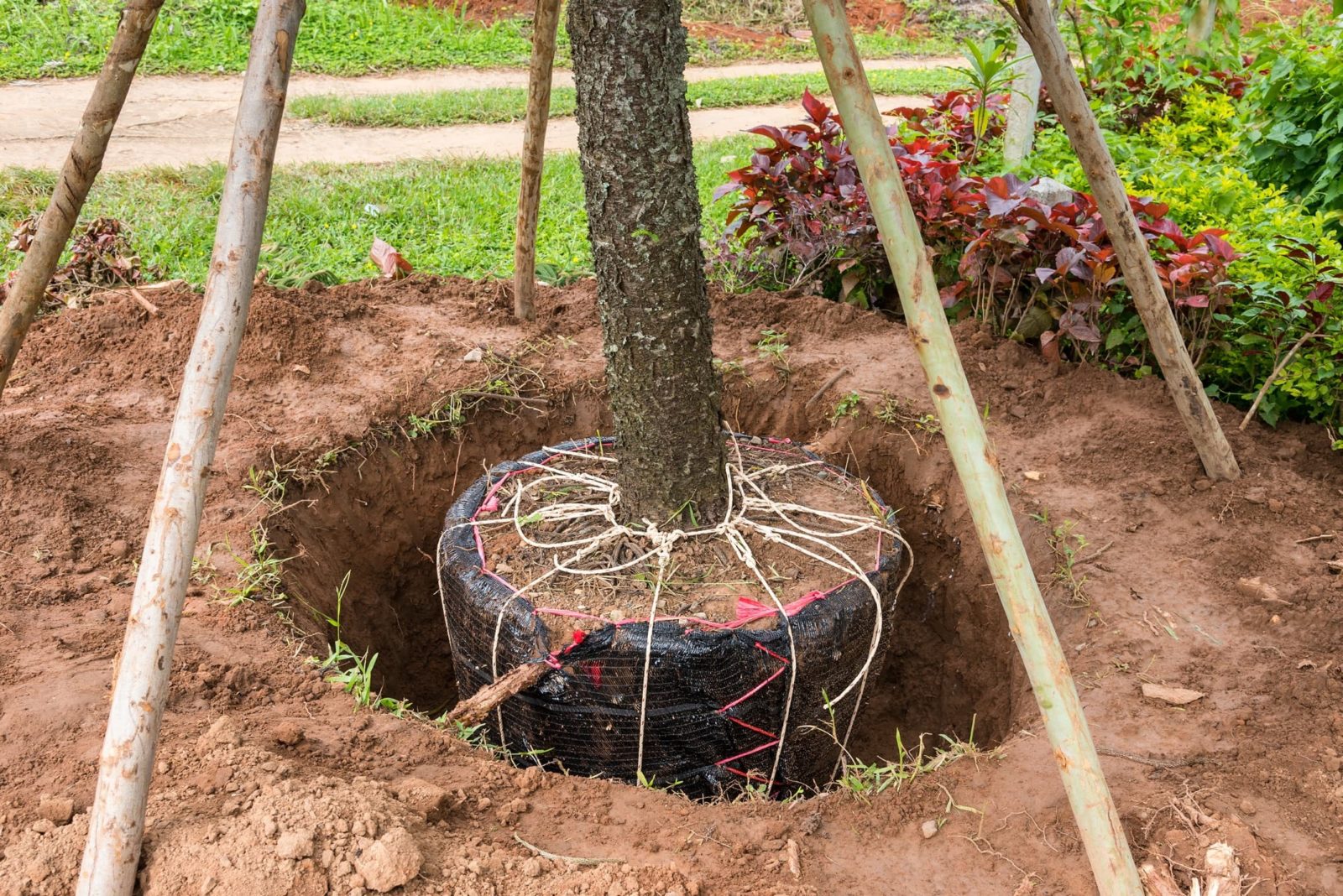 The time sometimes comes when a tree in the garden needs to be moved.

This guide will show you how to potentially go about, what to consider regarding the type and age of the tree to be moved and when to call in the experts and the machinery.

When transplanting a tree some degree of stress to it is inevitable, but through taking some precautions and planning ahead, the stress and potential shock to the tree can potentially be reduced.

Why Move a Tree?

Trees sometimes need to be moved for a variety of reasons.

Trees can sometimes be planted without too much thought with regards to how big they may eventually get and thus transplanting the tree could be more favourable than simply felling it.

However, when thinking about moving a tree it is important to remember that moving an established tree has a certain degree of risk associated with it. Even with the best care when moving and after, there is no certainty that the tree will survive or thrive again.

As a general guideline, it is often agreed that a tree younger than 5 years old will have a much better chance of surviving being transplanted, than one which is older.

However, do bear in mind that some trees can be much more resistant to being transplanted, such as magnolias.

When considering whether to move a tree or not, it is wise to bear in mind the weight of the tree and its root ball and if it can be moved without help or machinery.

For any tree over several years old, we’d strongly advise obtaining advice from an arboriculturist first.

When to Move a Tree?

The most favourable time to transplant a tree depends on the variety.

For deciduous trees, the best time to move them is when they have lost their leaves and are dormant, typically anytime between November to early March, here in the UK.

Evergreen trees can be fussier about being transplanted and the optimal time to move them is either in October or in March as spring arrives and the soil begins to warm up.

However, it is best not to transplant a tree, young or old, when the soil is either frozen or waterlogged. It is far better to wait until more favourable conditions allow.

How to Move a Tree

If time allows, the preparation of moving a tree should begin a year in advance of moving it.

Start by digging a trench, 30cm wide and deep around the tree, approximately under where the branches finish spreading out.

Remove the soil and fill the trench with sand. This process (even though it sounds severe) will sever the roots and encourage fibrous roots to form within the trench, which will encourage establishment once transplanted.

This is also a good time to prune out any dead or diseased branches, which may make the move more manageable.

The following year, plan to move the tree according to its variety and water well a couple of days prior to transplanting.

For the best chance of a successful move, transplanting needs to be as quick as possible, ideally the same day. However, if this is not possible, it is recommended to wrap the dug-up tree’s root ball with sackcloth, water well and keep out of direct light until it is possible to replant.

Before digging up the tree to be moved, it is necessary to prepare the new planting site first, which from experience can often take longer than thought!

To prepare the new site, dig a hole 30cm wider than the estimated root ball width and to a depth of at least 30cm.

Loosen the soil at the bottom and sides of the hole with a fork, which will encourage the roots to grow.

Before lifting the tree, it can be helpful to gently tie the branches of the tree together.

Start by digging down and under the tree from where the trench was previously dug, aiming to extract as much of the root ball as possible in one piece.

Some roots may need to be cut, as cleanly as possible with a sharp and disinfected pair of secateurs or pruning saw.

Once the root ball is free, carefully lift the tree onto a tarpaulin ready to move. It is often easier, not to mention safer, to involve an extra pair of hands at this stage of lifting and moving the tree.

Carefully lower the tree into the previously prepared new hole, checking the roots have enough room to spread freely.

The planting depth needs to be the same as it was previously, as any higher or lower can significantly reduce any chances of survival. Placing a bamboo cane horizontally across the hole can prove as a helpful levelling guide.

Gently backfill around the roots with subsoil, firming in to eradicate any air pockets that may form. Backfill the last few centimetres with topsoil, firm in again and water well.

Applying a mulch of organic matter around the base of the tree will help conserve moisture and suppress weeds, but make sure the area around the trunk is kept clear.

Any trees more than a meter tall may need staking, which will prevent against wind rock whilst reestablishing.

Trees that have been transplanted will require more water than normal until established again.

Depending on the conditions, water the tree slowly and to a deep level for the first few months at least and especially during dry or hot spells. However, do not allow the soil to become waterlogged which may encourage the roots to rot.

Do not be surprised if the tree does not appear to put on any new growth for the first year after transplanting, as the tree is just recovering from being moved.

Keep a close eye and come the following spring a general-purpose fertiliser can be applied if required.