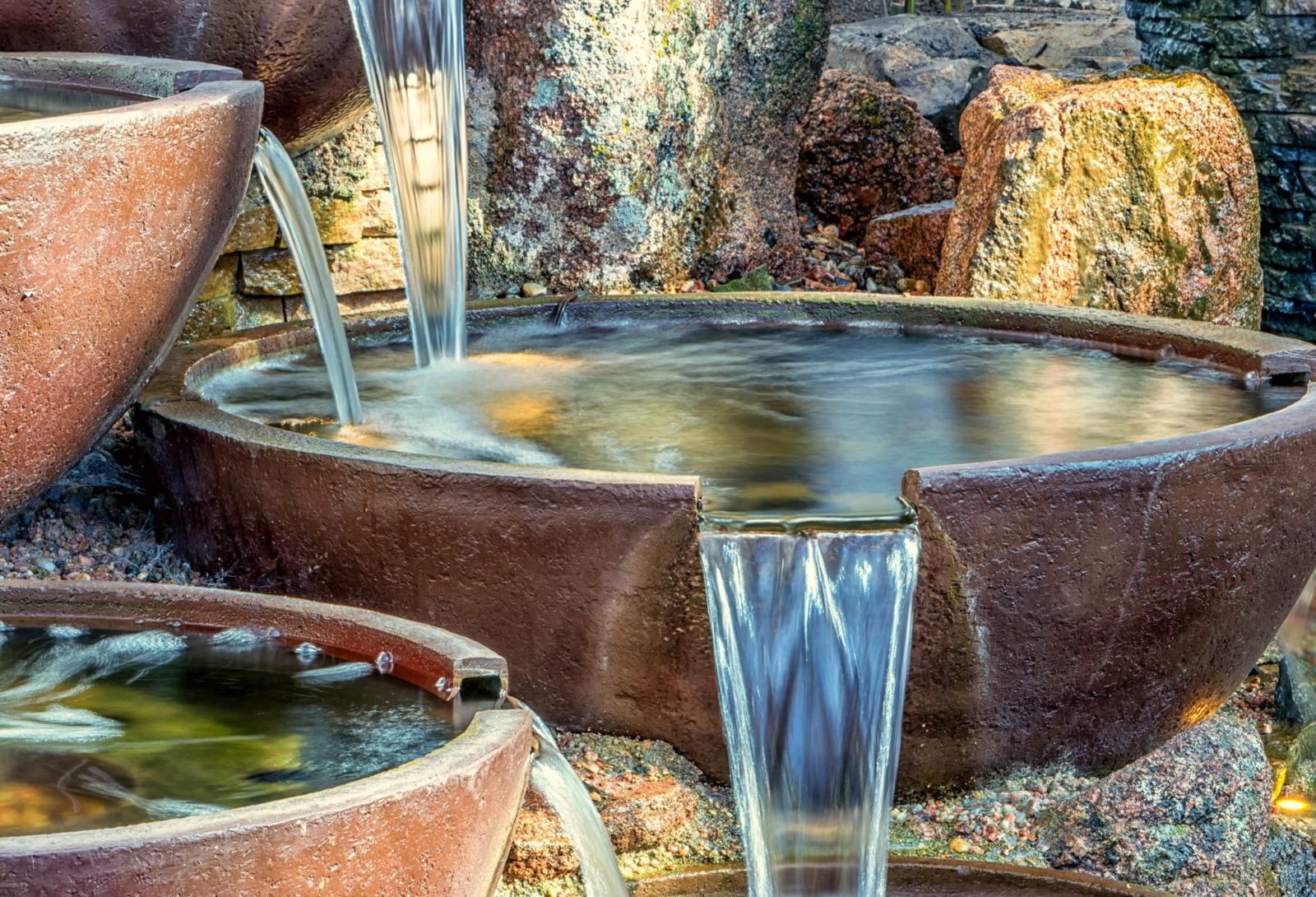 For garden lovers everywhere – and those partial to a pretty patio or decorative decking – solar water fountains are somewhat of a ‘must-have’ these days.

It’s not just that they add to the look of the location in which they’re placed, but that they have a particular function. And that is to soothe. For thousands of years, water fountains have been providing a meditative aspect to gardens, while just being near water can be cooling in a hot climate.

Even today, many people have a solar-powered fountain in their garden or patio area simply for the therapeutic benefit it can offer. And actually, it’s worth mentioning at this point that not all solar water fountains sound the same; some have a faint trickle with others a gushing sound and that’s why, if possible, it’s a good idea to see your chosen feature in operation before purchasing it online.

Solar water fountains are particularly popular due to their environmental aspect – they work by means of storing sunlight – and the fact they are practically free to run (unless you happen to be using the battery option, available with some models).

You will find that solar water fountains come in plain and elaborate versions – as demonstrated by our picks in this article. They range from a simple plastic disc that sits in a pond and consists of a vertical tube and various nozzles, to a tall decorative feature with water cascading through variously angled pots until it hits a barrel at the bottom and could prove the focal point of a garden in its own right.

In this guide we have looked at a range of solar-powered water fountains, taking into consideration their decorative aspect, price, size, type of solar panel, length of the cable and whether or not the solar waterpower has battery back-up. The latter allows them to continue working at night or when the sun isn’t around.

Some of the solar water fountains in this guide are produced from plastic, others are resin-based or have a combination of plastic and iron. Regardless of how they are produced, or how large, one thing is for sure – when working solar water fountains bring immense pleasure to those sitting in the garden and within sight and sound of the water display. And the local birds and other wildlife too tend to be equally keen – many of whom enjoy a regular bath or drink in the home occupant’s garden…

A simple but eye-catching solar water fountain for a modern, minimalist garden

An attractive solar-powered water feature which comprises a sphere (or ball) sitting on the top of the tower-like casing, the Blumfeldt Konigsbrun Fountain is our favourite pick here at Upgardener.

In terms of design, the casing itself comes in a choice of either straight or with a single twist. Reasonably-priced and made from polyresin with an attractive polished basalt appearance, this fountain has been designed to bring a certain charm – both meditative and visual – to any area of the garden or patio, terrace etc. At night an LED light at the centre of the sphere enables it to emit a warm and colourful glow.

The Blumfeldt Konigsbrun Fountain uses a 2W solar panel with a 300cm² photovoltaic surface and can pump up to 200 litres of water an hour. This provides a maximum lift of 80cm for the water, with a fountain height up to 40cm.

Switching to a battery (by touching the on/off label on the tower) gives up to eight hours of use. As well as the solar panel, your purchase includes a water pump, LED ring and 3.7V 2Ah battery.

Water flows from the top of the ball and down its sides to a hidden basin in the tower and where it simply starts again in a continuous motion. Height-wise it’s certainly not too over-powering for a small garden while the design is simple and minimalist for a small, neat garden.

Circular, around one inch wide and flat, this large plate-like fountain has a vertical tube in the centre with a spray nozzle on top. It sits on the water – whether in a pond or birdbath, fish tank etc – and provides a continual stream of water.

Purchasing the Vitcoco Solar Fountain Pump means you will also get the six nozzles and connection head, an adapter and the user manual. Having said that it is very easy to set up. The solar panel in this water fountain is fixed and comes as part of the rounded disc.

The decorative GardenKraft Cascading Barrel Fountain consists of four lotus leaves through which water flows. Each of the leaves is higher than the one before and set at a slight angle. The base is a barrel shape while on the top leaf sits a replica fish with its tail flipped upwards.

In the centre of the bottom leaf sits a small replica water mill wheel. Overlooking all of these is a tall fixed solar lamp post with LED lighting. In other words, there’s no need to fuss around looking for a spot to sit a solar panel.

The total height of the fountain is 90cm and it is 41cm in diameter. In the box, you’ll find a 2.55-metre cable and high-pressure water pump. The actual item is produced from plastic and iron and painted so that the container appears to be either wooden or metallic.

The GardenKraft Cascading Barrel Fountain is one of the more elaborately ornamental fountains we’ve featured here and won’t look out of place in a packed and ‘busy’ garden, sitting amongst a flower bed.

A garden feature in its own right, this solar water fountain will always elicit comments from visitors

The Earthenware Solar Cascade with Battery Backup and LED Lights by Solaray is an attractive modern-day version of the traditional water bowl cascading fountain. The lights illuminate the fountain from below once it’s turned dark in your garden and the solar switches into action. The bowls – which sit on a metal wire slightly above and at angles to one another – are finished in a blue glaze to further add to the attractiveness of this four-layered garden ornament.

The water fountain works by means of the pump allowing water to flow to the top dish and then slowly cascade down through the other dishes before sitting in the bottom bowl.

The height of the Earthenware Solar Cascade is 55cm and it’s 32.5cm wide. The cable which links the fountain and separate solar panel is five metres long.

Unlike the other fountains featured, this item will switch itself off after running for three hours a day. It can be reset, however, by simply pressing ‘on’ again.

Attractive and decorative, the Gardenwize Lion Head Stone Water Feature is certainly an eye-catching addition to any garden. Water pours from a lion’s mouth into a bowl and which then cascades into a taller bowl alongside. The tall, rectangular structure itself is 56cm high, 30cm wide and 19cm in diameter. In other words, it’s not too large so would also fit well into a small patio or verandah.

The Gardenwize Lion Head Stone Water Feature comes with a rechargeable separate solar panel while the structure itself is shaped from waterproof resin. The original colour is sand but the water fountain can be repainted any shade to match – or clash with – its surroundings.

How Do Solar Water Features Work?

In a nutshell, solar water fountains work by means of harnessing energy from the sun. They capture and store this energy by means of a photovoltaic panel in which solar cells convert the sun’s energy into electrons which then provide the power to spark the water fountain into action.

This, of course, begs the question: will it work when there’s no sun? Happily, the fountains can also work when it’s daylight. And, if the sun is strong enough through the day will have plenty of energy to work at night too. The strength and duration of sunlight the fountain receives (and therefore the energy it manages to store up) depends on where the fountain – or its solar panel – sits. Some solar water fountains have the solar built into the actual feature itself, while others have a moveable solar panel which can be situated on the ground or hung on a fence etc in order to have the best chance of sunlight.

A solar water fountain won’t work, for instance, if it has an internal solar panel and is pitched in a dark corner. But if it comes with an independent solar panel then you can pitch the feature wherever you like, provided it is linked to the solar panel.

A solar water fountain in a hot Mediterranean country such as Spain or the South of France will obviously work better than one in colder climes where there is very little sunlight or even daylight (ie Finland in winter). In order to combat this, some solar water fountains provide battery power as a back-up.

The science of solar-powered technology

The photovoltaic solar panel made from a type of silicon absorbs light photons made from the sun produced by the sun. These combine to form a moving electrical circuit.

The solar panel consists of two joined-up layers. The first has the electrons which then jump to the second layer, triggering other electrons to jump at the same time – and so the electrical circuit is formed. This provides the power for the fountain to start working by means of circulating the water.