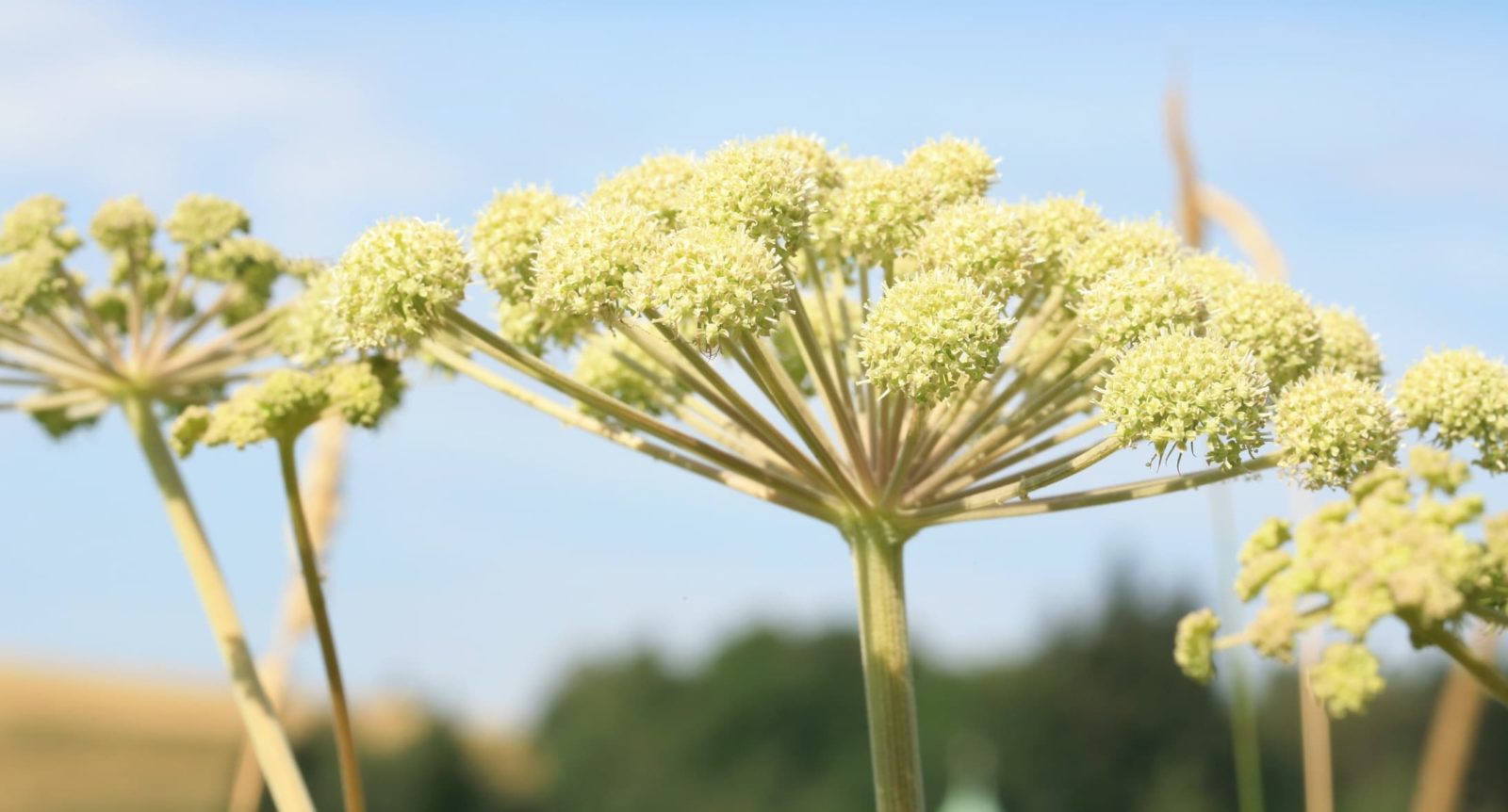 Angelica is a useful herb to grow in your garden, and is great for a low maintenance scheme.

This woodland edge or hedgerow plant is common in the ‘wild’ but can also be grown in gardens, where it can bring a huge range of benefits.

This is an attractive plant in a wilder and more relaxed garden scheme, but besides its appearance, there are many more reasons to grow angelica in your garden.

Read on to learn more about different types of angelica that you might grow in your garden, why it is such as good idea to include these plants in your garden, where to grow them, and how easy they are to care for in the right setting.

Native to Europe and naturalised in the British Isles, Angelica archangelica (garden angelica) is a biennial plant which is hardy throughout the UK and which is not frost tender. This is the plant most commonly referred to when people talk about angelica.

Angelica grows up to 1.5m to 2m in height, and spread to create bushy clumps around 1m in diameter. It bears umbels of light yellow flowers in the early summer.

There is also another useful species within this genus, Angelica sylvestis, or wild angelica, which could also be a useful addition to your garden.

Technically, both of these species are biennials. However, they can be perennial if they are prevented from going to seed. And since you can harvest angelica for a range of uses prior to seed formation, this maintenance can be minimal and as easy as can be.

There are also other non-European native Angelicas to consider.

One that is commonly grown in a garden is Angelica gigas, for example. Also known as Korean angelica or giant angelica this is an attractive ornamental, with large purple flower umbels.

There is also the East Asian Angelica edulis, with white flower umbels, and North American native Angelica atropurpurea, which has purple stems, to give just a few examples.

Both garden angelica and wild angelica have many culinary uses.

Garden angelica’s leaves are eaten raw or cooked for a liquorice flavour in salads.

They are also used as a mild natural sweetener, often alongside tart fruits or in jam-making.

The peeled stalks, best harvested in spring, are often crystallised and used in cake decoration and confectionary. You can also use the stems like celery in savoury recipes, or to sweeten fruity desserts.

An essential oil from the roots and seeds of this plant is used in flavouring food, and the seeds can be used as a flavouring in liqueurs like Chartreuse.

The Sami people also use this plant to make their traditional flute-like instrument, the fadno.

Though it does not have quite as many culinary uses, Archangelica sylvestris is also edible.

The somewhat bitter young shoots and leaves can be added to salads or used as a vegetable. The stem and leafstalks are also sometimes used in candies and confectionaries.

Both of these Angelicas are excellent wildlife-friendly plants and bring a wide range of beneficial pollinators and other insects to your garden.

Other ornamental angelicas like Korean angelica do not have as many uses, but they can attract beneficial wildlife, and can make good cut flowers.

Where to Grow Angelica

Garden angelica will grow in dappled shade below trees, or in full sun.

Wild angelica can also grow in similar conditions, though it is more shade tolerant and can cope well even in areas of somewhat deeper shade.

Angelica can be grown:

It is best to choose a sheltered spot, to avoid the need for the staking that is required in windy conditions, and to avoid any really hot or dry locations.

It works very well alongside other herbs which like similar conditions, like Alexanders, rue, meadowsweet, sorrels and herb patience, for example. Dill should not be grown close by.

Angelica’s ability to attract pollinators and predatory insects like lacewings and ladybirds makes it a great companion for a wide range of annual and perennial crops.

Angelica seeds are usually sown in a cold frame or other undercover area immediately once they are ripe, in late summer or early autumn, since the seeds typically only remain viable for a short period of time.

You can also direct sow angelica seeds where they are to grow as soon as they are mature.

The seeds can also be sown in spring but germination rates will tend to be lower at this time of year.

One key thing to remember when sowing angelica is that the seeds need light for germination. So it is very important to place seeds on the surface of the soil or growing medium and to barely dust them over, or to leave them uncovered.

Bury them too deeply and they may not germinate at all, or germination rates will suffer.

If you are not direct sowing, once the angelica seeds germinate, and the seedlings are large enough to handle, they should be pricked out and potted up into their own pots.

You can place these in a cold frame, polytunnel or unheated greenhouse, and watered to maintain moisture, but not overwatered over the winter months.

These young angelica plants should then be planted out into their final growing positions in the spring.

It will be perennial if not allowed to go to seed in its second year, and if you do decide to let it go to seed (which can be beneficial for the birds who like to eat them) then this is a plant that can self-seed readily – sometimes even so readily that it becomes a nuisance.

Young angelica, especially while growing in pots and not in the ground, should be well-watered when grown undercover or during dry spells outdoors.

Even mature plants should be kept well watered if rainfall is not sufficient, as dry conditions can increase the chances of diseases like powdery mildew taking hold.

As long as it is grown in fertile soil, Angelica should not need additional fertiliser. Add a mulch around your plants to maintain fertility and retain soil moisture over time.

Aside from powdery mildew, which can be a problem especially in dry conditions, Angelica is rarely troubled seriously by pests or disease.

Look out for slugs and snails when the plants are still young and protect them where necessary.

Later, angelica attracts aphids, but since it also attracts those creatures which prey on aphids, like ladybirds and lacewings, this issue will usually balance itself out in a healthy garden and the angelica will help you keep the beneficial wildlife around and the ecosystem in equilibrium.

Harvest the leaves and stems in the spring, while they are still young. Usually, these should be harvested before June.

Mature angelica plants in their second year can be cut back to the ground and dug up to make new plants in autumn.

Divide the roots with a sharp knife and repot or replant the divisions right away where they are to grow.

As you can see from the above, angelica can be a great choice for a productive, attractive, low maintenance and wildlife-friendly garden.