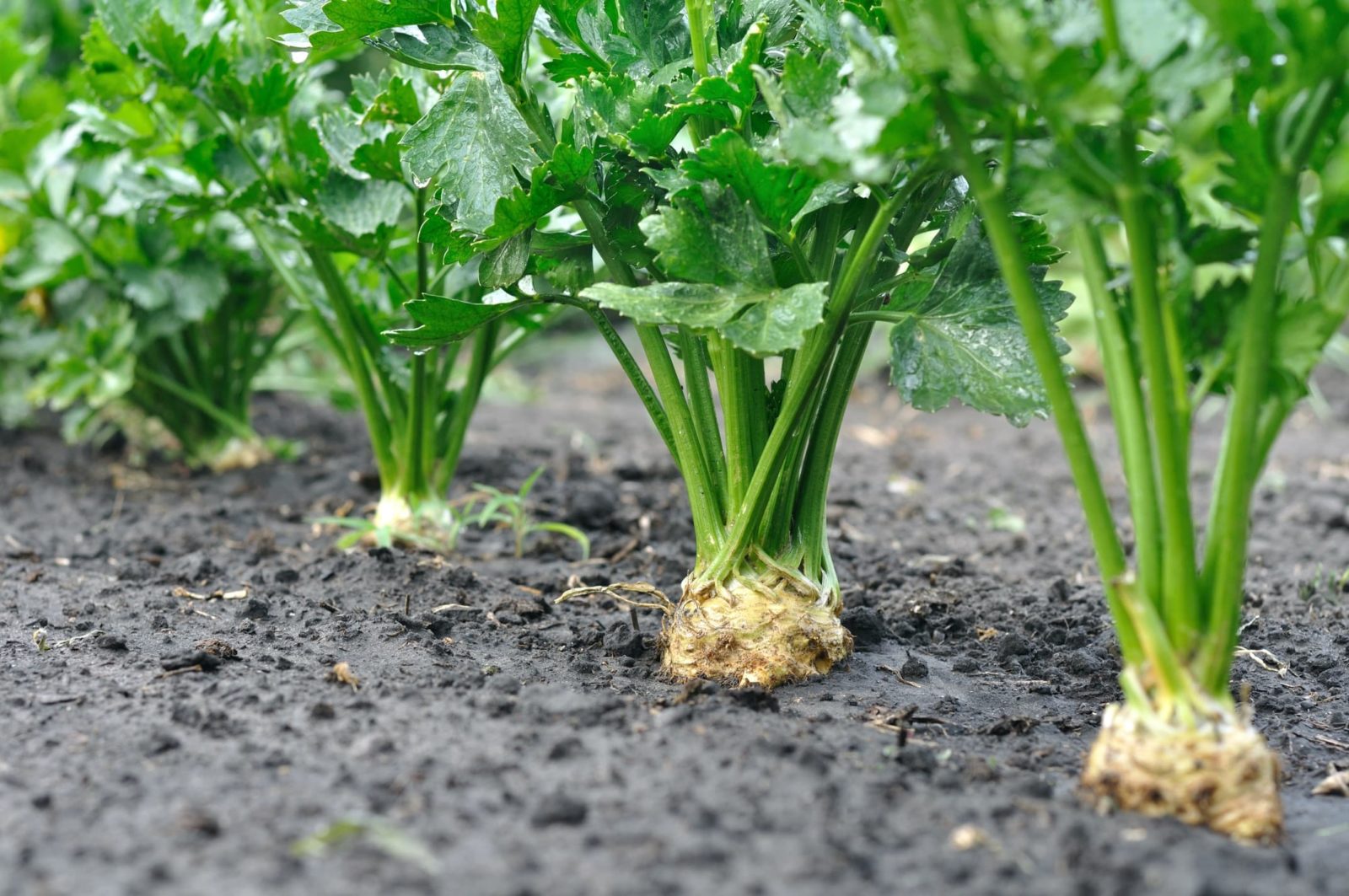 Celery is not necessarily the easiest crop for novice gardeners to grow from seed, but it can be a great addition to a kitchen garden.

Whether you eat it raw, in a salad, or cooked in soups and other meals, this is a useful vegetable that can be great to add to a home growing repertoire.

Read on to discover how to select the right varieties, where to grow it, and what with. And learn everything you need to know to grow, care for, and harvest your crop.

The celery that you can grow in your garden are cultivars of Apium graveolens.

This is a plant that naturally grows in marshy ground, which has been grown as a vegetable since ancient times.

The long fibrous stalks of the plants are the part most commonly eaten as a vegetable.

The leaves at the ends of the stalks are also edible, though stronger tasting, and are often used as a pot herb.

And celery seed is also sometimes used as a spice. The ground seeds and mixed with salt to yield the seasoning ‘celery salt’.

Celery salt can also be made from root extraction, or the dried leaves.

Celery is a biennial crop. It will usually flower and set seed only in its second year. But it can bolt, and prematurely set seed when grown as an annual crop – the reasons for which we will discuss a little later in this article.

A related species, Apium graveolens var. rapaceum is a different vegetable known as celeriac, which is grown in the UK and across Europe for its large edible bulbs, rather than for its stalks or leaves.

Celery is usually an easy crop to grow (with the right knowledge) and a great inclusion for a home-grown vegetable garden.

One thing to note is that while celery can be rather challenging to grow from seed, it can also be regrown from the base of a stem, which is a quick and easy way to get started with growing your own. We’ll cover both growing from seed and regrowing from the base in this article.

Celery can grow well alongside many other plants typically grown in a kitchen garden. So where the right  conditions can be provided, it can add to the biodiversity of your beds and be a key component of polyculture organic garden schemes.

As mentioned above, growing celery from seed can be somewhat challenging. The main issue is that the seeds can be rather slow to germinate, and are also somewhat fussy when it comes to the environmental conditions required for germination to take place successfully.

Seeds are typically sown between mid-March and early April. They can be direct sown where conditions allow, and in undercover growing areas of with protection. But it is best to sow them indoors or under cover, in seed trays, modules or pots. Direct sowing reduces the risk of transplantation shock, but starting in trays, modules or pots makes it much  easier to make sure that the necessary conditions for germination are met.

Celery can germinate from a minimum of 4 degrees. But when seeds and seedlings experience temperatures below around 10 degrees C. then can be more likely to bolt later in the season. The optimal temperature range for germination is between 15 and 21 degrees. Hold off sowing until these temperatures can reliably be maintained. Bear in mind that germination can take some time, and seedlings may not emerge for 2-3 weeks.

Seeds must be sown on the top of the growing medium, with just a very thin sprinkle of sieved compost or potting mix on top.

And moisture is very important. The compost/ potting mix must be consistently moist for germination to take place. And must remain moist  as seedlings emerge. Mist carefully to make sure moisture is maintained without damaging the tiny seedlings when they appear.

Once seedlings emerge, wait patiently until they are large enough to handle, which is usually when they have several true leaves. Then carefully prick out each one and place them into their own individual pots or modules to grow on. Then harden off and transplant celery into growing areas or your garden once the weather is reliably above at least 10 degrees C.

Any shocks or chills during the early stages of the life of your celery. Any issues will make it far more likely that the celery plants will bolt.

If you are a novice gardener, you may find it challenging to grow celery successfully from seed. If you are looking for an easier option, you should know that you can regrow celery stalks from the base of a celery that you have bought.

Place the base of the celery in a shallow bowl or saucer of water, and wait for roots to appear. After the roots have formed, new growth will emerge from the top of the base. You can keep refreshing the water and keep the celery in the water, or replant the celery with its new roots somewhere suitable in your garden.

Where to Grow Celery

Celery can be grown in containers, in raised beds, or in the ground, as long as suitable moist conditions can be provided and maintained. Water is the most important thing when caring for celery, so it is important to choose to grow it somewhere where adequate moisture in the growing medium can be maintained. Remember, the wild celery from which modern cultivars were derived naturally grows in marshy conditions.

Celery will thrive in full sun, in a humus-rich and moisture retentive yet light and open soil or growing medium. It is unfussy as to soil pH, however, and can thrive even in more extremely acid or alkaline conditions.

It is important to prepare a growing area well before planting out celery, which you will usually do some time between late May and July.

Celery is said to have a repellant effect on brassica pests like the cabbage white butterfly. So it can be beneficial planted alongside members of the cabbage family.

Avoid planting celery alongside carrots and other umbellifers, as these will be too much in competition with celery plants.

Water is the most important thing with celery – this cannot be stressed enough. Make sure you water well and consistently throughout the growing season, and never allow the soil or growing medium to dry out.

When preparing a growing area for celery, you will need to consider whether you have chosen a self-blanching variety, or will undertake work to blanch the stems as the plants grow. Trenching is one common method for growing celery that will be blanched.

It involves preparing a trench that is around 35-50cm wide and 30 cm in depth. This trench is filled with organic matter (in autumn, or in early spring). Celery is then planted in a line along this trench, at a spacing of around 20-25cm. Then, when the stems are around 30cm tall, earth is mounded up around the stalks a bit at a time so just the tops are left exposed. Alternatively, cardboard collars can be used for blanching.

Self blanching varieties will not necessarily require this treatment. These types are often sown in blocks, so plants shade one another, which is enough to create the pale and tender stalks desired.

It is a good idea to mulch with a nitrogen rich mulch once the celery is established. Mulches will not just add fertility but also help retain moisture and suppress weeds.

If you are growing celery in containers, you should also feed every couple of weeks with a compost tea or other balanced, organic liquid plant feed.

Celery is typically harvested between August and October, and lifted before the first hard frosts. Though trenching (or growing with protection in an undercover growing area) could allow you to string things out as late as mid-winter.  You can begin to harvest as soon as the plants are large enough, simply by cutting off the stalks at the base with a sharp knife.