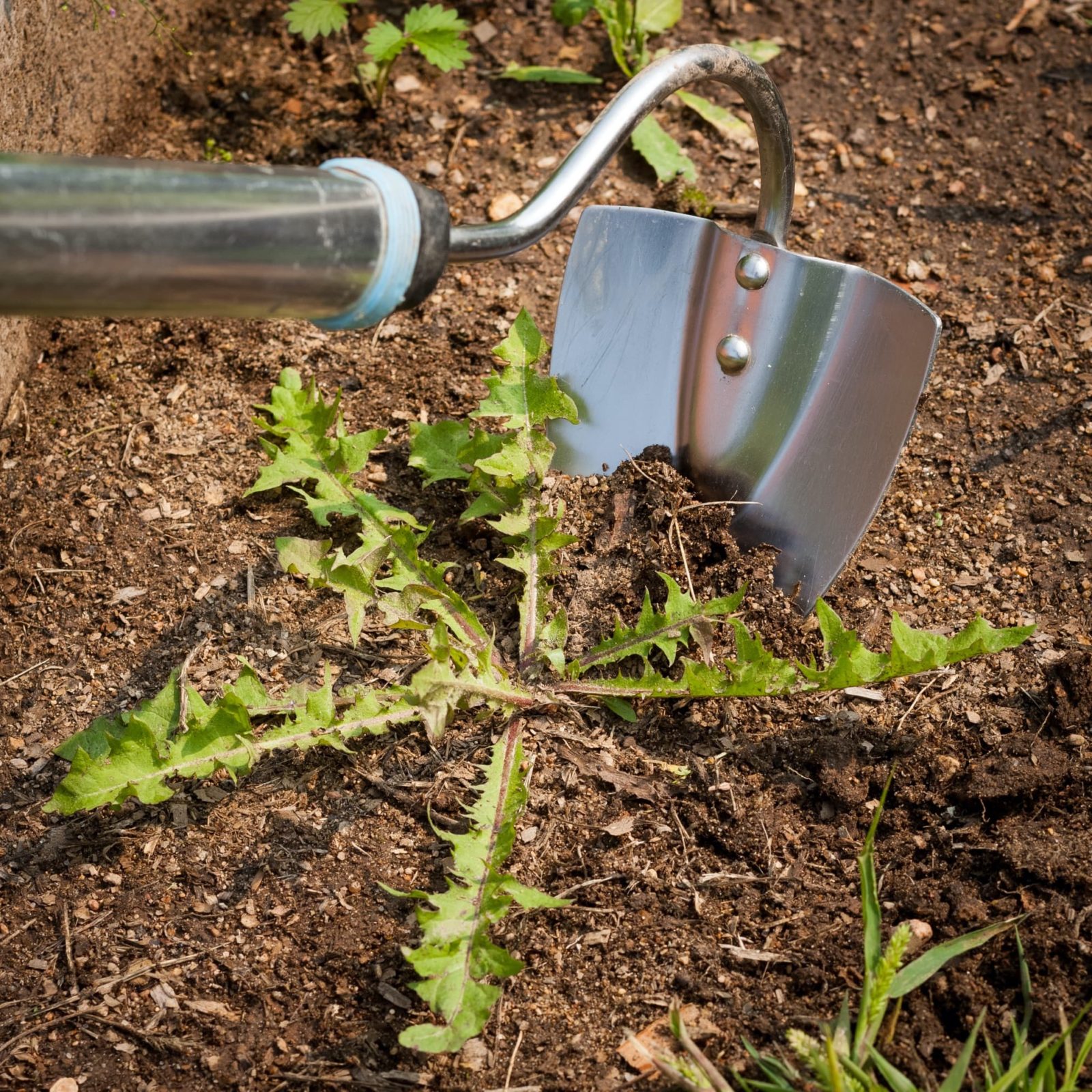 No matter how the size or style of your garden, or whether you are a novice or seasoned gardener, there is one thing that unites us all: the battle against weeds.

While some weeds can be aesthetically pleasing to the eye, for the most part, they are a nuisance and seem hell-bent on choking out and destroying our prized and precious plants.

While there are some preventative measures you can take, as a gardener, it is wise to accept that weeds are an unavoidable part of gardening.

Dealing with weeds can be a frustrating, laborious and often daunting task and trying to tackle them can feel overwhelming, to say the least. However, there are a number of things you can do to make this undesirable job more manageable, and the most important one is identification.

Successfully identifying weeds can help you understand exactly what you need to do to get rid of them. In this article, we will introduce you to the most common weeds found in gardens in the UK because, in the world of weeds, knowledge is power.

Simply put,  a weed is a plant in an undesirable location. The oxford dictionary defines it as “a wild plant growing where it is not wanted, especially among crops or garden plants”.

It is also worth noting that not all weeds are “bad”.  Many plants widely regarded as weeds are also grown intentionally because of the benefits they provide. Beneficial weeds are invasive, usually non-domesticated plants, that can provide protection or other benefits to plants, contribute to soil health or have ornamental value.

For the most part, however, weeds are an absolute pain in the bum for us gardeners and need to be controlled and/or completely eradicated from our gardens.

Uncontrolled weeds can interfere with our gardens, and our lives, in a variety of ways including:

There are three main categories of weeds in regards to the characteristics in which they grow, and these are as follows:

Biennial weeds have an average life span of two years; they germinate and form rosettes in their first year and produce flowers, fruits and seeds in their second year before dying out.

Perennial weeds are the beasts that return year after year. They usually produce long taproots, as well as seeds, and are generally the hardest weeds to control.

Types of common weeds found in the UK

Now that you have a nice clear understanding of what weeds are and what they are capable of, the next step is to learn how to identify them. We have put together a comprehensive list of all the weeds you are most likely to encounter in your garden as well as some tips and tricks on how to expel them. So let’s get started!

Topping our list of weeds are nasty nettles. There are both perennial and annual types of nettles which both grow in clumps, reaching up to 1.2 metres in height. Perhaps one of the most easily recognisable weeds, they can quickly engulf borders and can also give unprotected skin a jolly nasty sting.

Perennial nettles have creeping roots and are particularly troublesome in loose, newly cultivated soil, where they can quickly steal much-needed water and nutrients from other plants.

The annual types of nettles do not have long-lasting roots; however, they do produce a prolific amount of seeds from a young age and can wreak absolute havoc in vegetable gardens.

The good news is that nettles can be controlled by weedkillers which should be applied when the plant is in vigorous growth. You can also dig the entire plant out of the ground – be sure to wear gloves – and young seedlings can be removed by hoeing.

It is worth mentioning, however, that nettles are a vital food source for British butterflies, so if you have a patch of them that isn’t interfering with your garden, you may wish to leave them be.

Before we go into the reasons why docks are such an annoyance for gardeners, we should first point out that, if you have been stung by our previous weed, dock leaves contain alkali which neutralises the venom, so credit where credit’s due, they aren’t all bad.

That said, once established, they are more of a pain than a stinging nettle sting! Easily identified by their broad leaves and distinctive seedheads, docks are one of the most common weeds found in the UK and are bloomin’ hard to eradicate.

Docks have a thick, branched taproot which can grow up to 90cm in length and can regrow if damaged. They also produce seeds in abundance which germinate easily and can also remain and survive in the soil for 50 years.

The trick with docks is to try digging isolated specimens out. Only the first 12-15cm of rootstock has the power to regenerate so if you remove that successfully there should be no regrowth. Docks are most vulnerable in spring, so that’s the time to tackle them.

Dock seedlings should be sprayed with weedkiller, killing them off before they have a chance to establish themselves.

When it comes to creeping thistle, you are going to want to get on top of the problem fast as, once established, this plant can be extremely difficult to eradicate completely.

Creeping thistle spreads using lateral roots; these roots are brittle and easily reshoot when broken, making this plant a really tricky customer. Uncontrolled thistle will compete with your plants for light, water and nutrients.

The spreading roots of creeping thistle mean that the plant grows in large clumps, producing spiny leaves and flowering stems which can grow up to 1 metre in height. The dark, purple flowers, typical of the thistle family, bloom from July to September.

The best time to combat thistles with weedkiller is when they are growing vigorously but haven’t begun to flower. Digging up thistles can cause problems as they can easily regenerate when roots are broken.

With a widespread, overgrown thistle problem, digging the plants out could take many seasons. You will need to weaken the plant by cutting the top growth over a number of years, which should be done before the flower heads show colour.

Whilst the creeping buttercup does produce rather charming, yellow flowers, beloved by children trying to discern who likes butter, the plant itself is a rather irritating issue for gardeners.

This perennial weed is most commonly found in lawns and borders, or other areas with bare soil. And, where there is moisture, it will grow strong and set deep roots. Creeping buttercup uses deeply penetrating roots to spread – they branch out from every leaf node to form a surprisingly sturdy underground network

To combat creeping buttercups in lawns, you can use a rake in springtime to lift the roots, then use a lawnmower to cut them. Aerate your lawn in autumn will improve the drainage, and reduce creep.

A good old-fashioned trowel will help you dig out fledgeling roots before they have a chance to take hold, too.

Few weeds strike as much terror in the hearts of gardeners than Japanese knotweed. This rapidly spreading plant dies back to ground level in winter but, by early summer, its bamboo-like stems shoot from the ground, reaching heights of up to 2.1 metres.

Japanese knotweed can be identified by its reddish-purple, fleshy shoots and crimson-pink buds which produce white flowers in late summer and early autumn.

This nasty weed can be devastating not only for your garden but also for the prospects of your house if you are hoping to sell it. While it is not illegal to have Japanese knotweed growing in your garden, you are required to control it.

Controlling this weed is no walk in the park. Even if digging out this deeply penetrating plant is possible, it has to be disposed of at a licensed site.

For this reason, if you are experiencing issues with this formidable weed, we highly recommend seeking a specialist to assist you in its removal and disposal.

Couch grass, or twitch grass, is a well-known enemy among gardeners. This trouble maker forms wiry, underground stems, with creeping shoots that pop out of the ground and take control of garden beds.

This perennial weed is tricksy and looks like a normal tuft of grass, but underneath it will be forming dense networks of roots, spreading rapidly and choking the growth of nearby, wanted plants.

For small, isolated infestations, hand weeding can go a long way for couch grass and is best done in the springtime, before it re-establishes itself around bulbs.

Where lawns are concerned, unfortunately, there isn’t a weedkiller that will leave the lawn unharmed. If couch grass has invaded your lawns, you may be better off killing off both the weed and the lawn, dig over the soil and prepare the area for re-sowing or re-turfing.

Whilst there is much fun to be had with this weed, which you can stick to unsuspecting peoples’ clothing, cleavers are no fun for gardeners.

Cleavers can be easily identified by their sprawling stems which can grow to a metre in length. Their leaves are slender, and the plant produces little green-white flowers in clusters from May to August which develop into green or purple fruits.

The problem with this plant is the seeds which are produced in mass quantities of up to 400 per plant. The seeds are easily distributed and can also stay in the soil for up to six years.

Whilst individual weeds are relatively easy to uproot and remove, if allowed to establish, this plant can be a persistent pest. This is a weed you want to hand pull out as soon as it rears its ugly head.

You can also avoid introducing cleavers to your garden by giving your clothes, or your pet’s fur, a good brush down after walks.

Know your enemy and take your garden back

At the end of the day, there will always be weeds and they will always be a big part of gardening. Prevention is the best method but, more importantly, identifying the weed and understanding its growth habits are the best way to stop it in its tracks.

We hope this article has given you the know-how to deal with some of the most common UK garden weeds. The best thing we can recommend when it comes to weeds is to do your research, put your back into and take your garden back!