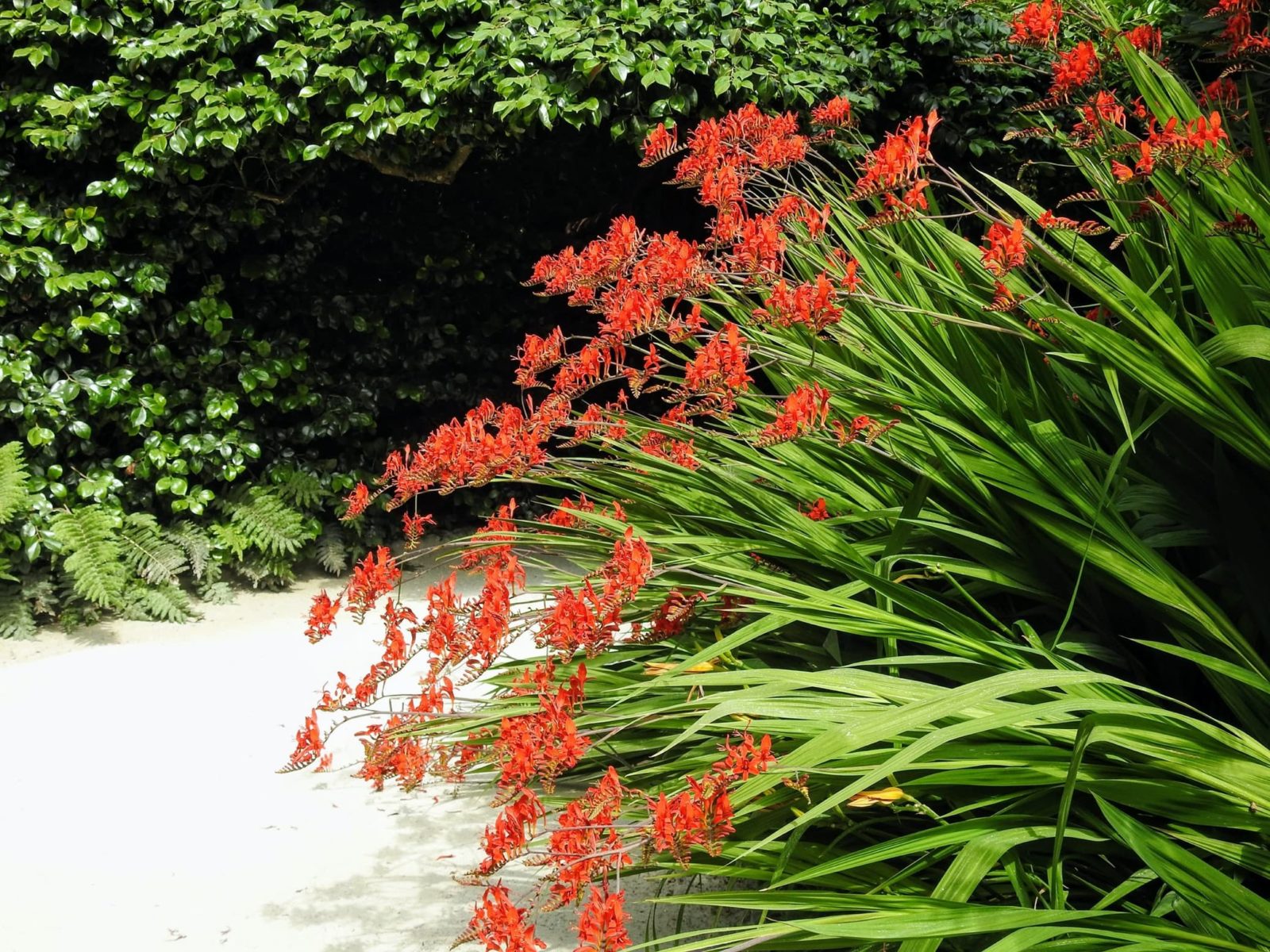 Crocosmia ‘Lucifer’ is the most widely grown variant of Crocosmia – a deciduous perennial with narrow, sword-shaped leaves and vivid tubular flowers.

In the case of the Lucifer cultivar, these flowers are bright red, and the plant grows to around 1.2 metres tall.

C. Lucifer is easy to grow in the UK, as it’s hardy to our climate and can withstand harsh winters and temperatures down to -15°C. The plant doesn’t require pruning, and the ease of growing and reliability of flowering makes it a popular choice for new and seasoned gardeners alike.

It is most often found in flower beds and herbaceous borders, where it complements other flowering plants, and is a great way to add tropical colour to your garden in late summer, once the spring bloomers have come and gone. It also provides attractive, mid-green foliage from spring to autumn.

If Crocosmia ‘Lucifer’ has spiked your interest, then read on for our best care and growing tips, for everything you need to know about how to conjure this devilishly red, pointy-leaved perennial into your garden.

The Crocosmia genus of flowering plants is part of the Iridaceae iris family and is native to southern and eastern Africa. It is a bulb flower or deciduous perennial, and grows in clumps, to a maximum height of 1.5 metres and spread of 0.5 metres. It can take up to 5 years to reach this growth, with flower displays getting thicker each season.

The Crocosmia ‘Lucifer’ is a member of the hybrid cultivar Crocosmia x crocosmiiflora, created in 1879 by Victor Lemoine. It is characterised by narrow, pleated green leaves, which grow erect and in dense clumps, as well as sprays of fiery red flowers – the colour of the devil, which is where it gets its name. The plant flowers during the mid-to-late summer months, typically from July to September.

In total, there are over 400 cultivars in the Crocosmia genus, producing a variety of flower colours, including red, orange and yellow. The name Crocosmia comes from the Greek words ‘krokos’, meaning saffron, and ‘osme’, which means odour, and was named after the strong scent of saffron which is produced when the plant’s leaves are dried.

Crocosmia ‘Lucifer’ is a hardy plant, and will grow in most moderately fertile soil types – including clay, chalk and sand – and most pHs. It prefers its soil moist, but not waterlogged, so you must ensure the ground has good drainage. Add a dry mulch upon planting to help keep the soil moist, but beyond that, you shouldn’t need to fertilise.

Although it can cope with partial shade, Crocosmia will thrive best in full sun, so a sunny spot with limited coverage in an east, south or west-facing garden is ideal. For best results, plant the corms (bulbs) during spring, once the last frosts of winter have passed.

Water your Crocosmia whenever the soil feels dry, from spring to autumn, to make sure it stays moist. This will help the plant to grow and bloom during the flowering season. You should not need to water over winter, although you can add mulch to the soil to help protect the corms from the cold, especially if the temperature falls consistently below freezing.

If growing in a flower bed or border, you should aim to plant Crocosmia ‘Lucifer’ in groups of 12 or more – it grows in clumps, so this will ensure you get a good cover of foliage and display of flowers in the summer. Position the corms approximately 15 – 20cm apart, 7 – 10cm beneath the ground, and at least 50cm away from neighbouring plants.

Your Crocosmia ‘Lucifer’ will most likely need support from bamboo canes or similar, at least whilst it’s growing. As with many plants, it’s also important to keep the area around your Crocosmia free from weeds, to prevent them from interfering with the plant’s rhizomes.

Crocosmia is native to southern and eastern Africa, where it grows on grasslands with moderately fertile soil, and in regions with a predominantly sunny climate and high summer rainfall. That being said, many varieties of Crocosmia are hardy, and can withstand low temperatures and partial shade in hot climates. The ‘Lucifer’ cultivar is a hybrid and is hardy down to temperatures of -10 to -15°C.

Crocosmia ‘Lucifer’ does not need to be pruned. You can remove dead flower heads during the flowering season, by cutting back to where the stems meet the leaves, to encourage new blooms. Other than that, you should leave the foliage alone after blooming, so that the plant can use its leaves to replenish the corms through photosynthesis and get into a good position for flowering again next summer.

When To Cut Back Crocosmia

As stated above, you do not need to prune Crocosmia, other than de-heading dead flowers during summer. You can, however, cut the plant back once its leaves have withered and died in late autumn, in order to make way for new growth.

Where To Buy Crocosmia

Crocosmia seeds, corms and potted plants are available to purchase from garden centres, specialist growers and online retailers. As there are over 400 cultivars, you should make sure to look for the Crocosmia ‘Lucifer’ name.

You can also harvest Crocosmia ‘Lucifer’ seeds from an existing plant during autumn. To grow the plant from seeds, you should first scar the seeds to break their dormancy and soak them to encourage germination. Do this in spring, and plant them once the frosts are over. Once they’ve sprouted leaves, you can transplant them into the ground – but be aware that they won’t flower for the first 2 – 3 years.

If you have an existing plant, the easier and more effective way to propagate is by the division of its corms during spring – see FAQs below for more information on how to do this.

Crocosmia ‘Lucifer’ is a hardy plant, and is generally not vulnerable to disease. The most common problem to which it may succumb is glasshouse red spider mite – particularly during summer, if you are experiencing hot, dry weather, or if you are growing your plant in a greenhouse.

Glasshouse red spider mite, also known as glasshouse two-spotted spider mite, is a common pest found on garden and house plants. It feeds on sap from your plant’s leaves, causing them to take on a mottled appearance, and to drop off early – in the most severe cases, it can even lead to the death of your plant.

You can help prevent the mites by misting your plant with water. If you suspect an infestation, look for signs of the tiny green mites and their eggs on the underside of leaves (you may need a magnifying glass), as well as symptoms such as mottling and paling of leaves, and the appearance of a fine silk webbing over the plant.

The preferred way to control glasshouse red spider mite is biologically – pesticides can damage nearby plants, and encourage resistance in the mites. Biological controls include the Phytoseiulus persimilis and Amblyseius californicus predatory mites, and the larvae of the Feltiella acarisuga predatory midge, and can be purchased via mail order.

If Crocosmia is growing in waterlogged soil, it can also be prone to root rot. Try to avoid this by planting your Crocosmia in soil with good drainage. If growing in a container, make sure the pot has sufficient drainage holes.

Can crocosmia grow in shade?

Crocosmia prefers full sun, although it can cope with partial or dappled shade. It will not thrive in full shade – its leaves will droop and the foliage will not be able to stay erect. If your plant is leaning towards the sun, it’s a good sign that it’s not getting enough sunlight in its current location, and should be moved.

How deep should you plant crocosmia?

Plant your Crocosmia approximately 7 – 10cm under the surface, in order to protect the corm from cold temperatures, and give the plant the support necessary for its leaves to grow vertically. Even so, the foliage may struggle to grow erect – you can help it out with bamboo cane supports.

Can crocosmia grow in pots?

Yes, you can grow Crosomia in a pot or container, and this is a great way to enable you to move your plant around and make sure it’s getting enough sun. Plant it in potting soil during early spring, positioning the corms closely together (you can get away with planting them closer than in the ground). Water thoroughly, and the foliage should begin to emerge after a few weeks when the temperature starts to rise.

How do you divide and replant crocosmia?

Crocosmia can be divided and replanted in spring before it enters the active growth period. To do so, dig into the ground around the plant to a depth of 30cm. Carefully detach and remove some of the plant’s corms, or in the case of the Lucifer cultivar, the underground stems and roots.

Trim any old or dead material, then plant the detached corms/stems immediately in their new home. Water thoroughly, and continue to do so until the plant is established. Crocosmia will appreciate being divided every 3 years or so, for the benefit of its health.

How do you cut back crocosmia?

If you’re simply removing dead or faded flower heads to make room for new blooms during the growing season, you should pinch or cut the stem between the dead flower and the first set of healthy leaves, taking care not to cut off any new buds.

If you’re cutting back Crocosmia in late autumn, once its leaves have withered and died, you can use pruning shears to cut the foliage right back, almost to ground level, and pave the way for new growth next spring.

Why is my crocosmia not flowering?

There are several reasons why your Crocosmia may not be flowering well. It might be that the plant is congested, and needs to be divided – see above for more information on how to do this. Aim to divide your plant every 3 years to ensure it’s in the best health and maximise flower production.

It could also be that you pruned the plant’s leaves too soon after it bloomed the previous year, meaning it didn’t have a chance to replenish its corms through the process of photosynthesis. If this is the case, add fertiliser to the soil to give your plant a boost of nutrients, and make sure to leave the leaves alone this year.

As with most plants, the problem could also be unfavourable growing conditions. For example, your Crocosmia might not be getting enough sunlight, or its soil may be too dry. If you’re growing the plant in a shaded or partially shaded area, try moving it to a spot with full sun, and water the soil around it to keep it moist.

How big do the plants grow?

As a general rule, Crocosmia ‘Lucifer’ will grow in clumps of between 1 – 1.5 metres high, and 0.2 – 0.5 metres wide at maturity. The average plant reaches a height of around 1.2 metres, which makes it perfect for positioning towards the back of your herbaceous border. It will likely take 3 – 5 years before it reaches this size.