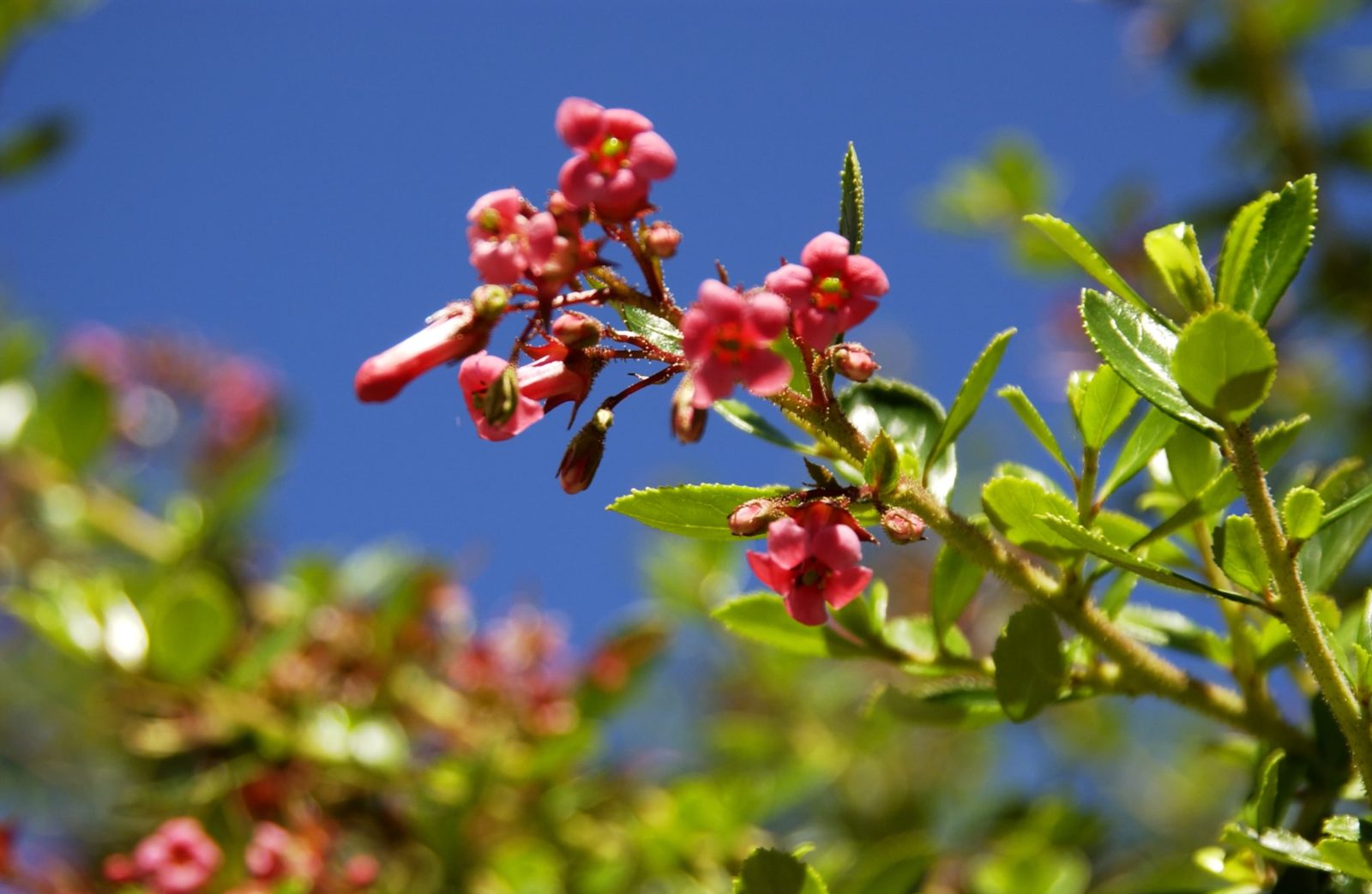 Escallonia is an evergreen, flowering shrub, commonly used as a hedging plant in the UK.

It is characterised by glossy, dark green leaves, and sweet-scented flowers in shades of white, pink or red – it is one of these red species, Escallonia rubra that is commonly known as ‘Redclaws’.

The escallonia plant flowers from July to October, during which time it produces its signature, trumpet-shaped blooms. These add welcome colour to borders and hedgerows in summer and autumn and can help to attract pollinators into your garden.

Originating in South America, escallonia has been cultivated and is now naturalised in western Europe. It is a hardy plant and grows well in most parts of the UK, particularly along the south coast, where it flourishes in sandy soils. However, it can thrive in all soil types, providing the soil is well-drained.

If you want to use Escallonia ‘Redclaws’ to create an attractive hedge, or as part of a border, check out this care and growing guide, for all you need to know about bringing these crimson trumpets into your garden.

Escalloniaoriginates from South America – specifically southern Chile and Argentina – but has spread throughout the world. It is a large, evergreen shrub, and part of the Escalloniaceae family. There are approximately 40 species in total, one of which is the Escallonia rubra, or ‘Redclaws’.

The plant has glossy, toothed dark green leaves, and trumpet-shaped flowers with 5 petals, which grow in panicles or terminal racemes. In the case of Escallonia rubra, these flowers are crimson red or pink and appear in late summer and early autumn. Flowers are honey-scented and can attract pollinators, such as bees and butterflies, to your garden.

Escallonia ‘Redclaws’ will grow to an ultimate height of 2.5 – 4 metres, with a spread to match, making it ideal for use as hedging, screen or border plant in the UK – although it can take 5 – 10 years to reach this height. The plant can be easily shaped and is also suitable for wall or trellis training.

Escallonia is a fairly hardy plant, which grows well in most parts of the UK, and requires little ongoing care once established. It can be used as a specimen plant, part of a garden border, or as hedging or screening.

The plant can tolerate full sun or partial shade, and an exposed or sheltered location – although it’s preference would be for a sunny, sheltered spot. The ideal location is south, west or east facing – avoid north-facing positions, as these are unlikely to receive enough sunlight for the plant to thrive.

Providing the location is sheltered, and not exposed to cold, drying winds, you should not need to worry about escallonia overwinter in most parts of the UK, as it can tolerate temperatures down to -10°C. If temperatures drop lower than this, the plant will need protecting.

Escallonia will grow in all soil types, including clay, loam, chalk and sand, and can thrive in all pHs. Upon planting, mix in a healthy dose of blood, fish and bone fertiliser, to give your plant the best possible start. Escallonia prefers its soil to be moist, but not water-logged, so make sure it has good drainage, and try to keep it free of weeds for the first year.

During the first two years of growth, it may be necessary to water your escallonia during summer, to prevent the young roots drying out. After that, watering should not be required, except in periods of drought, or if your plant is suffering from a disease that it needs to fight off, such as escallonia leaf spot.

Established escallonia generally requires little pruning, apart from an annual light prune to remove any dead or damaged shoots. The best time to prune escallonia is after the last frosts of winter have passed, but before new growth starts forming, so mid-late spring. This will prevent new shoots from suffering frost damage.

Aim to remove approximately one-third of the old wood in total. Trim off any dead material, and thin out any crowded shoots. Mulch and feed after pruning, to help the plant grow and flower that season. If you want to propagate your escallonia that year, you should prune back harder than usual, to encourage plenty of new growth.

If you’re growing escallonia as a hedge, re-shaping may be necessary to ensure that sunlight can reach the base of the hedge and keep it green and healthy. In this case, aim to prune the hedge into a pyramid shape, with a wider base than top, and thin out any condensed shoots, to ensure light can reach the lower foliage.

The best time to plant escallonia cuttings is in mid-late spring, to ensure that young cuttings do not succumb to frost. Mix a good fertiliser into the soil upon planting, and water well until the plant is established.

If your goal is to create a hedge, plant seedlings 30 – 40cm apart, in either a single or double row, to ensure good root establishment. Escallonia plants are fast-growing and quick to establish; they may grow up to 50cm a year in their first few years.

The natural habitat of escallonia is South America, where it grows mostly in Chile – however, it has been cultivated, and is now naturalised in many other parts of the world, including western Europe and New Zealand.

It is a generally hardy plant, but its ideal growing conditions are warm, sunny and sheltered. It will grow in almost any soil type, but prefers fertile soil, and one which is moist, but well-drained.

Softwood cuttings have the highest potential to take root. If you want to take softwood cuttings from an established plant, you should prune it back hard first, to encourage new growth. Take the cuttings early in the day, as this is when they will be most turgid. Use a sharp knife to cut 10cm long, non-flowering shoots from the parent plant, making the cut just above a bud.

If possible, plant the cuttings immediately – otherwise, they can be stored in the fridge for a maximum of 12 hours. Remove the lower leaves from the cutting, dip the base in a rooting hormone, and insert into a container filled with cuttings compost. Water well, cover with a plastic bag and place the cuttings in a warm, light location.

Remove the bag a few times a week to ventilate, keep the soil moist, and remove any dead or dying material. After approximately 8 – 10 weeks, your cuttings should have taken root, and be ready to plant out individually.

Although taking cuttings is by far the most common method of propagation, it is also possible to buy seeds from specialist growers – this may be a good option if you want to grow a rare species of escallonia.

One of the most common diseases to watch out for with this plant is escallonia leaf spot. This relatively new fungal disease causes purple and black leaf spots, often with white centres. As the disease advances, the leaves turn yellow and drop from the plant. It most commonly occurs in summer, although your plant could be struck at any time.

To tackle the disease, you should remove any infected material from the plant and the surrounding area immediately, to prevent it from spreading. Prune the plant back hard, to encourage new growth, and apply a fungicide, to prevent reinfection. Take good care of the plant by feeding and watering it regularly, to help it fight the disease.

Scale insects may also be a problem with escallonia, as on many ornamental plants. Signs that your plant is infested with these pests include visible scales or bumps on the leaves of the plant, a sticky substance on the leaves which can turn to sooty mould, and distorted foliage growth.

To treat an infestation of scale insects, you have the option of biological or pesticide control. Biological control involves introducing a natural predator to the environment, such as parasitoid wasps or the Chilocorus nigrtus ladybird, which can be purchased from mail-order companies.

The best pesticides are organic sprays, such as plant oils or fatty acids, which are less likely to interfere with other, larger insects. If these don’t work, more persistent chemicals such as deltamethrin can be applied. Always make sure to only spray pesticides when plants are not in flower, to avoid harming pollinators.

When should I cut an escallonia hedge?

The best time to cut back on escallonia hedge is in mid-late spring, after the lasts frost has passed, but before the plant starts to produce new growth. Late April or May are generally considered ideal.

Unless you need to drastically cut back an escallonia hedge that’s growing where it shouldn’t, or your hedge is looking bare at the bottom and needs reshaping to allow sunlight to reach the lower foliage, it should not require much pruning – simply remove any dead leaves and shoots, and thin out any areas that look overcrowded.

How can I treat escallonia leaf spot?

Escallonia leaf spot can be treated by removing all infected leaves from the plant and the surrounding area as soon as possible, to prevent the disease from spreading. Keep your plant well fed and watered, so it is healthy enough to fight the disease. Crucially, you should also prune the plant back hard, to remove infected material, and encourage new growth.

Once pruned, it may be a good idea to apply a fungicide, to prevent reinfection. However, as escallonia leaf spot is relatively newly discovered, there is currently no specific fungicide to tackle it. Instead, you can use a generic fungicide that is recommended to tackle leaf spots on ornamental plants and test it out on a small part of your plant first, to make sure it doesn’t damage it.

In mild climates, escallonia plants are evergreen shrubs, meaning they retain their glossy dark-green foliage year-round. This makes them ideal for use as hedging or screening plants, as they will not turn bare in winter.

However, in more extreme parts in the UK, such as the north of Scotland, or if they are exposed to windy conditions or sub-zero temperatures, escallonia plants may experience leaf discolouration, and can lose their leaves.

When does escallonia flower?

Escallonia is a relatively late bloomer; flowering from summer until autumn. The flowers are various shades of crimson, pink or white, depending on the species. Escallonia rubra generally produces its first clusters of its signature red, trumpet-shaped blooms in July, and can continue until October.

Can escallonia be grown in containers?

Some dwarf varieties of escallonia are suitable for container growth. A good example is Escallonia rubra ‘Pygmaea’, which still has the signature crimson red flowers, but is small and compact, reaching a maximum of around 1m in height.

Make sure to choose pots with good drainage, to ensure your escallonia doesn’t become waterlogged. Plant in a humus-rich compost, and feed container-grown escallonia weekly during summer, to encourage flowering. You will probably need to repot your escallonia each year, as it grows.