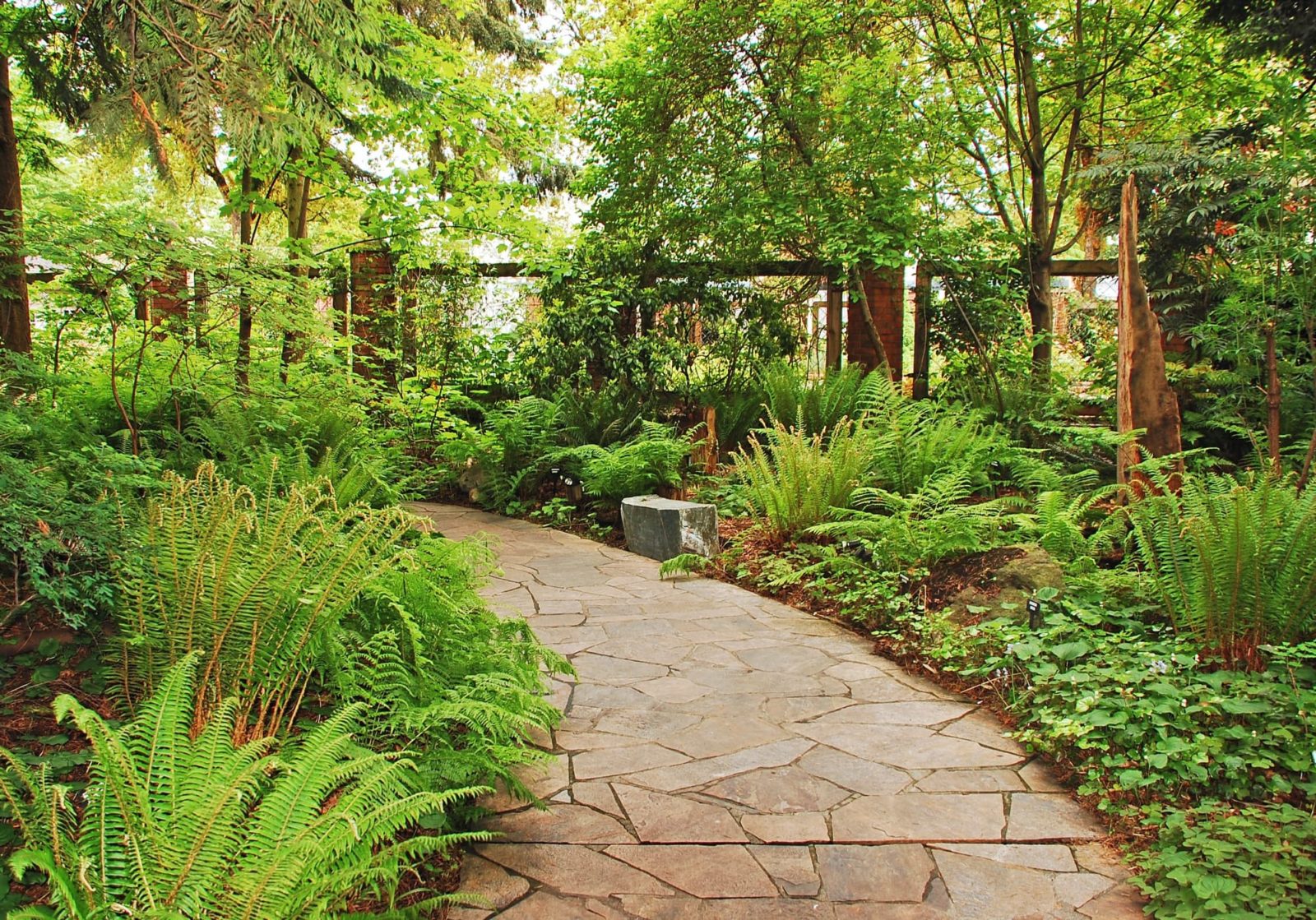 Ferns are plants which are loved by gardeners everywhere, thanks to their hardiness and their ability to bring colour and beauty to any shady spot in the garden.

Fossils testify to the fact their ancestry stretches back 360 million years – and yet they have changed very little, if at all, since their initial appearance on this planet. [source]

These outdoor – and indoor – plants are tough in the sense they’re not prone to disease, brush off pests and don’t need much looking after (although there are potential exceptions – see below).

In fact, all that’s really required is that you cut away the dry fronds to allow the new ones to get going.

There are basically two different types of fern – Evergreen (which retain their leaves all year round, unless there proves to be an exceptionally cold winter) and Deciduous ferns which uncurl and announce their presence in our gardens in spring.

And not all ferns like dry conditions either; some ferns favour moist growing conditions, while others are more at home in practically boggy environments.

Of those that do flourish in dry conditions, they tend to prefer dappled sunlight via the leaves of deciduous trees, rather than being completely exposed to the intense mid-day heat.

Others are fine nestling in the ground at the bottom of a north-facing wall, while all will appreciate a little bone meal and leaf mould.

They will also require a little watering in their first season, along with some mulch, at least until they’re past the initial growing phase.

In this article, we are concentrating only on ferns which prefer the dry spots in your garden – the areas other plants have, or will, shun.

And here is a list of our particular favourites:

Cristata meaning ‘crested’, this graceful king fern is capable of growing in both dry and moist soil, although it does best in the former.

This fern is tall when fully-growing, reaching up to three-foot at its highest.

The fronds should be cut back in the middle of winter.

When flourishing though, appropriately enough, the crests on this fern are dark green and heavy, forcing the ends of the fronds to bend.

This, in turn, makes the fronds appear to curtsey.

A beautiful plant reminiscent of lace, the Soft Shield Fern’s fronds swirl upwards before tapering to a point around one metre from the ground.

Some gardeners say the shape reminds them of a badminton shuttlecock which is green with brown bristles.

An elegant evergreen, it flourishes under dappled light but should be given lots of space to allow it to expand into a large and luxuriant addition to your garden.

This is an expensive fern to buy but can be found growing wild in Devon where it was discovered last century by a hedge-layer of the name Bevis. [source]

A hardy evergreen fern, whose rather plain name, belies its pretty foliage.

The fronds resemble a ladder with what appears to be pimples on the underside.

It will reach a height of around 30cm and can certainly flourish unless you cut it back.

Then again, it makes a pretty covering for dry soil underneath trees.

A tough and shiny fern whose strap-like fronds have a spikey appearance, this interesting-looking evergreen has the capacity to withstand even a drought when planted in alkaline-heavy soil.

It flourishes under trees and especially in forests where it grows wild – it will even grow out from a north-facing wall.

Another fern which practically looks after itself, Hart’s Tongue only requires a little mulch now and again as well as a little snipping and tidying when spring comes around.

There are variations to the leaves such as ‘Marginata’ with its crinkly, serrated edges and ‘Cristatum’ with pretty ruffles at the tips of its fronds.

It is a colourful fern with very light green, almost yellow triangular leaves and a prominent red/purple stripe down the centre with ribbed veins.

Originating from Japan, it can grow to around 80cm at its tallest.

It suits most shaded locations.

You’ll see it in spring, summer and autumn – before it takes a break for winter.

Unlike a lot of ferns, this variety won’t spread.

It is large though and will grow to a height of 60cm.

A delightfully-named fern – which also goes by the term ‘Many-Fingered Male Fern’ – it looks particularly good beside thicker and bolder plants.

It is not just the varied textures and fascinating foliage shapes of ferns which have been delighting gardeners all these centuries.

No, their often unpronounceable and amusingly descriptive names play a part too.

Names, such as congestum, for instance, to describe a ‘busy’ plant.

Although ferns aren’t typically known for being bothered with pests, there are a few garden culprits to keep an eye out for with particular ferns.

Slugs, snails, and caterpillars often have a fancy for the strappy fronds of the Harts Tongue fern, finding them highly edible.

Crosiers too, can prove an interesting snack for these insects.

One proven method to deter them is to add bark and gravel to your mulch since this can often prevent them from reaching the ferns in the first place.

You could also attempt to distract them from the fern by putting down beer traps and citrus peel.