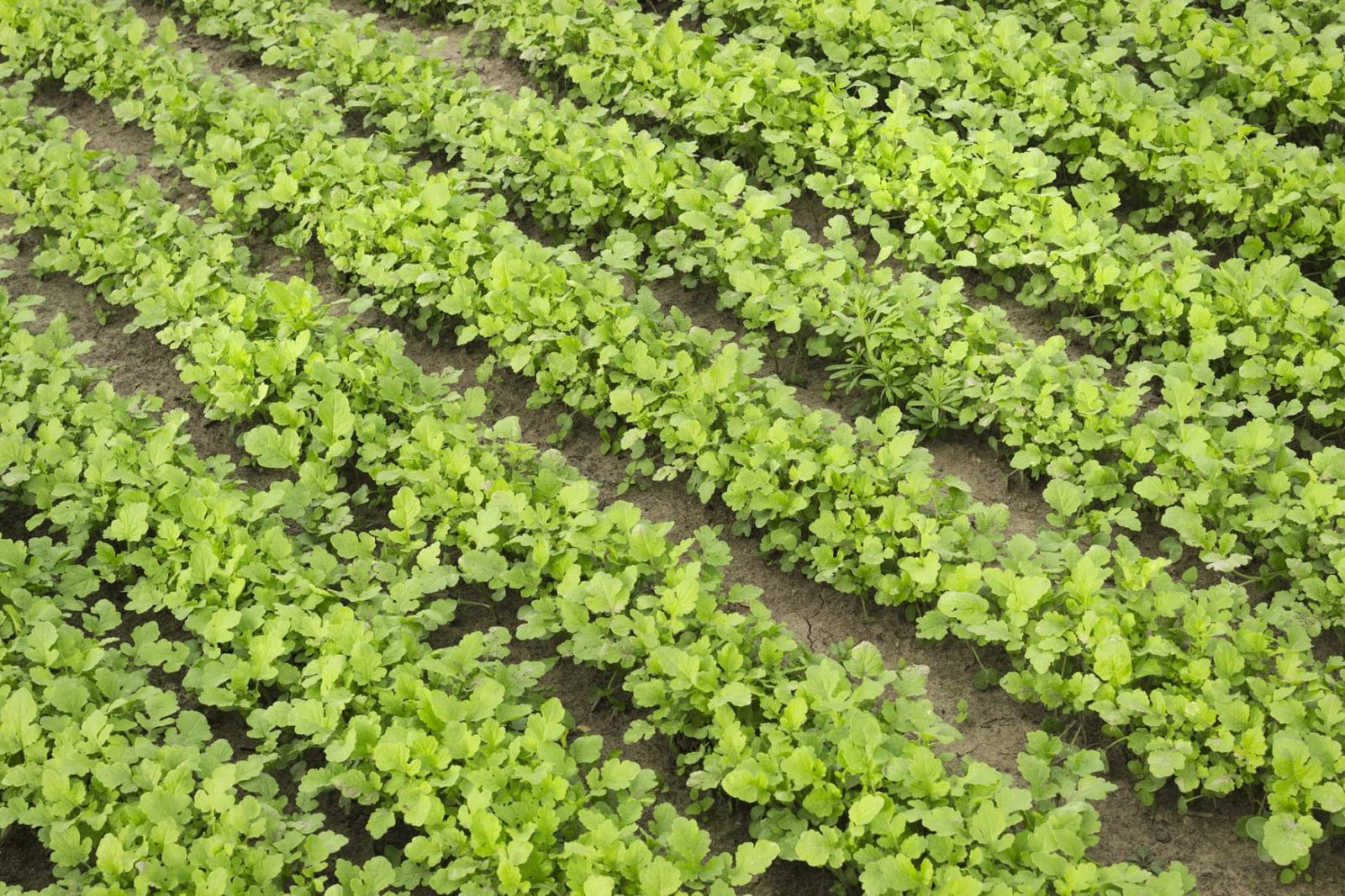 Green manures refer to a group of small, green, annual or herbaceous plants, that are sown, grown and ploughed (dug in), in order to add organic matter to the soil and improve its structure and nutrient content.

Some do this by helping to prevent soil erosion, whilst others trap nitrogen on their root nodules.

The foliage of many of these plants acts as a natural weed suppressant.

All green manures absorb nutrients from the soil and, once grown, are dug back in, to return the nutrients in a more usable form.

This benefits new crops and can be particularly helpful in a vegetable garden.

Common plants used as green manures include mustard, buckwheat, legumes and winter tares – although there are many more varieties which may be used for this purpose.

Green manures can help all soil types and are a reasonably quick, effective and underrated way to improve your soil.

If you want to learn more about this natural method of soil enhancement, read on for our guide on why and how to use green manures in your garden.

Using this technique, your soil could be enriched, and ready to grow new crops in a matter of weeks.

What Are Green Manures?

Green manures – also known as cover crops – is the name given to a selection of small, green, fast-growing plants, which are sown, grown and dug into soil, with the intention of improving the soil quality.

They can do this in a variety of ways, including by improving the structure of the soil, suppressing weed growth, adding nitrogen, and attracting desirable insects, depending on the type of plant sown. [source]

The one thing all green manures have in common is that they draw in minerals and nutrients from the soil.

Then, once grown, the foliage is chopped up and the plants dug back into the soil, returning the nutrients as humus and preparing the soil for the growing of other crops. [source]

This is a good way to preserve soil nutrients over winter.

Green manures can be helpful in an area of poor soil quality, or high soil erosion, where nutrients are easily washed away.

They’re particularly effective at reducing the loss of nitrogen and make a great alternative, or addition to, compost and manure.

There are several types of plants which can be used as green manures, and each varies in appearance and character.

Having said this, there are some characteristics which are common to most green manures:

There are many examples of plants which make good green manure crops.

The best one for you will depend on what you want to achieve – eg. suppress weeds, cover bare soil, protect soil from erosion, add nitrogen – as well as your soil type and the time of year.

One popular example of a green manure is Mustard Caliente – a small, broadleaf, cruciferous oilseed plant that grows extremely quickly.

As a result, it can be used to fill bare gaps in your soil after you’ve lifted crops, for short periods of only 1-2 months.

Buckwheat and Alfalfa are very effective green manures that can be grown in the summer months.

Alfalfa, like many legumes, has the ability to fix nitrogen to its root nodules, adding this important plant nutrient back into the soil.

Good plants to sow in autumn, grow over winter, and dig in come spring, include Winter Tares (vetches) and Hungarian Grazing Rye.

Both of these varieties are particularly tolerant to frost and winter conditions, and can greatly improve soil structure.

There are also some green manures that can be left to grow for 1 – 2 years if you want to better improve the structure of the soil and protect it from erosion.

Clovers such as Essex Red Clover and Alsike Clover are good examples of these.

These can also be trimmed regularly whilst growing, and their cut foliage used as a mulch.

What Are The Best Green Manure Crops For Allotments?

As above, this depends somewhat on the condition of your soil, and what you’re growing.

If you’ve inherited an allotment that has been well-used and drained of nutrients by previous owners, planting Essex Red Clover in loamy soil, Alsike Clover in wet acidic soil or Trefoil in dry soil for the first season will improve the soil quality before you start growing veggies.

Once you’re in full swing, mustard, Crimson clover or Phacelia are good green manure crops to sow, as you can plant them after lifting your veggies, and they’ll be ready to dig in within 2 months.

This makes them a quick and effective way to add nutrients to your soil between crops, without taking the soil out of action for too long.

These plants will also help to discourage weeds.

Phacelia has beautiful flowers, which will add to the look of your allotment, and attract beneficial insects such as bees and hoverflies, which prey on aphids.

If you’re looking for another green manure plant to increase the aesthetic of your veggie patch, Bitter Blue Lupin produces pretty blue flowers, and being a legume, will also add nitrogen to your soil.

During winter, when you’re not growing any veggies, you can sow winter tares or grazing rye in late summer or early autumn, and dig it in in early spring, at least 2 weeks before planting your summer vegetables, to increase the nutrient level in your allotment’s soil.

However, be aware that these plants are harder work to dig in by hand.

How To Sow Green Manures

Green manures can be sown from spring to autumn, with the best time to sow depending on the variety of plant, and your purpose for using green manure.

For example, green manures being used to suppress weeds or add nitrogen to the soil are best sown in summer.

This will allow the plants to extract any remaining nutrients from the soil, before winter rains and frosts set in.

When it comes to sowing them, choose whether to plant the seeds in rows, or scatter them liberally and rake them into the soil.

Water liberally, and leave them to grow.

How To Dig In Green Manure Crops

Depending on what type of green manure crops you’re growing, you’ll probably want to dig them in 2-3 months after sowing, or just before they reach maturity, to add nutrients back into the soil.

Make sure to dig your green manure crops in before they set to seed.

As useful as they can be, there are some disadvantages of green manures.

One is that the damp, dark ground under green manure plants might attract pests, such as slugs and snails – although it could also be attractive to some slug predators, for example frogs.

Other problems that occur can be specific to the plant variety you’ve chosen.

For example, mustard, as a brassica, is prone to clubroot, a fungal infection which can distort roots and stunt growth. [source]

The disease is very hard to eradicate – control measures include liming to increase the soil pH and increasing soil drainage. [source]

Another disadvantage of green manures is the extra time and effort involved in growing and digging them, in comparison to adding a layer of compost to your soil – it is somewhat arguable as to whether the results of using green manures are superior enough to justify the hard work.

You also have to take into account the time taken for plants to decay after being dug in.

You should not attempt to plant anything new for at least 2-3 weeks after digging in, as the decaying matter is likely to hamper growth.

Green manures are not for the impatient gardener!