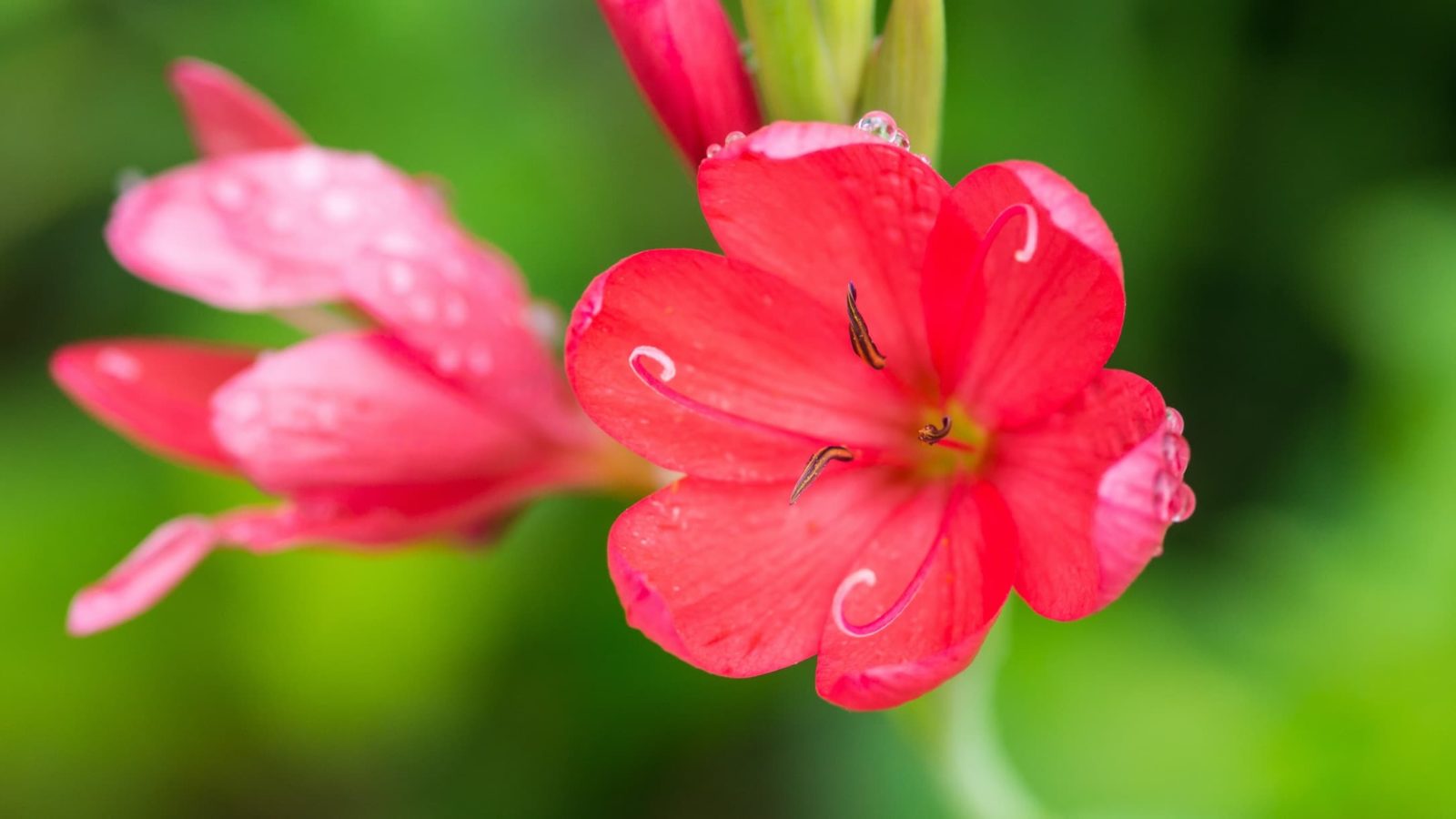 Hesperantha is possibly one of the best autumn flowering plants that can be grown here in the United Kingdom.

Originating from Africa, it is a sun-loving plant which flowers from the end of summer until the first frosts, providing a wonderful late injection of colour into the garden.

Previously botanically named as Schizostylis, it is also known as the crimson flag or kaffir lily.

It is a perennial plant (although pretty much evergreen) and is part of the iridaceae family, along with irises.

The name hesperantha derives from the Greek words hesperos and anthos and combined together simply translates as evening flower.

Rhizomes are essentially plant stems that grow horizontally under the soil with roots coming out from its nodes and as a perennial, they will come back each year.

The flowers, displayed on stems above the foliage, are available in classic whites, soft pinks or bright reds and can flower for months on end from September into the autumn.

Many hesperantha varieties are widely available here in the United Kingdom. However, be warned, as they tend to fly off the garden centre or online nursery shelves, especially when they’re in flower and not much else is.

For a lovely soft pink flower, Hesperantha coccinea ‘Pink Princess’ AGM is a great option and can grow to a slightly taller H0.6m x W0.4m.

For a bright and vivid red Hesperantha coccinea ‘Major’ AGM will not disappoint and will liven up any container or border during the autumn and grow to an eventual H0.6m x W0.6m.

Both ‘Pink Princess’ and ‘Major’ have been given the Award of Garden Merit (AGM) by the Royal Horticultural Society, indicating that they perform reliably well in the garden.

All varieties are fairly vigorous and well adapted to our UK climate, especially in our milder regions and will bloom until the first frosts, which in some areas could be as late as December.

Well suited to growing in either a border or container, it is also a great choice as a cut flower due to its straight stems, long flowering season and long vase life.

How to grow and care for Hesperantha

Hesperantha are relatively easy to grow and are great value for money, as being perennial, they will keep coming back year after year and are easy to propagate – producing plants for free.

Best planted in spring as the soil is beginning to warm up and new growth appears, hesperantha prefer relatively fertile soil and room for their rhizomes to spread.

With a hardiness rating of H4, they’re able to withstand temperatures down to -10C and will survive most UK winters without protection, in all but the coldest areas.

In really harsh winters or if grown in frost pockets, plants can be protected with cloches, fleece or a generous mulch of straw.

Hesperantha are most readily available as potted up plants, which can be planted out at the same depth they were in their original pot. Online suppliers may offer rhizomes for sale, which can be cheaper but are not potted up.

On arrival, the rhizomes need to be soaked in water for 30 minutes and then planted out or into pots with the shoots facing up, 10cm deep.

If planting straight out into a border, then spacing of 20cm is recommended. Water well after planting and if growing from rhizomes try and be patient, as they may well take up to a year to establish before flowering.

Hesperantha can be pretty much left to their own devices as they require little care over the year, apart from deadheading to extend flowering and removing the old tatty foliage and stems during winter.

However, during the hottest summer months it is important to water the plants regularly, as they prefer a moist soil, which is not all that surprising since their natural habitats include African river banks and water meadows.

Feeding is not strictly necessary, but a general-purpose fertiliser applied in spring wouldn’t go a miss, along with a good mulch of organic matter in winter.

Thankfully hesperantha seem to be left alone by most slugs and snails and do not suffer too badly from other pests or diseases. They also appear to be rabbit resistant, a serious bonus for those gardening out in the countryside.

Hesperantha produces delicate and elegant flowers on stems protruding above their slender foliage and look great in an informal cottage, coastal or courtyard garden scheme.

Given their African heritage, it is no surprise that they are happiest in warm and sunny spot, a south-facing situation is ideal. However, if you do not have a south-facing space don’t worry as they can tolerate a small amount of shade.

When it comes to soils, they are fairly tolerant and will cope with any chalk, clay, sand or loam soil as long as it is kept moist. Despite this, they do not like a harsh cold wind, so a sheltered spot is necessary.

As a clump-forming perennial, they look equally good in a border or a pot. The benefit if grown in a pot or container is that they can be moved under cover or to an unheated greenhouse during the coldest months, which may be preferable if you live in an exposed spot or frost pocket.

As a vigorous plant, hesperantha can become congested over time and it is recommended to lift and divide plants every 2 – 3 years. Division is an easy way of producing new plants and even better, they are for free.

Division is best done in spring when the soil has warmed up and new growth is appearing. Plants can be lifted and gently separated into smaller clumps, with 5 – 6 shoots on each.

These can then be replanted elsewhere in the garden, potted up and grown on or given to family and friends.

Hesperantha can also be grown from seed, although when considering how long it takes and the time involved, it is no wonder that dividing is the preferred and easier option.

To grow from seed, whether saved and stored or bought, it is best to sow in early spring in a moist and free-draining soil mix and covered lightly with vermiculite.

Germination requires a temperature of 15°C and can take up to three months and so requires a lot of patience. Once germinated, seedlings can be thinned, but left in place until the following year when they can be potted on and planted out.

Hesperantha really are a great plant to grow in UK gardens – not only are they fairly hardy and reliable, but they require very little looking after and will provide months of stylish and graceful flowers to brighten up any garden during the autumn.