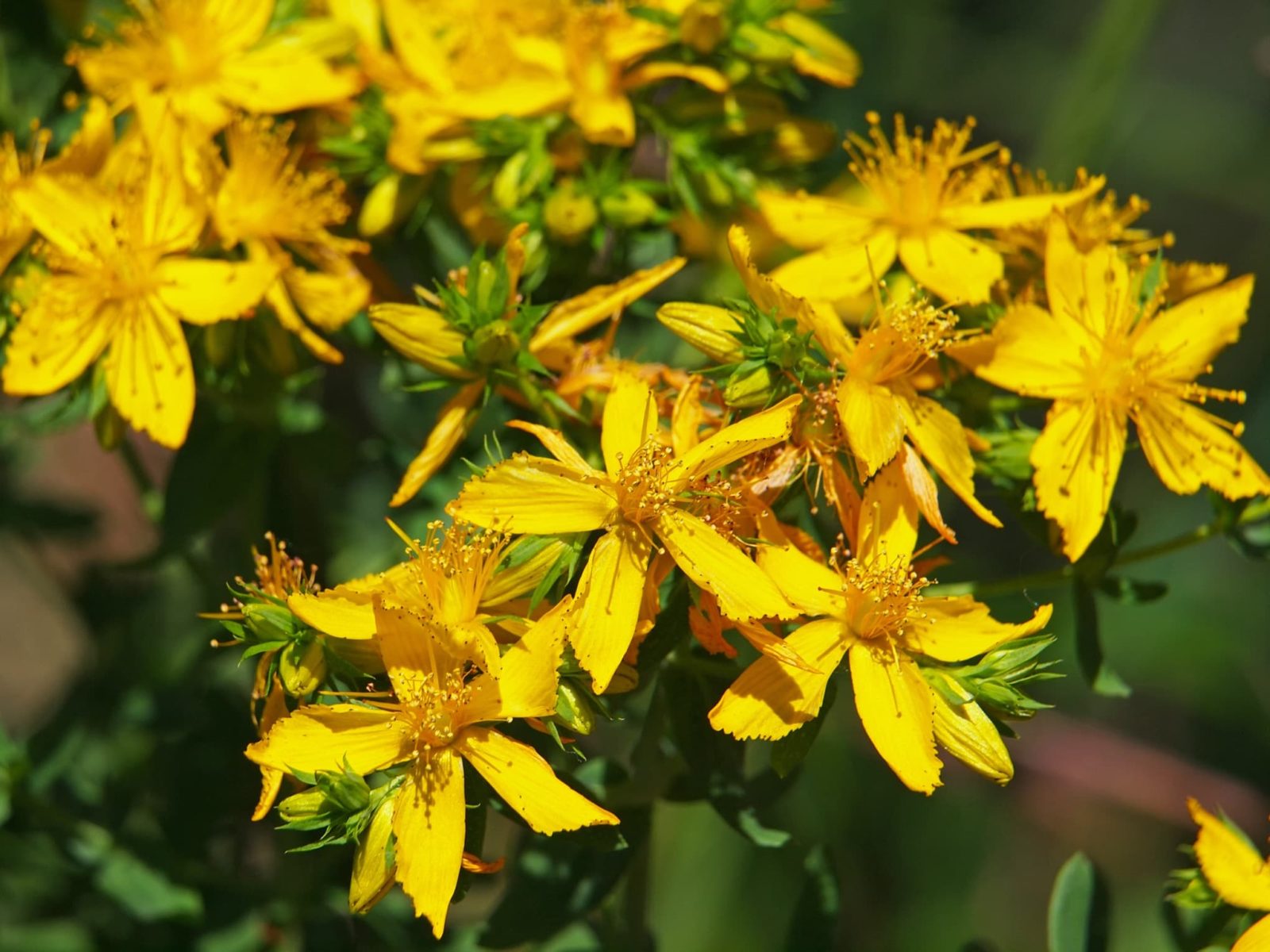 St. John’s Wort is a herbaceous perennial showcasing paired green leaves and attractive, star-shaped flowers in various shades of yellow, that will brighten up even the dreariest of gardens.

St. John’s Wort grows easily in the UK climate and can thrive in all soil types.

You should, however, air on the side of caution if you plan to add it to your garden, as in many gardens it is classified as a noxious weed.

If that doesn’t put you off, and you’re still keen to bring St. John’s Wort into your UK garden, read on for our best care and growing tips, to find out everything you need to know about this bright and widespread wonder plant.

Hypericum ‘St John’s Wort’ is a member of the Hypericaceae family, and is found in most parts of the world, including Europe, North and South America, Australia and Asia.

Due to its widespread nature, it is difficult to pin down exactly where it originated.

The variation Hypericum perforatum is thought to come from Europe, North Africa and South-West Asia.

There are around 400 different varieties of Hypericum, but it’s H. perforatum that is known as common St. John’s Wort.

The plant is allegedly called St. John’s Wort because it flowers around St. John’s Feast Day on 24th June.

It has reddish, woody stems and yellow-green leaves with translucent dots that make the leaves appear perforated and inspire its name. In early summer, it produces bright yellow, star-shaped blooms of up to 2.5cm in diameter.

St. John’s Wort is a very hardy plant that is easy to grow in the UK and requires next to no maintenance once established. It can thrive in sunny or shaded conditions, sheltered or exposed – the ideal spot for it is probably one with partial shade.

It will grow in most soil types, including clay, chalk and sandy, and all pHs, as long as the soil is moist and has good drainage. The plant is therefore a perfect choice for any area of the garden and makes a particularly great addition to a riverbank, border or wildflower area.

One of the best (and most common varieties) of St. John’s Wort to grow in the UK is Hypericum Hidcote. This variety produces numerous bright yellow flowers throughout July and August and remains mostly evergreen over the winter. It typically grows to 1.2m tall, and can also make an attractive hedging plant.

You should plant your Hypericum in spring or autumn (providing the ground isn’t frozen), and water well. Once established, Hypericum requires very little ongoing care, but you should water as required during the growing period, or in cases of extreme drought. You can also add a fertiliser twice a year for the first 5 years, to help it establish.

Pruning Hypericum is not required, unless you wish to cut the plant back to reshape it. If you choose to do this, it is best to do so annually in early spring, and cut it back using a hedge trimmer or secateurs. Be aware that flowers form on older shoots, so the new shoots that grow after you prune will not flower until the following year.

It’s also worth bearing in mind that St. John’s Wort is particularly hardy and has extensive rhizomes, and can, therefore, be quite difficult to fully remove once established. For this reason, you don’t need to be afraid to cut the plant back considerably, as it will grow back quickly, and will not be harmed by extensive pruning.

When To Plant Hypericum

The best time to plant Hypericum ‘St. John’s Wort’ is in mid-spring, March to April, or in the autumn, in September or October. However, you can plant at any time of the year, providing the soil is not frozen.

To plant a Hypericum, you should find a partially shaded spot in your garden and dig a hole double the size of the plant’s root ball. Add the plant, along with some organic fertiliser, and re-fill the hole with soil. Water the ground thoroughly.

Hypericum ‘St John’s Wort’ is thought to be native to Europe and Asia, but has spread and now grows in many other parts of the world, including North and South America, Australia and New Zealand. It can thrive in a variety of climates, including those with summer or winter-dominant rainfall.

It generally grows in fields and pastures. Although it is hardy and can grow in a wide variety of soils and conditions, it does not do well in high altitudes above 1500m, areas of low rainfall, or hot environments with an average daily temperature above 24°C.

Hypericum can be propagated by seed, division, or by taking softwood cuttings. To propagate by seed, sow seeds any time from mid-spring to early autumn. Make sure the bed is well-dug and weed-free, and the surface soil is crumbly in texture. Space the seeds around 0.5m apart, depending on the variety. Keep the soil moist during the growing period.

To propagate Hypericum by division, you should act in spring or autumn, when the plant isn’t in active growth. Lift the existing plant gently out of the ground, and divide the root ball into two. Re-plant the divisions immediately, and water well. This is an easy way of propagating Hypericum.

If you want to take softwood cuttings, the best time to do this is in July and August, when the plant is in full bloom. To take your cuttings, you should look for new growth and non-flowering shoots that will root more easily. Take 10cm cuttings, starting from just above a bud.

Once you have your cutting, remove lower leaves and dip the bottom in a rooting hormone. Plant your cuttings in a pot with compost and water them, then cover with a plastic bag and place them somewhere warm. Keep the soil moist, and after around 10 weeks, your cuttings should be rooted and ready to pot individually.

There are not many diseases or pests common to Hypericum – the plant is generally disease-free. The main problem usually faced by growers of St. John’s Wort is that it spreads and begins to grow out of control.

St. John’s Wort is very hardy and will adapt its habits and growing form to suit its available climate. It also has extensive rhizomes which are prone to creeping underground to unwanted areas.

The plant is highly invasive, and can replace native plants in natural ecosystems – it is even capable of making a usable field nonviable. This, along with its toxicity, has led over 20 countries to classify the plant as a noxious weed.

It is very difficult to permanently eradicate St. John’s Wort from your garden. Even if you think it’s all gone, seeds can lie dormant in the soil seed bank for years, and germinate once disturbed. If you want to remove unwanted St. John’s Wort, try using a specialised herbicide, such as glyphosate.

When should I take hypericum cuttings?

Taking cuttings is one of the easiest and most reliable ways to acquire St. John’s Wort. The best time to take softwood cuttings from your Hypericum is in July and August when they are in full flower. You should try to choose new shoots that aren’t flowering, as these will root more easily.

For this reason, it might also be a good idea to prune back your Hypericum in the spring prior to taking cuttings, as this will ensure the plant has plenty of new growth for you to choose from.

When should I cut back / trim hypericum?

Hypericum does not need to be cut back or trimmed – unless you want to reshape it or reduce its size. If you want to do this, the best time to cut back St. John’s Wort is in early spring, around March time. This will result in your plant flowering a little later than usual.

If you prefer, you can also trim the plant back in early autumn, after the flowering period is over. You can cut it back as much as you like, to around 0.5m high, as established Hypericum is a hardy plant that will grow back quickly after pruning, and will not be harmed by a significant cut-back.

Can I grow St. John’s Wort in a container?

St. John’s Wort will adapt to most growing conditions, and it is possible to grow it in a container – although this does not represent its ideal environment. Make sure your container has good drainage, and keep the soil moist.