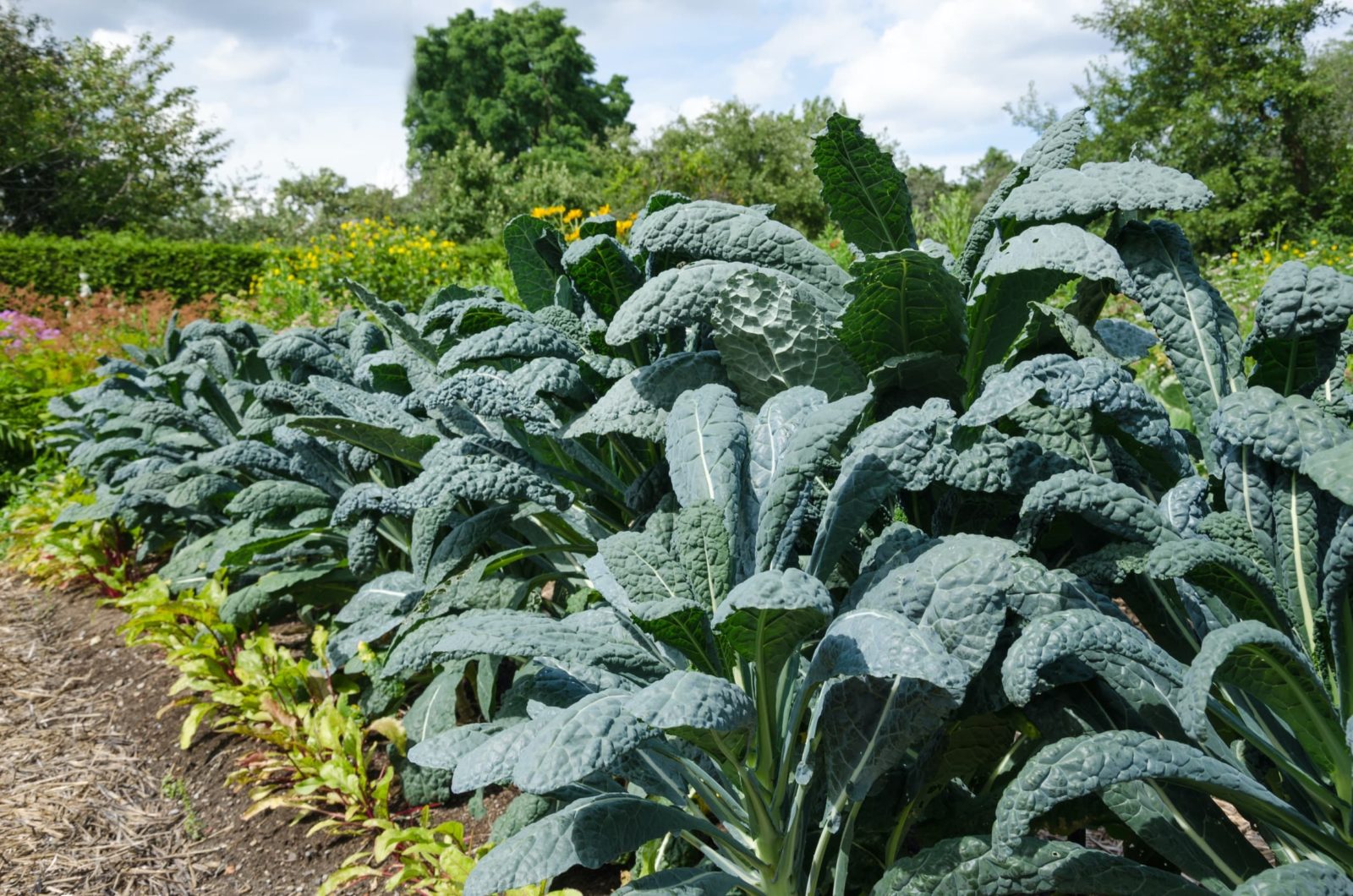 How To Make A Compost Heap In Your Garden Or Allotment

It made its way into the superfood lists a few years ago, and enjoyed a big boost in popularity as a result.

It’s a great plant for growing in your garden, and after reading this guide you’ll have all the info you need to grow it at home.

Let’s start with an introduction, in case you’re unfamiliar.

It’s a tasty and an increasingly trendy type of cabbage. It has big, dense curly leaves, and for most varieties these will be a rich dark green.

Kale is a versatile ingredient that you can use in salads, in dishes, or as a garnish.

It features in recipes including everything from roasted sesame seeds, to fried chorizo and poached egg, to the humble British potato.

“Is it hard to grow kale?” you may be thinking.

Not at all. It’s a famously easy plant to grow.

So what are you waiting for!?

Can you grow kale in your garden?

If you fancy growing this wonder-vegetable in your garden, you’re in luck. There are a few things you need to do to take care of it – which we’ll cover later – but it’s nowhere near as strenuous as some other plants.

By the end of this guide you’ll know how to grow kale indoors or outdoors, which varieties you can choose from, and how to protect your fledgling kale crops against pests.

If you’re not convinced of its benefits already, here are some reasons why kale is a great plant to grow.

Firstly, it’s hardy. Kale tolerates cold and light shade well, and is not prone to as many pests and diseases as some other plants.

Also, it will produce a good harvest in almost any condition. As long as you avoid heavy shade or particularly soggy ground, you’ll reap the bounty of your efforts each time it comes to harvesting.

Which types of kale can we grow in the UK?

There are several varieties of kale that can be reliably grown in the UK. These vary in shape, size, colour, and difficulty (although they’re all relatively easy). There’s something in this list for everyone.

Here are the main types you’ll come across. Any quotes in this section are from the Garden Focused article about kale, which we recommend to any prospective kale gardeners.

This excitingly named variety is “bred in Britain, for the British climate”. It won an award form the RHS in recognition of its quality and general suitability for British gardens.

This kale, whose name translates to ‘Tuscan black cabbage’ is the original Italian plant that other varieties have been bred from.

Not all varieties are suitable for growing in the UK, so make sure you choose the right one.

This can grow up to a whopping 90cm tall, although it actually produces a smaller harvest than other varieties.

Despite this, it won an RHS award for its ornamental appearance, and for how tasty its leaves are.

An ancient Siberian variety that, by definition, will be able to handle anything the puny British winter throws at it. Red Russian is renowned for its great taste, too: a real win win!

Known as “one of the most curly of the curly leaf kales”, and also one of the most prolific, with over a kilogram of leaves per plant to be expected in each harvest.

A compact variety with a lower yield than some others. Its size makes it popular for growing in containers, or in exposed gardens.

How to grow kale

You have a few options for where to grow kale.

It can either be grown in your garden as from seed, or indoors in window boxes,  conservatories, or similar.

Once seeds have sprouted indoors they can be moved outdoors for optimal results.

The next sections of this guide will teach you how to grow kale in each of these places.

How to grow kale outdoors from seed

The Old Farmer’s Almanac says that “you can plant kale at any time, from early spring to early summer”, adding that “if you plant kale late in the summer, you can harvest it from [autumn] until the ground freezes in winter.”

We recommend sowing in early May.

To prepare your kale bed, mix about a cup of 5-10-10 fertilizer into each 25 feet of soil. For best results mix into the top ten centimetres or so.

Then you’re ready to plant the seeds. Planting about a centimetre deep into well-drained, light soil will give the seeds the best chance to thrive.

After about 2 weeks, thin the seedlings so that they are spaced 20 to 30 centimetres apart.

We also recommend netting the plants to protect them from hungry birds, as kale is one of their favourites!

The best conditions for kale are full sun, moderately heavy and well-draining soil, and a pH level around 6.5.

It’s recommended to grow kale as part of a crop rotation, in order to maximise its access to nutrients in the soil, and to reduce the risk of pests.

How to grow kale indoors from seed

Growing indoors is good because it protects the seedlings during the most vulnerable phase of their life.

To do this, fill your pot nearly to the top with compost, then place two seeds in a hole a centimetre deep. Cover them, water gently, and leave on a windowsill with lots of sunlight.

The seeds will germinate anywhere from 5c to 30c, although the optimal temperature is around 15c.

How to move your indoor-grown kale outside

You’ll want to transplant your kale outside around mid-June. Again, because kale is quite hardy, there is some flexibility with dates.

You want to look for plants are about 15 centimetres tall, as these are most likely strong enough to be successfully moved.

Plants sown indoors need to be ‘hardened off’ before being planted out. This means you give them a chance to get used to outdoor conditions before being transplanted, because there are fluctuations in temperature outside that plants aren’t used to, as well as more wind.

To do this, leave them outdoors for a couple of hours on the first day, then incrementally longer over a week or so.

When it’s time to plant them out, plant them a couple of centimetres deeper than they were before, and keep about fifty centimetres between the plants.

Water the ground if its dry, and take care not to disturb the roots.

Many gardeners advise sprinkling blood, fish and bone fertiliser on the soil (don’t worry, this isn’t as gross as it sounds.)

Caring for your kale plants

It’s a hardy plant, but you still need to a few things to give your kale the best chance to grow strong.

You’ll need to keep an eye out for pests, too.

The next section introduces the most common kale pests, and how to deal with them.

What is eating my kale leaves?!

It’s not just humans that enjoy eating kale. Many bugs and pests are attracted to the rich, green leaves.

Aphids can affect kale, just like most other plants. They make their home on a leaf, eat the nutrients inside, and are very hard to dislodge. The best option is to remove and compost infected leaves before the aphids have a chance to spread.

Cabbage white butterfly – also known as cabbageworm caterpillars – will eat holes in leaves, and impact the health of your plant.

Cabbage whitefly occurs when larvae make their homes on kale leaves. You will see a cloud of white ‘dust’ when you move the leaves. This pest weakens the plant, and can make it vulnerable to other diseases.

Cabbage root fly larvae eat the root of the kale, which prevents the plant from getting enough water. If left untreated this can seriously hinder the plant’s ability to grow.

Flea beetles are another pest you may find, and prevention is easier than removal. Consider row covers to keep your kale protected, and a layer of mulch on surrounding soils to prevent beetle larvae developing into adult beetles.

Keep an eye out for club root, too, even though this will not ‘eat’ the leaves of your kale. It is an affliction of the kale root, so you have to look out for signs above the ground. Wilted leaves with a blue tint can signify this problem.

When to harvest your kale

You can usually begin to harvest around the last week of October.

And it’s important to note that you should harvest your kale, even if you don’t plan to eat it! This will give new shoots the opportunity to grow without being smothered by big ones.

Old, unharvested leaves will become bitter and eventually inedible, too. So best to get rid of them early.

Kale is ready to eat when the leaves are soft and tender, and about the size of your hand.

When harvesting, take about a fistful of leaves each time. This will probably be around four leaves from each plant. Again: you want to prioritise harvesting the larger leaves, to give the smaller ones a chance to grow. Leave the topmost bud intact if you want the plant to continue flowering, too.

Be careful not to over-harvest: too few leaves will hinder the plant’s ability to grow.

Kale will keep growing well into minus temperatures, so don’t worry if you’re harvesting after the first frosts! Frost can actually make the leaves taste a bit sweeter, too, thanks to its ability to turn starches into sugars.

Although bear in mind that if you pick after the kale has flowered, it is more likely to taste bitter.

And there you have it!

We’ve introduced the plant and explained why it’s so popular.

We’ve also introduced the best kale varieties to grow in the UK, along with instructions for planting them indoors and outdoors.

If you follow the kale care tips in this guide, you should be met with a bountiful harvest every year.