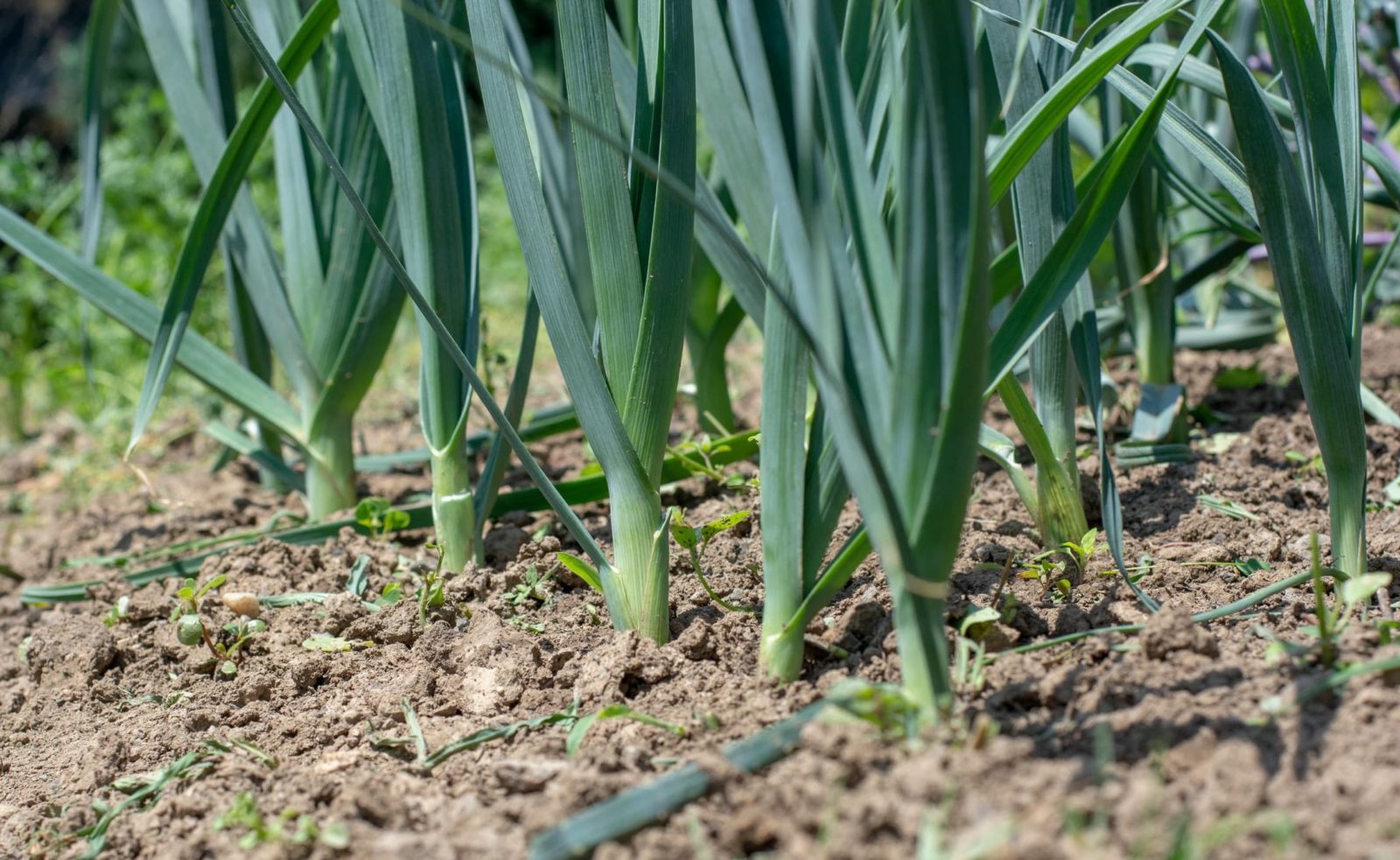 Leeks are a common and popular winter vegetable, so you might like to learn how to grow them in your garden.

Leeks are not the easiest vegetable to grow, and take a lot of time to mature to harvest. But in spite of the investment they require in terms of time, space and effort, they can still be an excellent choice for home growers.

Read on to learn more about leeks and how to grow them in your garden:

Leeks (Allium ampeloprasum ‘Leek Group’) are a common garden vegetable which is a member of the onion family.

Leeks were eaten in ancient Rome and were considered to be superior to onions and garlic. It is believed that the garden leek may have been introduced to Britain during the Romano-British period.

The leek has a number of cultural associations. Most notably, it is one of the national emblems of Wales.

Legend has it that this is because the Gwynedd King, Cadwaladr, told his soldiers to wear these vegetables on their helmets in a battle that took place in a field of leeks.

The tradition is also said to be a tribute to St David, who, it was said, only ate leeks during periods of fasting.

Leeks are, of course, a vegetable with a pleasant, mild, onion-like taste.

Most commonly, the white and pale green portions are eaten.

But it is important to remember that the darker green leaves at the top are edible too, and these should also be consumed to avoid waste. Though tough, they can be good to sauté or add to a stock.

Aside from the flavour, another good thing about leeks is that they are a vegetable that is harvested in the autumn or winter, when there are fewer fresh vegetables around.

This means growing leeks can help you in your efforts to eat food grown in your garden all year round.

Leeks are not only useful for their edible yield. Leeks can also be very useful, like other alliums, as companion plants in your garden.

Their strong smell is said to help in repelling or confusing a range of common garden pests.

Some good leek varieties for the UK include:

Typically, bulbs are planted in spring and then left for the first year. The plant is then harvested for its above-ground growth each subsequent year.

The bulb in the ground is left intact and the plant will regrow from the bulb.  Plants left unharvested will flower, produce bulbils, and drop these to create new plants. Clumps of these can form in the right conditions.

Where To Grow Leeks

Leeks are usually grown in the ground in a garden, but they can also do well in deep raised beds or large, deep containers. Both typical garden leeks and perennial leeks will do best in full sun but can also be grown in partial shade.

The ground into which garden leeks are planted should be fertile, and rich in organic matter. The soil should be moist but relatively free-draining.

Typical garden leeks are great companion plants for a range of common crops in your vegetable garden.

They grow well alongside brassicas, and like other alliums may help to repel or confuse common cabbage pests like whiteflies and cabbage whites.

They also work well planted alongside carrots. Like onions, leeks also have a strong scent which can confuse the carrot fly, while the carrots can confuse or repel onion flies too.

Leeks and celery may also be good companions in the garden. Some say celery planted with leeks even tastes better.

However, you should avoid planting leeks or other alliums near peas or beans, as it may stunt their growth.

And you should consider, when planning your companion planting schemes, that crop rotation is still the best idea. Try to include alliums like leeks within a four-year crop rotation plan.

Perennial leeks work very well as companions for strawberries, and other perennial vegetables – again for their strong scent which can confuse or repel a range of pests.

Leeks are a vegetable that takes a long time to mature.

If you want to enjoy eating leeks from your garden in winter, then you need to sow the seeds in late winter or early spring.

Leeks are usually down in the UK between February (indoors) and April. Leave it much later and your leeks will not have the time to mature.

Leeks are usually sown indoors, in small pots, soil blocks or modules, or in a seedbed in the garden, and then transplanted into their final growing positions when they are around the thickness of a pencil, in early summer.

When planting out leeks in the garden, you should aim for a spacing of around 15cm (or usually up to 4 per square foot).

You can also plant more closely, and pull out some of the leeks to eat while they are still small to leave around 4 per square foot by the end of summer.

Make holes for each leek with a dibber (or the end of a branch), then place a small pencil-sized leek gently in each one. Do not fill back in the soil around each one. Simply water well and allow the sides of the holes to cave in.

Mulch well around your leeks with organic matter to retain moisture, add fertility and suppress weeds.

Caring for leeks is relatively easy and straightforward.

Simply water during dry periods, and add more mulch over time, or earth up, to encourage the stems to form longer white sections.

Make sure that the mulch remains in place over the summer, and remove any weeds which appear between the plants, since leeks will not be very tolerant of any competition.

There are however certain problems commonly encountered by those growing leeks in their gardens.

One common issue is leek rust, a fungal infection. Making sure that the leeks are not overcrowded and avoid watering from above to reduce the chances that fungal problems like this will take hold.

A small rust attack will not kill your leeks. But a more serious attack could reduce your yield. This disease is difficult to eradicate from the soil once it arrives, so practice crop rotation and avoid growing alliums (members of the allium family) in the same bed for the next three years.

Crop rotation and good garden hygiene is also crucial in areas where onion white rot is a problem. This is another fungal infection which can attack leeks.

Take care not to spread soil or plant material from areas that have this soil-borne fungus to other parts of your garden or elsewhere.

You can expect to harvest leeks from late August onwards, around 6 months from planting.

Most gardeners will leave leeks in the garden until they have been exposed to frosts, as this can improve their flavour. Leeks are then usually left in the ground and harvested as needed from October through to December.

When harvesting leeks, use a fork or other gardening tool to pry them up. Don’t try to pull them up by hand or they may break off below the ground.

If you live in a cold winter area, and the ground freezes solid over the winter where you live, you can consider lifting them and heeling them back into the soil in a warmer area where they can be retrieved more easily as needed.

You can also use a mulch of straw or dried leaves to help reduce ground freezing.

You can also harvest all your leeks if you prefer, and preserve them by chopping and freezing, or use them in a huge range of different recipes.

Leeks are a versatile ingredient so you should find no difficulty in making use of the leeks you have grown.