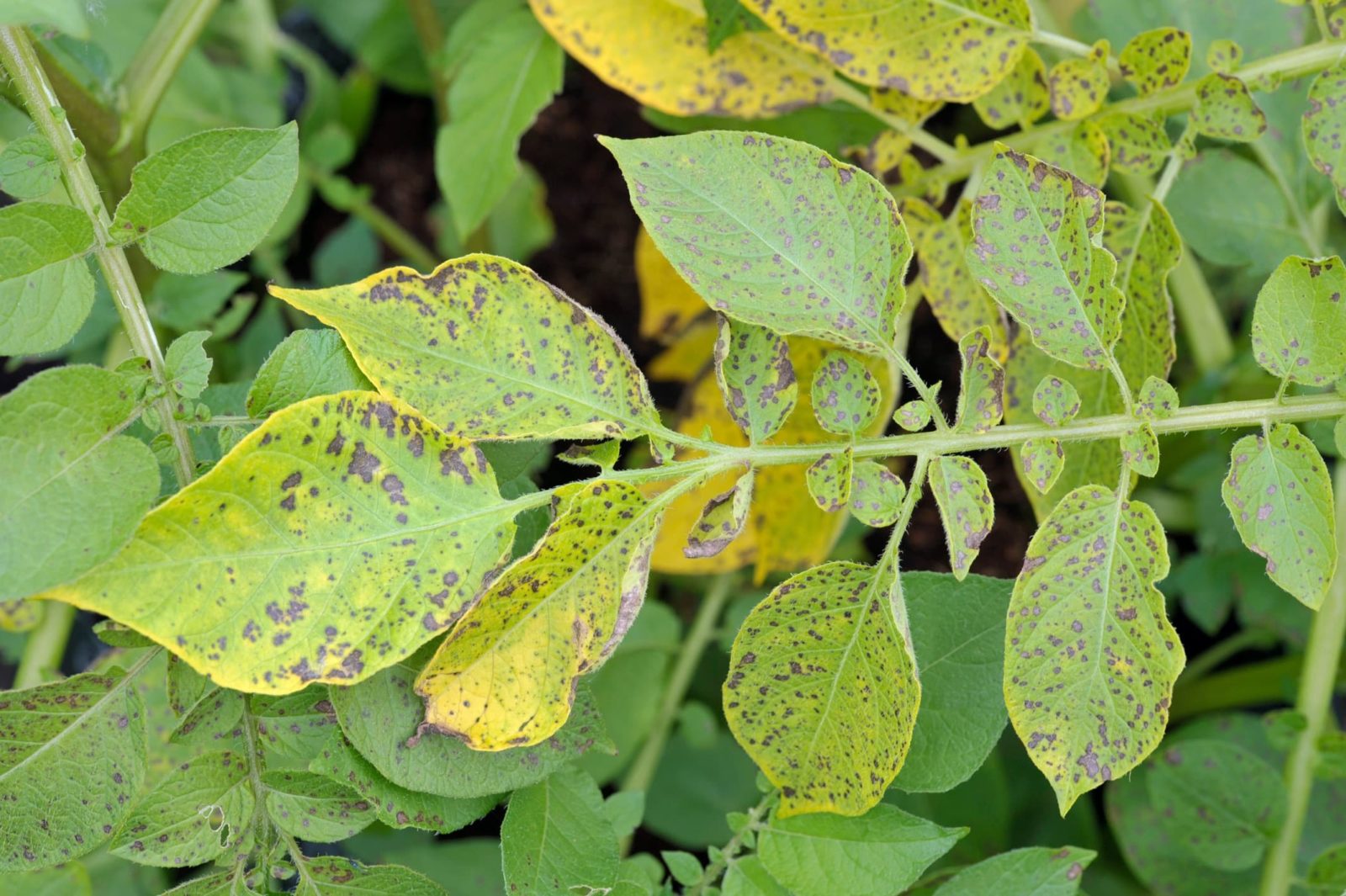 Potato blight is an annoying problem and one that many UK gardeners will experience at one time or another.

It can cause significant reductions in yields and may, in extreme cases, mean that you lose your potato crop altogether.

That said, it is important to recognise that, while it is nigh on impossible to get rid of, it is possible to identify and deal with it quickly, and to take steps to reduce the chances of potato blight taking hold.

What Is Potato Blight?

Potato blight is a fungal infection that can attack potato plants and other members of the same plant family, such as tomatoes. [source]

It is also referred to as ‘late blight’ to distinguish it from ‘early blight’ which is common in the US and elsewhere, but uncommon in the UK. [source]

(If symptoms resembling those of blight occur earlier in the year in the UK, it is usually a case of magnesium deficiency instead.) [source]

Throughout history, late blight has been responsible for a number of catastrophic crop losses.

It was implicated in the famines in Europe in the 1840s, in 1845 in Ireland, and the following year in the Highlands of Scotland. [source]

An over-reliance on the potato crop meant that populations were left vulnerable, and many died when late blight destroyed the majority of the harvest.

Fortunately, most gardeners and growers today don’t have all their eggs in one basket.

Though blight is a common problem, it rarely destroys whole harvests.

And even when the potato harvest does suffer, home growers usually have a range of other crops that may well have fared better in a bad year for potatoes.

Potato blight is caused by a microorganism – a fungus called Phytophthora infestans. [source]

The spores can linger for years in the soil, and since they thrive in damp and soggy conditions, they will tend to be more prevalent when there has been a wet summer. [source]

When the fungus reaches the plants, it will infect them and spread – often very quickly – through the plant tissue.

Potato blight is usually first noticed as brown areas that appear on the foliage of potato (or tomato) plants.

These brown areas will speedily spread into a wet rot that kills the leaves, spreading to the stems and turning them brown too.

If nothing is done, the infection can spread from the leaves and stems to the potato tubers.

If they become affected, potato tubers will have a reddish-brown discolouration below the skin and will become rotten and soft.

Tuber blight may not be immediately obvious when the crop is harvested, but the tubers that have been affected will rot quite quickly in storage.

If blight is present in your area, then unfortunately there is not much you can do to entirely eliminate the risk that it will take hold in your potato crop.

However, there are certain things that you can do to reduce the risk that it will become a major problem:

Firstly, you can consider growing only potatoes that will be harvested before it is likely that blight will become a problem.

First early potatoes are harvested around July, and so will be out of the ground before the blight arrives in late summer.

It is worthwhile noting that even ‘blight resistant’ varieties of potatoes are not invincible.

But you can significantly reduce the chances of severe infection if you choose those with the highest blight resistance levels.

In the UK, some options are:

Some common and favourite varieties are particularly susceptible, and so it may be best to avoid these in areas where blight is a particularly pressing problem.

Water early in the morning if possible, so leaves have a chance to dry out before nightfall.

And try to make sure you water plants at the base – delivering water to the roots where it is needed and avoiding getting the foliage wet.

Wet leaves will make it more likely that blight will take hold.

Make sure you do not place your potato plants too close together and are not overcrowded.

Good ventilation can help to reduce the incidence of fungal disease and keep plants as healthy and resilient as possible.

Earthing up or mulching around your potato plants won’t keep blight away.

But it might offer some level of protection to the edible underground portions of the plant, and ensure that even when the plants above the soil are affected, you still get an edible yield.

Finally, you can reduce the chances of a serious blight problem by making sure that you don’t grow potatoes (or other members of the same plant family) in the same location year after year.

Ideally, you should have a four-year crop rotation plan in place for your annual growing areas.

It is important to check growing and stored potatoes regularly for signs that blight has taken hold.

To be forewarned about blight in your area, you can register for Blightwatch in the UK, which sends out alerts at postcode level.

If you see signs of blight, quickly remove the affected plant material and burn it, or dispose of it well away from your garden and composting areas.

Make sure you practice good hygiene – wash your hands and any tools, avoid touching other plants and spreading the disease.

To reduce the chances of infection of plants currently unaffected, you can consider using anti-fungal organic treatments on the foliage of your plants.

For example, you can spray 10g of bicarbonate of soda in 1 litre of water onto the tops and undersides of all the leaves.

Do so early in the morning to avoid leaf scald. However, this and other anti-fungal treatments are only ever partially effective.

You can also reduce the chances of late blight from setting in by using an activated hydrogen peroxide fungicide or a fungicide containing Streptomyces lydicus – a beneficial bacteria.

However, if a bad fungal infection has already set in, then it may well be too late to do much.

These solutions generally just help to avoid a problem from spreading further.

Be sure to only ever spray an organic fungicide, and only ever as a last resort.

Depending on when exactly blight takes hold in your potato crop, it can be a good idea to cut your losses and remove all above-ground portions of your plants.

Of course, this means that the tubers will not grow anymore, but it should mean that you are able to harvest the tubers.

If 25% of the leaves on potato plants are affected, you should certainly cut off all the stalks near ground level.

Be sure to rake up and carefully remove all the debris from the area.

After around two weeks, the skins on the tubers will be hard and you can dig them up and eat them or store them for later.