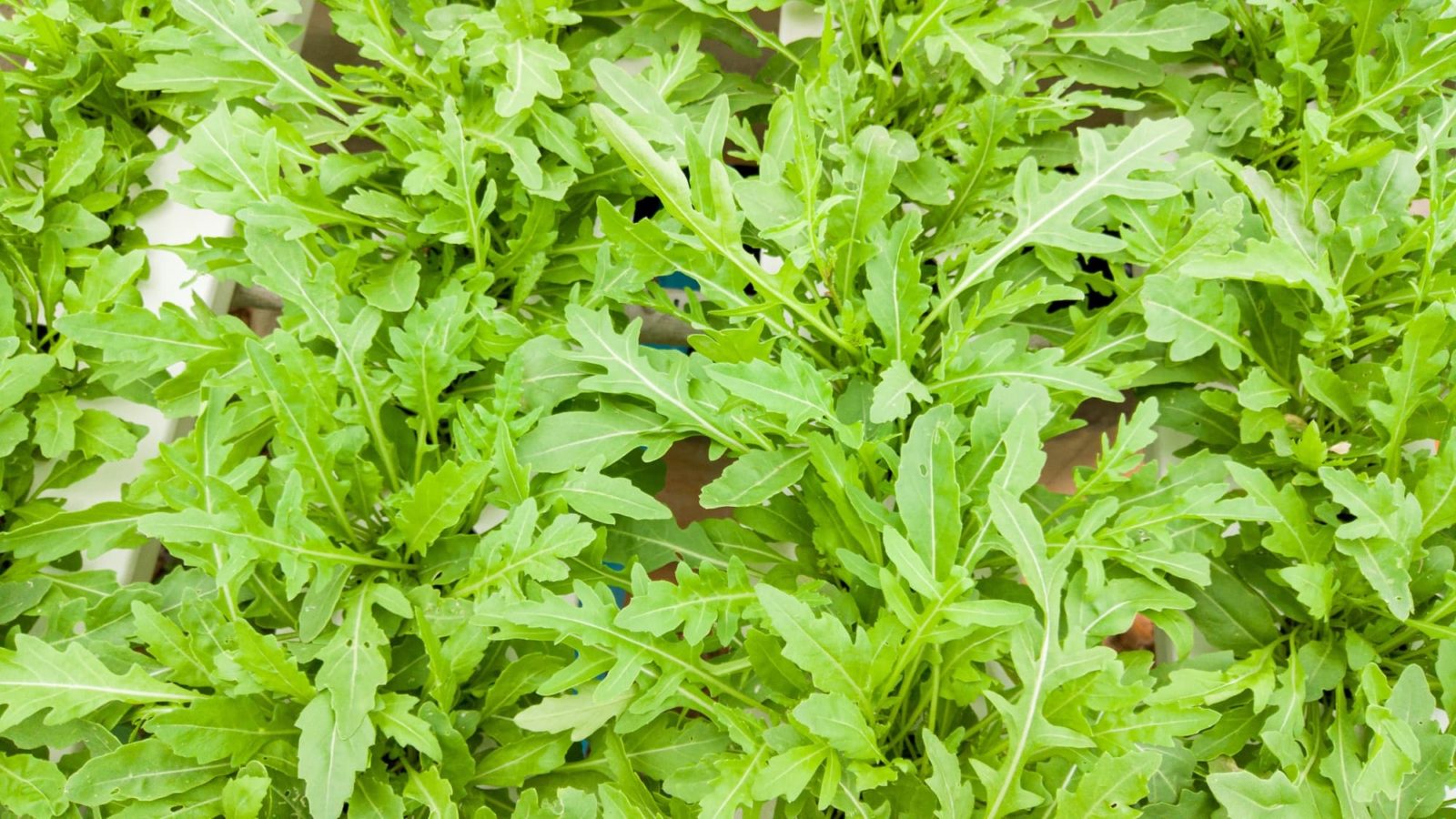 If you like pepper, spice, and leafy greens, Bingo! Your prize is Rocket, a plant whose leaves have a spicy, peppery kick. These leaves can be cooked in casseroles or tossed raw in salads. An ever-increasing variety of Rocket cultivars provides an array of differentiated flavours so that if one variety is right to serve haddock on, another is ideal to cook venison with.

‘Rocket.’ That sounds much more appropriate than ‘Eruca vesicaria’ doesn’t it? The name ‘Rocket’ has a bit of a zing – just like the leaf itself! With a pleasant kick that can be variously peppery, spicy, tart, tangy, and even pungent, this leafy green is both a herb and a salad leaf.

As for Diplotaxis tenuifolia, it is a perennial that is called ‘Wild Rocket.’ It has a sharper, more intense flavour than Salad Rocket and its varieties. Plants of both genera, Eruca and Diplotaxis, are classified under Family Brassicaceae – the Mustard Family. It is little wonder that these plants’ leaves (and other parts as well) have the sharpness and pungency, to some or another degree, that we associate with mustard.

This article concerns itself with both kinds of Rocket. Though Salad Rocket or Garden Rocket is the more widely-known and widely-grown, Wild Rocket is seeing an upsurge of interest. Varieties of both Rockets grow from 25 to 80 centimetres high.

Rocket species are native to Italy and the Mediterranean regions.

They, particularly Wild Rocket, are tough plants that can thrive in poor-quality soils.

They colonise all kinds of ground so rapidly that they are considered weeds or invasive plants in some parts of the world, such as Australia and Arizona.

These plants, having spread from their native regions, now grow readily in temperate locales in both the Old World and the New.

Over the past decade or so Rocket has – ahem! – ‘rocketed’ in popularity in the United Kingdom, and keeping pace with the demand, an increasing number of cultivars have come on the market. These differ not only in their sharpness and pungency but even in their respective flavours. As a result the general rule of Wild Rocket being sharper and more peppery than Salad Rocket no longer holds true because one or two cultivars of Wild Rocket have fairly smooth, mild flavours while a few varieties of Salad Rocket are rather spicy and zingy.

Salad Rocket or Garden Rocket has bright, light green leaves that are gently scalloped. They are also ‘gently’ peppery with but a mild spiciness or tartness. Flavour-wise they are not intense but pleasant, but they must be used relatively fresh otherwise they lose their pleasant pepperiness and develop a harsh taste and texture.

Wild Rocket’s dark green leaves are very deeply parted and serrated. In taste they are peppery and pungent in addition to which they also have a spicy aroma. Flavour-wise this natural variety’s leaves have a tingling intensity, and cut leaves retain their freshness and sharpness for longer than those of Salad Rocket.

Salad Rocket ‘Esmee’ Organic has bluish-green leaves which are heavily parted and sharply serrated. In view of ‘Esmee’ Organic’s ‘medium’ sharpness and its balance it is perhaps the best variety for inclusion of raw leaves in salads and such, whether comparing fresh young leaves or mature leaves to the equivalent of other varieties.

Salad Rocket ‘Pronto’ has bright, almost shiny, green leaves that are moderately parted. The leaves are distinctly peppery and their sharpness or pungency falls squarely between Salad Rocket and Wild Rocket. All three properties, flavour, colour, and shape of the leaves makes ‘Pronto’ especially attractive for salads.

Wild Rocket ‘Olive Leaf’ is a remarkable outlier in the Wild Rocket family. Neither its leaves nor its flavour are anything like those of Wild Rocket! But ‘Olive Leaf’ is indeed a member of that family because it is a perennial but its slightly-scalloped light, bright green leaves are closer to those of Salad Rocket. The aromatic leaves’ flavour is peppery yet nuanced.

Wild Rocket ‘Giove’ has narrow, parted, and serrated leaves of a deep, medium green shade. Going against ‘family principles,’ in taste ‘Giove’ ranks among the subtlest, having the mildest of pepperiness. In fact, it has a proper leafy-green taste and texture, with a hint of sweetness. Great for light salads.

Wild Rocket ‘Wasabi’ has brilliant emerald green leaves that are narrow and serrated but not parted. In taste ‘Wasabi’ is actually very much like its namesake, being not only peppery but having an intense pungency. It can be and, indeed, actually is used as a substitute for Wasabi in Japanese cooking. Great for cooking with meats.

In the wild, Rocket happily grows in fields, roadsides, embankments – any which where. Obviously, it is not fussy about soil or growing conditions.

A halfway decent loam mix will be just fine for growing Rocket plants in. For optimum results prepare a loose soil with some organic manure, chalk, humus, and sand. Soil should drain well.

Soil pH may range from Slightly Acidic to Slightly Alkaline.

The plant will grow well in full sun and also part shade.

How to Grow Rocket

Salad Rocket can be sown in a heated frame from February and outdoors from April onwards. Whether you sow it in beds or pots, both the plant and its use lend themselves to successional sowing. It may be sown every two to three weeks for a continuous supply of fresh leaves through to autumn.

If planting in pots, sow seeds two or three to a terracotta pot of about 25 centimetres diameter.

Give the freshly-sown seeds a good watering so that the soil becomes well wet.

Watering Salad Rocket, an annual, can be a tricky balancing act. If plants are not watered well enough and the soil becomes dry, they will bolt (run to seed). On the other hand, keep watering them a little too well and the leaves will lose their kick and become bland. The trick is to keep the soil just moist.

Weed the bed or pots as you normally would.

As the seedlings grow, thin them so they are about 15 centimetres apart or one to a pot. (The thinnings should not find a place in your compost pile but on your kitchen table!)

If the weather gets hot and your plants are exposed, they must be protected from the hot afternoon sun otherwise the leaves will lose their tenderness and flavour.

You can also start off Salad Rocket in autumn. It can be grown indoors in pots in a sunny spot that gets sufficient sunlight through the morning, and can be grown outdoors if it is protected by horticultural fleece.

Wild Rocket may be grown the same way except that as it is a perennial you do not need to worry about sowing it again the following year. They are also not prone to bolting. Grow as many plants as you need and then judiciously harvest leaves as you need them on a true ‘cut and come again’ basis.

As long as a Wild Rocket plant is not severely harvested or over-harvested it will survive through the winter if it is protected with fleece or in a cloche, and continue supplying you with greens the following spring.

Leaves from plants are ready for picking about one month from sowing.

Pick bigger, older leaves for a more intense taste and for cooking purposes; Rocket can be cooked like spinach. Pick smaller, newer ones for a gentler flavour for using raw in salads or as garnish.

Pick two or three leaves from each plant, harvesting several plants at a time. Do not over-harvest a single plant.

When you notice a plant putting out buds, you have a choice. Cut off the stalks to redirect the plant’s energies to the leaves, or allow the buds to bloom and then harvest the flowers for use in the kitchen.

Likewise, you can also let the flowers wither into seed pods and then harvest the pods – both seeds and pods are edible.

Finally, you can simply allow some selected plants to flower and then run to seed so that they self-seed; thus, your supply of Rocket plants and leaves will continue automatically.

In hot and dry weather do not let the soil dry out and stay dried out, otherwise the leaves will have a harsh, bitter taste.

The one pest you need to keep a watch for is flea beetle, particularly at the seedling and young plant stage.

If you anticipate an attack by flea beetles you can try to head off the problem by growing the plants under fleece. Otherwise release beneficial predators such as ladybugs and ground beetles. Another safe option is to spray organic products like Bug Clear for Fruit and Veg and Neudorff Bug Free.

Bolting is a particular problem with Salad Rocket though not with Wild Rocket. Follow the guidance in section How to Grow Rocket to avoid bolting. In addition be sure that plants are not too close and are about 15 centimetres apart or one to a pot.

Where to Get Rocket

Regular Salad Rocket plants in pots are widely available at nurseries and garden centres. Wild Rocket is also available, just not as widely. Seed packets of each are also found at garden centres.

Seed packets of the more recent cultivars are available online at specialist seed merchants. You are sure to find a few pots of a couple of special varieties at a garden centre that has a good herb-and-veg focus.