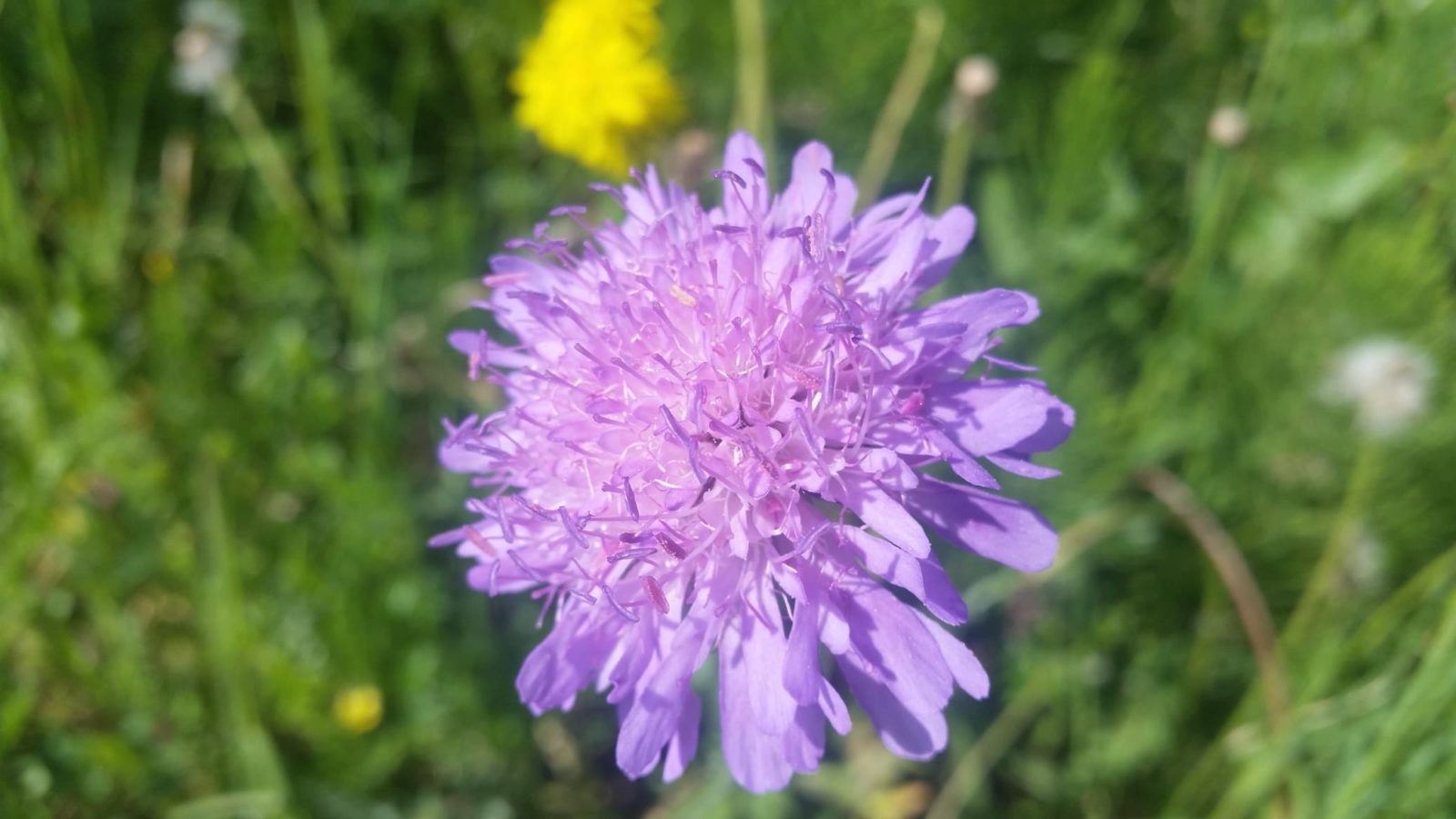 Rich in colours, profuse in blooms, low in maintenance, and charming in appearance – that’s the Scabiosa plant for you. As for said charming appearance, it is the result of the structure of the flower’s receptacle, florets, and stamens, which make it resemble a pincushion! But if you do not care for pincushions, read on— there is a Scabiosa flower to suit every taste.

What do you call a flowering plant whose blooms have such different and varying forms, shapes, and petal arrangements that you would need over a score of descriptions for them? You call it Scabiosa. Or, to add to the confusion, Scabious, Knautia, and Pincushion Flower! Adding even further dimension to the plant is the diverse array of colours the flowers come in, ranging from white to near-black, and in tones pastel through brilliant to saturated. Finally, Scabiosa species come in both annual and perennial types, with even a few biennials squeezed in between.

As such, there’s a Scabiosa variety to suit every taste and every garden, from among its 63 species (which are typically under-counted) and about 240 hybrids and cultivars (not counting synonyms).

As for the various names for this plant, they are are not exactly synonymous. There is some overlap, disagreement, and – that word again – confusion as to which name applies to which plants or which genus.

Scabious used to be the common name for a set of loosely-identified flowering plants, and was – and still is – used interchangeably with the proper genus name, Scabiosa. However, the common and non-technical name ‘Scabious’ actually identifies a subset of plants from Genus Scabiosa, and a subset of plants from related Genus Knautia. And what about ‘Pincushion Flower’? Pincushion is a purely visually descriptive name that identifies many varieties of both Scabiosa and Knautia. The reason is that several varieties have a rounded, clearly convex, receptacle from which numerous and prominent stamens protrude, bringing to mind a pincushion.

One can only hope that this little exposition reduces the confusion and certainly does not add to it!

Where there cannot be any confusion is in what these easy-going plants would bring to your garden: gaiety, butterflies, that little bit of ‘something different,’ and a riotous medley of colours all through summer and even into early autumn.

The Scabiosa genus is a member of the Honeysuckle Family. Its species are native throughout the Temperate and Sub-Tropical zones of Europe, Asia, and Africa. They do not grow in Tropical zones except for a few countries in Central Africa but some species, e.g. Centaurea scabiosa subsp. scabiosa, grow in even the Polar and Sub-Polar zones of Northern Russia, including Siberia. The heaviest concentration of Scabiosa varieties is found in Mediterranean lands.

As a general rule, the basal leaves are entire while stem leaves are lobed or divided. Though the foliage is usually described as ‘grey-green,’ in most species it is a very pleasant bright, silvery-green shade. Except for a few exceptions Scabiosas bear inflorescences. A floret has four to six lobes, usually five. The closer that florets are to the edge, the longer and more asymmetric they are. The stems are stiff and wiry.

Underneath we present an even dozen Scabiosa varieties which include both species and hybrids, and a fantastic range of colours from white through near-black.

S. triandra is a Southern European species whose leaves are bright green and linear, among the narrowest in Scabiosa species. The rounded bloom is a gentle shade of lilac and adding to its charms is its scent which is very attractive to bees and butterflies. Its longish flowering season runs from June through September.

S. graminifolia is also native to Southern Europe, and its linear leaves are so long and narrow that their shape coupled and the plant’s clumping habit combine to make this species resemble a patch of grass! The colour of the solitary and spaced-apart flowers, which exhibit the characteristic pincushion, is the palest and gentlest tone of lilac.

S. farinosa is native to the South-Western part of Africa. It is a long-lived herbacious perennial that often develops woody stems. Though a 60-centimetre tall perennial, it has a mounding habit. Its pincushion flowers attract large numbers of butterflies and bees, and are of a pale, delicate tone of pink or purple, and are not infrequently virtually white.

S.  atropurpurea ‘Black Knight’ flowers from June through August, and its thrilling flower draws butterflies, bees, and birds. But it will also draw and hold human eyes by virtue of its deep maroon hue, verging on black in the centre on some blooms. The white ‘pins’ in the maroon ‘pincushion’ make for a stunning contrast.

S. caucasica ‘Miss Willmott’ bears flowers that can have an irregular or ragged appearance. They are among the largest of all Scabiosa with many blooms between 7 to 8 centimetres across. The shade varies from a Pearl White through Creamy White to Pure White. It is a recipient of the RHS’s Award of Garden Merit.

S.  atropurpurea ‘Chile Black’ has lovely bright bluish-green foliage and bears flowers on erect, long stalks. This variety produces profuse blooms, they have that classic pincushion shape, they have a wonderful scent, and as for the colour, it is truly striking as it ranges from maroon to a startling black.

S. caucasica ‘Fama White’ is a clumping variety that bears flowers on long, upright stalks. These are double flowers that often present a pleasing, symmetrical appearance. Outliers in size, blooms can reach even 9 centimetres. The flowers are pure white and often the stamens too are pure white though sometimes they are cream-yellow, giving the flower a two-toned appearance.

S. purpurea ‘Ebony and Ivory, mixed’ Having presented two near-black and two white varieties, we may as well do both black and white in one shot.  The flower has the dome-like shape shared by many S. purpurea varieties but among all ‘flowerdom’ this is surely one of the most remarkable varieties because one and the same plant produces maroon-black and white blooms side by side, delivering awesome visual impact. This one is a ‘talking point’ in the garden.

S. atropurpurea ‘Fire King’ is a visual delight. The foliage of this bushy plant is a deep lush green which is the perfect backdrop to the dramatic bloom. Exhibiting a perfect disk and ‘dome,’ the florets have somewhat thicker than usual lobes, and the hue is a rich shade of crimson to burgundy that is a stunning complement to the foliage.

S. columbaria ‘Flutter Rose Pink’ is a dwarf variety that reaches only 35 centimetres and is of a mounding, bushy habit. However, it’s all about the flowers with this variety. It has both a long flowering season, blooming all summer long, and a delightful propensity to bloom profusely. Topping it off are the flowers, which are more radially-shaped than most, and of a charming baby pink hue.

S. columbaria ‘Butterfly Blue’ is also quite a short variety with fern-like foliage and a mounding habit. It too boasts a very long flowering season and also blooms profusely. Its flowers attract even more butterflies and bees than other varieties. The small, 5-centimetre flower is fuller with more densely packed florets than ‘Flutter Rose Pink’ and is of a lavender hue tending to blue.

S. caucasica ‘Fama Deep Blue’ is another ‘Fama’ variety with flowers that are similarly symmetrical, and similarly shaped and sized as ‘Fama White’ described above but with a couple of differences. This variety attracts butterflies and bees like there’s no tomorrow. As for the obvious difference, its colour is usually purple but sometimes are an astonishing true blue colour of an azure tone.

The great diversity in Scabiosa species’ habitats means, quite naturally, that they are adapted to different climate zones.

Columbaria varieties usually are hardy from USDA zones 3 to 8 and Atropurpurea varieties from 4 to 11. Caucasica varieties are native to a very wide range and this is reflected in their hardiness zones from 2 through 9.

However, the Scabiosa genus’s species do have one or two properties in common. First, they have a strong preference for full sun. Humidity and dampness play a large part in how well Scabiosa thrive. They do not prefer very wet or humid climates. Moderate or low rainfall and dry weather suits these plants very well.

In general you can’t go wrong with chalky, loamy soils that have a neutral pH tending to alkaline. Soil must be well drained.

When and Where to Plant Scabiosa

In general, you can let Scabiosa ‘run free’ in your garden with other wildflowers for an Alpine Meadow effect. Then can be grown densely in beds or in ‘single file’ for colourful edging of walkways. They are also wonderful companion plants to set off other plants and flowers that would be focal points.

However, the varieties are sufficiently different to call for very different treatments. For example, S. graminifolia would be pefect for a rear patch of your garden or lawn, whereas S. caucasica ‘Fama White’ could be used as clumping companion plants to set off a focal point, be it a rose bush or stargazers, and S. atropurpurea ‘Fire King’ could be given a small flower bed of its own or grown in pots on a balcony.

No matter where you plant Scabiosa, they should be placed in very well-drained soil and get full sun.

All Scabiosa species should be grown in early to mid spring though the perennials can be started in early autumn too.

As annuals, S. atropurpurea are grown by seed. S. Columbaria varieties are usually propagated from basal cuttings and by plant division.

S. caucasica varieties are grown by seed as well as from basal cuttings besides which they are also propagated by division.

As extraordinarily low-maintenance plants, you do not really need to care, as such, for them. All you need to do to keep them happy is guard against some no-nos.

Scabiosa like rich soils but cannot tolerate heavy soils or clay soils. Soil that retains dampness will cause the plant to start rotting. These plants are averse to shade and high humidity.

These plants do not need any fertilizer but an early-season or mid-season application of a 10-20-10 fertilizer will promote blooming.

As with virtually everything to do with this carefree plant, pruning is a simple affair. Withered blooms should be deadheaded; this will keep the flowers coming.

If a perennial variety has become overly bushy or lop-sided, you may prune it by cutting directly above a limited number of leaf stalks. Such species may also be cut back in the autumn.

These remarkable plants are among the most disease-free and pest-resistant.

This is another, and very important, reason that they are so low-maintenance.

Only some species may succumb on occasion to powdery mildew.

Where to Buy Scabiosa

Scabiosa seeds and potted plants of a fairly large number of Scabiosa varieties are widely available. They can be bought from brick-and-mortar nurseries and also ordered online from dozens of U.K. suppliers.