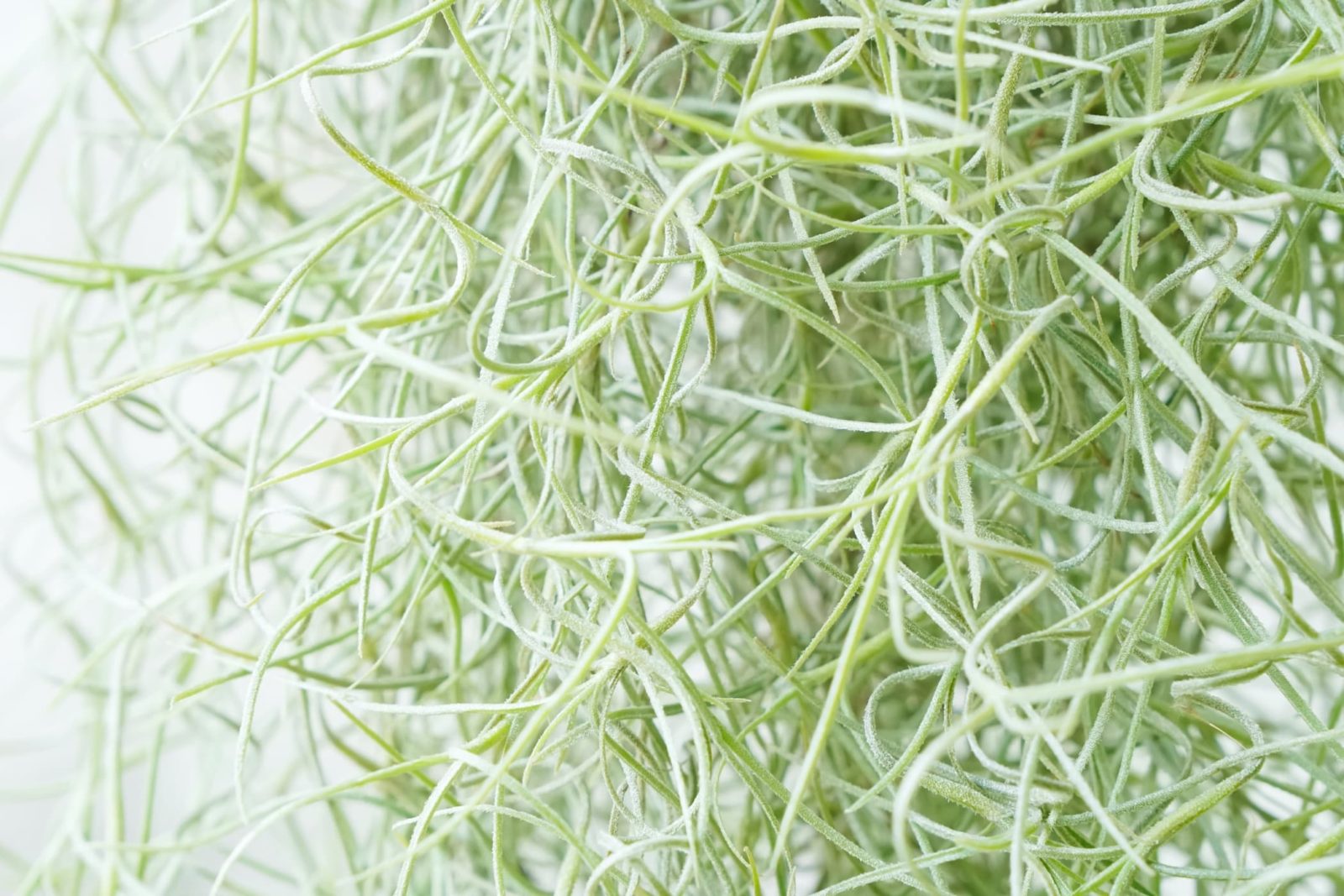 Spanish moss is an interesting houseplant which can also be placed outdoors in summer in the UK.

If you are interested in learning more about Spanish Moss and how to grow it, this simple guide should help you get started, and give you the information you need.

What is Spanish Moss?

The plants hang down, with wiry stems which can reach a length of several metres. They have attractive silvery-grey leaves, and can bear yellow-green or pale blue flowers in the late spring or in the autumn.

The name ‘Spanish Moss’ is a misnomer as this plant is neither Spanish nor a moss.

It is a bromeliad, and the name Spanish has nothing to do with where it comes from. Rather, it was called Spanish moss because it reminded French explorers of the Americas of the long beards of Spanish conquistadors, and the name stuck.

In the tropics and subtropics, Spanish moss grows on large trees, hanging down dramatically from their branches, growing, often prolifically, in full sun to partial shade.

The plant is not parasitic and its presence does not usually harm the trees on which it grows. The plant takes in water and nutrients through its own leaves from air and rainfall.

The only time when it can cause damage to a tree is when it grows so prolifically that it becomes thick enough to exclude sunlight from the tree’s leaves. This can reduce vigour and lower the tree’s rate of growth.

While, in the UK, Spanish moss is generally only grown as an ornamental houseplant, in areas where it grows in nature it has a range of uses.

It is commonly used in arts and crafts, as bedding or fertiliser for flower gardens, for insulation of stuffing and for making evaporative cooler pads.

In the early 20th Century, it was actually used commercially for the padding inside car seats.

Where to Grow Spanish Moss

In the UK, Spanish moss is grown as a houseplant, though it can be placed outside in the summer months.

It is H1C hardy in RHS hardiness ratings. It will require a light, bright location in indirect light which to grow, and will thrive in an area with moderate to high humidity and somewhere with good air circulation.

Temperatures between 10 and 21°C are optimal.

Since Spanish moss likes relatively humid conditions, growing it in a light, bright bathroom or kitchen can be ideal. But Spanish moss can also thrive in other rooms of your home, as long as you make sure that they get the humidity and moisture they need.

Spanish moss can look good when grown in combination with other air plants to create interesting and imaginative displays.

Spanish moss is not usually grown from seed, because it is very temperamental and very slow-growing during the early stages of growth.

Months after planting, it will typically still be only 1cm or so in height. So most people who wish to grow this plant as a houseplant in the UK will purchase a plant.

Remember, these are epiphytic plants. They grown naturally on the branches of living trees, and not in soil.

They take in nutrients through scales on their leaves from water and the air. This is a common example of the type of houseplants that are commonly referred to as ‘air plants’.

Spanish moss plants can be purchased and placed on a piece of wood or other support structure. Typically, oak and cypress branches are said to be good choices as a substrate for cultivation.

Remember, when deciding where to place Spanish moss, that the plants need to hang down from whatever they are resting on.

The long stems need to be able to dangle unimpeded and sway with the breeze. They will not thrive if their stems are caught up in a bunch.

Spanish moss is an easy air plant for beginners, and can be a wonderful, relatively low maintenance choice for novice houseplant owners.

The biggest part of the puzzle is growing it in the right place, and providing the right conditions.

Air plants like Spanish moss are not watered in the same way as soil-growing plants.

They must rather be misted regularly. It is also a good idea to give Spanish moss a soak periodically.

Submerge the plant in water for an hour or so so it can absorb the water then shaking off excess water and returning the plant to its usual growing position.

Make sure the plant is not left waterlogged for too long, as it can be prone to rotting.

Let it dry out between soakings. For both misting and soaking, it is best to use rainwater or distilled water if possible.

Opinions differ as to whether it is necessary to provide a feed for Spanish moss.

Some choose to add a specialist liquid feed for air plants to the water solution when misting.

Propagation of Spanish moss is easy. Separate groups of strands and each one will keep growing and eventually (though rather slowly) create a dense new plant.

Spanish moss is an interesting epiphytic air plant to consider growing in your home.

If you are looking for an interesting ornamental houseplant, this could be a good option for your consideration.

While Spanish moss will always look most impressive in its natural state, hanging in profusion from large mature trees, it can also be an interesting talking point in your home.