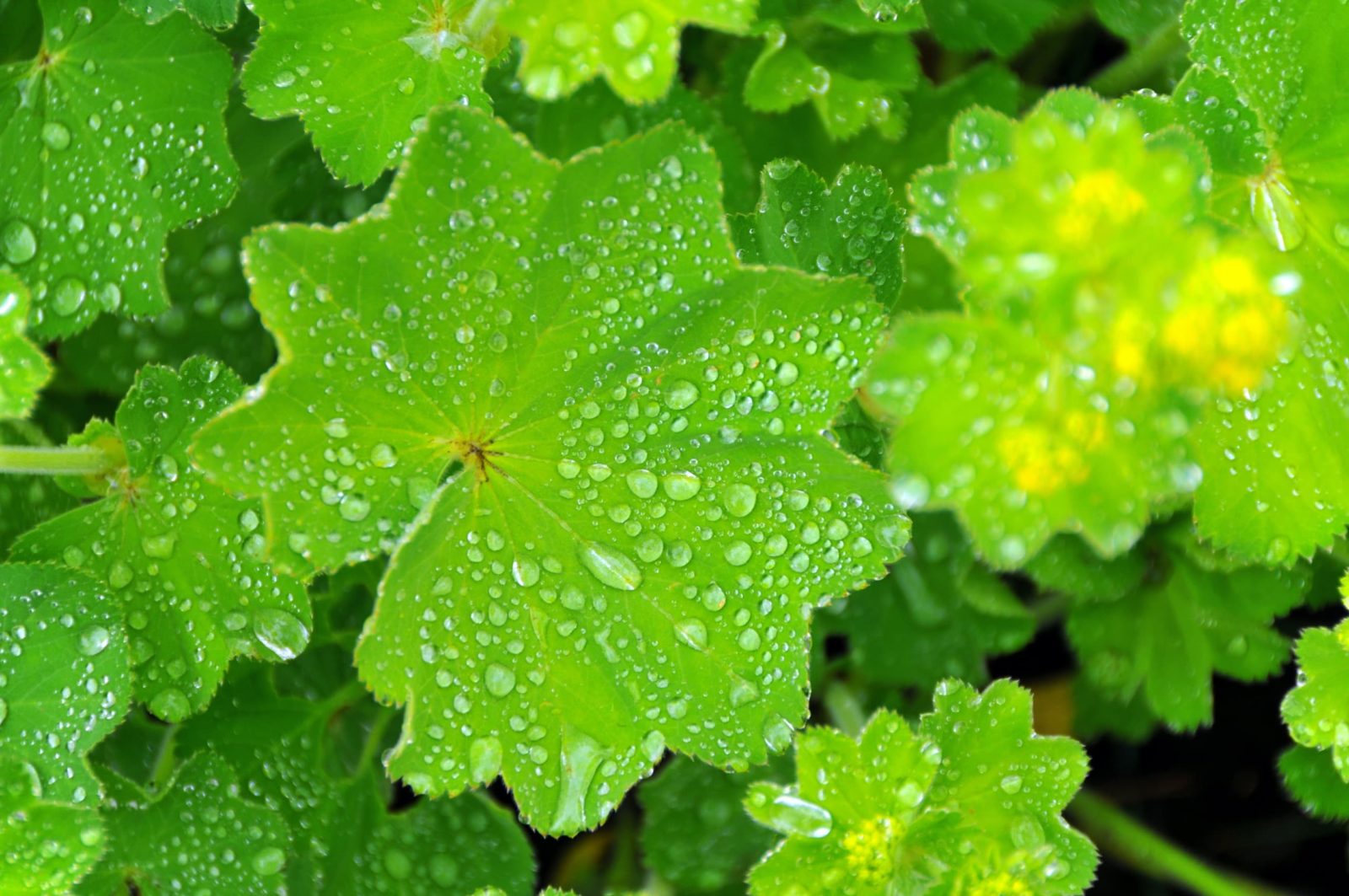 Alchemilla, commonly called Lady’s Mantle, is a perennial. Most of its 300 species grow freely mainly in the temperate and montane zones of Europe and Asia, ranging from Finland down to Turkey.

These herbaceous plants occur in clumps and have compound leaves that are lobed or divided, with serrated edges. Come summer, clusters of tiny polysepalous flowers make a demure appearance.

The Plain Jane of the Family

Curiously, this humble plant belongs to the same Botanical family, Rosaceae, as does the most popular plant of all: the much-feted rose. Other genera of this family include almost all the berries plus peaches, pears, apricots, plums, and more, so our Plain Jane Lady’s Mantle is the poor country cousin among its distinguished family’s members.

Plain Jane or not, many Alchemilla species do have their own merits, and herewith a few examples. Garden Lady’s Mantle can be used for borders and ground-cover in mature gardens, or to lend a ‘country-side’ effect. Diadem Lady’s Mantle is famed as a natural remedy and is known to possess anti-microbial properties. And Common Lady’s Mantle (Alchemilla vulgaris) is the ingredient of an anti-oxidant, healthful herbal tea that is particularly useful for a “lady’s” troubles.

Unlike most garden plants, Alchemilla does not have stems, but, has rhizomes. These are underground or sub-soil stems, not to be mistaken for roots. These underground stems connect the surface shoots and the root system of the plant. The significance of rhizomes is that they play a part in plant reproduction, and, hence, is a botanical fact of value to the gardener.

This little plant’s small flowers have no (proper) petals and are comprised only of sepals whose colour ranges from yellow through lime green to chartreuse depending on the species. Enhancing the prettiness of the plant, its scalloped leaves have soft hairs, even silken hairs.

The colour of the foliage varies from light green through olive green while some species have bluish-green leaves. A full-grown plant has a mounded appearance; as a result, a patch of Lady’s Mantle makes for a pretty picture of gently undulating mounds.

Flowers in all shades of purple, from mauve to violet, and pink are especially well set off against a backdrop of most Lady’s Mantle varieties.

Most Alchemilla species are super-hydrophobic or super-water-repellent.  This ‘phobia’ of the Lady’s Mantle brings about its special charm: coruscant, dew-like water droplets coating its leaves.

It is this very super-hydrophobic characteristic that has given the Alchemilla its name. In ancient times alchemists believed that the plant purified water and exuded water in a highly purified form – transmuting the common into the rare, quite like an alchemist. They even used this purportedly highly-purified water to assist in their alchemical endeavours! In Latin the suffix -illa indicates a feminine noun form, loosely it means ‘she;’ hence, a modern translation of Alchemilla would be ‘Female Alchemist.’

German botanist Jerome Bock a.k.a. Tragus (1498-1554) christened the plant ‘Frauenmantle,’ which is the plant’s informal name and which translates to “Lady’s Mantle.” Swedish botanist Carl Linnaeus (1707-1778), “Father of Taxonomy,” even used this name.

The plant is native to a swath of land from Greece to the Caucasus and spanning Western Russia. It is common in Central Europe, Eastern Europe, and the Mediterranean and likely has its origin in these regions. This wildflower adorns hillside and meadowland, riverbank and lakeside. Most species grow from one foot to two feet.

A Sampling of Varieties

Alchemilla Ellenbeckii is at the lower extreme in height, growing to only about two inches. Its silver-edged leaves are less than an inch in width.  The Dwarf Lady’s Mantle of Eastern Europe is also at the short end of the scale, growing to only half-a-foot. With its clumps of palmate leaves, it is often used as groundcover. At the higher extreme is Alchemilla mollis Robusta type which grows to two feet tall and also two feet wide.

Perhaps Alchemilla conjuncta combines the best qualities of the species. It is hardy in severe and wintry climates, attains a height of about one foot even, bears lime-to-chartreuse flowers, and an attractive silver edging adorns its leaves. Finally, this is one Alchemilla that is not an aggressive self-seeder and, so, it will not try to conquer your garden!

Alchemilla species are separated into further types and cultivars. For instance, Alchemilla mollis or Garden Lady’s Mantle encompasses several cultivars.  As examples, the Irish Silk variety grows to two feet while Alchemila alpina is only half that height; Irish Silk is valued for its profusion of blooms while Alchemila alpina has the distinctive feature of silver-rimmed leaves. Splitting the difference in height, Auslese reaches to about a foot-and-a-half and its flowers are a striking lime colour.

Besides borders and edges, Lady’s Mantle are often used in cottage gardens and rock gardens. Where Alchemilla is concerned, be imaginative! For example, you can make sharp use of a short or dwarf species to edge and line your walkway or driveway.

How To Grow Alchemilla

First, the good news – and the bad news. If you already have some or another Alchemilla plants, you will not need to grow those, for Alchemillas self-seed aggressively and thereby also ‘self-grow.’ Indeed, they do so to the point of becoming invasive during prime season.

You can propagate Lady’s Mantle from seeds or seedlings, or by division, also called separation.

Seeds can be sown indoors in pots or directly in the chosen spot in your garden. If sowing outdoors, do so in early spring after any possibility of frost. Sow seeds 12 to 15 inches apart, cover with a sprinkling of soil, and water regularly and well. It will take three to four weeks for the seeds to germinate.

If sowing indoors in pots, do so one-and-a-half to two months before your projected transplant date which should be after spring’s last frost. Transplant when Alchemilla mollis and/or similar species have grown to about four inches. Ideally the soil should be rich, moist and humus-based.

Any potted seedlings acquired from a friend or a nursery may be transplanted using the same guidelines as above.

Alchemilla are easy to divide or separate because of the thick sub-soil rhizomes and laterally-traversing root systems. Divide the plants in spring or end of summer, before or after flowering season.

Caring for the Lady’s Mantle

The Lady’s Mantle – unlike a bemantled lady – is not at all fussy and requires but little care and attention. It is a creature of simple needs but will appreciate any pampering that comes its way.

Alchemilla varieties grow well in most any soil – be it chalky, loamy, clayey or even sandy – so long as the soil is kept moist (but not wet) and well drained. Most species do not tolerate droughty conditions so ensure that your plants do not sit in dried-out soil for any great length of time.

They thrive in any and all light from more than half shade up to full sun; however, most species need to be protected from full sun during a hot summer. In such weather, make sure to regularly water your plants and give them midday shade.

If you wish to pamper your Lady’s Mantles, consider the following tips.

Alchemilla does best in soils of pH 5.5 and 7.5. Measure your soil’s pH value and, if necessary, acidify or alkalinise. Add humus to the soil, especially in dry or hot climates. Though fertilizer is superfluous, if your Alchemilla are not thriving use slow-release organic fertilizer in spring.

If you have planted Mediterranean or Central European varieties of Alchemilla in USDA hardiness zones 3 or 4, you may apply a coating of mulch. Take care to mulch around only the sub-soil rhizomes and not around any part of the above-soil stalks or shoots.

It takes two years or more from germination for Alchemilla to bloom, so, no matter how much you may pamper seedlings and young plants, do be patient.

Alchemilla is one of those uncommon plants for which an ‘anti-growing’ tip is called for. They self-seed to the extent of running riot and even becoming an invasive species. To keep this trait in check, move fast to deadhead spent flower stalks.

Pruning as such is not necessary for Alchemilla. What you could do is to deadhead withered flower stalks and you may be rewarded with a second flush in late summer. If Alchemilla foliage or flowers appear worn or untidy, cut back the stalks to ground level right after the flowering season is over, and new growth will start to sprout. You can obtain fresh growth at any time during the season by cutting back the plant.

As most Alchemilla species self-propagate quite rapidly, you may get undesired seedlings in stray parts of your garden. If so, uproot them early.

While Alchemilla species are common in Central Europe, Eastern Europe, and the Mediterranean region, it is endemic throughout Europe and the Caucasus region of Asia. It is found in sub-arctic regions and some montane zones of the Americas, Africa, and Asia, with a few species being native to these latter regions.

Alchemilla mollis or Garden Lady’s Mantle, the most widely-occurring and popular species, is suited to a wide range of USDA hardiness zones from 3 through 8 and tolerates more than half shade to full sun but may scorch under the sun in high heat in summer, especially in zones 8 and 7. It flowers from June to September in the United Kingdom.

Alchemilla is essentially a hardy herbaceous wildflower. The vast majority of species are not too picky about either soil or sunlight. All they need to survive is periodic watering or access to water.

Where To Buy Alchemilla

Alchemilla, with its wide variety of species and types, is concomitantly sold in a wide range of prices but in the main, they are quite affordable. They are available from nurseries, besides which mail order and online stores supply potted plants.

The ease with which you can buy it depends on the particular species or cultivar you are interested in. As an example, Alchemilla mollis and Alchemilla erythropoda have numerous suppliers but Alchemilla epipsila and Alchemilla faeroensis var. pumila are supplied by very few nurseries or stores. With this in mind, if you are looking for a popular or common Lady’s Mantle, you need go no further than your local nursery, but if you are interested in a rare or exotic variant, you will need to search online or contact horticultural societies.

Because Alchemilla self-propagates so prolifically and dividing the plants is quite easy, you may not need to buy it at all – you could get a few plants from a neighbour or a friend.

Alchemilla is generally not prone to diseases and is pest-resistant (which are indicators of its healing qualities). For these reasons too it is a low-maintenance plant.

The only problems to watch out for are scorching and fungus. During sunny and hot summer days, protect the plant by giving it shade. Fungus may attack the plant in very humid conditions and particularly so if the crown remains damp.

While deer and rabbits give Alchemilla a pass, cattle, sheep, and horses will happily chomp on most species so if you live in the countryside or in farmland, watch out for the mantle-munching ruminants.