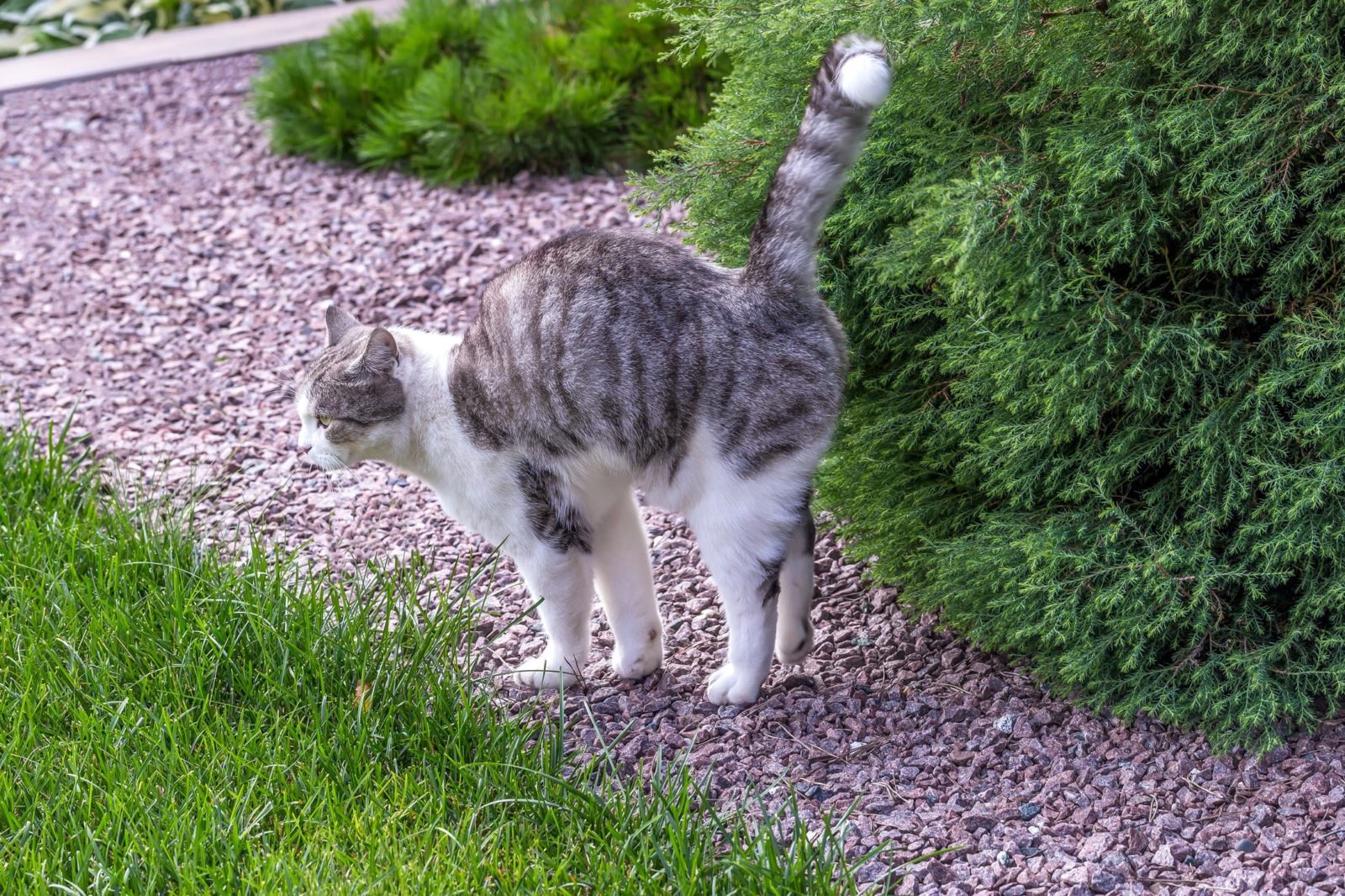 “How do you stop cats pooping in your garden?”

It’s a question that haunts gardeners across the country, but thankfully there are some simple steps you can take to stop these feline visitors leaving unwanted contributions in your garden.

This guide focuses on plants that provide a natural and inoffensive way of keeping cats out of your garden, so that you can enjoy the peace of mind of not having to clean up their mess, without causing them any long term discomfort or distress.

Why Keep Cats Out Of Your Garden?

You may be wondering why people take steps to keep their gardens cat-free? Everyone loves cats, right?

Unfortunately, while they are cute, their excrement can have a real negative impact on your garden.

Contaminated soil is a problem for plants and gardeners, so it’s best to prevent it from happening in the first place. [source]

Cats are also known to dig soil to prepare an area to be used as a toilet, which can be detrimental to plants or crops being grown there.

Rather than inspecting flower beds every day and removing unwanted manure donations by hand, many gardeners make the decision to keep cats at bay by other means.

Which brings us to the next question…

If the cat polluting your garden belongs to you, keeping it confined to the house probably doesn’t seem like the fairest option.

Similarly, it will be a hard sell to convince your neighbours not to let their cats roam outdoors.

And it’s not particularly practical to fence your entire garden off to the degree that would be required to prevent cats from finding their way in: they’re very agile creatures, able to jump up to eight feet into the air.

So unless you want a garden like Fort Knox, the answer lies elsewhere.

Because cats have a very keen sense of smell, they can be deterred from visiting gardens through the use of certain plants.

Which Plants Keep Cats Out?

The following twelve plants are renowned for their ability to keep cats away.

They are best situated at entry points to your garden or mixed into the borders of flower beds.

Cats will be less inclined to cross them or walk past them due to the smell or texture.

They’ll be wary of jumping over, too: especially if they can’t see past the plant.

We’ve put this at the top of the list because the smell that cats find so unpleasant is what makes the plant so appealing for humans, making this a very popular cat deterrent.

Lavender grows all year round and will provide a nice purple hue to your flower beds.

The more creative chefs amongst you may be able to incorporate it into your culinary efforts as well.

Following on from the pleasant smell of lavender, rosemary is another popular cat deterrent with a human appeal.

It shares the same benefits as lavender – evergreen and attractive – but can be used more easily in your cooking.

An ornamental herb that flowers with bold yellow colouring.

It is quite short-lived and has a shrubby habit.

The plant is said to have an offensive smell and taste for cats, so they’re unlikely to tolerate being in its presence for long!

Unfortunately, some other plants don’t like the curry herb either, making this a less popular choice than some others.

Still, it’s good to know all your options.

Cats and other animals don’t like the smell that’s released when they brush past this plant, so they’ll take steps to avoid it.

A member of the mint family that emits a smell similar to peppermint when crushed up or brushed past.

As with the other strongly scented plants in this list, cats aren’t a fan of the smell and would rather avoid it entirely.

A native of Africa, India and Indonesia, the jury is out on whether this plant works. [source]

Many websites claim that the scaredy-cat plant – Plectranthus Caninus – will naturally repel cats and other animals, but Wikipedia is more sceptical, stating that “no research currently exists that supports that usage”.

If you take a chance with this plant, make sure you don’t pay over the odds from a seller trying to leverage its name and reputation.

7) Any Plant With Thorns

Spiky thorns are a less subtle deterrent than smells and scents, and no cat is going to risk skewering itself to go to the toilet.

If you opt for the thorny approach you have lots of options: rose bushes will give you pretty flowers if you tend them carefully while still keeping cats at bay, whereas dense shrubs like blackberry or even holly will create formidable barriers.

Shrubs are especially effective as border defences: if a cat comes up against a thick wall of spiky holly on their way into your garden, it’s likely that they’ll turn around and look elsewhere instead.

If you want to come at things from another angle, you can plant catnip in one part of your garden to lure cats away from other areas.

This plant – also known as catswort, catwort, and catmint – gives cats a natural high that most can’t resist.

The dried form is popular at pet shops and is used in all sorts of cat toys, but not many people know that you can grow your own at home.

If cats smell this they’ll almost certainly stop to investigate, so consider planting a little bit in a tucked away area of your garden to tempt the cats away from your prized beds.

Other Methods To Deter Cats

Consider this section a bonus: here we’ll detail a few other ways to keep cats away from your flower beds.

Laying mulch on top of your soil is an effective defence because it looks less appealing as a makeshift litter tray than fresh soil.

Cats aren’t fans of other surfaces like chicken wire or specially made spike mats, either: laying these down is another way to encourage them to go elsewhere.

Tapping back into their sense of smell, you can use other scents to keep cats away.

One fearsome example is lion dung, which tricks cats into thinking a bigger cat has already claimed this patch.

If you’re less interested in psychological warfare, things like citrus, coffee grounds, vinegar, or even tobacco will put cats off.

You can scatter these things (lemon peel, used tobacco, etc), or use sprays that contain their scent.

Remember that you’ll need to replenish these smells when you notice cats coming back into the garden, as they’ll fade over time.

This is more likely after strong rainfall.

What If A Cat Already Pooped In My Garden?

If a cat has left a present before you’ve had the chance to put up your plant-based defences, there are a few steps you can take to safely remove it.

Scoop the poop into the bag along with a couple of inches of soil beneath it to make sure you’ve got the lot, then tie a knot in the bag and throw it in the bin.

(Note: it’s not safe to compost cat droppings, so you’ll want to throw it in your main bin).

Disinfect the gloves and the digging tool before using either again, just to make sure they’re not contaminated.

And There You Have It…

While cats are undoubtedly adorable, their presence (and presents) can be detrimental to your garden.

Keeping them out with barriers and fences is tricky thanks to their agility, so many gardeners turn to more natural solutions.

A keen sense of smell means that cats will take steps to avoid plants whose scents they dislike, and this can be used to your advantage.

By planting the right things in the right places, you can discourage cats from visiting your garden.

There are a few other methods too, mainly reliant on strong smells.

With the right combination of the tips in this list, you’ll be able to keep cats at bay without causing them any harm and while keeping your garden in top shape.