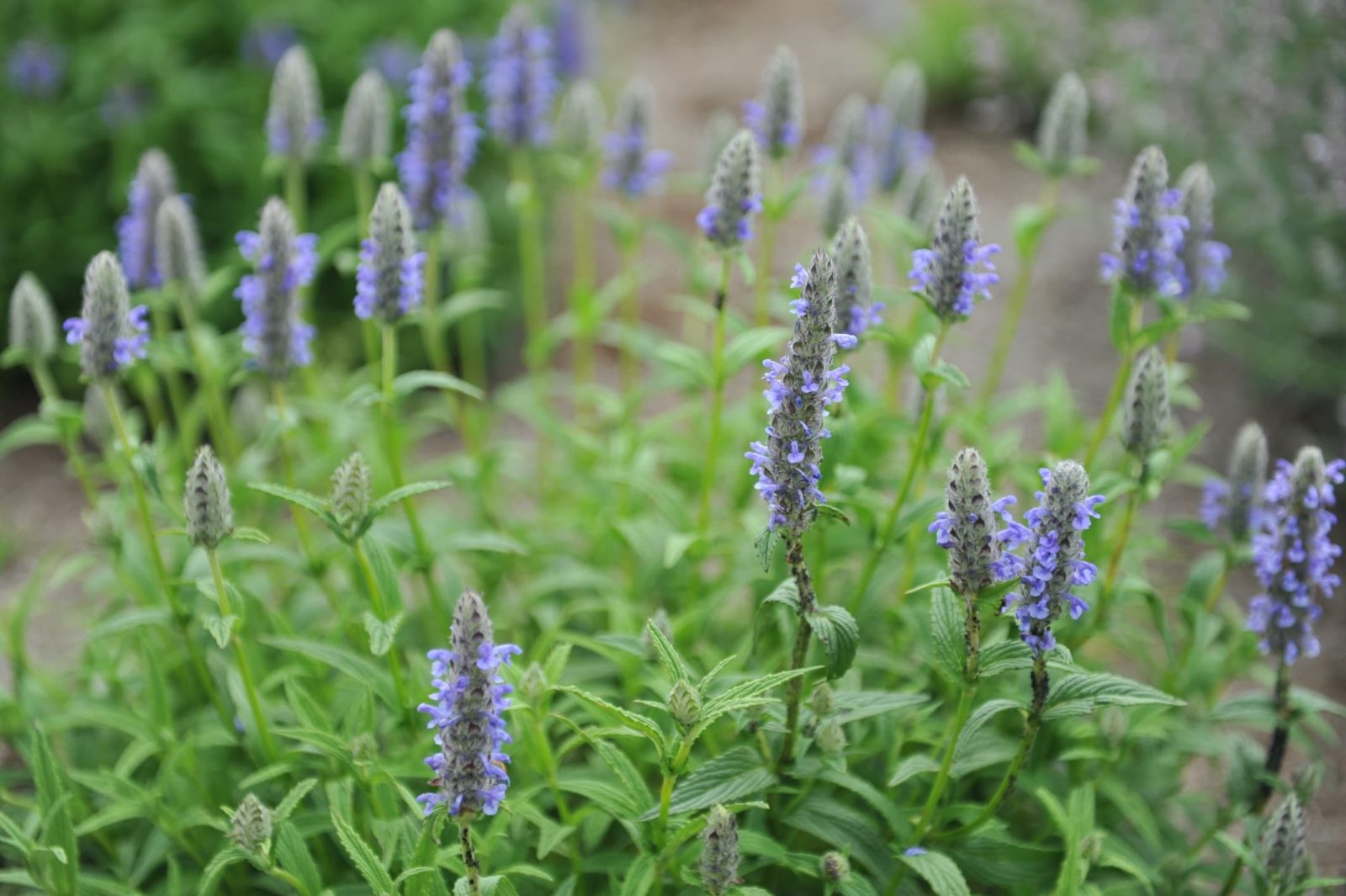 Catmint is a group of dependable perennials that can be a great choice for many gardens.

Catmint is perhaps best known for its effect on felines. But cats are not the only ones who can be intoxicated by this beautiful and useful plant.

If you choose to include it in your garden, you will soon see why it is such a popular choice.

Catmint is the name given to a number of plants within the Nepeta genus, in the Lamiaceae family.

The plants of this genus are native to Eurasia and Africa, and some have also naturalised in North America.

The common name catmint is given to these species because of the effect they have on domestic cats.

A chemical called nepetalactone in these Nepeta species binds with the olfactory receptors of cats and makes them temporarily euphoric. Around 2/3 of cats are strongly attracted to these plants, though some are not bothered at all by them.

These plants are usually herbaceous perennials, with tubular flowers often in lavender-blue hues.

While the term catmint is applied broadly to a number of species within this genus, it can also be used to refer more specifically to Nepeta cataria, which is also referred to as catnip.

This is said to be the most aromatic catmint, but more ornamentally appealing species and hybrids are available for gardeners.

If you want a perennial plant which will flower well over a long season (late spring to late summer), which makes a great informal edging or border plant, and which is great for wildlife in your garden, catmint can be an excellent choice.

They are easy to grow and very low maintenance.

Catmint can be used to attract cats to specific parts of your garden to keep them out of vegetable plots and other areas.

It also attracts a wide range of beneficial wildlife, including butterflies, bees and other pollinators, and beneficial predatory insects which help keep pest populations down. So this means that it can be a great companion plant for a range of common crops and other garden plants.

Catmint is also commonly said to repel a range of insect pests, such as aphids and flea beetles, for example. And may help in holistic and organic pest control (at least to a degree).

Nepeta cataria also has a range of uses for us, beyond the garden. The young leaves can be eaten raw in salads or as a garnish and they have a mint-like flavour.

They can also be used to make an aromatic tea. It should be infused in a closed container to retain the essential oils – and not boiled, as this can spoil it.

There are several different species within the nepeta genus to consider growing in your garden. These include:

Where to Grow Catmint

Catmint mostly prefers a site in full sun, though some species, like Nepeta subsessilus will cope with light or dappled shade.

Most Nepeta species will thrive in dry and free-draining soil, though N. kubanica and N. nuda do better on soil which is a bit moister.

Catmints are usually pretty tolerant of dry conditions, but cannot tolerate permanently wet soils. In such conditions, rot can set in. All catmints will struggle in deep shade.

Catmint can be grown in a range of different settings in a garden. It can work well within a sunny herb garden, alongside other herbs which like sunny and relatively free-draining conditions.

It can also work well as edging around a productive annual garden bed, along a pathway, or as edging for a patio or paved area. Or it can also be integrated into perennial beds or borders alongside other flowering perennial plants.

In small spaces, catmint can also be grown in pots.

Catmint can be sown in March or April, and planted out in May or June.

Pot grown plants can also be purchased throughout the year, though the best time to plant these out is in the spring or autumn.

You can also plant out in summer though it will be important to keep the new plants well-watered during dry periods until they have become established.

Most catmints should be spaced at 30-60cm apart, though this will vary depending on the species and specific variety you have chosen.

Grow catmint as a border companion plant around annual fruit and vegetable beds.

Grow catmint at the front of a fruit tree guild to attract beneficial insects and potentially help with repelling certain pest species too.

In perennial beds or borders, consider planting catmints with, for example:

When Nepeta is placed appropriately, it is a great choice for a low maintenance perennial garden scheme.

Though it will flower and look good over a long period, it will take up little of your time.

Newly planted catmint should be watered well during dry spells during establishment.

After this period of time, the plants will largely obtain enough water from rainfall and will require little ongoing care.

These easy-going perennials, when placed in the right positions, should take up very little of your time and will be a high-value addition to your garden.

If you are growing catmint in containers, remember that you will have to water a bit more frequently than when plants are grown in the ground.

Nepeta flower over a long period from late spring to late summer. But it is a good idea, for the best blooms, to trim them back after flowering, as this will keep the plant neat and encourage further flowering.

Once the growth dies back in the late autumn, it is best, in a wildlife-friendly garden, to leave the remaining foliage in place until spring.

The dead leaves are a hibernation spot for ladybirds and other creatures, so leave further cutting back until early spring so they have a good spot to overwinter.

Catmints will usually be hassle-free and don’t generally have a lot of issues with pests or diseases. Cats which are attracted to the catmint may roll around on it and damage a clump, but will not usually destroy the plants altogether.

Slugs can occasionally be an issue with young catmint plants. To prevent plant losses and keep slug numbers down, make sure you have plenty of wildlife that eats slugs in your garden.

If necessary, keep an eye out and remove slugs by hand, or place slug traps if there is a severe problem.

When the summer is very dry, powdery mildew can sometimes occur and you may see a white coating on the leaves and stems and occasionally, there may be dieback.

If this happens, cut off, gather up and remove affected plant material as soon as possible to prevent its further spread.

To prevent this from happening, it is a good idea to divide the clumps every few years, once you spot a decline in flowering.

Of course, division of mature plants does not just give the existing plant a new lease of life. It also allows you to propagate new catmint plants to give away, or place elsewhere in your garden.

As you can see from the above, catmints can be a wonderful choice for a range of settings, and are a low-effort, high reward plant choice for many sunny gardens.