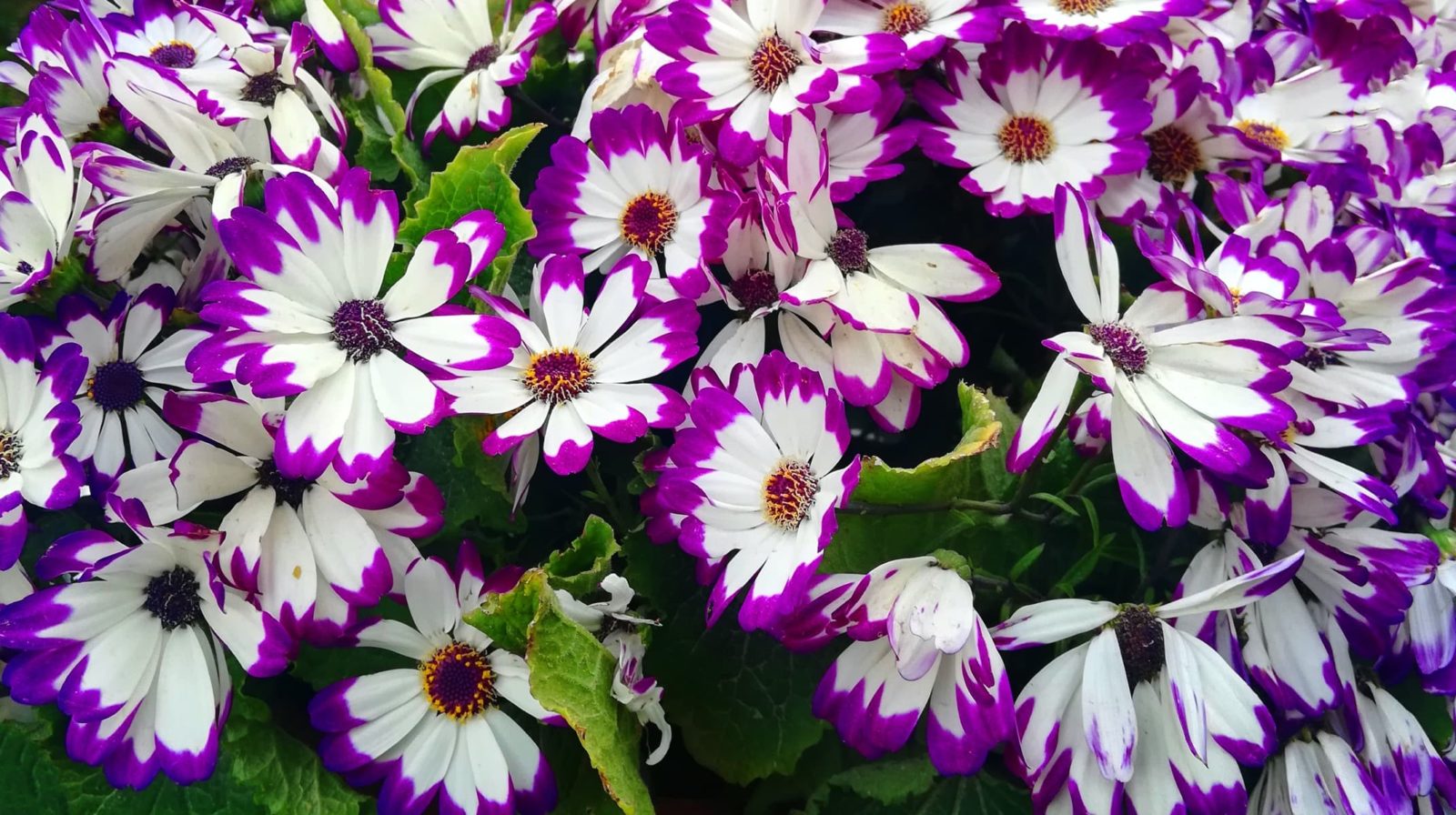 Cineraria are popular florists plants, but there is some confusion over the name.

Cineraria is a term often applied broadly to plants in the Senecio genus or other related genera.

It is also a name used to refer to Pericallis x hybrida, sometimes called ‘Florist’s cineraria’, a group of hybrids bred from Canary island species now technically referred to as Pericallis.

Strictly speaking, the genus Cineraria is now restricted to a smaller group of South African plant species. Many of the plants commonly referred to as Cineraria are not actually recognised by botanists as Cineraria anymore.

Nonetheless, there are two main types of plant referred to as Cineraria which are grown in UK gardens. These are the types that we will concentrate on in this article.

In this article, we will talk about Senecio cineraria and Pericallis x hybrida,  since both of these plants are commonly grown as pot plants or, less commonly, as bed/border plants in the UK.

Senecio cineraria, ‘dusty miller’ or ‘silver ragwort’, is a subshrub typically grown as an annual in UK gardens. It is correctly known as Jacobaea maritima, though is still widely referred to by the other name(s).

It has striking, silver-white leaves that look like they have been dusted with frost, which means that they stand out well against green shades of foliage, and help to add interest to pots, planters, beds or borders.

It is H4 hardy which means that it is hardy throughout much of the UK, and may well overwinter outdoors in a sunny, sheltered spot.

Though usually grown for their foliage rather than their flowers, these plants sometimes also have yellow, daisy-like flowers in summer.

Pericallis x hybrida, are evergreen perennials which are also often grown as annuals in the UK.

They form low clumps of dark green foliage, and bear loose groups of bright coloured blooms over the summer months.

They are often H3 hardy and may overwinter successfully in a greenhouse, or in the mildest parts of the UK.

Their large daisy-like flowers can be very attractive in beds, borders or containers over the summer months, and come in many shades from blue, to purple, to pink, to red, to white – often with dark centres which can be in a different colour.

Often, these flowering plants are grown as temporary annual houseplants indoors or under cover.

Types of Cineraria to Grow

When it comes to Cineraria, which type you will choose to grow will largely depend on where you plan to grow them.

Indoors, you will usually be looking at Pericallis ssp.

In your garden, these may still be an option. But less tender Senecio will perhaps be easier to grow outdoors.

If you are looking for a silver ragwort to grow, try ‘Silver Dust’ which has received an RHS Award of Garden Merit.

If you are looking at Florist’s cineraria, then the Senetti Series offers many of the most common choices. Some interesting named varieties are:

Where to Grow Cineraria

Senecio cineraria will grow well in any well-drained soil in sunny position, in pots or in the ground.

It works well for beds, planters or containers which face south or west, and can cope with drought and windy conditions, as well as a more sheltered spot.

Pericallis x hybrida cineraria does best in full sun or partial shade. Its tolerance to shade is one of the reasons which is why it can work well as a houseplant for the summer as well as being grown outdoors as a pot plant or summer bedding plant.

It can thrive in any fertile, well-drained soil. If you plan to overwinter your plants, they must be kept in a dry, cool, frost-free spot.

Senecio cineraria/ Jacobaea maritima seeds should be sown in spring, between March and May at 19-24°C for optimal germination rates.

You can also take semi-ripe cuttings of these plants in the mid-late summer, or purchase plants from your local garden centre or plant nursery if you prefer.

Plant out in beds or containers in May or June.

In milder areas, it may overwinter outside as mentioned. But you may prefer to grow it as an annual, or grow it in containers which can be moved indoors in autumn when frost threatens.

Pericallis x hybrida cineraria seeds are sometimes sown in December, but when grown indoors, the seeds can be sown any time throughout the year.

The seeds are very small and are pressed into the surface of the potting mix or growing medium. They are best sown in a propagator, and provided with temperatures of 18-20°C.

Shoots appear around two weeks after sowing, and seedlings are then potted up and should be kept at around 15°C. for best results. These plants can also be propagated by means of semi-ripe cuttings in mid-late summer.

You can also, of course, take the easy option and purchase bedding plants. Whether you sow or propagate your own plants, or buy your Cineraria, again, you should plant them out in May or June.

Treat them as annuals or overwinter them as above in a dry and frost-free place as mentioned above.

However, it is worth noting that these Cineraria rarely bloom more than once, and so they do not make great perennials in most UK gardens and are best treated as annuals.

Care and Growing Tips For Cineraria

Senecio cineraria or Jacobaea maritima is a fairly easy plant to grow in containers or in your garden and it is an ornamental plant that we’d definitely recommend.

In order to encourage the plants to put on plenty of new foliage growth, it is generally best to cut back any long shoots to suppress flowering – since the foliage is the main decorative feature you are after.

Florist’s cineraria are beautiful flowering plants, no doubt. But they are short-lived and will take a lot more work.

If bought as bedding plants, it is worth noting that this can be an expensive option, and not the most sustainable choice.

If you do purchase bedding plants for your garden, remember that the most eco-friendly choice involves trying to buy plants that come in peat-free compost, and which do not come in plastic pots.

These flowers can be finicky – requiring just the right light levels, amount of water, humidity etc. and only providing blooms in summer (or other seasons when grown indoors) for a relatively short length of time.

Cineraria can also be plagued by a range of pests and problems. Cineraria are beloved by aphids, thrips and whiteflies. Spider mites are also a common issue. Fungal issues such as mildews, root rot and common rust can also commonly occur.

In your garden, be sure to maintain a balance in the garden ecosystem with as much biodiversity as possible.

Use companion plants and attract beneficial predators to help you keep pest numbers down. Indoors, organic sprays can be used as a last resort to tackle extreme pest problems.

Neem oil, or biological controls can be considered, for example.

For home growers, there are better choices perhaps, than these fussy flowers. But many still love to grow them for their beautiful blooms.