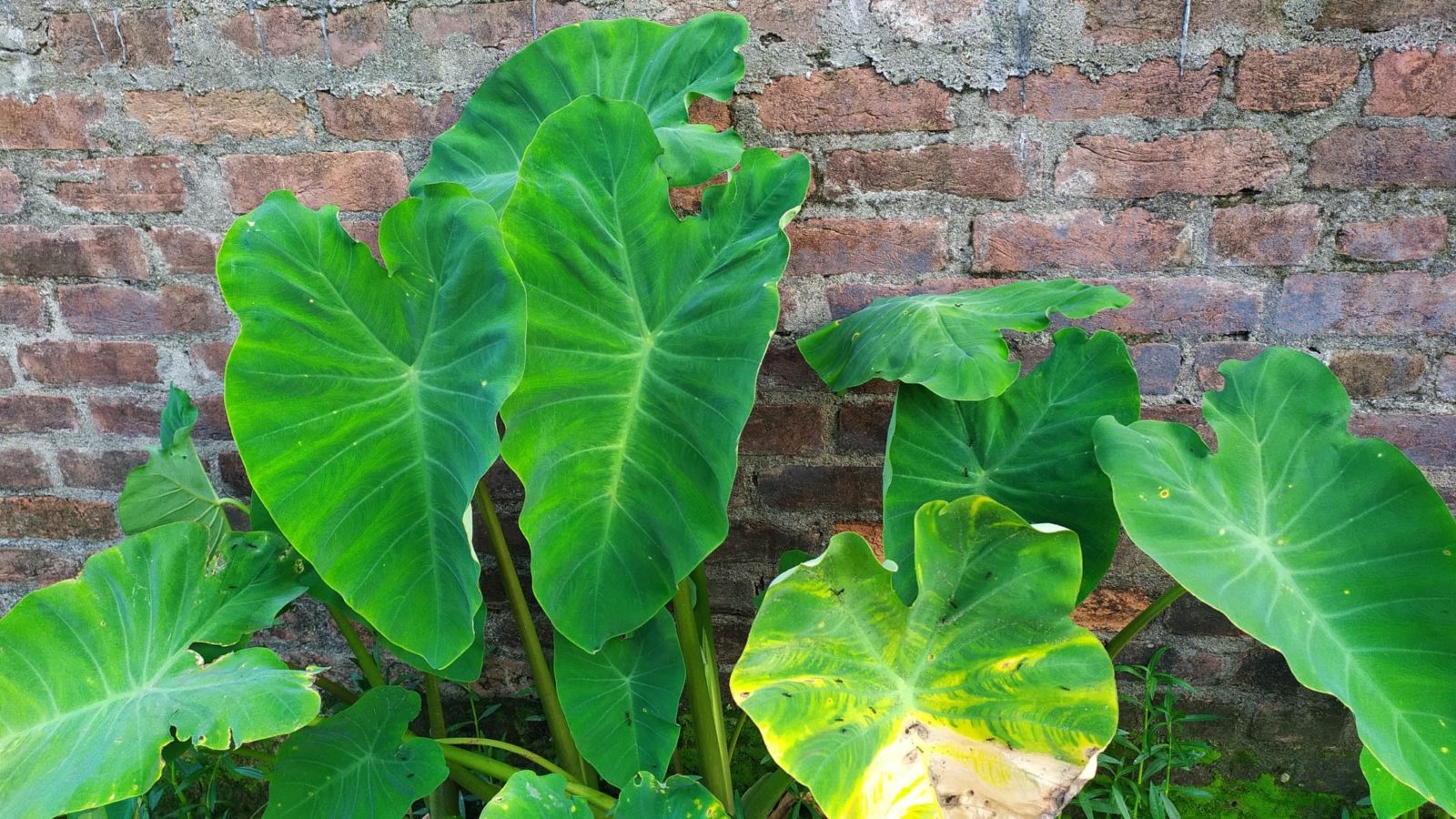 For big impact and impressive and exotic foliage, colocasia – or ‘elephant ears’ as they are better known, will certainly make a statement in the garden.

With large and jungle-like foliage being all the rage at the moment, these plants are right on trend and look magnificent when grown here in the UK.

A big impact plant, they can grow to nearly 2M tall and wide and will draw attention wherever they are grown.

Producing large arrow or heart-shaped leaves, often with prominent veins running through them, they look so spectacular you just want to touch them!

However, in this country, they tend to be grown for ornamental purposes, rather than culinary.

Hailing from tropical Asia, it is not surprising that they prefer a moist and warm environment and can even be grown on flooded land, but can also grow well under certain conditions, here in the UK.

Often used as a statement plant, they look equally spectacular when grown in a border or container and can suit a variety of planting schemes and styles.

There are many different colocasia varieties that will grow here in the UK.

With foliage ranging from bright green to deep purple, and even speckled leaves, some will produce white or yellow flowers when mature.

However, they tend not to be grown for their flowers, but for their stunning foliage.

Some of the best varieties to grow includes:

Colocasia esculenta ‘Black Magic’ – possibly one of the most stunning plants to try. Growing up to H2M x W1.5M it needs some space, but is spectacular if given so. Producing huge leaves up to 60cm in length with dark coloured stems, the leaves start off green and turn a deep purple-black over time.

Colocasia esculenta ‘Blue Hawaii’ – another magnificent variety to grow. With its bright green leaves and contrasting dark veins and stems, one cannot fail to be impressed. Growing to a slightly smaller size of H1.5M x W1.5M, it is part of the Royal Hawaiian series, introduced to the UK from the US.

Colocasia esculenta ‘Illustris’ – grown for its enormous heart-shaped, two-tone coloured leaves with prominent bright green veins and stems. Growing to H1.5M x W1.5M, it is a good variety for growing in a large pot or container.

Originating from warmer climates, colocasia has some rather specific growing requirements. But this does not mean that they’re out of reach for gardeners here in the UK:

They can either be planted out after the last risk of any frost, usually late around May to June, given a head start by potting up in spring indoors, or grown year-round as a house plant.

Colocasias can sometimes be bought as semi-mature plants, but are more often than not bought as tubers.

To grow outdoors, colocasia tubers can be planted directly into the ground as summer begins.

They are best planted shallow, in a warm and sheltered spot, with the growing tip of the tuber just protruding above the soil surface.

Water and mark with a label or stake, so not to step on them by accident. As hungry plants, it is worth adding some well-rotted manure or garden compost to the planting hole to give the soil a boost.

Water well on planting and continue to do so throughout the summer.

To plant indoors, either long term or for a head start before planting out, fill a large container 25-30cm wide with a peat-free multi-purpose compost and plant the tuber as above. Water well and keep either on a sunny windowsill or in a warm greenhouse.

If planting out or growing on a patio or terrace, wait until all risk of frost has passed and the plant is of a decent size not to be in danger from slugs and snails.

Keep the soil moist and apply a balanced liquid feed on a monthly basis. Colocasias like to be warm and sheltered, so a sunny or part shaded south or west-facing spot, out of the prevailing wind is ideal.

Colocasia are not hardy plants and need to be kept in a warm environment around 21C over winter to avoid them going dormant and losing their leaves.

It is recommended to bring them indoors in their pots and reduce watering, before the autumnal temperatures drop, to overwinter.

If grown outside, the plant foliage can be cut back hard and the tuber lifted to store over winter, in a dry and cool shed or greenhouse, until ready to plant the following year.

Some varieties may flower after their second or third season.

Some gardeners believe that the flowers detract from their magnificent foliage and so cut the flowers off when they appear to encourage the plant to put its energy back into producing new foliage.

The young soft leaves of colocasias can be, unsurprisingly, rather tempting to slugs and snails.

To give new plants the best chance, it is best to keep them when young in a slug free environment where possible and only plant or move them outside when they are of a fairly substantial size.

Slug and snail controls can include, picking off by hand, especially at night with a torch when they come out, using barriers such as copper tape or wool pellets and using traps.

Encouraging predators including birds and frogs can be surprisingly effective as well.

Glasshouse whitefly can be a particular problem when growing colocasia in a greenhouse, conservatory or as house plants.

The sap-sucking bugs are 2mm long and thus visible to the naked eye and often leave behind a sticky honeydew substance.

They are often not a problem on outdoor plants as the bugs prefer warm conditions. It is wise to check plants for whitefly from spring onwards, as a small number are far easier to control than a large infestation.

Controls can include increasing ventilation where possible and quarantining new plants for a few weeks to check for signs of whitefly, before introducing them to a greenhouse or other houseplants.

For severe infestations, sprays including natural pyrethrum, plant oils and fatty acids can be used, or even contact insecticides such as lambda-cyhalothrin or deltamethrin. However, with a short action time, they may have to be used repeatedly as per their instructions.

Even though unlikely to be an issue with colocasia plants, sprays should not be used when the plants are in flower due to the danger to pollinators.