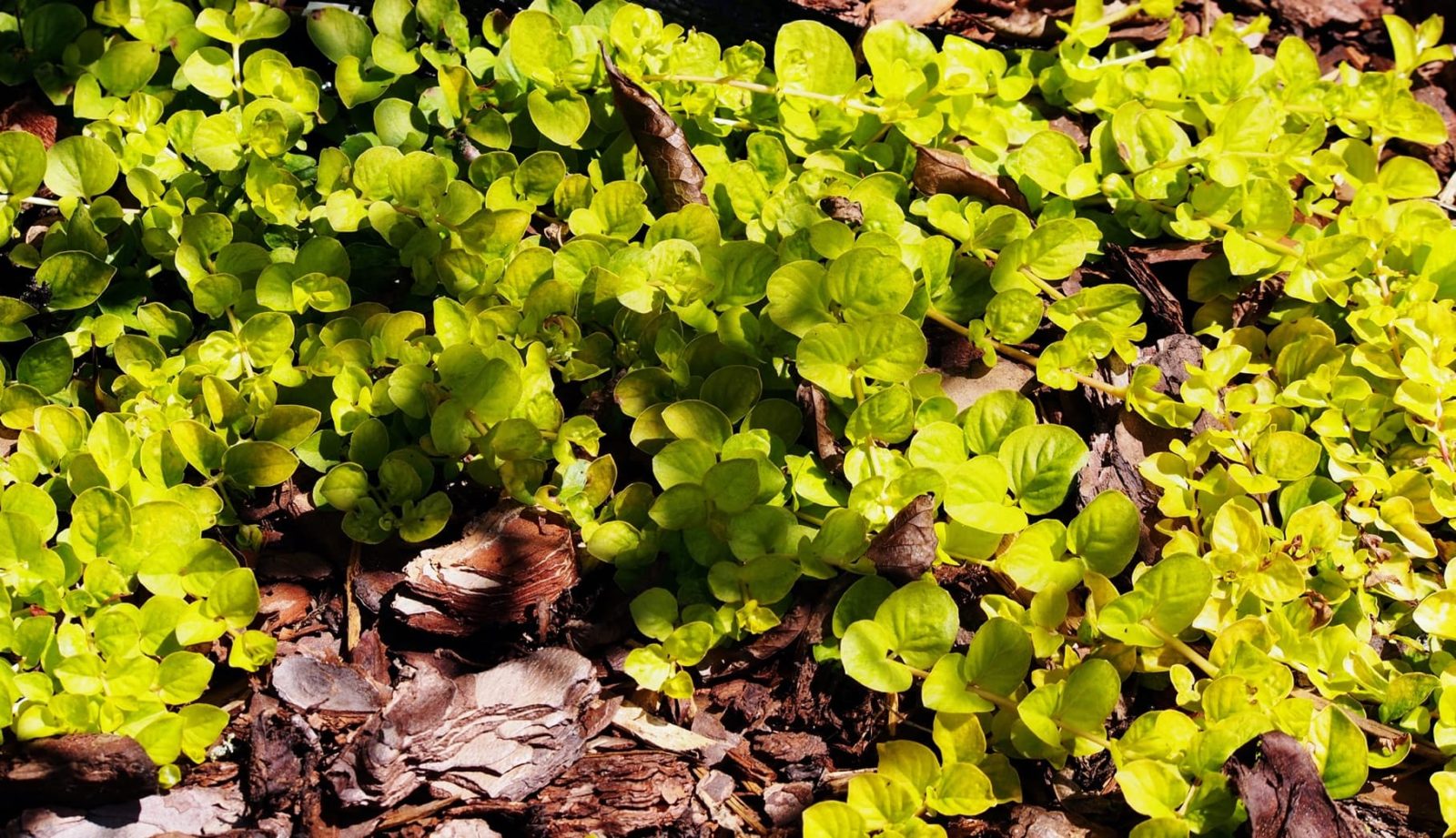 Height
Up to 10cm

Here’s a plant with a quirky name, a visually captivating appearance, and a somewhat controversial reputation. If you’re planning to incorporate this billowing yellow-green plant into your garden, you need to have an understanding of all three.

Note that while Creeping Jenny and Moneywort aren’t technically the same plant, the general guidelines for growing both plants are roughly the same. So in this guide we’ll treat them as one and the same for practicality.

What is creeping Jenny (moneywort)?

Creeping Jenny, AKA ‘Moneywort’. There’s a lot going on with that name, isn’t there? So, first things first, let’s unpack it and see what we’re working with.

The creeping part is fairly self-explanatory: Left to its own devices, the boundaries of this plant will creep ever-outward, as its tendrils seek out fertile new ground to grow in. This creeping tendency can become problematic, but we’ll talk about that later.

Less is known about the origins of ‘Jenny’. This seems to be another example of a traditional name that took hold and managed to outlast the story that gave rise to it.

Moneywort, although seemingly cryptic at first, simply harks back to the Latin name: Lysimachia nummularia. The second half of the name, ‘nummularia’, translates to ‘like a coin’, and refers to the coin-shaped leaves on a mature plant. Many traditional names riffed on this monetary theme (twopence, for example), but moneywort is the one that stuck best.

Whatever you want to call it, this plant is an evergreen perennial well-known for its tendency to spread. Stems grow and place new roots, allowing the plant to expand effectively indefinitely.

The answer to this question is the same for most plants, when you break it down: Because it looks nice, and because it may visually complement other plants and themes in your garden. It’s fairly easy to grow, too, although requires a higher degree of vigilance than some other plants, especially if you’re planting in the ground.

How to grow creeping Jenny (moneywort)

You have two options: Grow from seed, or transplant an established plant into your garden. With the former, start growing in a container indoors. This will keep the seedling safe from the elements and give it the best shot at taking hold. Plant the seed just below the surface of the soil, then water gently. After a couple of weeks you should see growth, then in early spring you can transplant your seedling outdoors.

If you’re transplanting an established plant bought elsewhere, simply choose the right spot in your garden.

How to plant it

If you’re growing in the ground, dig a hole in your soil approximately the same depth as the pot you’re moving the plant from. Remove the plant and place gently in the hole, then cover over and pat down gently. Ensure the root system is fully covered. Grow about 60cm apart from other plants to factor in the enthusiastic growth of a creeping Jenny.

If you’re growing in a container, repeat the steps above, and ensure the container is deep enough to accommodate a root system. Growing creeping Jenny in containers is a popular choice because, when established, the plant will spill pleasingly over the container edges, creating a fantastic draping effect.

This plant likes full sun or partial shade, and will do best in any aspect except for north-facing. It can handle exposure to the elements, but will also do well with shelter. Creeping Jenny has a hardiness rating of H6, meaning it will tolerate even the harshest of UK winter conditions – down to -20 degrees Celsius, at least.

Choose a soil with clay or loam, and ensure it’s able to drain well.

As we’ve said, if you’re growing creeping Jenny outdoors, not in a container, leave plenty of space for the plant to grow, and remain especially vigilant that new growth doesn’t spill beyond the intended area. If this happens, the plant can quickly become a pest, wreaking havoc on other nearby growth.

If you’re feeling particularly adventurous, you could grow your creeping Jenny outdoors in an elevated display. This gives the best of both worlds: Your plant is able to enjoy the optimal outdoor conditions, while being far less prone to invade surrounding flowerbeds and gardens. The draping leaves would have to make a journey all the way to the ground before being able to spread, giving you plenty of time to catch them in the act and intervene.

How to grow creeping Jenny indoors

In containers, creeping Jenny makes a fine houseplant. We’ve mentioned the billowing nature of Jenny’s leaves: This makes a great visual contribution to your indoor plants, especially if you don’t currently have an ivy or other flowing plant.

For the best results, keep your creeping Jenny container on a high surface – perhaps a shelf or on top of a cabinet – to give the flowing leaves enough space to flourish. If you grow on a coffee table or similar low-level surface, the tendrils will quickly bunch up on the floor, which isn’t ideal.

Growing indoors, try to find a window that faces west or south, to ensure the plant gets enough sunlight while not remaining in direct sunlight for extended periods.

Creeping Jenny doesn’t need a lot of fertiliser. A sprinkling of 10-10-10 each spring contains enough nutrition to keep the plant growing abundantly for the next season.

As a natural inhabitant of wet and boggy areas, creeping Jenny can handle more moisture than some other plants. Water often, and try to keep the soil consistently moist (read: not soggy). Try to avoid letting the soil get completely dry.

You’ve probably figured by now that, left unchecked, creeping Jenny can cause problems. This is because the roots like to roam (or, you could say, creep), and they set down roots when they do so. Each new root is effectively a control centre for a new section of plant, and it’s the reason creeping Jennys are able to cover so much ground.

If your moneywort is growing on the ground, you’ll want to prune back particularly enthusiastic growth fairly often. Doing so simply requires cutting off sections growing beyond the intended area, and ensuring you pull up the entire root system of each new section.

Pruning also helps your creeping Jenny to remain fresh and healthy, as the plant is able to allocate more of its resources to the growing sections, rather than to fuelling new growth.

This plant lends itself well to propagation, with one gardening website observing that it’s actually harder not to propagate it! When you’re cutting off newly-rooted sections, you have the option to regrow any or all of these as new plants. Whether in the ground elsewhere in the garden, in a container to mix things up visually, or via a friend: You’ll quickly get a generous reputation if you give away each of your cuttings to people looking to expand their garden arsenal!

Aside from its potentially troublesome overabundance, creeping Jenny isn’t prone to any pests or diseases, making it a popular choice for gardeners who aren’t looking for too much of a challenge. There are a couple of things to look for, and although they’re unlikely, we’ve included them here for reference.

Theoretically, any plant is susceptible to root rot. This damage occurs when the root system of a plant remains waterlogged for too long, and the solution is simple: Don’t water your plant more than it needs. As we said earlier, with creeping Jenny, this simply means allowing the root system to drain, only watering when required, and taking care to never let the soil dry out fully.

Again, most plants are susceptible to fungal diseases in theory. These various afflictions all come from fungal spores settling on your plant and propagating, causing damage to leaves, stems, roots, or all three, depending on the type.

Luckily, the solution to fungal diseases is the same as root rot: Don’t overwater. Fungus likes damp conditions and will thrive on plants whose roots or surface-level organic matter doesn’t get the chance to dry out or dry off properly. To protect your plant, take care when watering to only water the soil, and avoid getting leaves and stems wet.

Show me the moneywort

If you’re looking for a captivating, mat-forming plant for your garden, or for something to flow dreamily out of pots and provide vertical visual interest, then creeping Jenny is the way forward. While it requires a keen eye to prevent ground-growing plants from spiralling out of control, the actual act of keeping a moneywort in check isn’t prohibitively difficult. Just keep a careful eye on it, and trim back any sections that are getting a little too intrepid.

In exchange, you’ll be rewarded with a vibrant and vivacious plant that pairs excellently with all manner of shapes and sizes of plant. Creeping Jenny makes a fine addition to any garden, yours included. We wish you the best of luck in growing yours.