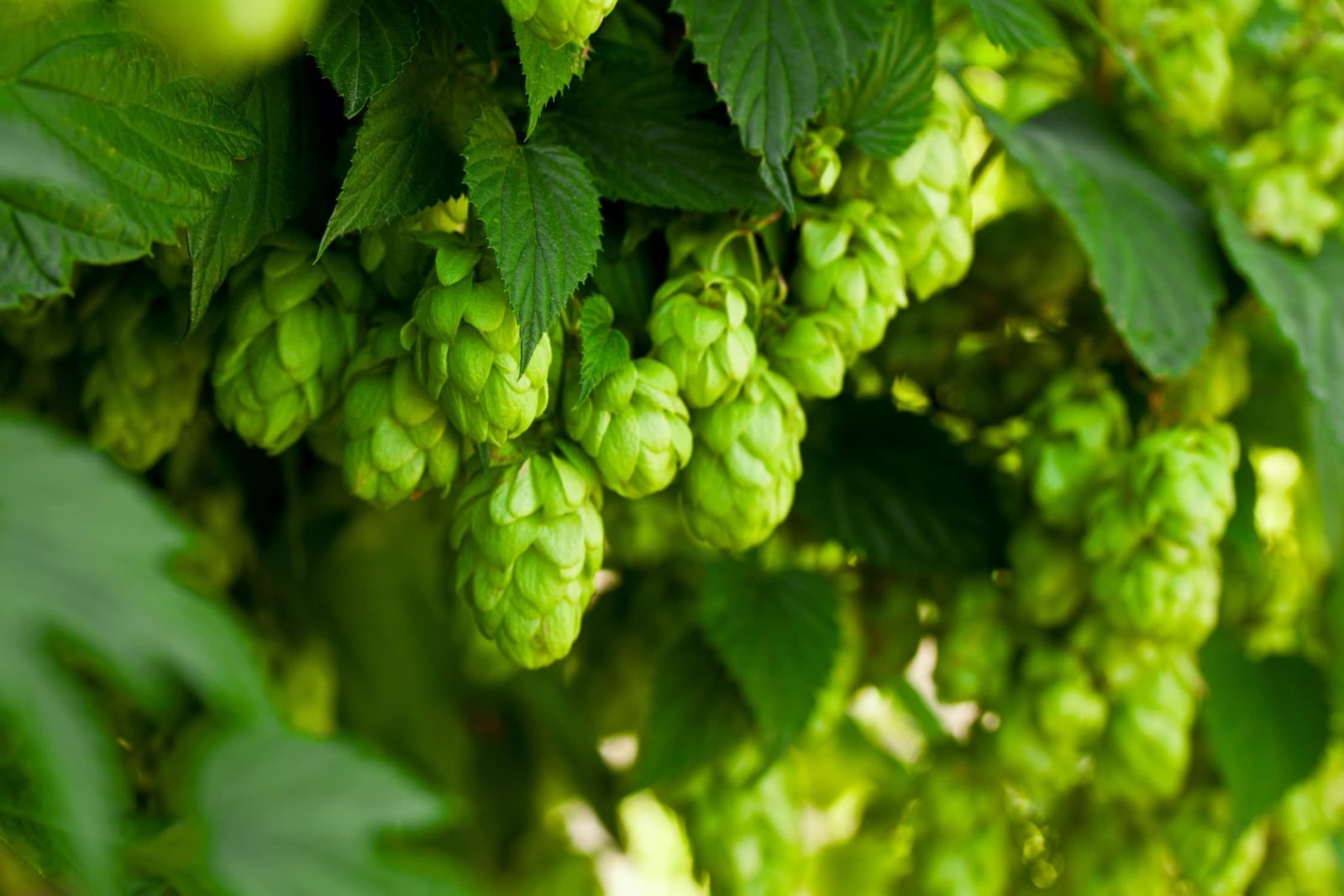 Homebrewing is enjoying a surge in popularity right now, but why not take the practice one step further by growing your own hops?

There’s nothing quite like a chilled glass of beer on a warm summer’s day or an aromatic ale by the fireside on a cold winter’s night.

Given that enjoying the fruits of your own labour is supremely satisfying – especially when those fruits are of the cold and frothy variety – home brewing has become all the rage across the UK and beyond.

For the truly dedicated amateur brewer, the next step is growing their own produce to use in the process.

Hops are one of the key components in any beer and cultivating your own varieties can not only be a hugely rewarding endeavour in itself, but it can also help to unlock unique flavours and aromas that will set your beers apart from others.

While homebrewers and gardeners alike might have you believe that growing hops is a challenging task, this climbing plant shouldn’t pose too many problems in the right conditions and with the right level of care and attention, especially if you’re already a seasoned horticulturist.

For those interested in learning more about how to grow their own hops and produce a tasty beverage that’s unique to their home brewery, here’s a breakdown of the process.

When divided into five distinct stages (preparation, planting, cultivation, harvesting and storage), the practice of growing hops should become easier and more achievable for anyone with the required levels of focus and elbow grease.

The first step in growing hops is acquiring the rhizomes from which they’ll grow.

While it is possible to grow hops from seeds, only the female flowering plants are suitable for beer production, which is why most homebrewers prefer to buy rhizomes instead – since this bypasses the inconvenience of separating male from female plants.

Rhizomes are harvested in March and April, though depending on your geographical location and the variety you wish to plant, it may make sense to pre-order your rhizomes as early as January.

You should be aware that different varieties will generate different characteristics in your beer, so spend some time reading up on the attributes of the hops available to you and make your selection according to your own preferences.

Once you’ve acquired your rhizomes, you should remove them from their packaging, wrap them in a damp kitchen towel and store them in the fridge until you are ready to plant.

In the meantime, you can prepare the area by selecting a corner of the garden which receives plentiful sunshine – so ideally, a south-facing location.

Since hops are climbing plants, they’ll need something to support their growth. Most home growers prop a trellis or other support against the side of the house, then use twine to allow for different bines to scale it.

In the image above, many twines have been attached to standing supports, though this arrangement is perhaps more suitable for a commercial outfit.

Once you have selected an appropriate location for your hop plants, you should aerate the soil to ensure it offers good drainage.

While it is possible to use fertilisers to boost its nutrient content, it’s preferable to use good quality compost and plenty of organic matter to mulch it. This will ensure your rhizomes are happy and healthy.

You should look to plant your rhizomes in spring, after the winter has passed and there is no danger of another hard frost – since this could kill your plants before they have even taken root.

On the other hand, avoid planting any later than May, as this could have an adverse effect on the quality of the hops you grow.

Locate each rhizome at a distance of around three feet from its neighbour to allow it to grow independently and prevent the varieties (and their individual flavours) from becoming mixed together.

Dig a hole between six and 12 inches deep and place the rhizome inside, then cover it with compost and mulch.

When positioning the rhizome in its hole, try and orient it horizontally so that the buds will emerge vertically. However, if you’re unsure of what this means or can’t figure out where the buds are likely to sprout, don’t worry about it too much.

Rhizomes will grow however they’re placed as long as they have access to the right conditions and receive sufficient TLC.

The first shoots which emerge after planting are known as “bull shoots”.

If you wish to encourage additional growth in your hop plants, you can trim these back immediately to enhance production.

Having said that, it’s not a necessary step in the process and you’ll still enjoy great hops by omitting it, so don’t worry if you’re forgetful or lazy.

By summer, you should begin to see a significant amount of growth from your rhizomes.

Once the plant reaches over a foot in height, you should begin training the bines to climb the trellis. You can do this by wrapping the bines carefully around your twine or trellis in a clockwise (never anticlockwise) direction.

You may need to continue training them for a few days consecutively until they grasp what they’re supposed to do – but from this point on, they’ll climb independently and at an impressive rate.

Hops are thirsty little plants and require frequent watering. In the UK, it might not be necessary to supplement the rainfall that most parts of the country regularly receive, though it certainly can be during the height of summer.

Check the soil surrounding your hop plants regularly and if it’s dry to the touch, give it a good drink. You want to aim for a moist but not sodden consistency at all times.

After a couple of months of growth, it’s advisable to trim the leaves off the bottom three feet of the plant.

This will prevent any bacteria or fungi in the soil from attacking your plant and inhibiting its growth. Other than that, hops should perform well enough when left to their own devices.

As a general rule of thumb, most hop plants are ready for harvesting in early autumn.

However, the date at which you planted them, the cultivars you’ve opted for and the conditions that your garden experiences will all affect their due date, so it’s important to manually check whether your hops are ready to be harvested or need more time.

You can do this by examining, smelling and touching them.

Ripe hop cones will be a lighter green than the lusher hues they displayed earlier in the year, while they’ll give off a distinctly aromatic fragrance (as opposed to a grassy one).

Rubbing a cone gently between your fingers should leave a yellowish residue of lupulin on your hand, while squashing a single specimen will give you the definitive test of whether it’s ready – ripe ones will be filled with the golden powder.

It’s advisable to check each cone individually and harvest them as and when they reach maturity, since different cones from the same bine can ripen at different times.

If you’re confident that the entirety of a bine has reached maturity, you can snip it (and the twine it’s attached to) at the base and lay it out vertically to make harvesting the cones easier.

After removing the cones (and bines, if applicable), you should leave your plant intact until the first frost of winter attacks it.

At this point, cut back any remaining bines to their base and mulch over the surface to provide plenty of nutrients to see the rhizomes through the winter.

You can also cover the plant with tarpaulin to protect it from the worst ravages of the season. By next spring, it should be ready to go again.

After harvesting the cones of the hop plant, most beer lovers prefer to dry them out prior to use.

This can be done quickly by placing them in a food dehydrator, but a more cost-effective option is simply to lay them out in a single layer on a sheet and blow air from a fan over them for a few hours. Then it’s simply a case of turning them over and drying the other side too.

Once the hops are completely free from moisture and have taken on the delicious golden shade pictured above, you should place them in a zip-lock bag and refrigerate them until you are ready to begin brewing.

If that isn’t scheduled to happen for some time, you can freeze them for a year or more and they will still retain their freshness.

While dried hops are the preferred ingredient of choice for many homebrewers, it’s not essential to dehydrate them before use.

In fact, wet-hopped beers retain their own distinct flavours and are rarer to come by, so you might wish to try out this alternative technique to access new dimensions and add new attributes to the finished product.

As with most home cultivation projects, growing hops can be a time-consuming and energy-intensive process – especially at the planting, training and harvesting stages.

You should also not feel disheartened if you don’t get a great yield in the first year, since most hop plants don’t start fully producing until the second harvest.

In any case, enjoy yourself and experiment with different varieties to arrive at a beer that tickles your tastebuds in just the right way.