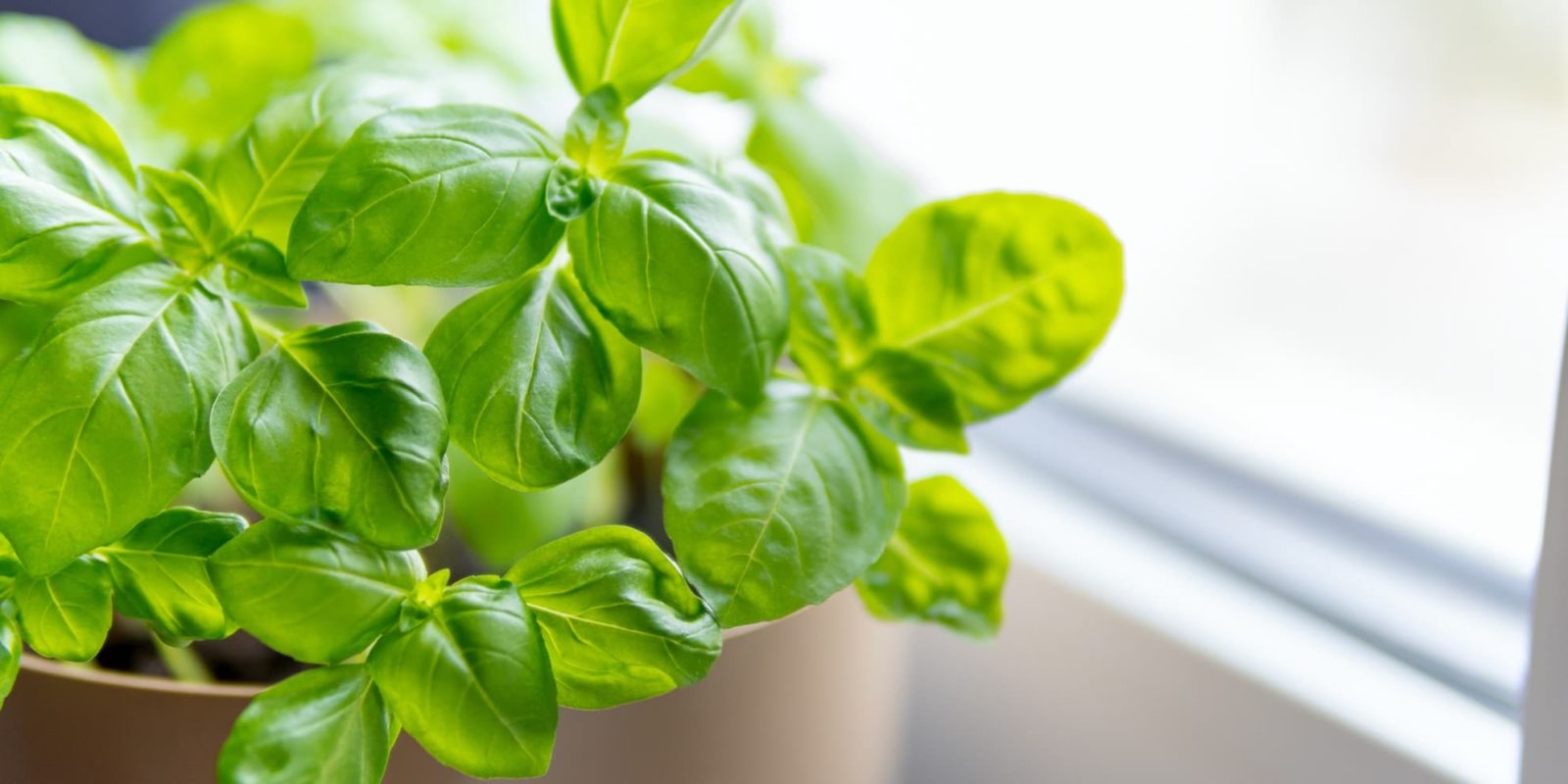 Spruce up your culinary dishes and your kitchen décor at the same time by growing a windowsill herb garden.

There are many advantages to cultivating your own indoor herb garden.

For starters, you’ll have access to a steady supply of fresh and delicious herbs, allowing you to embellish and accentuate the flavours of your home-cooked cuisine.

What’s more, you’ll be able to do so without having to traipse back and forth from the supermarket, fork out continually for the pleasure or rely on tired and dried varieties that go stale in your kitchen cupboard.

So without further ado, here’s a step-by-step guide on cultivating a thriving herb garden in your own home, without the need of any garden space whatsoever.

First thing’s first – you’ll need to select a windowsill that receives enough sun for the project to be a success.

Ideally, this will be situated in your kitchen to afford you easy access to the herbs when you need them, but don’t be afraid to relocate to another room of the house if the sunlight exposure is insufficient.

You’ll need a spot that receives at least six hours of sunshine a day for your plants to really flourish, otherwise they’ll end up spindly, flavourless and entirely underwhelming.

Now comes the fun part – choosing the herbs you wish to grow!

While most types of herbs will do just as well indoors as they will in an alfresco environment given the right care and attention, there are some who work better than others.

Here are a few suggestions:

A common ingredient in Mediterranean cuisine, basil is perfect for adding to pizzas, pastas, quiches and pies.

It’s an annual herb that’s incredibly fast-growing, so once it has become established, you should be able to pick at will for one season before replacing it with a new plant.

This perennial herb will keep coming back year after year – harvest it at your leisure during spring, summer and autumn, but don’t worry when it dies away in winter.

It’ll soon be back to add an oniony tinge to your salads and soups the following year.

Widely used in Mediterranean and Asian cuisines, coriander is another annual plant that will serve you well for one season before requiring replacement.

It’s also handy in that all parts of the plant can be consumed, though the leaves and the seeds are the most common ingredients in recipes.

As a plant which actually grows better in a pot than it does in ground soil, mint is the ideal herb to cultivate indoors.

It’s a perennial plant, so it’s a gift that will keep on giving a lovely refreshing twist to cocktails, infused teas or certain exotic meals as well.

This thirsty biennial will last you two years and require plenty of hydration over the course of its lifespan.

There are two varieties of parsley available: curly-leafed and flat-leafed.

The former is used mostly as a garnish, while the latter packs a stronger punch and is a common ingredient in Mediterranean cooking.

Another perennial, rosemary has woody stems and succulent leaves that are as versatile as they are vibrant.

Combine it with other herbs as part of a bouquet-garni in stews and soups, or else use it as a stand-alone sprig to add flavour to roasted vegetables and cuts of meat.

Its leaves even make a great addition to breads!

Sage is a hardy perennial which is resistant to drought and makes an excellent house guest.

Its intense flavour is intrinsically linked with the idea of Christmas in many people’s minds, but that same intensity means that a single plant will stand you in good stead all year round.

Thyme is another perennial which won’t require replanting in consecutive years – in fact, it’ll produce mounds of subtly scented foliage all year round!

For best results, however, it’s advisable not to pick it in winter when its growth slows.

See our post on the 15 best herbs to grow indoors for further growing inspiration!

Next, you’ll need to assemble all the equipment necessary to create the garden.

Thankfully, this shouldn’t entail too much effort or financial outlay on your part; all you need are the following items:

With everything now in place, it’s time to get planting!

If you’re sowing your herbs from seed, you should fill your pots to around two-thirds of their capacity with the potting mix, then sprinkle the seeds on its surface.

In order to distribute them as evenly as possible, it’s a good idea to empty out part of the packet into the palm of your hand, then pinch a few individual seeds between your fingers and place them accordingly.

Then, simply cover over with a layer of soil and water abundantly.

On the other hand, those who are seeking to transplant a store-bought herb plant to their windowsill should pour a small amount of potting mix into the pot to begin with.

Then, making sure to be extra careful not to damage the plant, ease it out of its container and gently massage the roots to separate them from the clumped form they will likely have assumed.

Place the herb into the new pot with the roots splayed out and fill in any gaps with potting mix, before watering thoroughly.

As mentioned above, herbs are fast-growing little plants that don’t require too much in the way of maintenance, so you should expect to see results without too long a wait.

Of course, store-bought plants can be harvested almost immediately (once they have begun to show signs of rejuvenation), but even seeds will display their first green shoots within a week or so.

Wait at least a month before you begin harvesting though, to avoid stripping the plant of its vitality prematurely.

In terms of routine maintenance, herbs will only require watering once they have dried out.

In general, the conditions inside your home are not likely to be as intense as those they would face outdoors, so as long as you prevent the soil from drying out altogether, you should be fine.

That means watering them every few days (or perhaps more if your home is particularly warm, especially during the winter months when the heating is likely to be on more often).

If in doubt, stick your fingers into the soil up to an inch or two and feel the moisture levels – if it’s completely dry, give your herbs a drink post haste.

When watering, it’s also a good idea to keep going until the excess seeps out from the drainage holes into the trays or saucers beneath.

This will help to prevent the accumulation of salt inside the soil (visible in the form of a white build-up on the top surface), which can inhibit the growth of your seedlings.

You may also wish to fertilise the herbs on a monthly basis, though this shouldn’t strictly be necessary to maintain their growth and those which are reared without artificial help will generally retain a stronger flavour.

When it comes time to harvest your herbs, you’ll often find that the more regularly you trim them back, the more heartily they’ll grow.

Having said that, you should never remove more than a third of their foliage at a time, since this will cause the plant undue stress and can stifle its growth or even kill it off completely.

With that in mind, harvesting them little but often is the ideal strategy for maintaining their growth while still ensuring you access a steady supply of the good stuff.

Where you pick your herbs from is just as important as how often or how intensively you do it, too.

For varieties that grow in clumps like parsley, chives and coriander, you should concentrate on the larger leaves at the edge of the plant first, only working your way inwards once those have been picked.

For other varieties that have several stems shooting off the main central column, like basil, mint and rosemary, trim a whole offshoot at once and strip it of leaves.

Harvesting your herbs in this way will avoid overwhelming the plant and ensure it keeps providing you with what you need all through the calendar.

7) Store for future use

If you find yourself in the enviable position of having more herbs than you know what to do with, it’s advisable to store them for use in the future.

This makes more sense than simply allowing them to wither on the vine, since they’ll not only go to waste, but also prevent the plant from continuing its growth to its full potential.

In this scenario, you should choose the greenest and freshest looking leaves of your herb and strip them off gently but firmly.

Then, simply place them in an ice cube tray and fill with water (or oil, if you plan to make dishes that wouldn’t benefit from excess hydration) and freeze them overnight.

Once the herby cubes have solidified, you can empty them out of the trays (thus freeing them up for other purposes) and store them inside Ziplock bags in the freezer.

These frozen herbs can be substituted for their fresh counterparts in the same quantities as any recipe calls for, allowing you to take advantage of great-tasting herbs all year round.