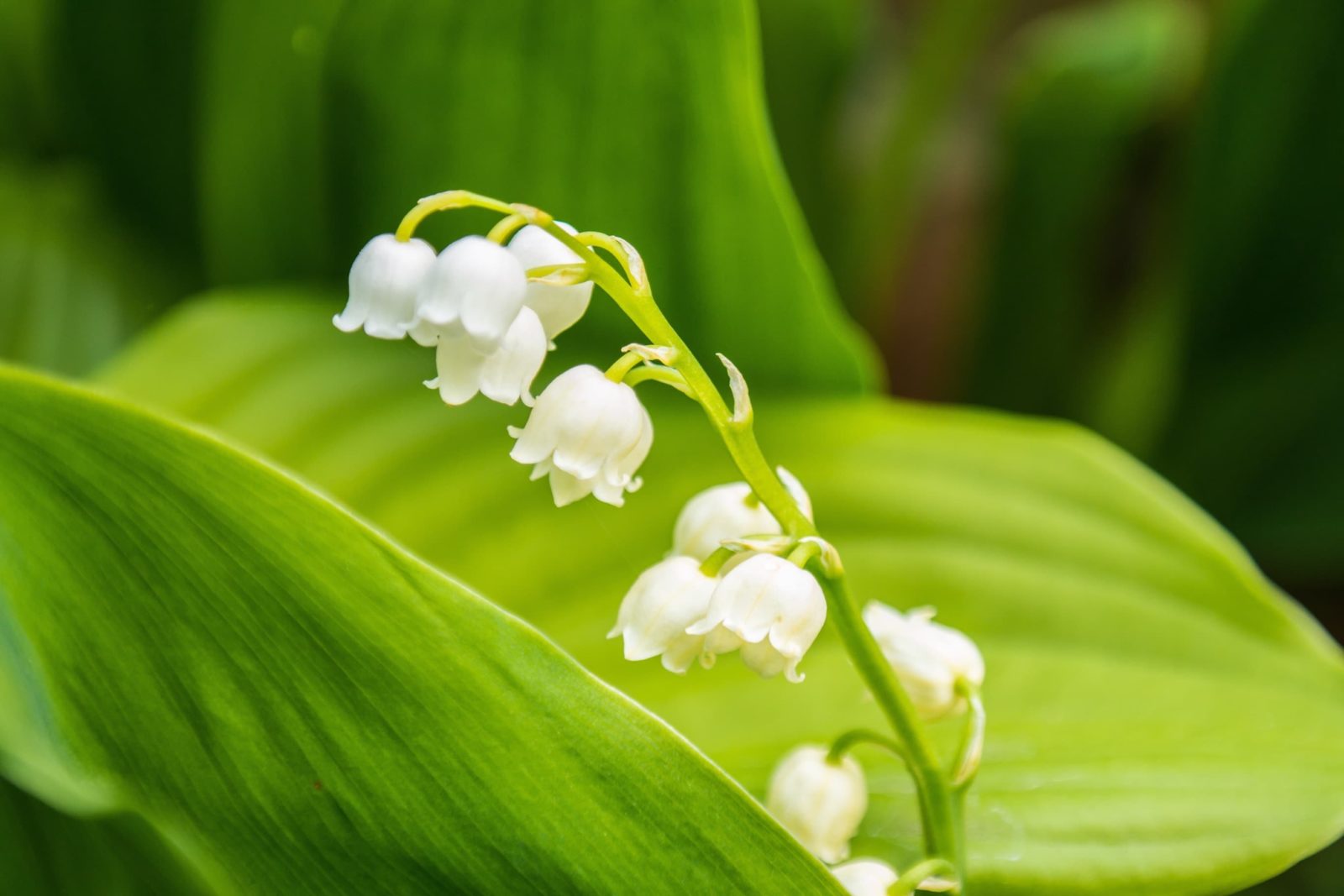 Providing it’s introduced in the right way, pretty Lily of the valley (Convallaria Majalis) can make an attractive and fragrant addition to your garden.

Sometimes called the ‘flower of fairies’, Lily of the valley is a woodland flowering plant, characterised by its bell-shaped, white pendant blooms of 5–10mm in diameter, which appear in springtime – as well as its bright green, lance-shaped leaves. It also bears fruit; orangey-red berries which grow to approximately 5mm in diameter.

Lily of the valley is a beautiful and sweet-smelling flower (the heady, floral scent is a popular choice for perfumes) and shouldn’t cause any problems if handled correctly.

Read on to find out more about this beautiful botanical, and for our best tips and advice on how to grow it successfully in your garden.

There are 3 varieties of Lily of the valley – majalis, keiskei and montana – originating from Eurasia, Japan and China, and the United States respectively (although the nativity of this last one is questionable). Despite the name, Lily of the valley is actually a member of the Asparagaceae family – otherwise known as asparagus. We know that the plant has existed since at least 1000 B.C.

Lily of the valley consists of two basal leaves with a flowering stalk in the middle, which produces hanging strands of up to 15 flowers each. The flowers are usually white but can also rarely be pink. Lily of the valley grows to a maximum of around 20cm tall.

In its natural habitat, Lily of the valley will flower in early spring for 3 – 4 weeks – although this may begin later during a particularly cold year or climate. The plant is perennial, meaning it lives more than two years, and in cooler climates, the leaves will stay year-round (in hot weather they tend to die off).

A single Lily of the valley plant will spread quickly, if allowed to do so, by forming underground networks of rhizomes. The individual pips then break the surface and grow into leafy shoots in spring, whilst remaining connected to the surrounding shoots underground – creating a colony of cloned plants. Cloned Lily of the valley plants are sterile and won’t grow berries – multiple unique plants are required to produce the seed-filled berries for pollination.

Other names you may know Lily of the valley as include Muguet, May bells, May lily, Mary’s tears and Our Lady’s tears – the latter two of which refer to a Christian legend that the flowers sprouted following the Virgin Mary’s tears at Jesus’s crucifixion. Another legend says that the plant came from Eve’s tears upon her exile from the Garden of Eden.

It also regularly makes its way into wedding bouquets, including royal ones, mostly because it’s said to bring luck in love. It was chosen by Kate Middleton for her marriage to Prince William, and also featured in the bouquets of Queen Victoria, Princess Astrid of Sweden and Grace Kelly.

Other claims to fame include that it’s the birth flower for the month of May, that it’s been the national flower of Finland since 1967, and that it’s the flower emblem of Yugoslavia. Le Fête du Muguet (Lily of the Valley Day) is also celebrated in France on 1st May every year, during which bunches of the blooms are sold in the streets.

Lily of the valley thrives best in areas with temperate climates and cool winters. Being a perennial plant, it’s hardy and adaptable, which makes it easy to care for, and given that the UK is one its native habitats, it’s well-suited to life outside in your garden.

To help it grow even more successfully, try to choose a shady spot to plant it, such as by a fence or under some trees, to replicate its natural environment. Ideally, it should get a few hours of natural light in the early morning, before spending the rest of the day in the shade. If you plant it in a place with too much sun, it probably won’t flower.

During summer, when the temperature gets too hot for it, your Lily of the valley will start to wilt and the leaves will go crispy. This is a normal part of your plant’s lifecycle – when this happens, prune the crispy leaves, leaving the healthy green ones.

Make sure your Lily of the valley has enough space to grow – as much as you want it to. As mentioned above, healthy Lily of the valley can spread very quickly, and you will need to set boundaries if you want to restrict its growing area. You can do this with garden edging, available from garden centres.

Lily of the valley’s preferred soil is slightly alkaline (according to the Royal Horticultural Society). This should be kept moist and have good drainage in place – i.e. not at the bottom of a slope.

You will probably need to water the soil well during sunny periods and summer. In terms of feeding, it doesn’t require much – aim to add a 2-inch layer of organic compost annually.

If you prefer, you can also grow Lily of the valley in a large container or shallow pot, filled with a good quality potting mix and organic fertilizer, and placed on feet to ensure sufficient drainage. Growing it in this way will allow you to easily control the spread of the plant, as well as the amount of water in the soil. You should still place the pot outside, to allow the plant to benefit from the cool air and seasonal changes of its natural habitat.

Lily of the valley resists most pests, but there are some species which are able (and very willing) to eat the plant, including slugs, leaf beetles and some moth and butterfly larvae. Keep an eye out for bugs such as these munching on your plant.

Lily of the valley can be vulnerable to fungus, due to its preference for moist environments. Look out for yellowing on the leaves, brown spots and discoloured veins. To try to prevent this, make sure that when you water the soil, you don’t get any additional water on the leaves, and keep a decent fungicide handy, just in case.

The real worry with Lily of the valley is southern blight, which is characterised by yellow balls at the bottom of the plant. If your plant contracts this infection, there’s not much you can do, and you should isolate and remove the plant to prevent it spreading to its neighbours.

Lily of the valley is native to the Northern Hemisphere, in particular, Europe and Asia. It favours a cooler, temperate climate, and environments such as forests and woodland, where the close-knit trees provide it with plenty of shade, whilst still allowing a little sunlight through.

This perennial plant will not thrive in year-round hot climates, or in areas with inadequate shade. It will, however, cope fine in the summer of a temperate climate, when its leaves naturally wilt and die off after the spring flowering period.

The soil preference of Lily of the valley is a moist, sandy soil with a slightly alkaline pH. It also likes a lot of space, with room to expand outwards whilst growing. This is a very fast-spreading plant; the underground network of rhizomes will keep expanding and shooting new pips until it meets with some kind of barrier.

For this reason, you often see large blankets of Lily of the valley covering forest floors and surrounding the bases of trees in woodland. However, as mentioned above, these plants will all be clones, and will not be able to procreate.

As they need moist soil with good drainage, the best position for Lily of the valley is halfway down a slope or hillside, where they will benefit from lots of water run-off, whilst not sitting in boggy ground or stagnant water.

Lily of the valley is usually available as pips (root stock) in the spring, after flowering. You can buy the pips from garden centres, nurseries or a limited number of online specialists, and it’s even possible to buy them on Amazon.

How To Grow Lily Of The Valley

To successfully grow Lily of the valley in your garden in the UK, you should follow the below steps:

Choose a shady spot in your garden, ideally under some trees, with good drainage. Mark out the area you want the plant to grow in and cordon it off with garden edging to prevent it spreading out of control. Prepare the soil with a layer of rich fertilizer. Plant the pips in late autumn, around November, ready for the winter dormancy period which will precede a spring flowering. Make sure to use gloves to prevent skin irritation, and keep the plants away from any children or pets.

As your Lily of the valley is growing in its natural habitat, it should require little additional care, and you can mostly leave it alone to do its thing. Just make sure to monitor the moisture levels in the soil and keep it well-watered in the event of a dry spell (avoiding the leaves to prevent fungus).