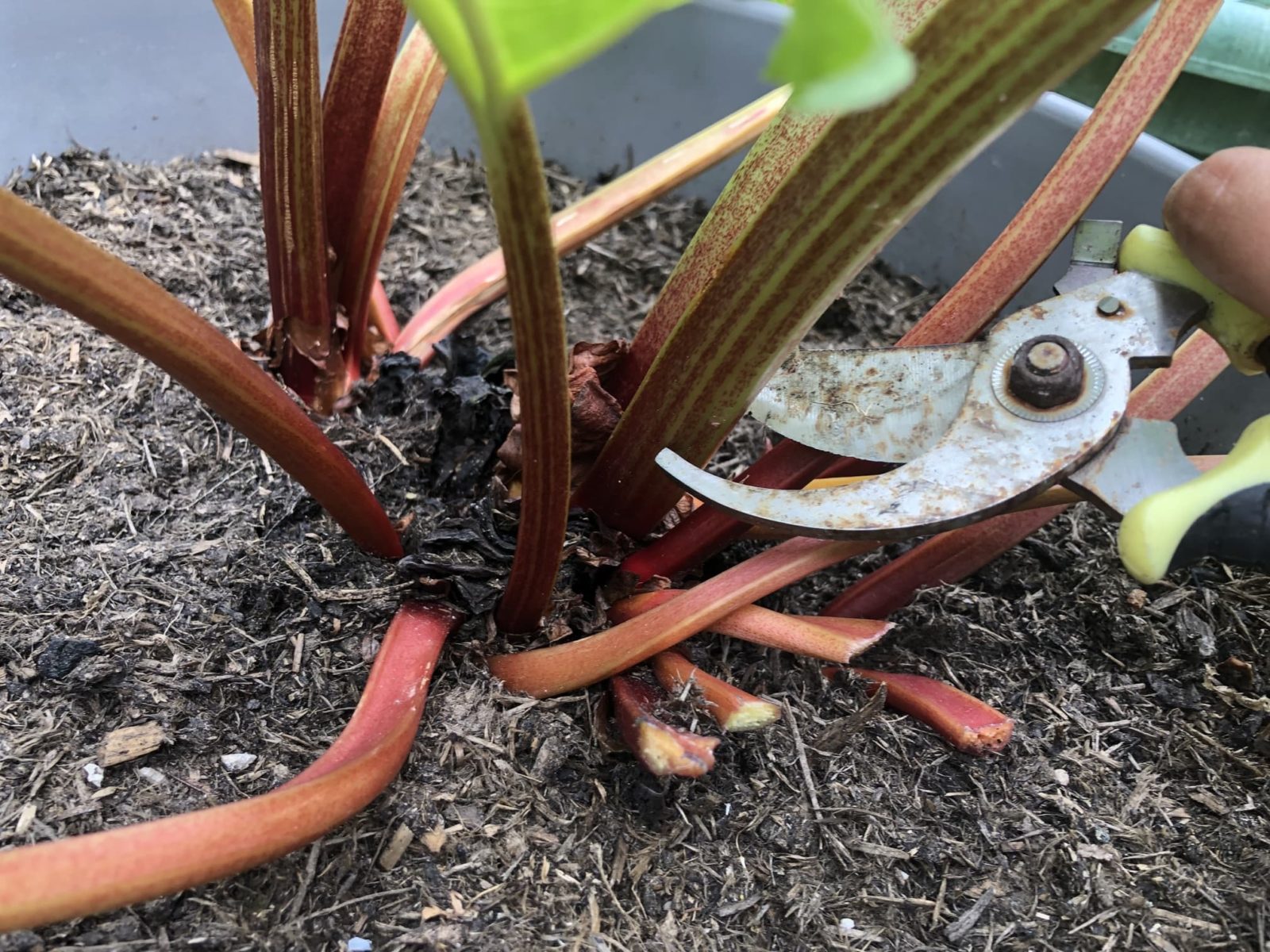 Rhubarb is a great perennial crop to grow in your garden – it will thrive in a sunny location, with moist yet well-drained soil.

These are generally low-maintenance plants and, when grown in the right spot, will require little attention and care.

The main job each year, once plants are established, will be harvesting your crop.

Here’s what you need to know about harvesting rhubarb:

Find more detail on this below.

When To Start Harvesting Rhubarb

If you have only just planted your rhubarb, you should hold off harvesting entirely for the first year.

This will allow the plants to establish well before they are weakened by harvesting.

In the second year after planting, you can harvest, but should be circumspect in doing so.

Harvest just a few stems this year, and allow the plants to fully mature before you get into a regular harvesting routine in subsequent years.

The specific time of year when you begin to harvest rhubarb will depend on whether or not you have decided to force your rhubarb plants.

When To Harvest Forced Rhubarb

This encourages earlier growth (typically approximately 3 weeks before rhubarb that was not forced) and generates tall pale stems.

Forcing rhubarb will bring forward your harvest and some argue that it will improve the flavour of the rhubarb stems.

However, it should be noted that forcing rhubarb does affect future growth of the plant to a degree – so this is only something you should consider doing with healthy and mature, fully-established specimens.

Also, it is not a good idea to force the same rhubarb plant for successive years, since this may reduce the plant’s vigour too dramatically.

If you have decided to force a rhubarb plant to harvest, you will usually do so in late winter, so that you can harvest in spring.

You can start the process as soon as November/ December, but it is usually done in January/February.

To force rhubarb, around this time, you will simply find something to cover over the growing plant to exclude sunlight.

You might use a special rhubarb forcing jar, a plant pot, an old bin, or another reclaimed container.

After you have excluded light from the growing stems for 8 weeks, you should be able to remove the cover and harvest.

You can harvest the pale long stems when they have grown 20 to 30cm tall, and harvest them earlier than those that have not been forced – perhaps even from as early as January, but typically from early in March.

The benefit of this is that the yield arrives during what was historically called the ‘hungry gap’.

This was the period when winter stores began to run low, and spring sown crops were not yet ready to harvest.

When To Start Harvesting Non-Forced Rhubarb

Rhubarb that has not been forced will typically be harvested around 3 weeks to a month later than that which has been forced.

Usually, rhubarb stems growing naturally in your garden will be ready to harvest from late March or early April.

How Long Can You Harvest Rhubarb For?

Typically, rhubarb is harvested only over the spring – until July at the latest.

The rhubarb will be perfectly edible and taste good still after this time, but you should generally stop harvesting in July in order to avoid weakening the plant.

Hold off harvesting once summer arrives and you can continue to enjoy harvesting from a healthy plant each spring over a number of years.

If cared for correctly, these plants can live for 20 years.

How Much Can You Harvest From One Rhubarb Plant?

Once a rhubarb plant is mature, typically from its third year after planting, you can harvest up to a third, or even half of the stems from each plant.

Just make sure that you leave some of the plant to continue on in active growth.

That way, it will continue to provide you with a bountiful yield for a number of years to come.

How To Harvest Rhubarb

When harvesting, simply take hold of each stalk at its base.

Try to gently ease it out of the ground. Aim to avoid cutting or snapping it off if possible.

Cut off the leaves (which are not edible) and place these into your composting system or use them as a mulch.

You can then take the stems and wash them to use them in your kitchen.

After harvesting from a mature plant, replenish the mulch of some homemade compost or other organic material around the rhubarb plant to give it the nutrients it requires.

Make sure you give it a chance to recover well before the following year’s harvest.