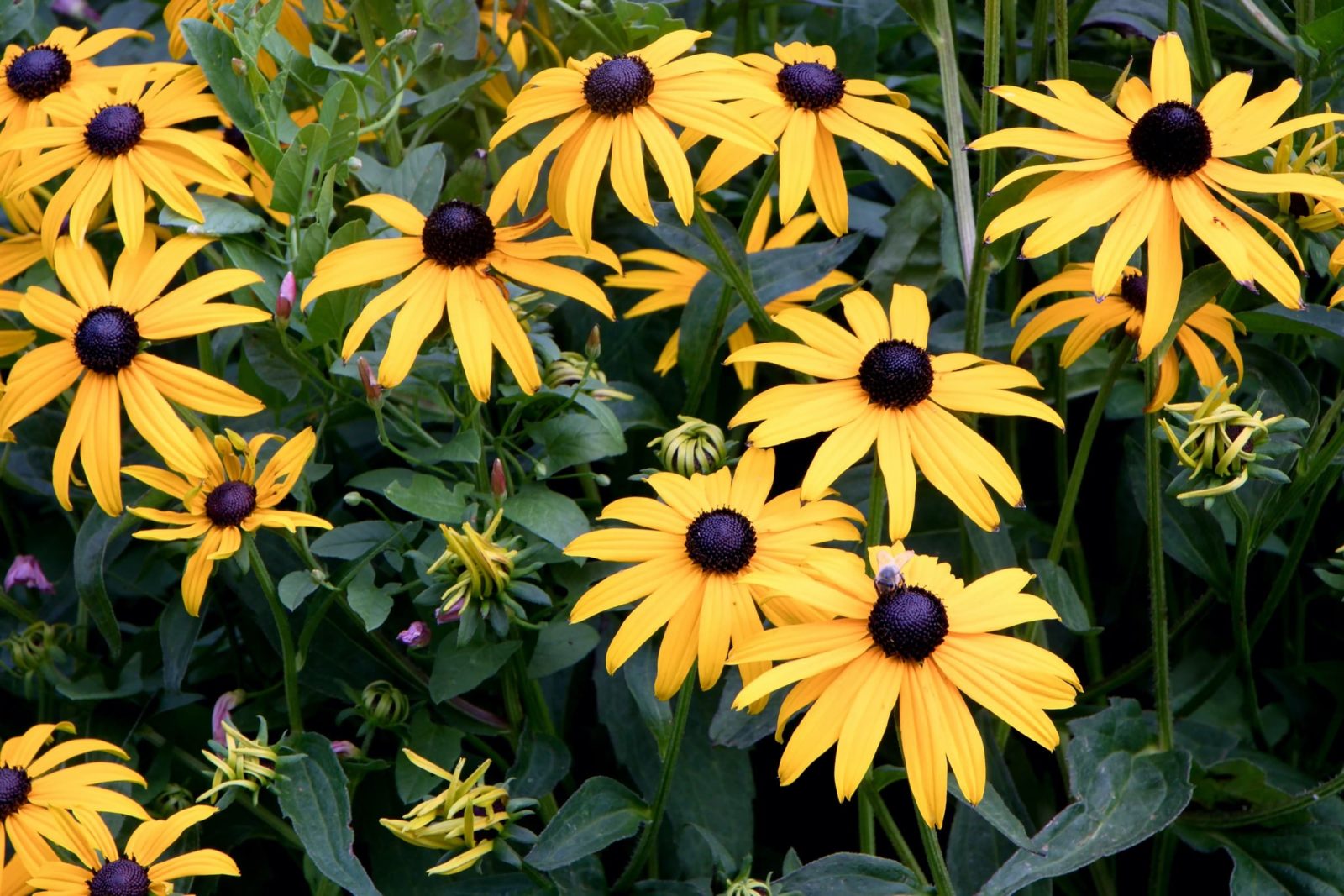 Rudbeckia, commonly known as ‘Black Eyed Susan’ is a plant you have probably seen before, although you may not known it by name.

Its familiarity is down to the fact that this lovely sunshine yellow bright flower is commonly found growing wild in fields and meadows throughout the UK and USA.

It is a native species of North America and, you possibly won’t be surprised to hear, a fully-paid up member of the sunflower family.

This pretty daisy-like bloom with its yellow petals and dark inner circle (hence the name) is actually a pretty powerful plant. So powerful, in fact, that it will tend to eventually over-rule most other flowers in its wake. Which is pretty ironic, considering Rudbeckia is listed as symbolising justice…

As well as humans who admire its colourful blanket-like spread when grown in the countryside, insects such as bees and butterflies also love Rudbeckia. Butterflies and bees use it for nectar. Other garden animals and birds also feed on the seed heads. And this is another reason why the plant is so prevalent – ie the birds and insects spread its seed as they fly back to their own homes with their prize.

Rudbeckia isn’t just grown wild, of course; you will also find it in gardens up and down the country where it is often used for creating colourful and attractive borders. In addition, its cheerfully bright blooms are also a favourite of many high street florists.

With both summer annual and perennial varieties, Rudbeckia (also referred to as a Coneflower), comes in a number of different varieties and beautiful jewel-like colours. You will certainly find blooms appearing in shades associated with an Indian Summer, such as gold, orange, rust and yellow. New hybrid versions are equally as colourful and arresting with their shades of emerald green and bright pink.

In essence, Rudbeckia is a very pretty flower which is colourful, easy to grow and low-maintenance. The plant self-propagates so even if you did nothing, chances are you would still have a spread of blooms in your garden. As a result, it is loved by the majority of gardeners, both amateurs and experienced types on both sides of the Atlantic.

New varieties of Rudbecki include the bright hybrids Indian Summer and Cherokee Sunset. The latter appears in lovely shades of bronze and orange, as well as yellow. The hybrids are stunning to look at, but unfortunately don’t last as long as the original versions, such as Black-Eyed Susan (and which you can expect to find all summer long).

Hybrids tend to fail after several years and require replanting. The plants do self-sow though, which can often result in sunny blooms in your garden for longer than you may have expected, especially if they’ve been spotted by birds and insects.  Irish Eyes is a variety of Rudbeckia with a striking green centre surrounded by bright yellow petals while Green Wizard has green petals with a black centre.

Toto is a dwarf version of the species, growing to a mere one foot tall, while Golden Glow is the giant, with some recorded plants growing to as much as seven feet tall. Unlike the majority of the short-lived hybrids, Golden Glow is hardy and will bloom. all summer long.

Although Rudbeckia is capable of withstanding drought conditions, the flowers will grow better if they are watered when necessary. In other words, it is really not a good idea to let them dry out – not, that is, if you want to see them flourishing and brightening up your borders. Dividing older plants doesn’t just ensure you have healthier blooms, but that there isn’t too much spreading via self-propagating means.

On the taller versions of the plant, the best method of pruning is to reduce the outer shoots by as much as 50 per cent, but only up to two inches on the inner shoots.

That’s because the shorter stems on the outside will always support the tall shoots in the centre of the plant.

When to Plant Rudbeckia

The time of year you plant Rudbeckia depends on what type your particular flower is ie whether an annual or perennial variety. The former should be sown indoors in April or May and set out in the garden after the last of the frost has disappeared. Perennials can be planted straight into soil in the garden in either the spring or autumn months.

Rudbeckia should always be planted in the sunniest spot in your garden. Or, if that’s not available then in a spot that has some shade, but also access to the sun at times.

The soil is important too; preferably moist but not susceptible to becoming waterlogged following periods of intense rain. Heavier soil can be used, provided you surround the plant’s roots will plenty of good compost.

Potted Rudbeckia can be planted from the middle of March right through to April and in the middle of September to October. The hole in the ground for the transplanted Rudbekia should be at least twice as wide as the rootball itself. Add in some feed (fish and bone) then dig this in. Remove the plant from the pot and put it into the newly-dug hole. Next, fill in with soil and water the plant to allow the nearby ground to ‘settle in.’

How to grow Rudbeckia in Containers

Make sure your container pot is at least 18 inches wide and 12 inches deep. It should also have plenty of decent-sized drainage holes at the bottom. This will ensure that the soil will remain moist but not waterlogged (as this would kill-off the plant). Any type of decent multipurpose compost is fine.

Feed after two weeks then every three to four weeks after this. Incidentally, one of the best varieties of Rudbeckia to grow in containers is Toto the dwarf version since it doesn’t need as much room as the others.

Start growing the seeds in a greenhouse or at least indoors, during the months of February, March and April. Expect to wait up to three weeks for them to germinate. Then, as they grow either thin them out to around 30 cm space in between, or put them into pots. Finally, move them into their final positions when the roots balls are strong and large enough to transfer.

If you’ve tried both methods of growing ie directly planting into the soil and transplanting, then you have probably noticed that directly sown seeds will often not flower until their second year, while transplanted rootballs will bloom within the first 12 months.

After around four years you may notice that your Rudbeckia flowers aren’t as plentiful as they’ve been in previous years. That’s because they will stop producing as many blooms as they age. The way to prevent this happening is to divide your Rudbeckia ie cut the one plant up into three individual plants. This doesn’t sound as complicated as you might think – although cutting through the root ball will certainly require some elbow grease (or even a hacksaw).

If you plan on going ahead and doing this then it’s best to wait until April or September. Ensure the soil is watered the day before you plan on removing the Rudbeckia then on the day trim foliage surrounding the root ball until you are left with around six inches of leaves and stalks.

When digging up the rootball attempt to keep as many of the roots intact as you can. Next, cut it into three equal parts. Replant the new parts in soil so that the rootballs are equally as deep as the original one rootball. Ensure there is a space of around 18 inches between each rootball and don’t provide any nutrients for the new plants until they start producing leaves.

Where to Buy Black Eyed Susans

Garden centres are the best places to buy these plants. You will usually find them in pots or containers ready to replant. Alternatively, buy them from seed and do the sowing yourself indoors before planting them outside in the garden or in containers.

Mildew on the leaves can sometimes be a problem for Rudbeckia. This can usually be avoided by being careful not to water too much. Good spacing between the plants also helps so that they don’t ‘smother’ each other. If you do spot a powder fungus on the leaves then combat it with antifungal treatment.

Leaf spot is another worry, although this is easily identified by characteristic dark spots on the leaves. It is usually caused by too much humidity or dampness, but can also be the result of a very cold spell. The result of Leaf Spot is that the affected leaf usually falls off; in the worst-case scenario it can cause the plant to die off as well.

‘Live’ pests that can cause damage to Rudbeckia include slugs and snails, as well as the notorious aphids.

What height does Rudbeckia grow to?

The plants can grow to more than three feet tall, with leaves six inches long. However, not all varieties of the species grow to this height. Some can grow to as much as seven feet tall while the dwarf versions grow to just one foot tall.

Should you cut back Rudbeckia?

The plants should be divided every two or three years. This should prevent them spreading too widely and taking over a particular patch in your garden. You could remove ‘tired’ flowers but a better idea may be to leave them for birds to feed on as autumn approaches (Finches, in particular, love them). Or even just leave half for the birds. Then again, with some Rudbeckia varieties, cutting back the dead flowers could result in further blooming towards the end of autumn.

When do Rudbeckia flower?

You’ll find these lovely plants in UK gardens and growing wild from mid-summer to the first dusts of frost in winter.

Do Rudbeckia grow back every year?

Yes, they may be perennials but certain varieties are often treated as annuals.

They prefer full sun, but the plants will also flourish in partial shade, provided there’s still a far amount of golden rays they can soak up from time to time.

What kind of scent do Rudbeckia flowers have?

These flowers do not actually have any scent at all, but their durability and beauty appear to make up for that for plenty of gardeners on both sides of the pond.