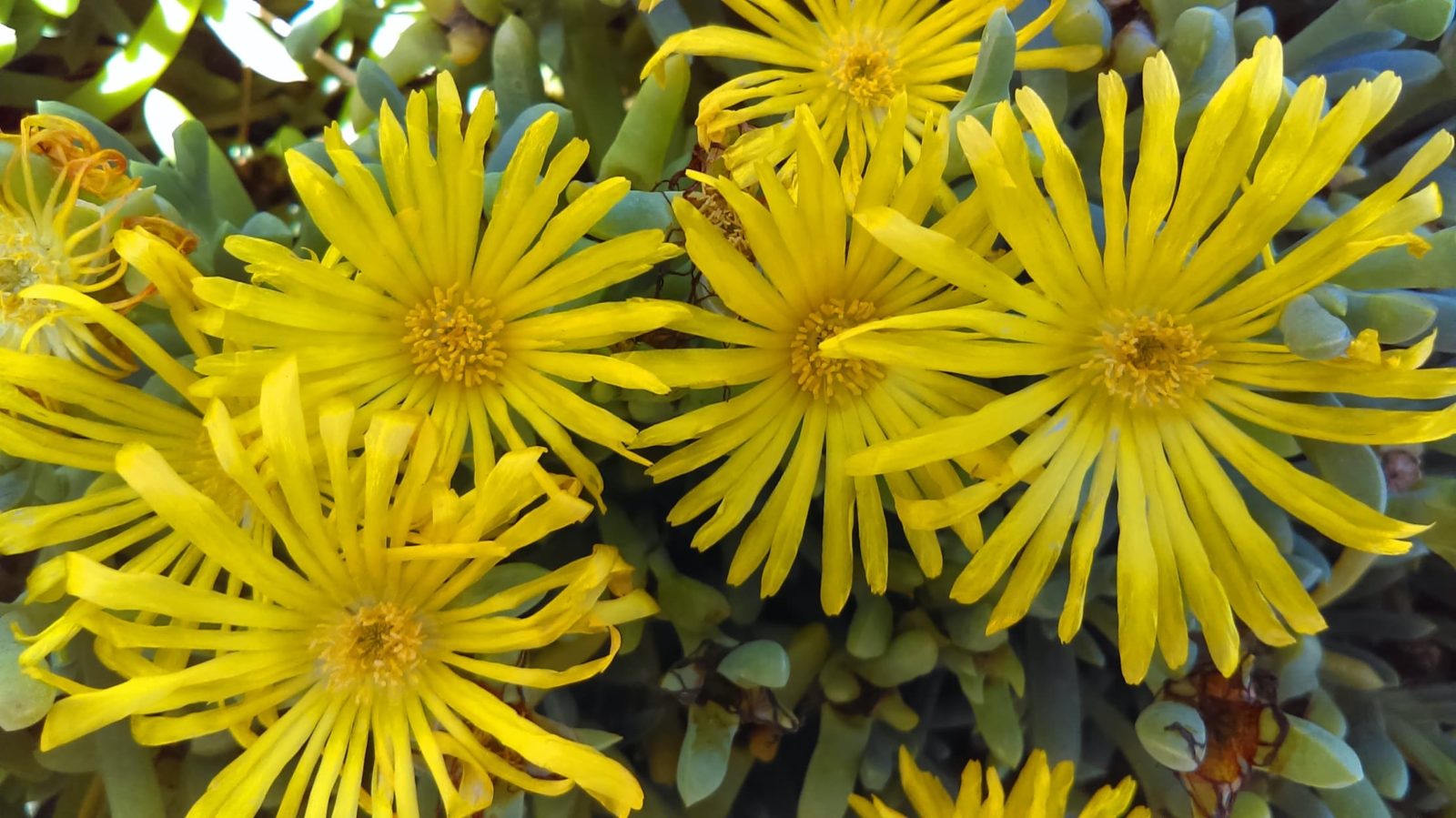 16 Wondrous Flowering Shrubs For Shade In Your Garden

Yellow flowering perennials can bring the twin advantages of low maintenance with high impact for your garden’s palette.

Bringing a splash of sunshine to your garden, these reliable crowd-pleasers can make it feel like summer even when temperatures drop and the nights begin to grow longer.

By selecting perennial varieties too, you can reap the benefits of a hardier plant that’ll require little maintenance – while mixing and matching the plants you choose can result in continual blooms from early spring right through until the end of autumn.

If you’re looking for inspiration for which yellow flowering perennials to introduce into your garden, this list of our favourites should give you plenty of food for thought.

Yarrow blooms in a range of different colours, with yellow, white and pink being the most common varieties.

They’re immediately identifiable by their tight clusters of tiny flowers, whose flat-topped appearance calls to mind a levelled-off umbrella.

They’re hardy plants that love the sun, thriving in well-drained soil and blooming from the end of spring to the beginning of autumn.

Their delicate leaves, feathery to the touch, give off a pleasing aroma when crushed.

Although not a true native flower, corn marigold has been fully naturalised across much of northern Europe today. [source]

It has upright stems growing to a medium height, topped with large, daisy-like discs of brilliant yellow.

It grows well in most types of soil, though it does not react well when exposed to lime, and it enjoys as much sun as you can give it.

Its eye-catching yellow blooms occur from late spring to early autumn and are complemented by its bluish-green foliage, which is covered in a fine waxy layer and emanates an attractive odour.

The plant is hugely popular among bees and butterflies, making it a great pollinator that encourages garden biodiversity.

The pale yellow of the primrose is one of the first signs that spring has sprung, and as such can inject a welcome dose of colour into your garden come March.

Its rosette-shaped flowers grow up to 4cm in diameter and will offer a pleasing contrast to the greenery around it, while it flourishes best in soil that receives some shade.

If planting in full sun, make sure the soil is always moist and be mindful of aphids and other pesky insects which feed upon it.

The name of the flower comes from the Latin prima rosa, meaning first rose of the year. [source]

It’s no surprise, therefore, that it’s one of the earliest bloomers, although April 19th is officially known as “Primrose day” despite the flowers blooming long before then.

The reason? That date is the anniversary of former UK Prime Minister Benjamin Disraeli’s death – and the primrose was his favourite flower. [source]

This delicate flowering perennial grows up to 25cm in height and features oversized daisy-like heads, with bright yellow disc florets at their centre and white petals

It used to grow wild all across the UK, but now is confined mainly to the southwest of England.

However, it can be cultivated fairly easily in your garden in well-drained soil receiving full sun, but requires regular pruning to encourage dense growth.

The plant gives off a pleasing apple scent when crushed.

Unlike the other entrants on this list, juniper is an evergreen shrub rather than a flower.

However, it does produce small yellow blooms in May and June, which are closely followed by juniper berries.

Gin enthusiasts will know all about these, with the name of the spirit actually coming from either the Dutch (jenever) or French (genièvre) word for the plant. [source]

Juniper grows best in well-drained soil, but is hardy enough to flourish either in full sun or partial shade.

It also requires little in the way of maintenance, but growers should keep in mind that its berries and flowers are significantly outperformed by its sprawling and spindly foliage – so planting locations should accommodate its prickly nature.

As the name suggests, this plant is not native to the UK, but rather hails from North America.

It is considered an invasive species due to the fact that it quickly outgrows its space and outcompetes native rivals, causing significant damage to local flora if left unchecked. [source]

Having said that, it is freely available from garden centres throughout the country.

After one look at its stunning appearance, it’s not hard to see why.

Despite the unpleasantness of its name, skunk cabbage boasts brilliant yellow flowers up to 30cm in height, bolstered by broad leaves growing up to 90cm.

It can add a touch of exquisite elegance to a pond or other water feature (it thrives in fertile and very moist soil) but just remember to ensure it doesn’t encroach on neighbouring species.

There are a wide variety of different sunflower species to choose from when it comes to bringing some of their tall and slender splendour into your garden.

Smaller varieties such as H. salicifolius won’t take up as much space as their larger and more attention-demanding cousins like ‘Lemon Queen’ or ‘Solar Chocolate Gold’, so do your research beforehand to find the species that suits your needs best.

Whichever one you plump for, the sunflower invariably performs best in fertile and moist (but well-drained) soil.

It also demands plenty of sunshine exposure (as you might guess from its name), while it’s also susceptible to slugs and requires pruning after flowering due to the fact that old stems die away in the winter months.

Again, Helenium (or sneezeweed as it is more colloquially known) comes in a wide range of varieties.

One of our particular favourites is ‘El Dorado’ (pictured above), which features upright clumps ending in bright yellow flowers (tinged with red) centred around a brown cone.

Blooming from midsummer to early autumn, the flower is the perfect addition to any yellow floral arrangement.

In order to prolong its bloom, it’s important to deadhead it periodically, while it should be pruned halfway after it has bloomed and cut back all the way to its base in winter.

This bulbous perennial plant can grow up to 40cm in height and features tight clumps of grey-green leaves, topped with star-shaped flowers of a yellow variety in early summer.

It performs best when exposed to full sun and also prefers reasonably fertile soil, but it doesn’t require much in the way of maintenance after planting and can fend off most pests on its own.

It’s an ornamental onion plant and although it won’t bear edible produce for humans, it’s a favourite among bees, moths, butterflies and other pollinators, so it’s a good one to have around the garden in order to encourage biodiversity and promote growth.

Like the Skunk cabbage mentioned above, Hooker inula is non-native and invasive.

Originally hailing from the Himalayan mountains, it can propagate quickly and interfere with the development of plants in its vicinity, so be sure to choose your planting site with care when it comes to finding room for it in your garden. [source]

However, it is also just as eye-catching as the Skunk cabbage, meaning its invasive properties shouldn’t discourage inclusion in your display.

With oversized flowers capable of growing up to 8cm in diameter and thin, tapering petals, it’s sure to draw the attention of visitors to your house throughout the summer months when it’s in full bloom.

It enjoys partial shade and fertile, well-drained soils, but it’s resilient enough in most situations and works well in borders and beds.

Also known as the Peruvian lily, Sweet Laura is another striking non-native species that has become increasingly popular in gardens across the UK in recent years.

That’s largely due to the brilliance of its flowers, which feature yellow petals flecked with a deep maroon and protruding stamen of the same red hue.

It forms compact mounds and blooms from early summer to early autumn.

This plant likes moist but well-drained soils and will cope well in most conditions, but does benefit from mulching annually in the first two years after planting.

This knee-high perennial offers everything you might want in a yellow flowering plant for your garden.

It’s incredibly easy to cultivate, requires minimal maintenance and produces masses upon masses of daisy-like flowerheads each summer, blooming throughout the warmer months and into autumn.

The only real demand it places upon you is adequate soil drainage and full sun exposure.

Its sprawling yellow flowers complement a variety of backgrounds, from dense green foliage to spikes of startling colour.

It also makes a beautiful cut flower in its own right, while the lovely aromatic scent given off by its foliage will stimulate the nostrils as well as the eyes.

All in all, it’s an excellent addition to any garden due to its versatility, hardiness and eye-catching aesthetic appeal.

Daylilies come in a variety of different forms, from the pastel yellow of ‘Stella de Oro’ to the pink and yellow ‘Catherine Woodbery’ to the more exotic reds, pinks and purples of other species.

Regardless of which one you pick, they will invariably add irrepressible energy to your garden with their trumpet-like blooms and delicate petals.

Although individual flowers only last for a single day, a daylily plant will produce plentiful blooms throughout summer, meaning your displays will looks fantastic for weeks on end.

They are hardy enough to require little care or maintenance, growing in sun or partial shade and being unfussy when it comes to the type of soil.

They don’t require pruning, either, though they can be pared back right down to their base after flowering in order to encourage more growth the subsequent year.

Irises come in a lovely spectrum of different colours – but perhaps none are quite as resplendent as the ‘Golden Eclipse’.

Its feathery petals communicate an image of fragile beauty, while its alluring odour and pleasing aesthetics are sure to turn the heads of any visitors to your garden during June and July, when the flowers are in full bloom.

Irises thrive when grown in full view of the sun and they prefer fertile and well-drained soil with slightly acidic content.

After two years or so, they should reach their full height of around one metre, while you can encourage continual growth by removing fading foliage in early autumn – then stripping them back completely once all flowers have withered later on in the season.