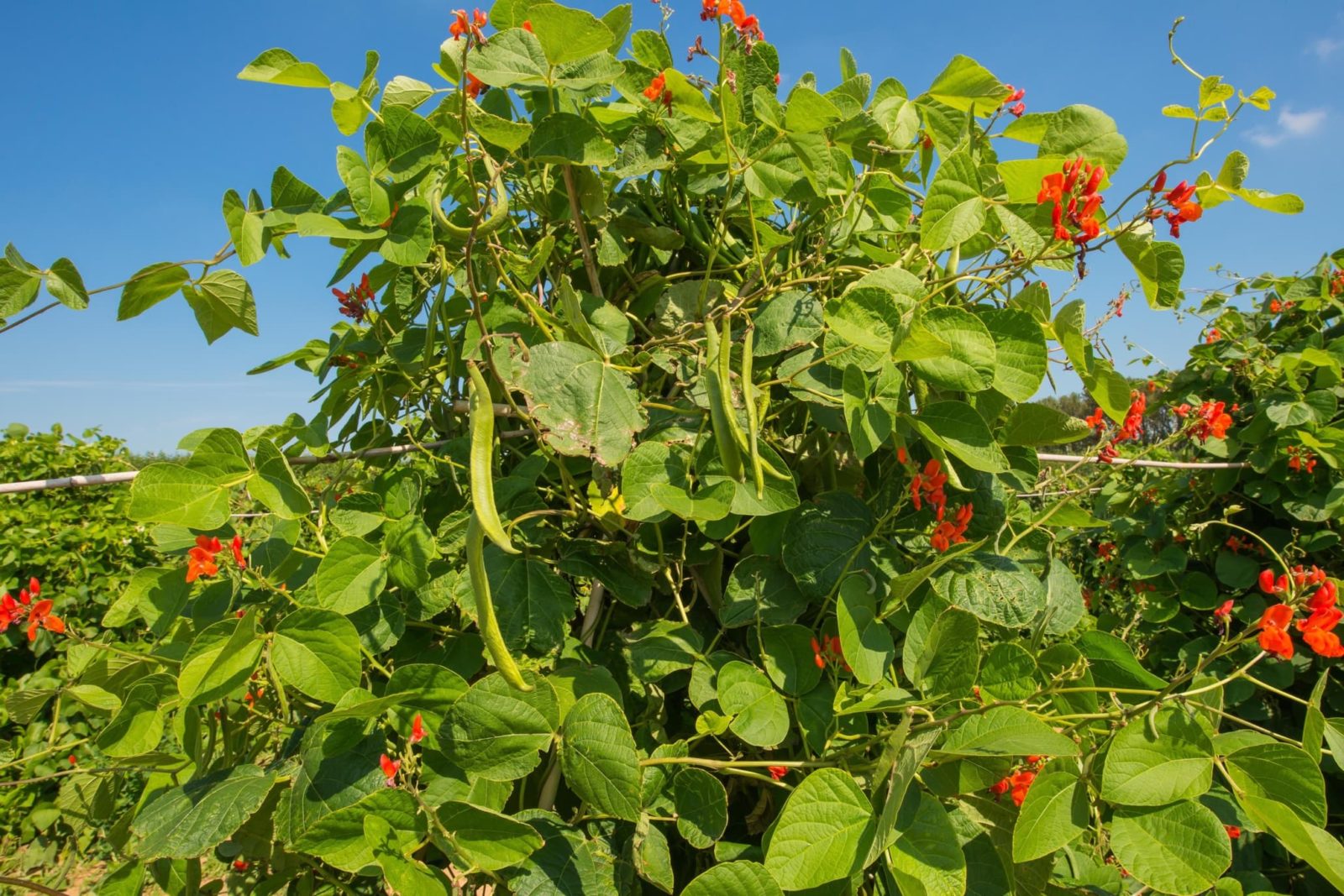 Runner beans have been a staple crop of gardeners and growers for decades. They are an easy vegetable to grow, often producing hefty harvests from the middle of summer until early autumn.

They are a favourite of slugs and snails, but if protected well whilst young, will provide an ample supply of long green beans to pick and eat for weeks on end.

They can be so prolific that you may well end up with a freezer full of them to tide you over through the winter months.

What are runner beans?

Phaseolus coccineus, better known as ‘runner beans’, originated from South America. They are actually a perennial plant, but not being frost hardy are usually grown as an annual here in the UK.

They were introduced to Eastern Europe around the 17th century when they were also grown as an ornamental plant. Runner beans don’t crop well in high temperatures, which is why they are well suited to our typical summers.

In warmer countries such as America and Germany they are grown ornamentally for their red, white and bi-coloured flowers and attract pollinators.

Well known varieties commonly include Benchmaster, Lady Di and White Lady, all having been given the Award of Garden Merit (AGM) indicating that they perform reliably well in the garden.

Runner beans are delicious – they are great cooked and added to a main meal or tossed into a bowl full of pasta or a curry.

How to grow runner beans

Runner beans are easy to grow and being large seeds are a great vegetable to grow with children.

They can be given a head start by sowing indoors in late April or May, or directly into the ground outside in late May or early June. They are also readily available as young plants.

Place on a sunny window sill or in a propagator, keep well-watered and germination should occur within 7-10 days.

Seedlings can be planted out once hardened off and the last risk of frost is over, typically around late May in the UK.

Once the last risk of frost is over, sow two seeds at the bottom of each cane or support at a depth of 5cm. Water well and germination should occur within 7-10 days.

Thin to one seedling per cane for support and fiercely protect from slugs and snails.

Runner beans like to grow in full sun, but can do well in part shade as well.

They are hungry plants and will be happiest if lots of well-rotted manure or homemade compost is added to the soil for them to get their roots into.

Runner beans can easily grow to 2.5M high so lots of vertical space and support for them to grow upwards are needed.

Making supports for the beans to grow upon is half the fun of growing them. Most commonly used are bamboo canes formed into a tall A-frame or wigwam with canes spaced 20-30cm apart.

These canes need to be securely pushed into the ground and tied together with string or cable ties, as the weight of the mature plants can be considerable and act like a sail in high winds.

Coppiced poles can be used for a more sustainable approach. The most widely used wood used for bean poles is hazel. These hazel rods are more expensive than bamboo canes but are decisively stronger, considered more attractive and should last for several years.

Runner beans are a climbing plant but will need tying-in to their supports whilst young.

Once they have reached the top of their support their growing tip can be pinched out to encourage a bushier habit.

Runner beans are not only hungry, but thirsty plants and especially need water when in flower to encourage the pods to set.

Mulching around the bottom of the plants is recommended as this will help lock in and conserve moisture.

The plants need copious amounts of water, in hot dry weather you can tell they need water by the wilting foliage, but aim for a good drenching at least twice a week.

Being hungry plants, runner beans will benefit from a liquid feed applied to the roots every two weeks. Tomato feed can be used at half the usual concentration rate.

Once the beans finish cropping, remove the supports and cut the plants down to 5cm high leaving the roots in the soil. By doing this the roots will rot down feeding the soil with nitrogen for the next crop such as brassicas.

The beans can appear in as little as 12-16 weeks from sowing and continue until early autumn in the right conditions. The beans are ideally picked when 20cm long.

It is best to harvest little and often, which does not let the beans grow too large and become stringy. Even if you don’t have enough one day to cook they will happily last a few days in the fridge until you have more.

Picking the beans can be a rewarding task as you reap the toils of your previous hard work and a great activity to include children in as they often hide under the foliage and need finding.

Runner beans can be toxic if eaten raw. They contain lectins which are neutralised when cooked, which is a bonus as cooking also makes them tastier and easier to digest.

The easiest way to cook is to top and tail the ends, remove the edges and slice lengthways with a sharp knife into thin strands before boiling or steaming for 3-4 minutes until tender. You can even purchase a bean slicer that will slice and string the beans for you, speeding up this task even further.

Runner beans freeze well which is great as you may well have more than you can eat fresh and there is nothing more satisfying than filling the freezer with homegrown produce to see you through winter.

To freeze prepare the beans and blanche or add to a pan of boiling water for 2-3 minutes. Then transfer to a bowl of cold water until completely cool, drain and freeze in suitable amounts. Once frozen they will keep up to 6 months.

Weeds can cause havoc with runner bean plants.

Not only do they compete for the much-needed nutrients, moisture and space in the soil, but they can even restrict the growth of young plants.

By removing the weeds little and often they will not be allowed to take over and the result will be healthier bean plants and a bigger harvest.

Runner beans plants, especially when young are a gourmet delight to slugs and snails. It can be so disheartening to find your seedling decimated overnight, so prevention is key.

Sowing in pots means you can plant out larger more established plants when ready which will be less susceptible to damage.

If sowing direct, surround the seeded areas with a barrier such as wool pellets, copper tape or eggshells and be vigilant.

You’ll be amazed at how many slugs and snails you can remove by hand early in the morning or late at night.

Black bean aphids or black fly as they are more commonly known are probably the most common pest of the runner bean here in the UK. Tiny as they are, they can severely weaken plants and attract ants that feed off the honeydew left behind.

The blackfly tend to go for soft young shoots, but will often congregate on the underside of leaves as well. Non pesticide control includes squashing by hand, spraying gently with water and encouraging ladybirds and hoverflies which will devour them.

Pesticide controls can include spraying with fatty acids, plant oils and insecticides such as deltamethrin and cypermethrin. It should be noted though that pesticides should not be applied when the plants are in flower to avoid any danger to bees and other pollinators.