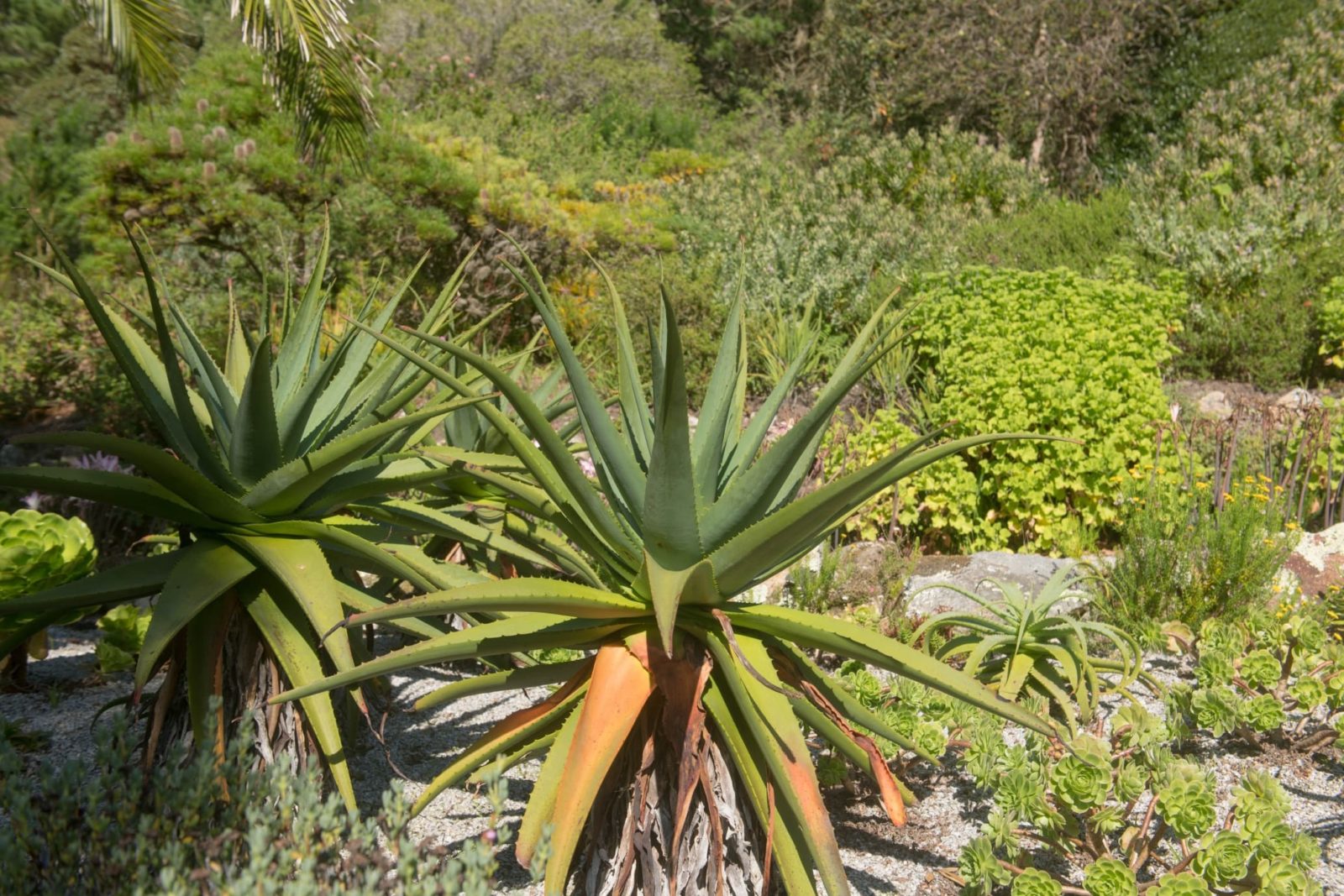 How (And When) To Harvest Courgettes

Bring a touch of tropical charm to your garden with these spiky specimens.

There’s something about a spiky plant that instantly suggests humid temperatures and exotic climes.

Of course, many cacti, succulents, palms and their other prickly comrades only grow in hot and arid landscapes, so it’s only logical that they carry with them connotations of a tropical paradise.

On the other hand, it may surprise you to learn that there are a handful of these spiky specimens that have adapted well to the Great British climate.

Although they may be natives of warmer regions and prefer the heat, they can cope well enough with a sharp fall in mercury, many of them surviving sub-zero temperatures with ease.

That’s not to say that you shouldn’t take precautions to protect them as best as possible.

Potted varieties can be moved indoors or into a greenhouse during winter, while polytunnels are also an effective tool in keeping them safe from the more inclement elements.

However, on the whole, this collection of sharp-edged plants are hardy enough to handle anything the colder months throw at them.

So if you’re considering adding an edge to your outdoor display, look no further than the nine suggested specimens below.

Hailing from Mexico, this striking plant takes the form of a spiky ball atop a chunky trunk, with the potential for more than a single trunk to develop in the right conditions.

Capable of reaching two metres in height, it’s a perfect way to make a statement with stature in your garden.

The leaves of the tree are long, sharp and extend in all directions away from the central sphere at the top of the trunk.

Depending on the variety, they can take on a grey or bluish tinge to their greenery, with yellow variegations possible as well.

This makes them an excellent option for adding colour and intrigue to their surroundings.

Best of all, yucca linearifolia (pictured above) are hardy up to -15°C, meaning they should survive the extremes of winter even in the most northern parts of the country.

As long as they enjoy a sunny location with soil that drains freely, they’ll be happy enough.

A close relative of trachycarpus fortunei, this oriental specimen has been favoured by Japanese horticulturalists for generations due to the neatness of its architectural form.

They were first brought to the UK in 1873 by Albert Wagner (hence their name) and have steadily grown in popularity since. [source]

Unlike most palms, Trachycarpus wagnerianus actually thrive in windy conditions, though a coastal one which is constantly buffeted by gales may be asking too much of them.

Aside from demanding good drainage, however, they’re a largely unfussy species which will need attentive hydration immediately upon planting, but can tend to themselves thereafter.

In terms of appearance, they’re compact creatures which tightly fanned leaves of dark green, growing atop a hairy trunk that can exceed five metres in height.

Although they cope better in containers than some other trachycarpus, they’re ultimately better suited to being planted in the earth.

Speaking of palm trees, no list of spiky plants that can handle UK temperatures would be complete without a mention of the only palm that’s native to Europe.

Known as the European fan palm for that reason, Chamaerops humilis is a great option for creating an exotic focal point in your garden.

It’s a more space-efficient option than the trachycarpus mentioned above, rarely exceeding head height, while its profusion of fanned green leaves (extending up to half a metre in length) are located lower down the trunk, meaning its spread often outpaces its height.

Although it can cope with strong winds more comfortably than the trachycarpus, it’s not quite so adept at withstanding frozen terrain.

As such, planting it in a pot which can be removed indoors during the winter months might be a good option if it’s available to you.

Known as New Zealand flax, Phormium are hugely popular perennials for adding a splash of colour and a dollop of architectural excitement to any planting scheme.

With long, evergreen blades in a variety of shades, they’re ideal for brightening up dull landscapes in the winter months.

The ‘Joker’ cultivar is prized for its impressive foliage, which carries a delightful mix of green and pink that creates an unusual aesthetic impact.

They’re especially effective when made the centrepiece of a gravel garden or oversized border, growing up to a metre in height and slightly more in spread.

They’re impressively adapted to cope with high salt concentrations in the air, which makes them a good candidate for coastal locations.

However, they’re not keen on extremely strong winds, so would benefit from a sheltered planting spot, while some mulch on their roots during winter would not go amiss, either.

This stunning spiky specimen is known colloquially as the spiral aloe and it’s not difficult to see why.

With five layers of stubby, egg-shaped leaves curling into an aesthetically pleasing spiral, it’s a form of the genus that’s beloved by gardeners across the globe.

The symmetry of the rosette is particularly attractive in mature plants.

It’s capable of reaching up to half a metre in height and double that in spread, while the yellow or purple tinge at the tip of its leaves adds another dimension to its appeal.

For the best results, you might want to confine your aloe polyphylla to a pot so that it can be moved indoors in the wintertime.

During that period, treat it like you would any other houseplant, but it’ll handle outdoor conditions for most of the year without issue.

Another European native, blue sea holly is a low-maintenance perennial that boasts tall flower stems shooting forth from dense clumps of dark green foliage at their base. [source]

At their head, conical flowerheads of a striking blue are surrounded by a bract collar of bluish-purple, white or silver, depending on the exact type.

For this reason, they look somewhat akin to an oversized thistle, though the metallic glow that they take on in sunshine (changing hue depending on how the light catches them) sets them apart from their Scottish counterparts.

They were once a fairly specialised commodity in the UK, making them tricky to get hold of, but these days they’re a common offering at garden centres around the country.

They grow extremely quickly and will flower in the same year they’re planted, while they’re impressively resilient and long-lasting once established.

As the name suggests, this popular agave is native to the USA and Mexico, meaning it’s not the most logical choice for UK planting.

And while it won’t tolerate the colder climes of northern regions of the country, it’ll do just fine in warmer areas, especially if lent a helping hand.

It’s highly drought-resistant and actually is threatened by too much rainfall, so the construction of a polytunnel during the wetter months is one way to safeguard it.

Mature specimens should be able to deal with the cold (but not the wet) weather, though you may wish to move them indoors if container-planted just to be on the safe side.

The enormous rosette of elongated leaves, lined with dangerously barbed edges, are quite a sight to behold.

At the same time, those patient enough to wait several decades for it to flower will be richly rewarded with green-yellow blossoms, too.

Did you know that there are even species of cactus that can be cultivated in the UK?

Opuntia howeyi is one of those, with its lemon chiffon flowers, spiky pads and red fruits making it much easier on the eyes than it is on skin contact!

The multitude of spiky hairs that cover its leafy pads are easily dislodged when brushed against, then attaching themselves to the poor unfortunate who has upset them and causing the individual significant discomfort in the process.

As such, consider planting them well back from paths to avoid accidental exposure.

It’s fairly compact and shouldn’t spread too much more than 35cm, meaning it’s a good option for smaller gardens.

It doesn’t like an excess of moisture, especially during winter, so take steps to keep it dry if you can.

Other than that, it’ll handle neglect without too many problems.

Another spiky plant from the north of Mexico, Nolina nelsonii is characterised by a sturdy trunk which can grow up to two metres in height. [source]

At its summit, it’s crowned by an impressive ball of protruding blue-green leaves that can reach two metres in diameter, as well.

It’s known in some parts as the ‘Blue Beargrass Tree’ and despite its tropical origins, it’s developed to deal with British climes fairly well.

Hardy up to -15°C, it demands good drainage and as much sun as you can afford it, but otherwise will thrive in most parts of the country.

Its ability to deal with drought well makes it an ideal choice for drier soils in which other plants struggle.

It’s also fairly fast growing and within a matter of years, you’ll have an impressive specimen on your hands.