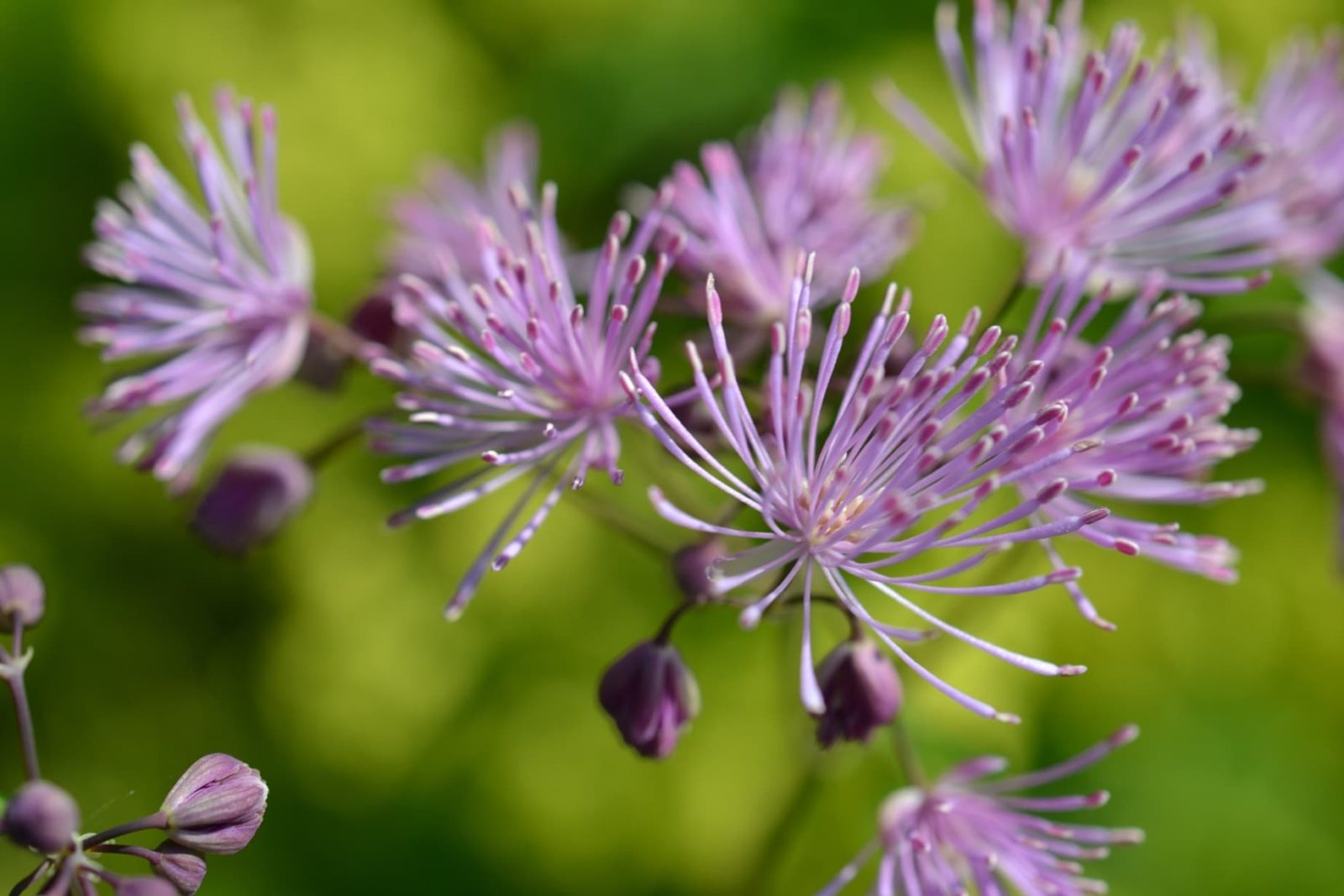 With its tall height, impressive blooms and undemanding maintenance, thalictrum is a dream addition to any garden.

More commonly known as “Meadow Rue” (or, in some parts of the United States, “Feathered Columbine”), thalictrum is a beautiful meadow flower which will bring scale, energy and colour to any back garden. With some varieties capable of exceeding two metres in height, it’s a plant that will tower over other species, providing pleasing contrast to smaller shrubs and ferns. There’s something about the way that its delicate clumps of flowerheads catch the wind, swaying atop their slender stems, that eases the heart and pours balm on the soul.

Even better, this picturesque flower doesn’t demand the attention that might be expected of such a visual crowd-pleaser. In fact, thalictrum is one of the hardiest and therefore easiest plants it is possible to grow; it isn’t too fussy about its exact planting conditions, while it doesn’t require a whole lot in the way of maintenance throughout its lifespan, either.

As a result, it’s easy to see why thalictrum is such a popular option in garden centres and back yards up and down the British Isles. For any green-fingered enthusiasts looking to bring this elegant perennial into their own home, this informative guide should give you all the hints and tips necessary to coax a marvellous display from your thalictrum, year after year after year.

When most people hear the word thalictrum, they probably think of the willowy perennials found in woodlands and meadows across the UK. While the taller variety of the plant is probably the most famous, there are actually more than 130 thalictrum species across the globe. These can vary hugely in appearance and nature, from dwarf strains which straddle the ground to the towering airy specimens famous at home.

If you’re looking to plant thalictrum in your own back yard, there are plenty of options to choose from. For those searching for more specific inspiration, here are a handful of our favourite thalictrum varieties:

How, when and where to plant thalictrum

Whichever species of thalictrum you decide to plump for – or whether you prefer to mix and match varieties to create a multi-level and multi-layered spectrum of colour in your garden, it’s reassuring to know that it invariably performs well in almost all conditions. The height of many species means that it might be advisable to plant against a wall or fence, but they make great additions to any border.

They’ll perform well in full sun or partial shade and will tolerate most soil types, though they prefer fertile, slightly acidic and well-drained land to bring best results. If replanting a thalictrum species from a pot, dig a large hole to give plenty of room for the roots to manoeuvre, then add some top-quality compost and fill in the excess with soil. Water plentifully, especially at the outset, to ensure that the thalictrum takes to its new home without any issues.

As for when to plant thalictrum, that depends on whether you are using fresh seeds or divided plants. If the former, plant the seeds in the autumn at a depth of at least 3mm and ensure the soil remains moist throughout the colder months. Germination can be unpredictable and takes anywhere between two weeks and two years to occur. If planting from divided plants, space the specimens at a remove of 15cm (for dwarf varieties) and 90cm (for tall varieties) from one another and plant them in the spring.

One of the most attractive aspects of thalictrum – other than their eye-catching blooms in spring, summer and autumn – is the fact that they require very little in the way of upkeep. It’s a good idea to mulch the soil and even perhaps lightly fertilise it when spring rolls around, but neither action is absolutely imperative. The only real necessity is ensuring that the soil does not dry out completely after a long spell of arid weather.

Fortunately, thalictrum is not susceptible to many diseases or pests, meaning it doesn’t require too much attention for the entirety of its lifespan. You may wish to pare back the stems after flowering, although there is value in leaving the blooms to wither in autumn and early winter due to the attractiveness of the seed heads even as they are dying off. If you do wish to pare it back (or take cuttings to replant elsewhere, for that matter), be careful when snipping roots and stems, because the sap from thalictrum has been known to cause skin irritation.

Due to the height of many thalictrum varieties, staking their stems is a popular method of providing support to the top-heavy flower blooms. While this can be very effective and actually essential in some cases, one of the most striking things about thalictrum is the almost performative way in which the flowers dance and float upon the breeze. Staking them might provide support, but can also restrict this aesthetically pleasing movement.

One alternative is to plant complementary and contrasting shrubs and plants in its vicinity, such as Delphinium, which can provide support for its growth without encroaching on its mobility. Another method of avoiding the worst effects of a blustery wind is to plant the thalictrum in an area not exposed to strong gusts, such as against a wall or fence. This, too, can provide support without inhibiting movement as much as staking might.

Though the exact flowering times of thalictrum will vary depending on the specific strain you opt for, they generally bloom from early to mid-July. They should continue to produce impressive displays throughout summer and, even when they begin to die away in autumn, the seed heads can still look impressive for months after the blossoms have long since withered away.

As the plant dies off, the foliage will turn from the bright green which gives the plant its Latin name (a literal translation is “grow green”) to a faded ochre colour. This can create an eye-catching contrast with the plants around it, meaning you may want to allow the plant to die off completely before becoming involved yourself. Its tendency to change colour in the colder months makes it one of those herbaceous varieties which still produce impressive results even after they have exited the blooming stage.

Once the thermometer drops below zero and frosts begins to set in, the foliage will collapse altogether. Now is the time to act. You may pare it back down the base in order to encourage new growth in the following spring. As a perennial, thalictrum doesn’t require much more maintenance than this and can, in fact, be left to its own devices for much of the year without more input required.

How to propagate meadow rue

A self-seeding perennial, thalictrum will naturally grow back the following year with little to no input from your side. Fortunately, it doesn’t propagate naturally to the extent that it becomes invasive towards other species, but it can on occasion branch out into areas that you may have designated for other flora. As such, it’s a good idea to perform regular checks on its development to ensure that it doesn’t spill over into neighbouring parts of the garden.

As mentioned above, it is possible to divide clumps of thalictrum in order to reduce its growth in one area or to replant it elsewhere and propagate it around your back yard. However, it’s unlikely you’ll ever to divide thalictrum for the former reason, since it can be trusted to play well with others for many years at a time and does not require constant maintenance, like some other perennial plants do.

When tackling the division and propagation of thalictrum clumps, it’s best to do so in the spring, when the new offshoots have the best chance of taking root. When selecting a clump to divide, choose one which is already well-established and shows impressive growth, then dig up its roots entirely and use a spade to split it in half. Then simply plant the two halves in the desired location, ensuring they receive plenty of water in the first few weeks to maximise their chance of survival.

When pairing thalictrum with other types of greenery in your back yard, there are two important aspects to consider: height and colour. Most thalictrum varieties are on the tall side, so partnering them with shorter and squatter shrubs and ferns is an excellent idea. Not only will the differing height ranges create a tiered effect that is pleasant on the eye, but the smaller plants will also provide support and stability to the peaks of the thalictrum as it towers above them.

The palette of your pastoral scene is the other main element you’ll want to keep in mind. Most thalictrum flowers range from white to purple via pink, lilac and lavender, which means they look stunning enough set against a sea of green leaves. If that sounds sufficient to you, consider planting thalictrum in amongst a variety of grasses and ferns.

On the other hand, you might wish to combine them with other brightly coloured bouquets to create a rainbow of flowers in your borders and beds; phlomis, alliums, iris, delphinium, clematis and primrose are all excellent options here. Indeed, another of thalictrum’s main strengths is its versatility, meaning there is a plentiful array of options that will work well. The choice is yours.