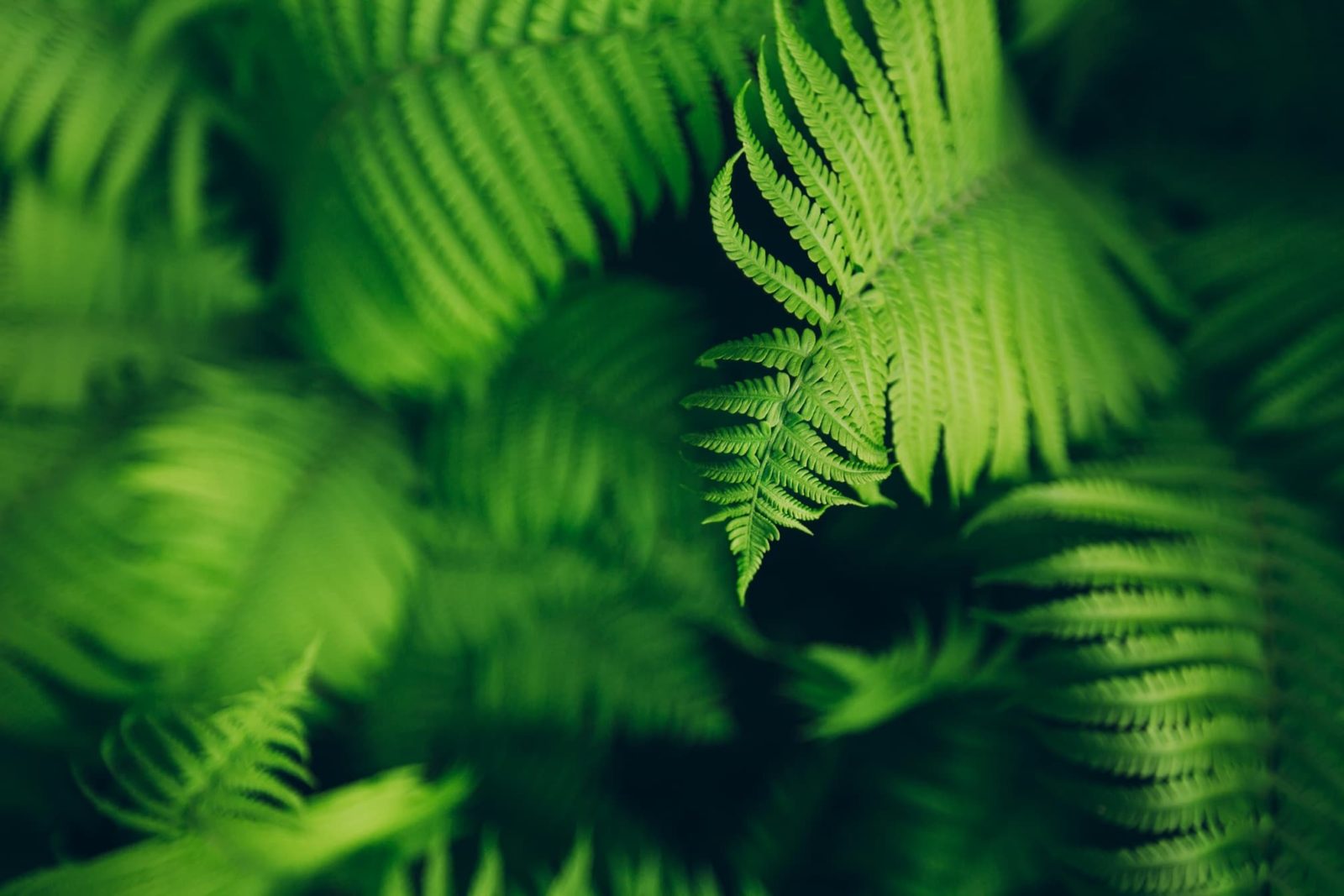 Ferns are fantastic plants that can find a place as valuable additions in many British gardens.

Ferns are vascular plants that reproduce via spores. They have no seeds or flowers. Botanically fascinating, ferns first appeared in the fossil record around 360 million years ago. Many of the current families in this group of plants emerged around 145 million years ago.

One of the things that makes them so valuable as a garden plant for UK growers is that they are amongst the best plants for shade. Shade in a garden can sometimes be a challenge – whether it is a north-facing bed, or an area beneath mature trees. Ferns can often be fabulous plant to choose for such locations – allowing you to make the most of more tricky garden areas.

It is important to understand, when choosing ferns for a shady site, that there are different types of shade. But there are ferns suited to all those different types. Ferns can be found which can cope with a wide range of different conditions and environmental factors.

In this article, we will explore 20 of the best types of ferns to grow in the UK. Read on for help in choosing the fern or ferns that are right for your particular garden.

How To Choose Ferns for a UK Garden

The ferns that we will discuss in this article are divided into three categories. We will discuss some ferns for very wet and boggy sites, some for damp shade, and some for dry shade areas.

The most important thing to consider when choosing ferns for your garden are the environmental conditions. You may be tempted to choose ferns with reference first to the appearance of their foliage, and how they will look in your garden scheme. But first and foremost, it is important to make sure that you refer to the site itself, and choose the right plants for the right places.

Typically, ferns in general are considered to be specialists in marginal habitats. This means that they can provide solutions to a number of planting problems or conundrums in your garden.

Another interesting thing to consider is the role ferns can play in a forest or woodland garden. Certain species provide edible or medicinal yields, or are useful in other ways. So they can be utilised for more shaded areas in a low-maintenance forest garden or food forest.

If you are not familiar with the concept of a forest gardening, this is an ecologically sensitive and sustainable way to grow food and other resources. A forest garden is a garden that mimics a natural forest, but replaces typical plants with species that are of benefit to those who tend it. And to the system as a whole.

Forest gardens include a wide range of trees, shrubs, herbaceous perennials, roots, ground cover plants and climbers. Ferns could potentially form part of such growing systems, as well as simply being used ornamentally in a garden.

First of all, let’s take a look at some of the best ferns for very wet and boggy conditions here in the UK:

Lady fern is a naturalizing wetland plant. It prefers a moist site with moderately high atmospheric humidity. Especially shade-tolerant, these ferns are a vigorous deciduous plant that form clumps of lacy, bi-pinnate fronds. They prefer an acid soil (4.5 – 6.5 pH) but can tolerate more alkaline sites when plenty of leaf mould is added. These ferns are common throughout moist, sheltered woodlands in northern temperate zones. Young shoots are said to be edible (in moderation, and only when cooked).

Ostrich ferns prefer a pH between 5 and 6.5. They can cope well in wet sites, even in heavy clay soils. These plants are tolerant of shade and strongly dislike full sun. They make good ground cover when placed at a spacing of around 60cm. A highly ornamental plant, it has feathery fronds and establishes quickly. Young fronds before they uncurl are edible and sometimes sold in speciality markets. They are said to have a flavour that compares to asparagus.

Royal fern prefers swampy or moist soil, and like the above, prefers acidic soil conditions. Unlike the above, however, royal ferns can also grow in full sun as long as there is no shortage of moisture in the soil. This is a large fern that forms clumps of fronds up to 2.5m in height. The fronts bear rusty brown spore-bearing pinnae at the tips, and the foliage turns a pleasing reddish-brown shade in autumn.

Like the above, Sensitive fern is good for cool, moist areas. It can also work well in boggy sites or play a role in pond-side planting schemes. It is another deciduous fern that hears broad, light green, deeply lobed, pinnate fronts up to 60cm in length. One thing to note, however, is that this fern may become invasive in smaller gardens.

All of the ferns above are also suitable for a site that is not as wet, but is still rather damp. In addition to considering the ferns already mentioned above, however, you could also consider many other options. Here are some more options that are amongst the best ferns for damp shade:

This North American native is a deciduous or semi-evergreen fern with grow fronts around 50cm in length. The stalks are black, and adorned with green pedately divided fronds with oblong segments. Though hardy, they are sometimes also grown as houseplants. Naturally, they are found in moist soil near streams, often in rock crevices.

Characterised by their golden-green fronds, which grow up to 1.2m in length, Golden Shield Fern is a great choice for shade or partial shade. It is a hardy and adaptable plant that can thrive in quite a wide range of soils and settings. As the plants age, the golden-green colouration grows to a rich green, with golden scales on the stems.

Robust and resilient, this is another fern that can thrive in a range of different settings. It is a semi-evergreen plant which forms clumps of erect or arching fronds that are dark green and strongly serrated. This fern prefers moist, cool, lightly shaded sites but will grow in full sun as long as enough moisture is available. (It can also cope with dry shade if watered well until established and mulched well.)

This is another sturdy deciduous fern. This one forms clumps of lance-shaped, bipinnatifid fronds that can reach up to 1.2m in height. It is similarly easy and has similar requirements to the broad buckler fern mentioned above.

Evergreen (or almost evergreen) in mild areas, this fern forms a mat to a height of around 25cm in height. So it can be a great choice for creating ground cover. Its ovate fronds are made up of many fan-shaped segments. Often, these turn an attractive rusty-reddish-brown in autumn and winter. This is another fern that can, with the right approach, also be grown as a houseplant.

This evergreen fern forms a rosette of 30-75cm arching fronds in a deep, rich green. Spores are born in transverse stripes below the fronds. This option will tend to grow well in any humus-rich, moist but well-drained soil. It can also be somewhat tolerant to dry shade but only when watered well until establishment and mulched well.

This compact, low lying fern can be planted within a rock garden or dry wall. It has pinnate, delicate fronts and blackish stems. It will do best where there is a humus-rich soil and plenty of moisture, and prefers alkaline or neutral conditions. Avoid planting it where it will be exposed to bright mid-day sun.

This is a tufted evergreen fern that grows rosettes of lance-shaped green fronds with prominent rusty brown scales. It can reach around 1.2m in height. It likes a moist and humus-rich soil, but crowns should be protected from excessive wet in winter.

If you are looking for a fern that will have a bigger and more dramatic impact, you may like to consider a tree fern. Dickinsonia antarctica is the common tree fern. These are perennial evergreens, with stout brown trunks clothed in fibrous roots, with a large fan of pinnate fronts at the top. These grow slowly to an eventual height of up to 4m. They are evergreen, but may be deciduous in colder climate zones. They like a moist but well-drained fertile soil, rich in organic matter, but the crown should be protected from excessive water in winter. Winter protection will be required in all but the mildest of areas.

This is another tree fern that could be considered for some UK gardens. It can grow up to 6m tall, with a brown trunk-like rhizome and a fan of attractive fronds at the top. Again, these can be grown outdoors without winter protection only in the mildest regions.

While not a true tree fern, this option will eventually develop a trunk. This is another option that can be used to give a dramatic and tropical look in a shady and moist but free-drained area of your garden.

Finally, let’s take a look at some more ferns that are amongst the best ferns for dry shade in the UK. All of the Dryopteris species mentioned above can also cope with dry shade as well as damp shade. And here are some more options to consider:

This fern is native to East Asia. It forms rosettes of arching, broadly ovate, bipinnate fronds that start out pale green in spring then turn grey-green later. Stalks and the main veins have a purplish hue. It can grow best in moist conditions but can tolerate a much drier spot in full or dappled shade.

This neat and tufted evergreen fern is another that can cope in dry shade, though it also likes moist shaded sites. It forms spreading tufts of narrow, dark green fronds with linear pinnae. This fern prefers an acid or neutral soil.

While usually found in damp shady spots, it can also survive quite well in relatively dry conditions. It can be great for shade below or on walls, or beneath trees. It has leathery, ladder-like fronds with knobbly spots on the undersides that are the spores.

Like the other Dryopteris on this list, this fern can cope with a range of different conditions. This particular cultivar is one that can be chosen for dry shade. It has attractive fronds that open golden-green and turn deeper green as they mature.

Another adaptable, relatively low maintenance fern, this option is prized for its brilliant hues. New fronds in spring have a striking reddish-orange colour. And these contrast beautifully with dark green mature fronds. These fade to green as the season progresses, then draw attention in autumn with bright red stores on their undersides.

See more ferns for dry shade in this guide.

This list is by no means exhaustive. There are many different ferns to discover. But the 20 options above are certainly amongst the best to grow in the UK.