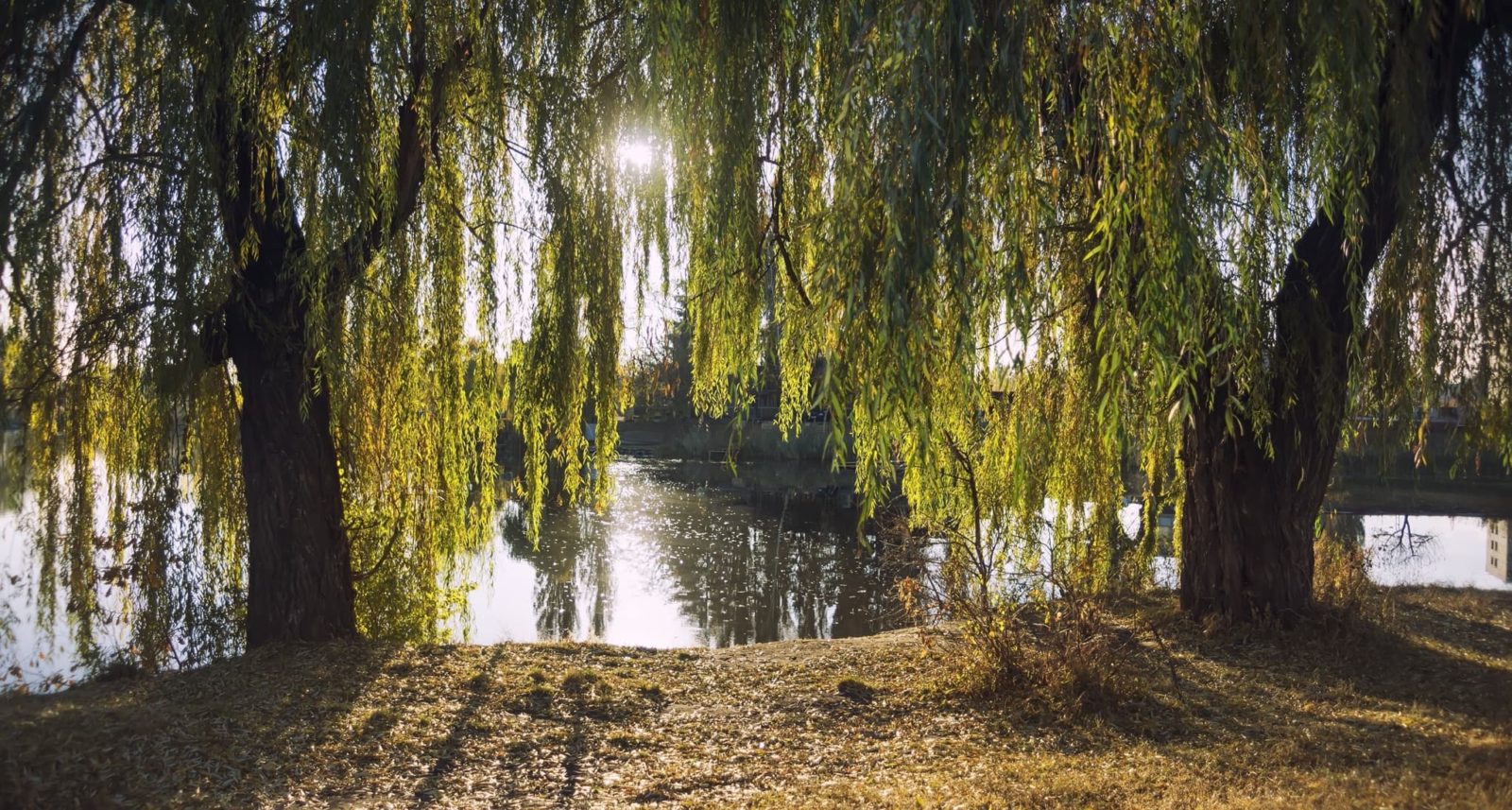 Weeping willow are beautiful trees which can find a place in many gardens.

But what exactly is a weeping willow? And is it the right choice for your garden?

Willow (Salix ssp.) is a genus of trees that can come in a range of shapes, sizes and forms. Weeping willows are plants within this genus that have pendulous branches, which bend over and drape towards the ground.

When people talk about weeping willow, there are a number of different trees to which they could be referring.

They are often referring to Salix babylonica – a deciduous tree with weeping form.

This is a medium-sized tree, which can grow to around 8-12m tall, with a width of around 4-8m. However, this tree does not usually thrive in the UK, and is now largely replaced with the below in cultivation.

This is a hybrid of our native white willow, and two other willows. This is common in parks and gardens and is one of the first willows to come into leaf, in March.

This is a large tree, which grows taller than 12m and wider than 8m.

Purple weeping willow, Salix purpurea ‘Pendula’ is another weeping willow to consider. This is a fairly compact willow tree, which grows to around 3.5 x 2.5m.

The term ‘weeping willow’ can also refer to Salix caprea ‘Pendula’, weeping goat willow or weeping pussy willow (Kilmarnock willow). This is an even smaller tree more suited to smaller gardens which will grow to around 1.5-2.5m in height and width.

Another small tree is dwarf weeping willow, Salix integra ‘Pendula’, which has a compact height and width of just around 1.5 x 1m.

Weeping willows have extremely attractive ornamental trees. Their pendulous form, along with their foliage and catkins produced in the spring make these very pretty trees to consider adding to a garden.

However, beyond their ornamental appeal, there are a range of other reasons to grow willows like these in your garden.

Willow bark can be used to make a rooting compound which is used to help cuttings to root more successfully.

The stems and bark are also very useful in basketry and in a range of other craft projects. And good charcoal can be made from the wood.

Beyond these uses, willow can also be useful in land management and in organic garden design. It can help in managing water and solving waterlogging or flooding issues.

Willows can also help to stabilise the soil with their vigorous and extensive root systems. What is more, weeping willows can be beneficial for a range of wildlife in your garden.

Where to Grow a Weeping Willow

Willows all like moderately deep, fertile soils in full sun.

They tend to like moist conditions and some can cope well with waterlogged or even wetland margin sites. They will often be positioned on a riverbank, or close to a garden pond.

They can cope with a wide range of different soil types and pH levels, and can cope with exposed sites. Some even cope with maritime exposure and willows also tend to have good tolerance to atmospheric pollution.

One thing to note is that willows, especially larger weeping willows, have extensive and moisture-seeking roots which can cause problems with drains. So do not place a weeping willow (especially a bigger one) too close to water pipes or a septic system.

Willows do not tend to respond well to transplanting, so care should be taken to plant them into their permanent positions as soon as possible.

These can be planted out at any time of the year. However, it is best to plant these out in spring or early autumn and to avoid planting during particularly hot and dry periods.

Willows can sometimes also be purchased as bare-root plants and planted out during the dormant period.

When planting a weeping willow, dig a hole that is the same depth as the root ball, and around twice as wide. You can consider adding mycorrhizal fungi to the planting hole to aid establishment.

Firm a mix of the existing soil and compost back around the root ball, making sure that the willow is planted at the same depth as it was before.

Make sure that you do not bank up the soil around the base of the tree. Mulch well with organic matter but make sure that this does not touch the trunk.

Caring For a Weeping Willow

Weeping willow trees should be watered well during dry periods, especially during the first few months as they become established.

These trees will need more watering in summer, and less as temperatures fall.

Your weeping willow should not require additional fertilisation as long as the soil is suitably nutritious and you mulch with organic matter.

Replenish the mulch around your weeping willow each spring to maintain fertility.

It is important to keep the area around a young weeping willow tree free from competing weeds and grass for the first couple of growing seasons.

However, as when planting anything else in your garden, you should think holistically and consider the other plants which could be placed close by to form guilds of companion plants that will help keep your willow tree healthy and create a resilient ecosystem.

If you live in an area with rabbits or deer, using a tree guard for the first couple of years after planting will be a good idea.

Do not prune a young weeping willow for its first year.

After this, you can prune damaged or diseased branches at any time of the year. To encourage a clear stem, prune lower branches off the lower portion of the main trunk in the winter months, during the dormant period.

They naturally form a well-balanced framework and need little pruning, if any at all. However, they can also be hard pruned to rejuvenate an older specimen, or pollarded if desired.

Weeping willows are beautiful and useful trees. If you have a suitable spot in your garden, there may be a weeping willow that is right for you.