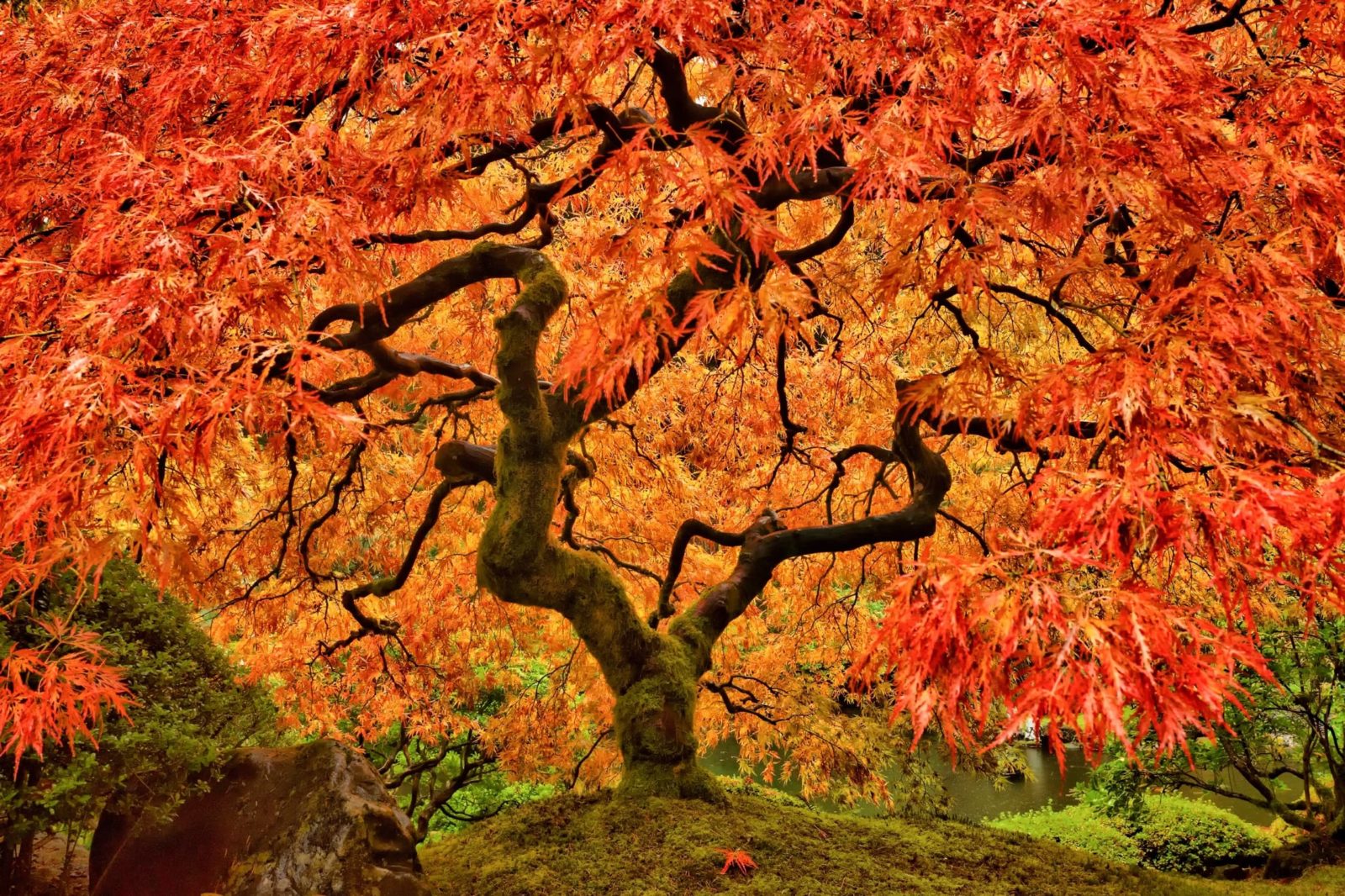 Japanese maples are small, deciduous maple trees with decorative foliage, known particularly for their spectacular display of bright red and orange-coloured leaves in the autumn months.

There are a variety of Japanese maples of all different shapes, sizes and leaf colours, so you can select one which will best suit your space. They make a great way to add colour and interest to your garden throughout the year.

Japanese maple can be grown outside in the UK – or, as the tree is small and slow-growing, it’s well-suited to container growth. The plant is hardy and grows well in shade and most soil types.

To add an oriental feel to your garden, accompanied by a burst of flaming red, orange and gold every autumn, read on for our best Japanese maple growing tips, for everything you need to know about caring for this colourful tree.

Japanese maples (Acers) are slow-growing trees originating from Japan and other parts of Asia. They have been cultivated and grown around the world since the 19th Century, and first arrived in the UK in 1820. The red cultivars in particularly are popular in Europe, and all colours are frequent additions to oriental-style gardens.

Most Japanese maple trees grow to a maximum of 1-2 metres in height – although there are some varieties that can reach up to 10 metres. Due to their small size, Japanese maples are ideally suited to smaller gardens, borders and containers.

There are hundreds of cultivars of Japanese maple. Acer japonicum varieties grow as small trees, whilst Acer palmatum are broader, and more shrub-like. Red Acer palmatum ‘Beni otake’ is a good choice if you want a faster-growing variety, that will establish quicker than most – although be aware that it can still take young trees several years to reach maturity.

Leaf colour varies dramatically across cultivars. New leaves can be anything from lime green to pink or purple, whilst autumn colouring ranges from yellow and orange, to bright red and burgundy. Other names for Japanese maple include red emperor maple and palmate maple (so-called after the shape of the leaves).

Japanese maples are most often grown from grafted trees, although it is possible to grow them from seed. The best time to plant them is from October to March. Although they are hardy plants, they do best when placed in sheltered spots, out of strong winds.

Most Japanese maple cultivars with green or lighter coloured leaves favour dappled shade, as full sun can scorch their leaves. However, red and darker leaved cultivars will require some sunlight in order to achieve a deep colour. The ideal spot for these would be sunny for a couple of hours in the morning and shaded for the rest of the day.

You can grow Japanese maple in your garden borders, or in a container – a container has the advantage of allowing you to move the tree between sunny and shaded areas. However, be aware that you will need to re-pot every couple of years.

Trees growing in a container will also need to be lifted off the ground and the roots covered with plastic over winter, to protect them from frost (trees growing in the ground should not require any protection).

As far as soil goes, Japanese maple is not too fussy, and will grow in a range of soil types, although it favours one with good drainage. It will thrive best in a soil which has a good amount of organic matter for nutrients, such as garden compost.

The roots require plenty of space to grow, so try not to position Japanese maple too close to other plants. Although they like to spread out, the roots don’t go deep – you should plant with the roots no more than 3cm below the surface of the soil.

Water the tree regularly when first planted, particularly over the first summer. Continue to water during periods of dry weather, or if growing your tree in a container. Add organic fertiliser and mulch to the soil annually in spring, to encourage moisture retention and aid growth (do not allow the mulch to touch the trunk, as this can cause it to rot).

Japanese maple trees naturally grow into a nice shape and require little pruning. Roots may need to be trimmed if growing in a container – see below for more information.

The native habitat of the Japanese maple is, unsurprisingly, Japan – as well as parts of China, Korea, Mongolia and Russia, where it grows in a temperate climate. It was first cultivated during the 1800s and now grows in many countries around the world.

Most cultivars favour a shaded or partially shaded growing location, although some sun is required for redder varieties. The tree can grow in most soil types, including sand and clay, although it prefers a soil with a high content of organic matter.

Where To Buy Japanese Maple

You can buy Japanese maple as grafted trees from garden centres and online retailers. If you’re seeking a specific variety, specialist growers and flower shows often have a more extensive range.

Choose a tree with a nice shape, and a well-balanced frame of branches. Look also for healthy-looking, colourful foliage, with no brown tips to the leaves, or obvious signs of pests.

You can also grow Japanese maple from seeds, however, you should be aware that they will not grow true to their cultivar. Cuttings are also difficult – the best way to propagate a named cultivar is by layering, in either spring or autumn.

Japanese maples are generally hardy and do not have too many common problems or pests. They can be susceptible to stem canker and root rot if their soil is poorly drained.

The foliage is prone to leaf scorch and browning during periods of hot, dry weather, or if exposed to too much sunlight. Most cultivars prefer shade, or a little sun, in the case of red and purple-leafed varieties. Windy conditions can also cause leaf scorch, so it’s best to find your tree a sheltered spot.

Another cause of leaves turning yellow could be Chlorosis, which occurs due to a lack of chlorophyll in a high pH soil. If you suspect this is happening, try re-potting your plant into a container with soil of neutral pH.

If the leaves discolour and then shrivel and die, your tree might be suffering from Verticillium Wilt, caused by a fungus in the soil. This disease is capable of killing branches on your Japanese maple, turning them brown and mushy inside. In this case, you must remove the branch as soon as possible.

As for pests, Japanese maple can be vulnerable to scale insect infestations, which feed on its sap, weakening the tree. Look for scales left by the insects on the underside of leaves, as well as sticky, honeydew residue that they secrete on the foliage. To remove them, you can try washing the tree with soapy water.

If you’re growing your Japanese maple in a container, you should also keep an eye out for signs of vine weevil larvae, which usually feast on the plant’s roots from summer to spring, and can cause wilting, or even the death of the plant.

Look for signs of the 1cm long grubs near the roots of the tree, and remove any visible grubs and adult vine weevils (beetles). In extreme cases, a method of biological control may be employed, or an insecticide applied at the end of summer.

What is the best soil for a Japanese maple in a container?

Japanese maples will grow in most soil types; however, they favour a humus-rich soil with lots of organic matter. If growing in a container, choose a rich garden compost, such as that available from most garden centres. John Innes No.2 is a good example.

Add a fertiliser or liquid plant food to the soil once a year, in spring. Keep the soil moist, but not soaking, and make sure the container has good drainage, to prevent it from getting waterlogged.

Can a Japanese maple be trimmed?

Japanese maple does not usually require trimming to grow into a pretty shape. However, you may decide you need to trim it to remove winter dieback, thin it out, or prevent it from growing somewhere it shouldn’t.

In this case, the best time to do so is from November to January, when the tree is in its winter dormancy period. This will prevent it from leaking sap, which can weaken the tree.

Trim any dead ends of the shoots, and if you need to trim branches, trace the branch back to a side branch, and make the cut at that point. Trim flush to the branch, as leaving a stump can encourage rot.

Should my Japanese maple be given full sun or shade?

Most cultivars of Japanese maple prefer dappled shade. There are some exceptions – cultivars with bright red and purple leaves need access to some sun in order to develop their deep colouring. Poor autumn colouring can also be a sign your tree is not getting enough sunlight. Make sure to research what your chosen cultivar needs before planting.

When should you plant a Japanese maple?

The best time to plant a Japanese maple is during the winter months, from October to March. This allows the roots of the plant to become established whilst the tree is in its winter dormancy period.

If you’re growing it in a container, your Japanese maple will need to be re-potted every 2 years. The best time to do this is either side of summer, in April or September.

What should I do if my Japanese maple’s bark starts splitting?

Bark splitting is a fairly common problem for Japanese maples, as they have thin bark. Splitting can be caused by animals, or by unfavourable environmental conditions – for example, overexposure to sunlight, cold winds, or cold temperatures in late spring, after the tree has begun expanding for the growing season.

If your Japanese maple’s bark starts splitting, you should firstly prune away any damaged bark on its branches. If your tree is healthy, it will hopefully recover by itself, in time. If not, you should consult an arborist for professional advice on how to proceed.

To help prevent bark splitting, try to plant your Japanese maple in a sheltered spot, and keep it sufficiently watered and mulched, especially during dry periods.