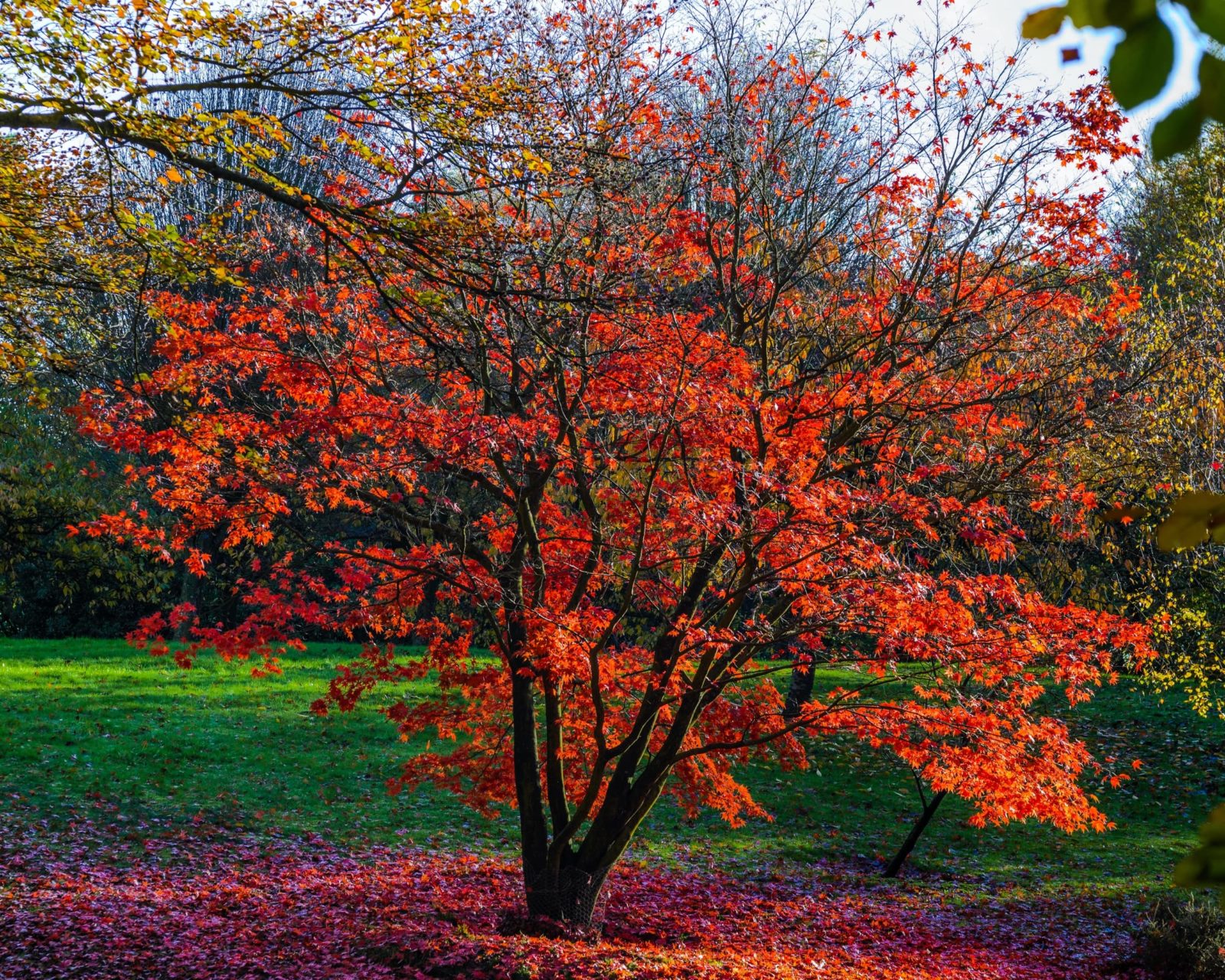 Acers are a genus of trees and shrubs commonly referred to as maples and a number of the 128 species within this group can be successfully grown in the UK. [source]

Many Acer species are popular as ornamental trees – prized in particular for their autumn colour.

They make popular specimen trees in many gardens, but the problem is, there are literally thousands of different cultivars to choose from.

In this article, we explore some of the best options for UK gardeners to consider.

Acers can be both trees and shrubs, and can vary significantly in shape, size, colour, form and habits.

Read on for suggestions of some Acers that might be right for you and your garden:

The UK’s only maple that is native to these shores, the field maple can be an excellent garden tree.

It is commonly chosen as a garden tree or a tree for city parks because of its compact growth habit, its tolerance of atmospheric pollution and, of course, its stunning autumn foliage.

One of the reasons why it is a good idea to consider a native maple is that as a native plant, it offers a lot more to native wildlife.

The field maple is attractive to aphids, which means that it also benefits their predators such as ladybirds, hover-flies and birds.

Many species of moths also benefit from the tree, and feed on its leaves.

The flowers provide nectar for pollinators such as bees, and birds and small mammals eat the fruits.

The field maple can grow in most fertile but well-drained soil types, in full sun or partial shade.

It can cope with a range of less than optimal conditions and may form as a shrub in chalky soils.

As well as being a specimen tree, the field maple can also be coppiced, or used as a hedgerow plant.

The most abundant native tree in the northeastern United States, the red maple can also be grown in the UK. [source]

It is incredibly adaptable to soil type and conditions, and can cope well in full sun or partial shade.

Of course, this is a stunning ornamental tree.

As the name suggests, the leaves turn bright red in autumn – these autumnal displays will be most vivid when the red maples are planted in acidic soils.

Acer rubrum can be good for city planting because they are fairly tolerant of air pollution.

However, the trees have low, invasive root systems which can cause damage to paving etc.

And it is also important to note that this tree can restrict the growth of a number of other plants when they are grown close by.

Since this is an acer that grows into full-sized trees up to 30m in height, this is not necessarily the best choice for smaller or more restricted spaces.

However, where the space is available, these can be truly stunning specimen trees.

A number of cultivars make excellent bonsai, and can even be grown in containers.

Some red maple cultivars to consider in the UK are:

Open habit with branches 45-degree angle to the trunk forming an attractive oval crown. Its colour is not as intense as other cultivars.

The sugar maple is another North American native Acer that can also be grown successfully in some southern parts of the UK.

In addition to being known for its brightly coloured autumn foliage, the sugar maple is of course also known for being the primary source of maple syrup.

Unfortunately, the seasons and climate conditions here in the UK mean that the potential for worthwhile sap production and harvesting is negligible – but that does not mean that you cannot still consider growing these attractive trees.

These are large, deciduous trees that will grow up to 20m tall, with dense oval or rounded crowns, and five-lobed leaves that turn yellow, orange and reddish in the autumn.

These trees can be grown as specimen trees in full sun or shade, in moist but well-drained soil.

Though it can be a useful specimen tree in Cornwall and other warm and protected southern gardens, it should be noted that this too is a bad companion plant, and may inhibit the growth of a range of other plants grown close by.

Another very vigorous deciduous tree, the silver maple should not be confused with the similarly named species above.

It will grow to more than 12m in height and be wider than 8m once fully grown.

It will not be the best choice for smaller gardens, as it has invasive roots that can do damage to pipes or structures.

It can also have allelopathic (growth slowing) effects on nearby plants.

It is also worthwhile noting that this is a comparatively short-lived tree – it will typically live between 125 and 140 years.

Like other acers mentioned above, however, this is another maple species that can provide amazing autumn colour in a large, sheltered garden.

It can do well in many different soil types as long as the soil is moist but well-drained.

The shallow root system can also be useful for use in erosion control in certain situations.

The Norway maple was introduced to the UK in the 17th Century. [source]

Though not a native plant, this is another tree that can be beneficial for wildlife in a UK garden.

The leaves are eaten by a range of caterpillars and a number of birds and small mammals eat its seeds.

This is a broadleaf tree that can grow to an eventual height of around 25m.

Leaves will fade to yellow and occasionally to ruddy brownish red before they fall in the autumn.

In spring, conspicuous clusters of yellow flowers form on the bare branches.

This plant will grow in Britain in all but the very poorest of soils, so it can be an interesting specimen tree to consider for many gardens.

However, it is worth noting that like many maples, this tree can also have a detrimental effect on certain other plants grown close by.

Not to be confused with the similar species above, the sycamore maple, commonly called simply ‘sycamore’ in the British isles is another option to consider.

It is believed that the sycamore may have been originally introduced to our shores by the Romans, or in the 1500s. [source]

It is believed to have naturalised from around the mid-1800s.

This broadleaf tree can grow up to 35m high, and live for 400 years or so – meaning it is important to be careful where it is planted.

The ‘helicopter’ seeds spread this tree quickly and it has colonised native woodlands to the detriment of native species.

However, it can be an option to consider in larger gardens, where, like other native and naturalised maples, it has benefits for a wide range of garden wildlife.

It may be particularly beneficial as part of a wild break or shelterbelt.

Another tree to consider for certain UK gardens is the paperbark maple.

It is a small, spreading tree which is deciduous, with leaves that turn a brilliant orange and red in autumn.

The tree is also known for its attractive peeling and paper-like bark, which has a lovely rich chestnut-brown colour.

The tree can reach an eventual height of 8-12 metres and can be a good choice for a small specimen tree in many gardens.

It can grow successfully in a range of soil types and in full sun or partial shade, so it is common to find it in borders, or front gardens.

If you are looking for a smaller tree or shrub, then acer palmatum (a type of Japanese acer) is a species that provides a huge array of cultivar options.

These Asian acers are all extremely popular for their astounding colours and attractive, compact forms.

There are cultivars that have a huge range of different colours in their foliage, and there is also variety in leaf form and growth habit.

It is often believed that Japanese maples are acid-loving trees and need ericaceous soil or compost to grow well.

In fact, they will tend to grow pretty well regardless of the pH, as long as there is sufficient moisture and oxygen for the roots.

Waterlogging and compacted soil are ‘no-nos’ for these plants, but other than that they are surprisingly un-fussy.

In terms of sun, they can thrive in full sun or dappled or partial shade.

They will do best in more sheltered sites but can also cope with some wind exposure.

Some Acer palmatum cultivars to consider are:

Though there are plenty of other beautiful options within this type of Acer to consider.

Other Japanese maples not in the group mentioned above include those in the Acer japonicum species.

These Acers are also known as Amur maples, or fullmoon maples.

These are small, deciduous trees which very rarely grow above around 10m tall, and are often much smaller.

Though less commonly cultivated as ornamental plants than Acer palmatum, these can also make interesting additions to a UK garden.

Two cultivars of Acer Japonicum that have received the Horticultural Society’s Award of Garden Merit are:

So one of these could also be worthwhile considering.

Finally, one other more unusual Acer to consider for your garden is the snake bark maple.

This is a small, spreading tree that can grow up to around 10m in height.

It has triangular, mid-green leaves that turn yellow or orange in the autumn.

As the name suggests, these Acers are also characterised by their bark, which does have winding patterns on it that look a little like snakes.

So, which Acers will be right for your garden?

The above should have given you a great place to start when making the right choices for your space.