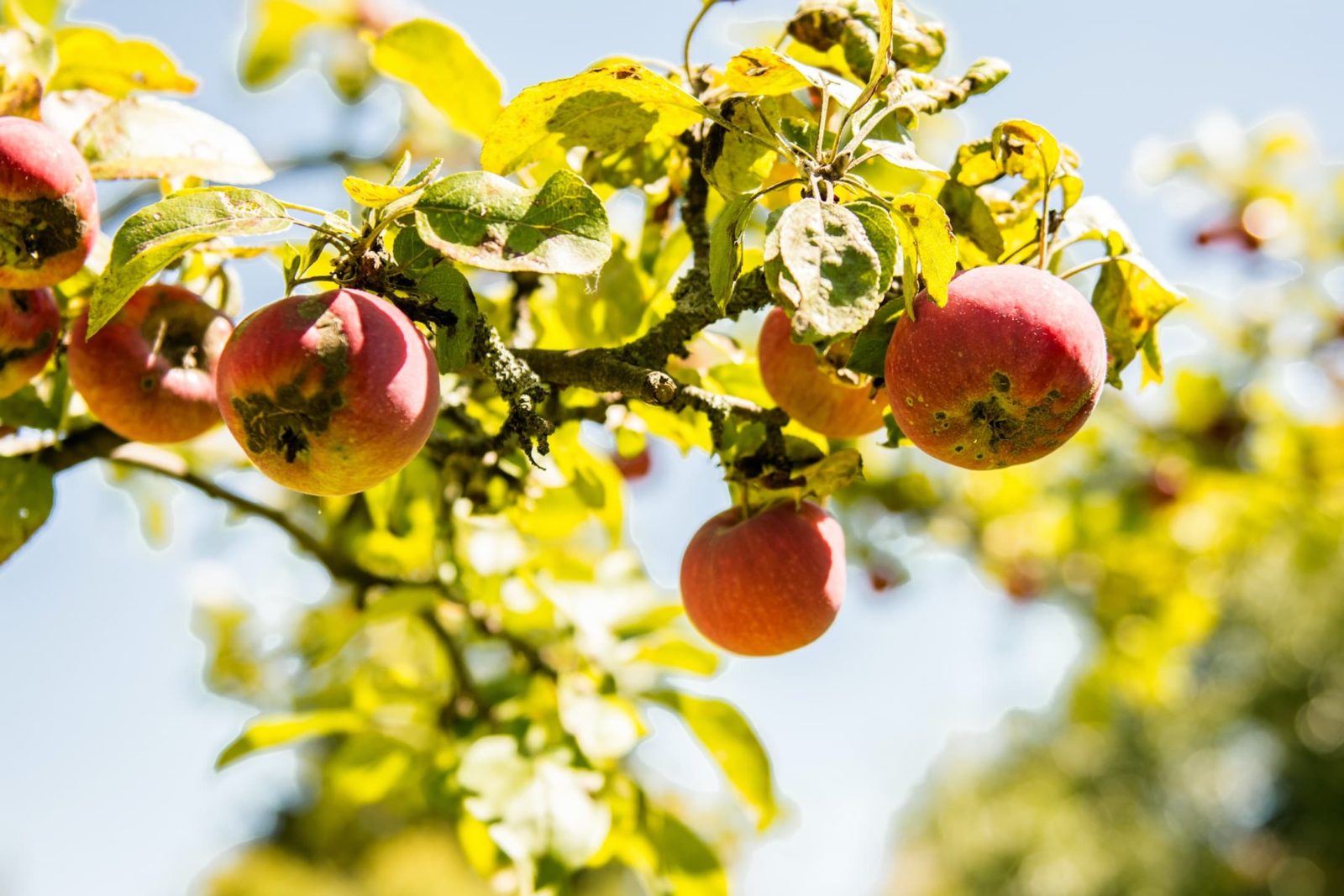 Do you have a problem with your apple tree? This article may reveal the cause of the issue.

Apple trees are generally relatively easy and straightforward to grow, and can deliver a high yield of delicious fruits once established.

However, apple trees can be affected by a range of common problems and diseases.

In this article, we will introduce you to some of the most common issues that you may encounter:

Sometimes, environmental issues may be to blame.

Unproductive apple trees may have experienced:

However, it is also important to note that an apple tree may not be fruiting simply because it is still young.

When Should An Apple Tree Begin Bearing Fruit?

It is common for apple trees to take a few years to begin producing well.

How long it will take depends on a range of factors, including the cultivar and the rootstock that has been used.

It may also be the case that the apple tree is biennial bearing. [source]

With certain apple tree varieties, you may find that the fruiting pattern is one year of excellent yield, followed by a year with sparser fruit formation.

This is more common with certain apple varieties than it is with others.

This pattern may be initiated by one of the issues mentioned above, and can be addressed by removing some of the blossoms or fruiting buds to encourage a more moderate yield in a bumper year.

Poor growing conditions may sometimes be out of your hands, but can also be due to your own mistakes.

Rule out issues such as over or under watering, and make sure you have positioned your apple tree in a suitable spot before looking for other causes of any issues.

Pruning wrongly can also cause issues, so this is something else to consider when troubleshooting apple tree problems.

Unfortunately, apple trees can also be affected by a number of diseases. Here are some of the most common ones to look out for:

Apple scab is caused by a fungus, Venturia inaequalis. This is spread by airborne spores and overwinters in leaf litter. [source]

If your tree is infected with apple scab, signs can be observed between mid-spring and leaf-fall in autumn.

You may see olive-green spots or blotches on the leaves, which are velvety as they release spores, and then darken over time. Leaves may also drop prematurely.

Blistering and cracking may be seen on twigs and brown or black scabby blotches may also emerge on the fruits.

Fortunately, mild attacks should only blemish the skin and you can still eat the apples. However, damaged fruits will not store as well.

While difficult to eradicate entirely, apple scab reoccurrence can be reduced by disposing of infected twigs and leaves promptly to reduce the amount of fungus around to begin infections.

Yields will not usually be significantly reduced provided infected materials are removed promptly.

If this is a recurrent problem, more resistant cultivars are available. [source]

Blossom wilt is another fungal infection which can cause rotting of the blossom and fruiting spurs.

On apple trees, the fungus which is usually responsible for this is M. laxa f. sp. Mali.

Though other M. laxa and the indistinguishable to the naked eye M. fructigena can also be to blame.

At flowering time, in the spring, you may see brown and shrivelled blossoms and leaves on the fruiting spurs.

Again, make sure you remove all affected material promptly to reduce its spread. Also, again, some cultivars are more resistant to this issue than others.

Brown rot, as the name suggests, is characterised by brown rotting on the fruit.

This is actually caused by the same fungi as blossom wilt – M. laxa or M. fructigena. [source]

You will see brown rot on the fruits, typically spreading out from wounds which may have been caused by apple scab infection, or been made by birds or other wildlife.

Infection will spread between fruits in clusters, and the fruit which has been infected may fall, or it may cling to the tree – hanging on in a mummified state.

Do not allow rotted fruit to remain on the tree and remove and dispose of all the infected apples as soon as possible, to reduce the spread of this fungal problem.

Honey fungus is a fungal infection (caused by a number of species of Armillaria fungus) which attacks and kills the roots of many trees, shrubs and perennial plants.

Apple trees are, unfortunately, one of the species which can be susceptible.

Sadly, this is a serious problem and root damage can kill the tree.

The branches may die off in sections over several years, or die back suddenly all at once – often during a hot dry period.

You may see cracking of the bark at the base of the trunk, and if you peel back the bark you will see white mycelium.

In wet conditions, fruiting fungal bodies (honey-coloured mushrooms) may appear around the base of the tree.

Preventing the spread of this dangerous plant pathogen is notoriously difficult.

Often, in areas with an infection, getting rid of all infected plants and choosing new plants which are resistant to honey fungus is usually the best option.

Another serious fungal infection that can attack the roots of an apple tree is phytophthora root rot.

After honey fungus, this is the most common cause of root and trunk base decay in apple trees.

There are a number of different fungus-like organisms which can be responsible. [source]

These organisms can survive in the soil for many years, and are especially associated with disease in heavy and/or waterlogged soils.

Unfortunately, it is unlikely that you will spot this issue until serious root damage and die-back has already occurred.

It can be very difficult to distinguish between this issue, honey fungus, and waterlogging alone.

Making sure the soil has good drainage will significantly reduce the chances of this disease taking hold.

As with honey fungus, you will have to get rid of the tree (and any other impacted plants), remove as much topsoil as possible, and replant with less impacted, more resistant species.

Apple canker is another fungal problem. It is caused by the fungus Neonectria ditissima.

It attacks the bark of apple trees, causing a sunken area where the bark has died back and, eventually, the death of the infected branch.

New cankers can form from the middle of spring and then will be present throughout the year.

The canker will often start at a bud, or a wound on the tree.

Wounds caused by apple scab, frosts or winter damage, or even damage caused by pests like aphids can all be routes for infection.

Cankers are typically more serious on wet and heavy, and/or acidic soils, so making sure that drainage is good and reducing pH with liming if necessary can help reduce the likelihood of this issue taking hold.

If you spot apple canker, you need to act quickly to cut out infected areas. [source]

Make sure that you cut back to fresh, green wood.

It is also a good idea to paint a wound sealant or wound paint onto the area, to prevent reinfection from occurring.

Another fungal infection which can affect apple trees is coral spot.

This disease, caused by Nectria cinnebarina, causes dieback of branches.

However, this is only a weak pathogen in its own right, so the presence of this fungal infection usually indicates that there are other underlying issues.

This fungal infection is easily identifiable by small coral-pink pustules which can be seen on infected branches.

Prune out infections promptly, cutting back to healthy wood in dry weather conditions.

If the plant has repeated attacks, look for other things that may be weakening your apple tree.

These are of course just some of the common issues which can pose problems for an apple tree.

There are other problems and diseases to consider – however, ruling out all of the above will certainly help you move closer to working out what is wrong, even if you have not found the exact issue.