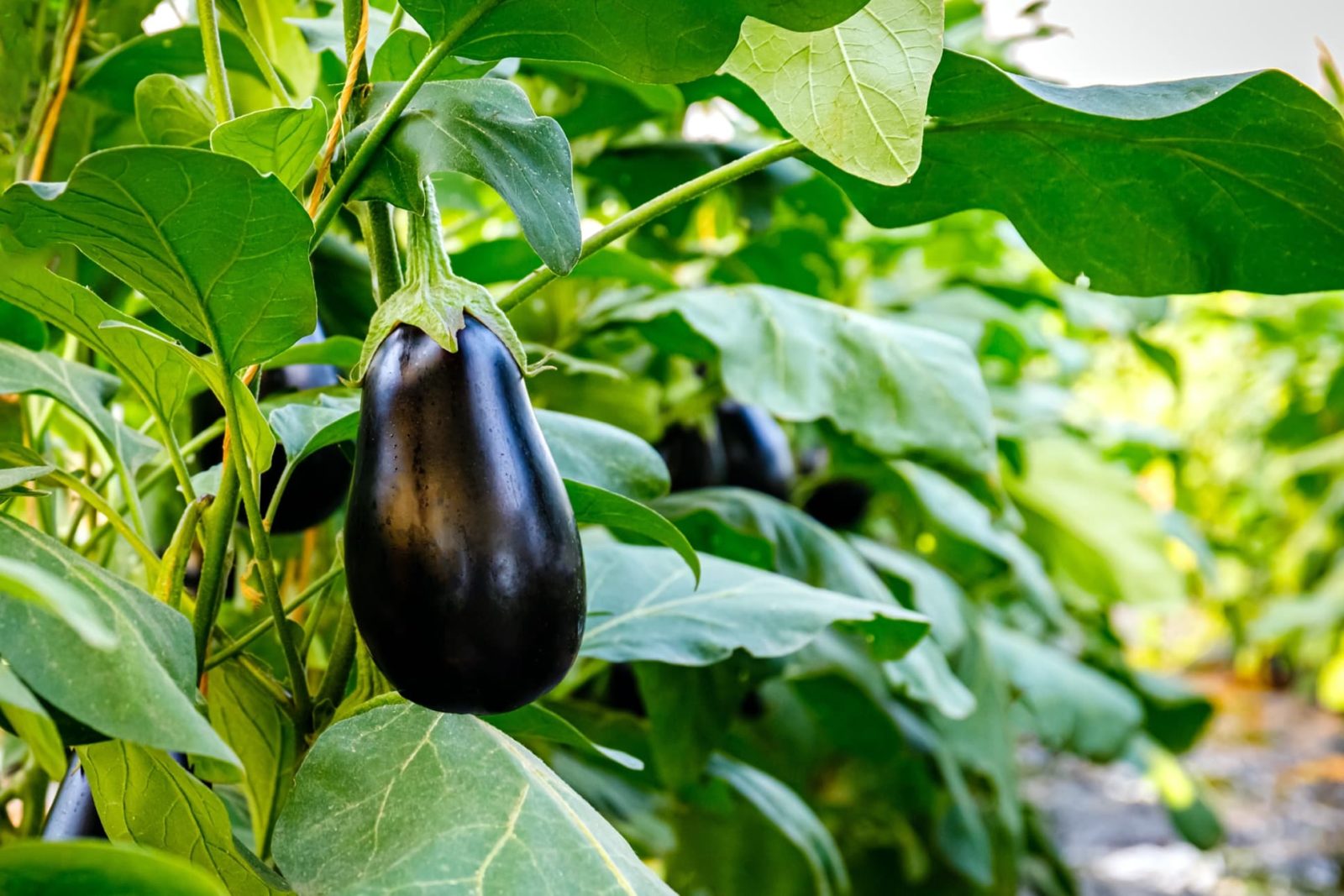 Aubergines are a delicious fruit – but are not widely grown here in the UK – which is a shame, as aubergines are simple to grow, tasty to eat and can be cooked in all manner of ways.

Often thought of and used as a vegetable, aubergines are actually a fruit. Even though not especially difficult to grow, aubergines do have specific requirements in order to mature and produce a good-sized harvest, before autumn arrives.

This guide will cover the aubergine’s origins, how to grow and care for it, any pests or diseases you may encounter when growing it and most importantly how to eat it.

Aubergines, or ‘Solanum melongena’ as they are botanically named, are also widely known as ‘eggplant’. From the Solanaceae, or nightshade family this genera also includes, tomatoes, peppers and potatoes.

It is thought that aubergines originate from India, Sri Lanka and Africa and hence their need for a warm and sunny environment to grow best. Aubergines are grown throughout the world and are one of the most important commercially grown crops in Asia.

Aubergines are often grown as a perennial plant in warmer climates, however here in the UK they are grown as an annual, with a long growing season and are most common as the oval purple fruit we all know it as.

They are nonetheless, also available to buy from seed in all manner of different shapes and colours, from long or curly to white or striped fruits.

Varieties available as seed in the UK include:

All these varieties have been given the Award of Garden Merit (AGM) by the Royal Horticultural Society (RHS) which indicates that they perform reliably well in the garden.

How to grow aubergines

Aubergines grow best in a rich and fertile soil which is moisture retentive and need the longest growing season we can give them in the UK.

Requiring warm and sunny conditions they are happiest in a greenhouse or conservatory, although can be moved outside to a south-facing position in the height of the summer.

In order to give them time to grow and finally fruit at the end of the summer, aubergines are started off from seed as early as January.

A spot above a radiator or a warm window sill will often work just as well though.

Aubergine seed can be sown in modules or small 9cm pots filled with seed sowing compost and very lightly covered with vermiculite or compost.

Keep moist and once germinated make sure the seedlings receive as much light as possible, as this will help prevent them from becoming leggy.

Once the seedlings have produced their first set of true leaves, they can be carefully pricked out. Make sure to hold them by their leaves and not the stem and pot on individually using peat-free multi-purpose compost.

Unlike tomatoes, aubergines do not like to be planted deeply as they will rot.

Grow on and repot as necessary until the weather allows them to be moved to their final position. However, aubergine plants must not be moved to an unheated greenhouse until all risk of frost has passed, usually in May or June depending on what part of the UK you are in.

If a greenhouse is not an option, then aubergines can be planted and grown directly into the ground, but only in the warmest parts of the country.

If planting outside, make sure their final position is the sunniest and warmest you can provide, that any risk of frost has definitely passed and that the soil has warmed up.

As the plants grow, keep watering and when the plants are 30cm tall the tip of the main stem can be pinched out to promote a bushy habit.

Once the first fruits start to appear, feed every fortnight with a high potassium fertiliser, such as tomato feed.

For most varieties allow six or so fruits to develop before removing any further flowers, unless you are growing a smaller fruiting variety which can be allowed to develop more.

Staking and tying in may be required, especially for taller varieties and as the fruits develop.

Aubergines require a sunny, warm and ideally humid environment, which is why they do so well in a greenhouse here in the UK.

Their final growing position can either be directly in the ground, in containers or even grow bags, but if outside, a south or west-facing spot is necessary.

If planting outside and having already been hardened off, the plants can be spaced 60 – 90cm apart to allow room to grow and good air circulation.

If growing in pots then a final pot size of 25 – 30cm will be sufficient, or if using grow bags, 3 plants per standard size bag is the maximum.

Aubergines take around 6 months from germination until the fruits are ready to harvest, usually from August onwards.

They are ready to harvest once they have reached their final colour and are covered with a glossy skin.

Harvest each fruit by cutting the stem as soon as they are ready – if left too long their taste decreases rapidly and may become bitter.

Aubergines can be stored in the fridge for a few days, but taste so much better if eaten straight after picking.

Uncooked aubergines can taste bitter, which is why they are most often cooked before eating, developing a delicious creamy texture.

Aubergines can be cooked a number of different ways from stuffing and baking to adding to curries and even barbequing.

Used all around the world in various regional dishes, they are perhaps best well known for their inclusion in moussaka, ratatouille and baba ganoush.

Greenfly or aphids can be particularly attracted to aubergine plants, leading to poor growth and harvests.

They will often leave behind a sticky honeydew substance on the plant and will usually be accompanied by ants. Aphids are large enough to be spotted with a naked eye.

Control measures can include squishing by hand where numbers are small and encouraging predators such as ladybirds and hoverflies. But for more significant numbers, organic and insecticidal sprays can be considered.

Red spider mites are most common in warm and dry conditions such as greenhouses and can prove difficult to control.

Preying on a number of plants, including aubergines, they suck the sap – leading to mottling of the leaves, leaf drop and even eventual demise of the plant.

The mites are not always red as their name would suggest, but a green/yellow and sometimes become red in the autumn.

The mites are incredibly small and are not easily seen by the naked eye. On close inspection, they can most often be found on the underside of the leaves, along with their eggs.

If possible, any plants infested with red spider mite should be removed from others nearby as quickly as possible and destroyed.

The mites prefer a dry environment and so increasing humidity by misting or dampening down the greenhouse is a preventative action, but will sadly not control them once present.

Once red spider mite is established controls can include biological and pesticide approaches, with biologicals now being the preferred option.

Blossom end rot is not a pest or disease, but is caused by certain growing conditions and can affect aubergines as well as tomatoes and peppers.

Caused by a lack of calcium, dark patches appear at the end of the fruits varying in size from a small blotch to a rather worrying inch or more.

Compost, grow bags and soil more often than not have more than enough calcium for plants to grow.

However, it is the plant struggling to transport the calcium to the far ends of the fruit that leads to blossom end rot, most often caused by erratic or under watering and high temperatures.

The best method of control in the case of blossom end rot is prevention, as sprays are ineffective.

The soil should always be kept moist and not allowed to dry out, which may mean watering twice daily in a hot greenhouse during the height of summer.

Feeding fortnightly may help prevent it, along with mulching the soil to help conserve moisture.

Depending when it strikes, already ripened fruit can still be eaten with the affected area cut out. However, if blossom end rot appears on unripe fruit the fruit is unlikely to ripen any further.