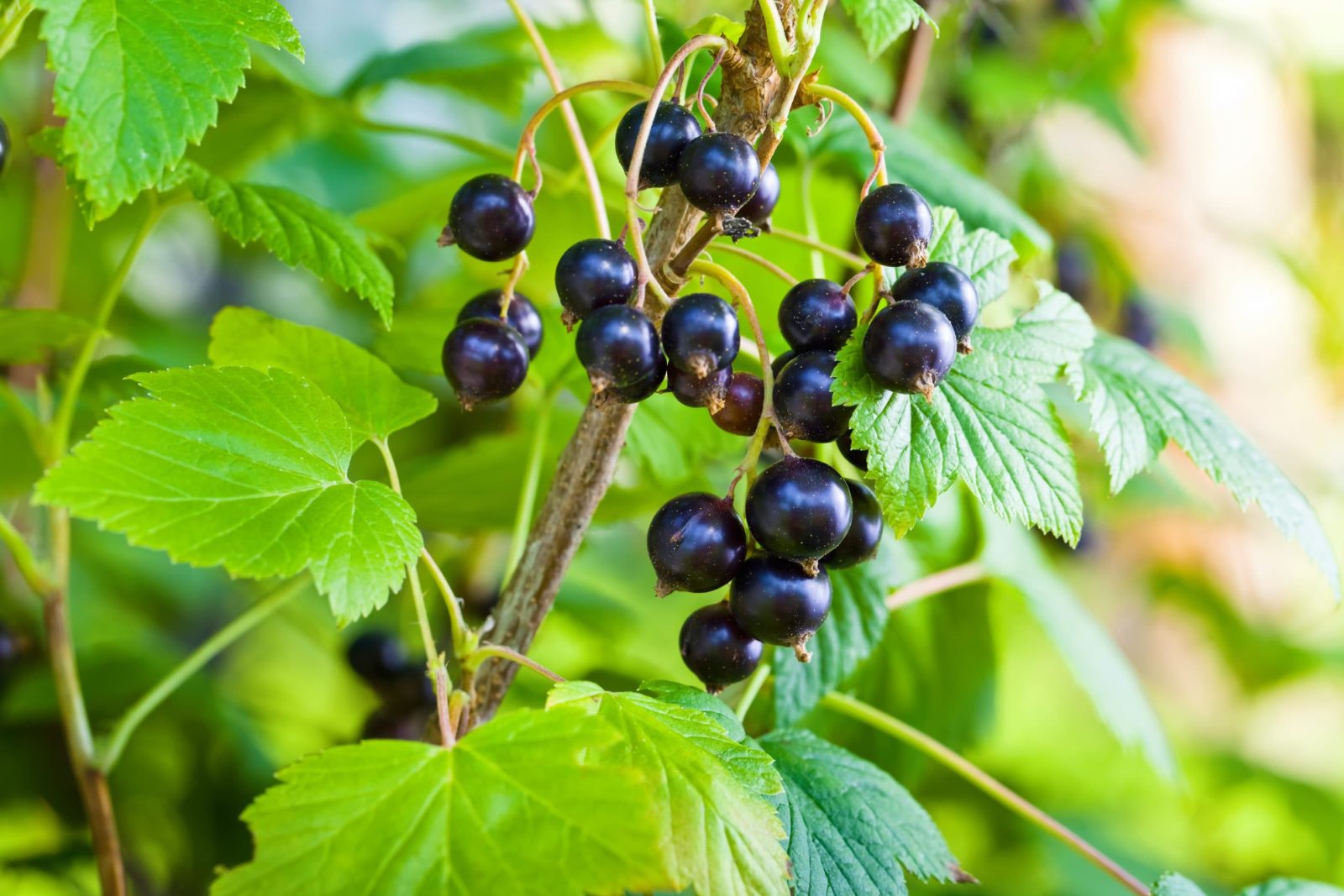 Blackcurrant bushes make a tasty addition to your garden, producing reams of deliciously sharp berries in the height of summer.

Blackcurrants can be enjoyed on their own, or made into delicious jams or juices. As well as the famous berries, blackcurrant plants also produce aromatic foliage and small flowers which will attract pollinators into your garden.

This woody shrub is native to northern Europe, and therefore fully hardy and easy to grow in the UK climate. If you’re short on space, some of the more compact cultivars can also be grown in containers.

There’s really no drawback to adding this fruity little number to your garden, so read on for our full care and growing guide, for everything you need to know about successfully growing blackcurrants. Now all you need is a good recipe for blackcurrant crumble!

The Ribes nigrum plant, better known as blackcurrant, is part of the Grossulariaceae family. It is native to northern and central Europe, and northern Asia, and has been cultivated in Russia since the 11th century, and in Europe since the late 17th century. Today, blackcurrants are grown commercially in many parts of the world, including eastern Europe and New Zealand.

The blackcurrant bush is a medium-sized, woody shrub, with broad, aromatic leaves of approximately 4 cm, and racemes of small flowers. Flowers appear in spring and are followed by dark purple berries in mid-summer. Most established blackcurrant plants reach an approximate size of 2 metres in height, and 1.5 metres in spread.

There are many cultivars available, each showcasing different sizes, flavours and flowering times. Some popular cultivars include ‘Ben Connan’, which flowers early, and produces lots of large berries. ‘Big Ben’ is a good all-rounder, with easy to pick fruit, whilst ‘Ben Hope’ is hardy in unfavourable growing conditions.

‘Ben Sarek’ is a compact variety, suited to small gardens and container growth, and ‘Ben Tirran’ flowers late, which is great if you prefer to pick your berries in late summer. Many of the modern cultivars were developed in Europe in the 20th century, with the intention to resist disease and improve yields.

The leaves, bark and roots of the blackcurrant plant have been used for centuries in traditional herbal remedies, whilst the tart berries are a popular choice for flavouring jams, desserts, juices and cordials (Ribena, anyone?) The berries can also be used to produce blue and purple dyes, and blackcurrant seed oil is a common ingredient in cosmetics.

Blackcurrant bushes prefer a position with full sun if possible, although they will tolerate partial shade – try to find an east, west or south-facing spot for them in your garden. Although the plant is hardy, it prefers to be in a sheltered location, away from cold winds.

Plant young blackcurrant bushes from October to March, avoiding the middle of winter when the ground is frozen. Add garden compost to the soil upon planting, to get your plant off to the best start.

As far as soil is concerned, blackcurrant will tolerate most types, but its preference is for fertile soil, and this has to be kept moist, but fairly well-drained. It will require watering during hot summers, or during periods of dry weather – although be careful not to overwater it.

The plant flowers in spring, so you can add a general well-balanced fertiliser in late winter, to help it out, along with a layer of mulch, to assist the soil in retaining moisture and repressing weeds.

Blackcurrant plants should be pruned annually, as well as upon planting, to encourage plenty of new shoots for berries to grow on. The best time to prune a young bush is in autumn or winter.

If the plant is growing well, you can get away with simply removing any weak or damaged shoots. However, if your blackcurrant bush is not proving fruitful, you will need to prune it back hard, to stimulate more growth. In this case, aim to trim at least half of the shoots back to ground level.

For more established plants, you can conduct a light pruning at the time of berry picking. The main pruning should still take place in winter, when you can remove any dead or unproductive wood and weak shoots.

If you’ve got an old blackcurrant bush that’s growing out of hand, prune it back hard, reducing the majority of branches to ground level, and leaving just a few young branches. The plant should recover well, in time.

When To Plant Blackcurrants

The best time to plant blackcurrants is in late autumn or early spring – October and November, or March. Try to avoid planting in mid-winter when the ground is frozen. Multiple plants should be spaced 1 – 1.5 metres apart, depending on the variety. It is advisable to purchase young bushes of around 2 years in age.

To plant a young bush, you should first clear the soil of weeds, and mix a garden compost into the top layer. Dig a hole twice as big as the root ball, and firm the plant in well. Bare root and container-grown plants should be planted 2 cm deeper than previously, to encourage new shoots to grow from the base.

If it’s a young plant and you’re planting in winter, you should also prune it back hard upon planting, to around 3 cm above soil level, to further encourage new growth. Although this will prevent fruit production in the first year, it will help the plant in the long term.

The natural habitat of blackcurrant is northern and central Europe and northern Asia. Thanks to its relatively cold natural habitat, the plant is hardy and can tolerate low temperatures – in fact, it requires a period of chilling in order to produce new growth in spring.

The ideal growing conditions of the blackcurrant plant are a sunny or partially shaded spot, with moderate temperatures and moist, fertile soil. It likes to be sheltered from cold winds, and it is not drought tolerant.

The best way to propagate blackcurrant bushes is by taking hardwood cuttings from mid-autumn to late winter, avoiding hard frosts. Hardwood cuttings can take a while to take root but are generally successful in creating new plants.

Take cuttings from young, healthy shoots from the current season. Cut lengths of 20 – 30 cm, making the cut just below a bud at the base. Dip the bottom of the cutting into a rooting hormone, and then plant it straight away into a container, or outside into a pre-prepared trench.

If planting outside, make sure to choose a sheltered area, and use a garden compost dug into the soil. Plant the cuttings with two-thirds of the material in the soil, and add sand at the base. Keep the soil moist, and leave them to root until the following autumn.

Unfortunately, there are a few pests common to blackcurrant bushes. One of these is blackcurrant gall midge, which affects the foliage of the blackcurrant bush in spring and summer. The larvae of these tiny, yellow-brown flies feed on the leaves, causing them to become distorted. Light infestations can be tolerated, and some cultivars, such as ‘Ben Hope’, are resistant.

Another pest to watch out for is blackcurrant big bud mite. These strike earlier, usually in late winter. They are microscopic bugs that suck the sap from embryonic leaves, causing buds to swell. Infested buds will usually not flower or produce foliage – remove infected buds as soon as you notice them.

Currant blister aphid is another pest that can cause distorted, blistered and discoloured leaves, often turning them red or yellow. Infestations are most common from April to June. The plant can usually tolerate them, and it will not affect vigour or crop yield.

Blackcurrants are also vulnerable to gooseberry mildew, which can cause white, powdery mildew to develop on foliage and fruit during summer, which turns brown in time. Good ventilation is key to preventing this, so try to keep plants well-spaced, and thin them out by pruning. Remove the ends of any affected material as soon as possible.

Birds are another consideration, as they like to eat most parts of the plant. Make sure to pick berries as soon as they are ripe, or else birds will take them all! If you can’t beat them to it, you might need to cover your plant with netting.

Berries can be damaged by too much direct sun in hot periods, causing them to develop orange patches. Conversely, cold areas and late frosts can damage spring flowers – try to prevent this by choosing a sheltered spot in the garden for your blackcurrant bush.

Can you freeze blackcurrants?

It is perfectly fine to freeze blackcurrants – in fact, this is what you should do if you don’t plan on eating them within a few days, to prevent them spoiling. Simply pop them in the freezer in a tub or bag. You can use frozen blackcurrants to make jams or puddings.

When should I pick blackcurrants?

You should pick blackcurrants as soon as the berries appear black and ripe. This will usually happen in July, but depending on the cultivar, can also occur anytime from late June through to August.

To pick blackcurrants, you can either pick the berries individually, or in the case of modern cultivars such as ‘Ben Sarek’ and ‘Ben Hope’, you can cut off the berries in bunches, as soon as they’re ready.

If blackcurrants are being grown commercially, they will usually be picked by machine, using a straddle harvester, which shakes the branches and strips the fruit from the shoots.

How big do blackcurrant bushes grow?

Depending on the variety, blackcurrant bushes will grow to around 2 metres in height, and 1.5 metres in spread. There are some smaller cultivars available, such as ‘Ben Gairn’ and ‘Ben Sarek’, which should only grow to around 1 metre – these are the varieties most suited to smaller gardens and containers.

Can I prune blackcurrants in March?

It is recommended to prune blackcurrants during winter, from October to March, when the plant is dormant. Pruning in March will be fine, although you should not leave it later than this. Aim to remove only old wood, so as not to prevent flowering on younger shoots.

Is blackcurrant a citrus fruit?

Blackcurrant is not a citrus fruit. Citrus plants are members of the Rutaceae family and produce fruits such as oranges, lemons, limes and grapefruit. However, blackcurrants do contain citric acid in the same way as citrus fruits.

Can blackcurrant be grown in a container?

Most blackcurrant plants do not do well in containers, due to their expansive size. However, there are some smaller, modern varieties that can be grown successfully in containers. These include ‘Ben Gairn’ and ‘Ben Sarek’.

If you’re growing blackcurrant in this way, choose a large container filled with a soil-based compost, and feed your plant a liquid fertiliser every summer. The plant will need to be re-potted approximately every 3 years, in late winter, at which time you should trim the roots, and replace it in fresh compost.