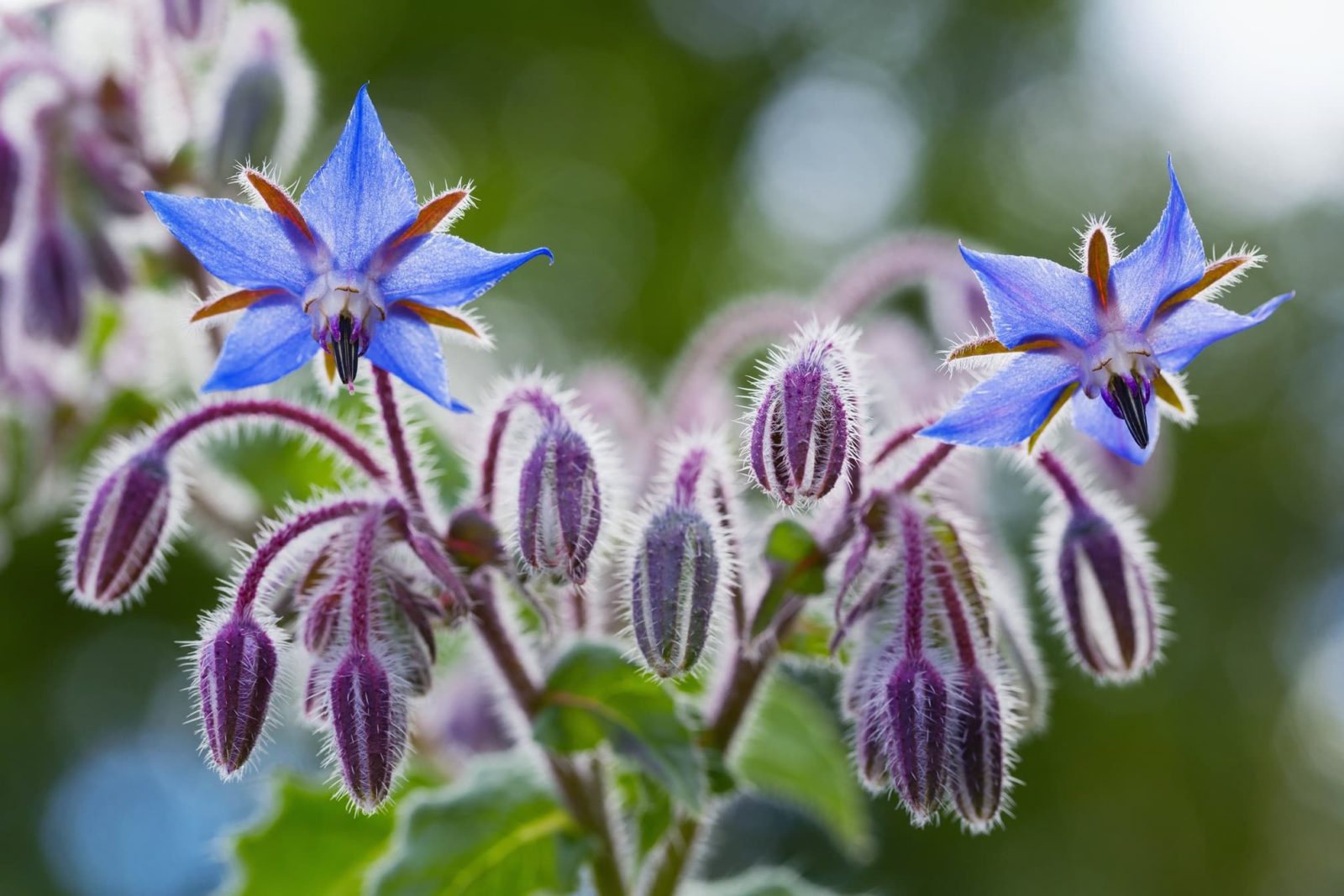 As an attractive border plant, enticer of pollinators and herb for salads and beverages, borage is a versatile and vibrant addition to any garden.

Also known as bugloss or starflower, borage is a hardy herb that’s easy to grow, great for encouraging biodiversity and attractive for its colourful blossoms.

Most varieties are annuals, meaning they’ll complete their entire life cycle within a single season, but there is a perennial version of borage that also yields good results in a backyard display.

It’s a huge favourite among the bees and butterflies, making it a great choice to plant in among other herbs, fruits and veggies since it will enhance the chances of pollination.

Although it’s not as famous or as commonplace as other herbs like basil, mint and thyme, borage is a superb culinary condiment in its own right.

All parts of the plant (excluding the roots) can be harvested and eaten, imparting a cool and refreshing flavour to food and drinks that are reminiscent of cucumber.

Its blooms are most commonly used to garnish alcoholic drinks or infuse teas, while its leaves can add zip and zing to salads, sandwiches, dressings and side dishes.

With so many attractive attributes, then, it’s little wonder that borage has quite an illustrious history.

Are you won over yet? Don’t delay any longer – follow these simple tips to encourage plentiful borage in your own garden.

Most borage varieties are annual, which means that they will die out within a single year, though many are very adept at self-seeding.

On the other hand, there are some cultivars that are perennial. Although the flowering season of these is generally shorter, they do last for several years or more.

Here are four of the most common varieties to choose from:

Deciding which type of borage you prefer in your borders and backyard displays will depend primarily upon whether you’re looking for a perennial or an annual, what size plant you wish for the space available to you and whether you’d prefer blue or white blooms.

How (And Where) To Plant Borage

Thankfully, borage is an unfussy plant that will grow in most soil types with little in the way of fertilisation or maintenance.

It does insist upon exposure to the sun, however, so make sure you plant it in a spot that receives sunlight for at least half of the day.

The plant absolutely hates waterlogged soil, so if your garden is particularly slow draining, you may wish to prepare the area with fine-grit or gravel.

Mulching with organic matter is not strictly necessary, but will certainly encourage a fuller and larger plant.

Ideally, you should seed borage exactly where you wish it to flower, since it doesn’t take too kindly to transplantation.

It can handle a potted environment if that’s preferable, though you should ensure that you select a pot large enough for its roots to grow and spread – that means at least 30cm in diameter and 25cm in depth.

It prefers soil that isn’t particularly fertile, so there’s usually no need to add any artificial additives to its planting environment.

The best time to sow annual borage seeds is in mid-spring (April/May), though a second sowing is possible later in the season.

Perennial borage seeds will also perform best when planted at this time, but are more forgiving if put into the ground at any other time of the year.

The plant is quite effective at self-seeding, so if that’s something you wish to encourage, simply leave the faded flowers on the plant. If not, remove them as soon as they have finished blooming and collect the seeds for replanting the next year.

To plant, simply dig out a little hole 1.5cm deep and place a single seed in it, then cover over with moist soil.

Space out your rows 30cm apart and once the seedlings have begun to break through and reach a height of around 5cm, thin them out to ensure there is at least 30cm between them.

If they grow any closer together, their foliage can begin to develop symptoms of mildew.

As alluded above, borage is invariably a hardy and stress-free plant to grow – it’s even been known to thrive in rubbish dumps and at the sides of roads and highways!

It does prefer moist soil, however, so be sure to top up the (generally ample) precipitation of the British climate with your own water in times of drought or dryness.

If growing indoors in a container, it will require frequent irrigation, which could even mean daily watering during summer.

The same goes for its feeding habits. Fertilisers should only really be used if it’s being cultivated in particularly poor or sandy soil, or else if you’re growing it in a pot using store-bought compost.

That’s because the nutrients can run out within six weeks of planting, so you can top up their levels by administering an annual dose of general fertiliser in either situation.

As for maintenance, annuals do not require any pruning whatsoever.

Perennial varieties may demand occasional paring back during the peak of the warmer months.

Having said that, both will benefit from stripping away faded flowerheads to encourage further growth of more flowers during summer, though it’s not strictly necessary.

Once the flowering season of an annual has run its course, simply dig up the whole plant by its roots and use it as compost for the following season, as the nutrient-rich leaves will enhance fertilisation of the soil next time around.

If you are going to use the plant as compost, be sure to remove its seed heads first, however, or you could soon find borage popping up all over the garden!

The leaves and the flowers are the parts of the plant most commonly harvested for culinary purposes, both of which should be plucked in the morning after the dew has dried, but before the sun has reached its full strength and made either wilt.

The leaves lend themselves well to spicing up salads and dressings with a refreshingly cucumber-like zing.

Alternatively, you can sauté or blanch them as you would with other leafy greens like kale and spinach.

If you wish to use them as dried seasoning, simply hang them in an airy room for a day or two, or else pop them in the oven for 10 minutes.

As for the flowers, these are primarily used as a garnish to add colour to cocktails, such as fruit punches or any drinks involving Pimm’s.

They work especially well when frozen into ice cubes, which is a great way to conserve them if you have too many.

In general, borage is a resilient grower that won’t succumb to many pests or blights. However, there are a handful of potential issues you should be aware of, including: