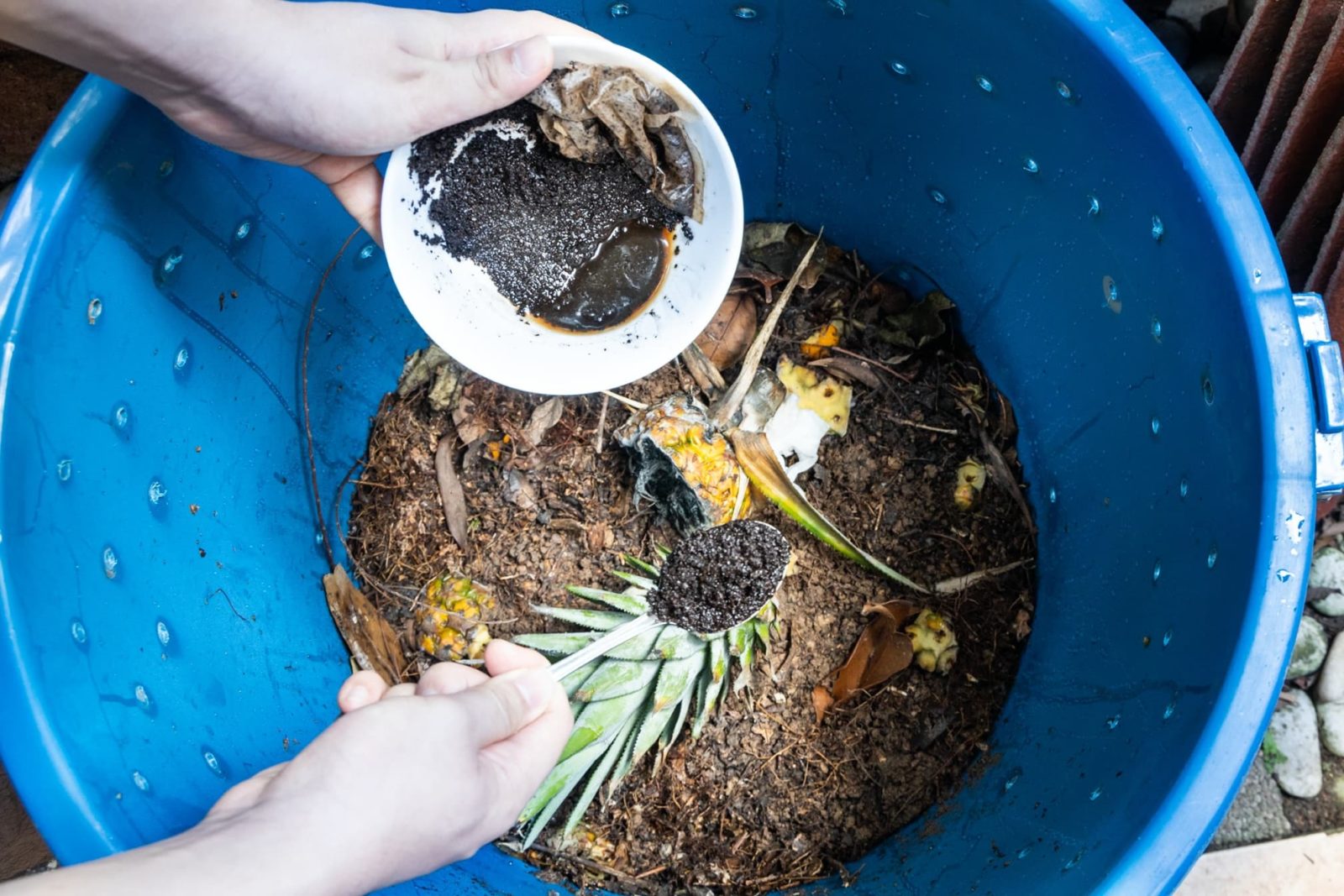 Coffee grounds can be a very useful organic material, but composting them is only a good idea with certain caveats.

In this article, we’ll look at the reasons why composting coffee grounds can be a good idea, but we’ll also take a look at why you have to be careful.

We’ll explain the different methods for composting coffee grounds, and talk about how to avoid some common pitfalls.

Why Coffee Grounds Should Be Composted

It is important to understand that coffee grounds should ideally be composted before you use them in your garden in any other way.

Many gardeners advocate using coffee grounds as a mulch around garden plants.

But, contrary to much of the advice that you may find online, using them in this way is not usually a good idea.

The first thing to consider is that un-composted coffee grounds contain caffeine – and caffeine can have an allelopathic effect. [source]

This means that this substance can limit or curtail the growth of plants, making it prohibitive to use in the garden. [source]

This substance originally developed in plants as a means to reduce surrounding competition.

It gave the plants that contained it a competitive advantage.

Caffeine does not have this effect on all plants, but it could, when used as a mulch, cause certain plants to be less strong and healthy.

Scientists have also discovered that the caffeine present in coffee grounds can be sufficient to stop certain seeds from germinating effectively. [source / source]

So it would not be a good idea to spread it, for example, in a vegetable garden where you are about to plant some seeds.

Another reason that un-composted, unmixed coffee grounds are not a good idea as a mulch is that they compact very easily.

The coffee grounds, when laid as a mulch, can form into a crust over the soil.

It is a good idea to keep soil covered, either with a mulch or with living plants, but the soil covering should allow water and air to flow through.

Coffee grounds compact and therefore can restrict air and water flow to the soil beneath.

So when used incorrectly, this is another reason why coffee grounds in the garden could do more harm than good.

You can sprinkle some coffee grounds around plants and cover them with a mulch of leaves, straw, leaf mould or garden compost.

But turning the coffee grounds themselves into compost before using them as a mulch or soil amendment in your garden is usually a much better idea.

Why Coffee Grounds Are Useful in Compost Creation

So far, we’ve focussed on the negative effects of using coffee grounds in the garden; you might be wondering why we should go to the effort of composting them.

The fact of the matter is that coffee grounds, in spite of the limitations mentioned above, can be beneficial for your garden when used in the right way.

In organic gardening, we should always try to avoid waste whenever we can.

We should do our best to recycle nutrients and complete nature’s cycles to grow our food and other plants.

Composting coffee grounds is one of many ways that we can reduce waste and live in a more sustainable way. [source]

Creating compost is also very useful for the long term health of our gardens.

When we compost coffee grounds along with other organic matter and kitchen waste, we reclaim the nutrients those materials contain.

The nutrients they contain can help create compost that will feed your plants. [source]

Nitrogen is important in a composting system.

Often, the materials used in composting are categorised as either nitrogen-rich (green) or carbon-rich (brown) materials.

Though brown in colour, coffee grounds are characterised as a ‘green’ material due to their relatively high nitrogen content.

Adding nitrogen-rich materials like coffee grounds to a composting system helps the materials to break down more quickly.

The most important thing to understand is that coffee grounds should only be added to any composting system a little at a time.

Avoid Adding Too Much

Adding too many at one time without adding other materials can often have a detrimental effect.

You need to keep the compost in balance, and add plenty of carbon-rich materials too.

This means that the materials will decompose without oxygen – and that can mean that the compost will get slimy and begin to stink.

Another major problem is that coffee grounds can have anti-microbial properties.

The goal in home composting is usually to create the right environment and conditions for aerobic decomposition (the breakdown of organic materials in the presence of oxygen).

For decomposition to take place, we need oxygen, water, the right temperatures, and, crucially, a healthy population of micro-organisms.

Composting relies on the presence of a range of fungi, bacteria and other life. [source]

Unfortunately, adding too many coffee grounds to a composting system can kill the beneficial microbes upon which the system depends.

Vermicomposting experts suggest that as coffee grounds break down in a composting system, they release organic compounds and chemicals that may harm or burn earthworms. [source]

In composting, we rely not only on micro-organisms but also on other soil life – worms included.

The fact that coffee grounds may harm them is not good news for your garden.

But it is also suggested that adding plenty of carbon-rich feedstock to the compost reduces this problem.

Which composting method you choose for disposing of coffee grounds will play a role in determining how beneficial it can be, and also on how much of this material can be added to the system at one time.

Below, we’ll look at some common composting methods that could be effective ways to recycle and retain the nutrients that coffee grounds contain:

The most common form of composting in a domestic setting is simply adding your ‘brown’ and ‘green’ materials to a heap, bin or other container.

This type of composting is known as ‘cold composting’.

The materials do heat up to a degree in these systems as they decompose, but they will not heat up as much as they do in a hot composting system (described below).

Cold composting takes time: materials will break down effectively, but they will do so much more slowly than they do in hot composting systems.

Composting with worms is known as vermicomposting – it can be beneficial in speeding up the process of decomposition in cold composting systems.

But coffee grounds should not be added to a vermicomposting system (at least not in any significant amount).

A small quantity as a once-off will likely not do much harm as long as there is plenty of carbon-rich material (cardboard, dried leaves, etc..) in the system.

But you should not make a habit of adding coffee grounds to a system of this kind due to its impact on the worms.

If you plan to compost coffee grounds on a regular basis, it would be best to avoid a vermicomposting system.

Instead, it will be better to use other means to speed up decomposition if you want to create compost more quickly.

Investing in a compost tumbler (which will improve aeration) is one idea.

Note that it is possible to add more coffee grounds to your vermicomposting system if you ferment your food waste in a bokashi system first.

Bokashi is not technically composting.

Organic material is fermented rather than rotted – but it can be another interesting way to manage coffee grounds and avoid waste.

A bokashi system also allows you to compost other ‘tricky’ compostable materials. Such as meat and dairy products, for example.

Fermenting the coffee grounds first before adding them to a cold composting or vermicomposting system could be a good idea.

Some people experiment with using coffee grounds in place of the bokashi ‘bran’ usually used in bokashi systems.

So if you have access to large quantities of coffee grounds that you want to ‘recycle’ into soil amendment for your garden then this is something intriguing to look into further.

The higher temperatures mean that the materials will break down more quickly.

In hot composting, you are looking to achieve temperatures of between 60-68°C inside the heap or bin.

Coffee grounds can be beneficial to add in reasonably low quantities to a hot composting system because, as a nitrogen-rich material, they can help keep up the temperatures inside the heap or bin.

One of the negative impacts of composting coffee grounds is, as mentioned above, the effects on earthworms.

In a hot composting system, you will generally aim for a different carbon to nitrogen ratio than you do in cold composting.

In cold composting, you will generally add carbon and nitrogen-rich materials in relatively equal volumes.

By weight, you should add around 25 times more ‘brown’ material than ‘green’ material to the system.

You can hot compost coffee grounds along with other compostable materials in a heap or a container.

But you will need to take certain steps to ensure that the required temperatures are reached.

A heap should not be too small (ideally, it should be no less than 4ft tall and 4ft wide so materials heat up enough inside).

It can be insulated with a thick layer of straw or other carbon-rich material around the outside.

If you are using a container, it should be of a material that can absorb and retain heat.

Yet should be ventilated so the mix does not become anaerobic.

Hot composting can be more challenging than cold composting, but it will allow you to compost a wider range of materials – including small quantities of coffee grounds – more quickly.

We’ve already mentioned above that using coffee grounds as a mulch on their own is not a good idea, but there is one way to add them directly to your garden.

That is, through composting in place.

Unlike the other methods of composting mentioned above, this method does not involve creating a separate composting area in your home or garden.

Rather, it involves layering organic materials in place on your growing areas or garden beds.

Composting in place is sometimes referred to as ‘sheet mulching’.

It can be used to create new growing areas or raised beds.

As in a traditional composting system, this involves adding layers of ‘brown’ and ‘green’ materials.

Since materials are added in layers, new beds made in this way, by composting in place, are sometimes referred to as ‘lasagna beds’.

The materials in this type of growing area will break down in situ to slowly release nutrients for your plants.

Coffee grounds can be added to the ‘green’ layers of lasagna beds or in sheet mulching in moderation as long as they are well-mixed with other materials.

Care does need to be taken when composting with coffee grounds.

But get it right, and you can use the compost you create to add the nutrients they contain to your garden.