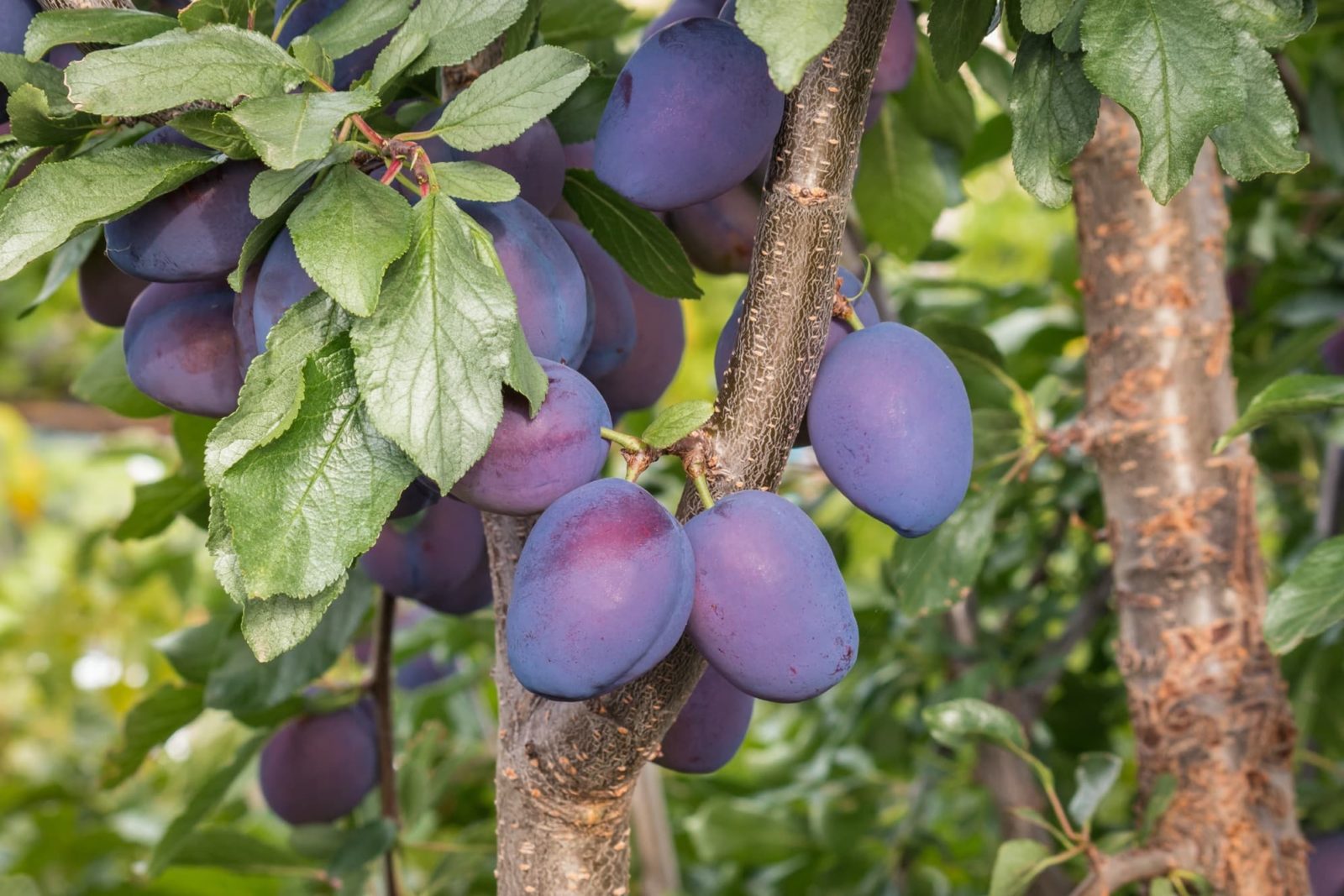 How To Get Rid Of Chafer Grubs In Your Lawn

Damsons are the purple gems of top fruit, not dissimilar to plums, but with smaller and more oval-shaped fruits.

The damson trees upon which the fruit is grown produce a wonderful blossom in the spring, with the fruits being ready to harvest late summer to early autumn. Damson trees take a long time to mature and produce a harvest, but when they do it is so worth it.

Damsons, or prunus insititia are small, purple coloured stony fruits grown here in the United Kingdom for their culinary uses and spring blossom.

They are often, rather sadly overlooked by the common plum and are grown on small trees and crop only once a year in late summer to early autumn.

The origin of the damson is unknown. It was originally thought that they came from Damascus, Syria and introduce to Western Europe by the Romans.

Another school of thought is that the damson originated as a cross in Asia Minor between a sloe and cherry plum, or even directly from the sloe. Either way they have been grown in the UK for centuries, especially in the northwest of the country.

Commonly grown varieties include Farleigh damson AGM, Shropshire damson and Merryweather (Award of Garden Merit (AGM) is awarded by the Royal Horticultural Society (RHS) and indicates that they perform reliably well in the garden).

They are easy to grow and look after and the fruits are a delicious ingredient for jams, puddings and gin, with recipes often passed down from generation to generation!

How to grow damsons

Damsons are produced on trees and ready to harvest from August to October in the UK. They will come true from a saved stone, but you could be waiting many years for the tree to mature and bear fruit. Most damsons are self-fertile and do not require another nearby.

Damson trees are readily available from online fruit tree suppliers and most often purchased as a bare root tree, grafted onto a specific rootstock to control its growth.

Bare root simply means that it comes with no soil around its roots and is thus easier and cheaper to transport. Potted trees can be available but at an added cost.

The fruit tree planting season here in the UK is between November and March, when the trees are dormant.

The commercially grown trees are dug up on order to be sold and this is why they are only available at a certain time of year.

Damson trees are most commonly planted directly in the ground.

However, they can be available grown on a dwarf ‘pixie’ rootstock that can be grown successfully in a large pot or container.

Tree shapes can include, standard, half-standard and dwarf – some specialist fruit growers even offer damsons as columns, step overs or even fan trained ready to be grown against a wall.

The rootstock they are grown on decides their mature height and spread so it is wise to check this before purchasing, as there is nothing more frustrating than the fruit being out of reach.

Damson trees are happiest in full sun and a relatively sheltered position. South or west-facing is ideal.

Planting a bare root tree is no more difficult than planting a root balled tree.

Ideally, a bare root tree should be planted swiftly on arrival to avoid it drying out. However, this may not be possible due to the ground being frozen or covered in snow; if this is the case store the tree with the polythene around its roots in a cool place like a garage or shed.

The main thing is not to let the root system dry out and so avoid putting it anywhere near a heat source.

To plant, dig a hole at least as deep as the roots and up to twice as wide. If the soil is hard break up the base and sides of the hole with a garden fork.

Drive in the tree stake close to where the main stem will be. Add some fertiliser and lower the tree into the hole, gently spread out the roots and make sure that it is planted at the same depth as it was previously.

Water well and top up the soil if it subsides. If planting against a wall, it is good to be aware that the adjacent area is often very dry, so it is recommended to plant the tree approximately 30-40cm away from the wall.

Newly planted trees need watering for the first 2 years, especially during the spring and summer. Water to the base of the tree, slowly so it can be absorbed.

Unless you are in an urban area place a tree guard around the stem to protect the tree from rabbits and deer as they love to eat the bark.

Tie in the tree to the stake with a suitable rubber tree tie to help protect it and keep it vertical in strong winds.

The stake and tie can be removed once established, usually after 2 years.

Damsons are classed as pruning group 1 and require annual pruning in the spring or early summer.

It is important not to prune a damson during the winter as this can make them susceptible to silver leaf disease.

Pruning methods usually depend on their form and habit.

Damson blossom signals that spring has arrived. Their blossom is a wonderful sight with single, small white flowers.

Damsons are reliable croppers producing a bountiful harvest for years to come, unless a late frost damages the blossom.

If using the fruits for cooking or making jam it is best to wait until the fruits are soft to touch and a deep purple, usually from August onwards.

If you plan to make gin with them, then the fruits can be picked slightly earlier when slightly firm.

Damsons straight off the tree can be especially tart which is why they are often cooked before eating, releasing their wonderfully rich flavour.

They make delicious jams, crumbles, cheese, vodka and gin, prized by those who grow them as they are rarely available in shops.

Recipes are often a closely guarded family secret, but also widely available online. Damson jam has to be one of the best though, it is so worth the time and preparation in order to stock your cupboards full of this nectar for the winter months.

There are 2 types of aphids that are attracted to damson trees.

The leaf curling aphid affects the foliage during spring leading to leaf distortion and the mealy plum aphid which although does not distort the foliage, leaves a sticky honey dew allowing sooty mould to grow.

Check the trees regularly from spring onwards as once any leaves have been distorted by the leaf curling aphid there is little that can be done.

Non pesticidal control can include encouraging predators such as ladybirds, hoverflies and parasitoid wasps, as well as squishing by hand.

Pesticidal controls can include using a plant oil wash in winter, fatty acid and oil sprays and insecticides if infestations are severe.

Brown scale are insects that are found on the woody parts of damson trees.

Small infestations can be tolerated with minimal consequences, but if large infestations occur, they can lead to decreased vigour and growth.

Controls for brown scale are the same as for aphids as above.

The plum moth can affect damson trees and can lead to caterpillars eating the damson fruit.

The caterpillars are pale pink in colour and are small, only 1cm long. Usually only the first fruits are affected and ideally should be tolerated as only a small proportion of the crop are afflicted.

Non-pesticidal approaches can include encouraging predators, such as hedgehogs and birds.

Pheromone traps that entice the males can be hung in the tree in May, these do not control the numbers but can give a good indication if further action is needed.

Organic insecticides with natural pyrethrin as the main ingredient can give effective, but short-lived control. For more persistent infections an insecticide such as deltamethrin or cypermethrin may be applied.

It is important to note that trees should not be sprayed whilst in flower to avoid any danger to pollinators.