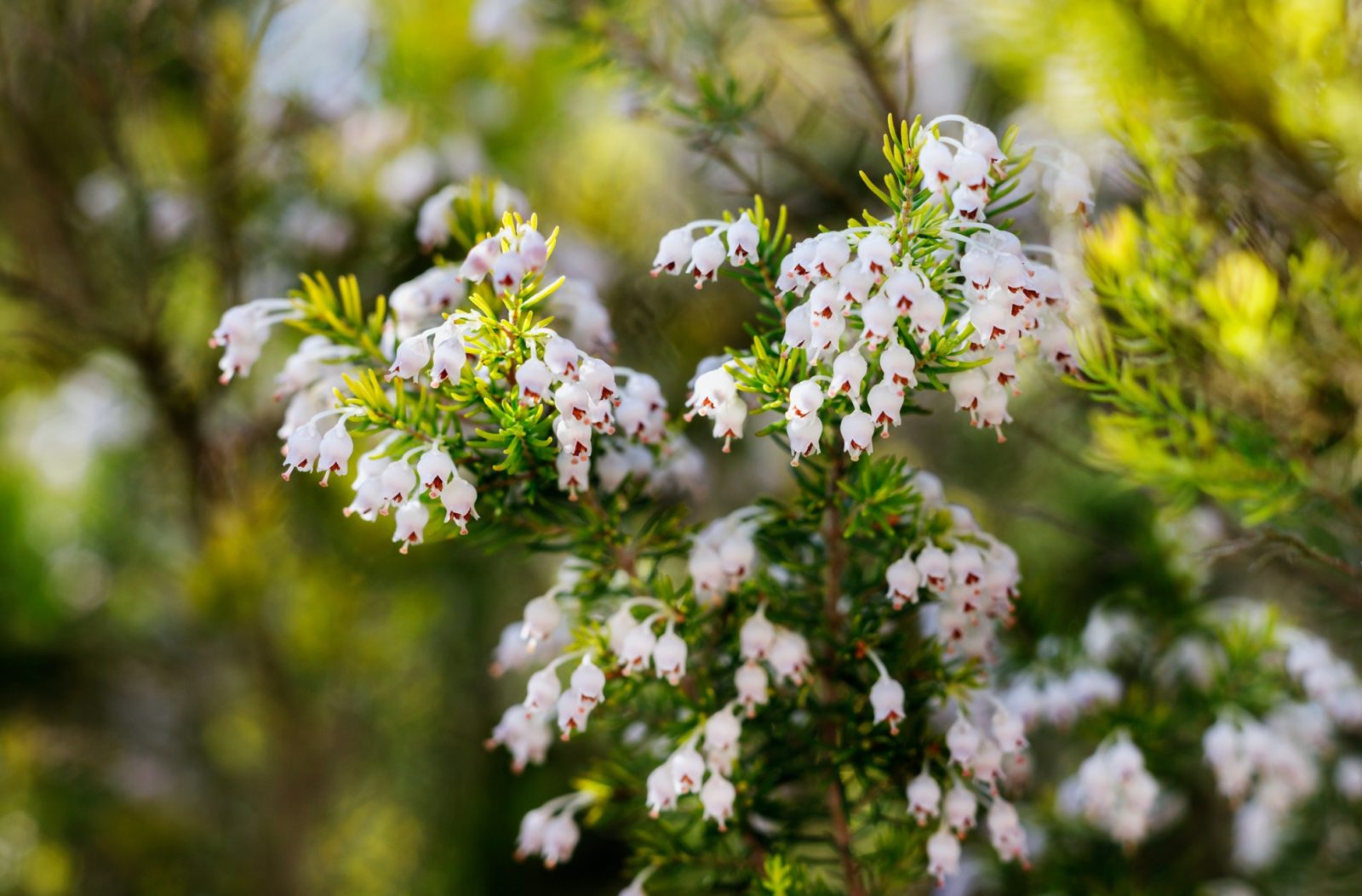 There’s heather, then there’s tree heather. And although the names are similar, the two plants are very different in terms of appearance and habit.

Whereas heather keeps a low profile and bursts forth in an exciting array of pinks and purples, tree heather cultivars riff on a theme that’s close to our stereotypical expectation of what an evergreen should look like: Proud, green, and angular. Between the varieties available you can find some truly astounding specimens, at home in any garden.

In this guide we’ll introduce a few of our favourite tree heather varieties, and tell you what you need to know to get this handsome plant growing in your garden.

What is tree heather?

Tree heather, also called tree heath (a useful way to distinguish it from regular old heather) goes by the Latin name of Erica arborea. It’s an evergreen, and the family includes shrubs and small trees. The plant originally hails from various parts of Africa, but has now become naturalised in other parts of the world. It’s popular as an ornamental plant in British gardens thanks to the aesthetic variety on offer.

Tree heather is a hardy and attractive plant with varieties coming in a wide range of shapes and sizes. If you’re looking for something to bring a little visual interest to your garden, and you’re attracted to the general evergreen aesthetic, then tree heather could be right up your street.

Tree heather wood – also called briar – is also incredibly hard, and lends itself excellently to smoking pipes, jewellery, handles for knives and similar implements, and more. So if you’re a craftsman in it for the long haul, this could also be a reason to grow tree heather!

To give a little taste of what tree heather can bring to your garden, we’ve chosen three varieties that showcase the best the plant has to offer. These cultivars have all been awarded the Royal Horticultural Society’s Award of Garden Merit (AGM), indicating that they are well suited to growth in British gardens.

In our opinion, Albert’s Gold aligns most closely with the image that comes to mind when someone mentions evergreen trees. It boasts triangular fronds of light green leaves, with spikes that carve a space for themselves in your field of vision. They’re like a scaled-down version of the enormous fir trees you’d expect to see in a rugged Canadian landscape.

Alpina shares many visual characteristics with Albert’s Gold, except the leaves generally weight in quite a bit darker on the green spectrum. Grown together with Albert’s Gold, Alpina showcases the rich variety of colours offered by tree heather. Grown alone, it’s another way to capture and replicate the rugged flora that can be hard to achieve in UK gardens.

Estrella Gold is a little daintier, compared to the rugged varieties we’ve shown already. Each leaf has a small white centre, creating a speckled, almost snow-like effect when seen from afar. This cultivar also grows to a far smaller maximum height than Albert’s Gold and Alpina, demonstrating the versatility available between the different types.

Generally speaking, tree heather is hardy and sturdy; being able to take whatever British weather sees fit to throw at it. There are many things you can do to give your plants the best chance at a long and healthy life, however. In this section we’ll tell you all you need to know.

Tree heathers are grown from younger plants, rather than from seed. Planting yours out is simply a case of finding the right spot in your garden (see the next section), and taking the following steps.

First, dig a hole a couple of times wider than your rootball, to a depth that allows the top of the rootball to align with the soil surface.

Next, remove your well-watered plant from its pot, tease apart the roots from the clumped root ball and plonk it into the hole.

Depending on the variety you’re growing, you may want to place a stake at this stage. This is a structure made of wood or similar that provides support for the growing plant, making up for the strength that the root system would provide to a fully-established plant.

Finally, fill in the hole, ensuring that the soil is packed down tightly enough to fill air pockets, but not so tightly that you crush the plant.

Choose a spot with acidic soil that can drain freely. Soil that retains moisture, or is neutral or alkali, will stifle or even kill off further tree heather growth.

This plant likes full sun or partial shade, and will do well growing under the canopy of a bigger tree. In fact, the shelter offered by another tree will promote better growth because, while hardy, Erica arborea prefers not to be fully exposed to the elements.

When planting out your tree heather, we advise working a few centimetres of compost well into the soil in the area your plant will go. Be generous with the compost, taking into account the eventual size of the mature plant. Enriching the soil with nutrients early on will give the developing root system the best possible shot at getting what it needs to grow big and strong.

With evergreens, you need to stay vigilant. In the first season, check in often to see whether the roots are moist. You’ll want to keep them well-watered to promote the strongest growth.

Then, through winter, you need to take into account for the water lost through the leaves – much more of a consideration for evergreens than other plant types. Keeping your tree heather well-watered throughout the year, rather than waiting for it to show signs of thirst before watering, will best set you up for success.

As a shrub, tree heather will do well with regular annual pruning to keep it in shape. The best time of year to do this is late spring: After the frosts that may damage freshly cut areas, and with enough time to allow new growth to cover up most of the visual evidence of pruning.

This said, however, pruning isn’t required to keep the plant alive. Tree heather falls into RHS Pruning Group 8, meaning it can do without.

If you do decide to prune, do so after flowering. Remove any diseased or damaged shoots, and then thin out sections that may have become crowded.

Tree heather is a hardy plant that’s not likely to attract any pests or prove particularly problematic. The most likely issue is a thirsty plant struggling to thrive, but if you follow the steps in the watering section, you should be able to control against that. Some varieties are susceptible to certain issues though, so keep an eye on the following –

No, that’s not a typo. Phytophthora is a species of fungus that can wreak havoc on the roots of certain tree heather varieties. Rot caused by phytophthora is hard to distinguish from that caused by overly-moist soil. Over time, rot reduces the roots’ ability to draw nutrients from the soil, leading to wilting, discolouration, and general poor health. Unfortunately, once you see symptoms above ground, things are usually too far gone below ground to salvage the plant.

Keeping soil well-drained to control against rot caused by waterlogging should help you be more certain that any rot you do encounter is phytophthora. In this instance, you need to remove and destroy the plant, then to replace the topsoil in the affected area. While drastic, this is the best solution in ensuring that future outbreaks do not occur.

Hopefully you’re now convinced that tree heather should make a visit to your garden. The rugged evergreen aesthetic and notably fragrant scent are two compelling reasons, along with the versatility and hardiness that let this plant hit a wide array of gardening goals.

Whether you go for the forest-in-miniature Albert’s Gold, the daintier and more delicate Alpina, or one of the many other Erica arborea varieties, tree heather is sure to make a good impression. We can assure you that you won’t look back, whatever the heather.