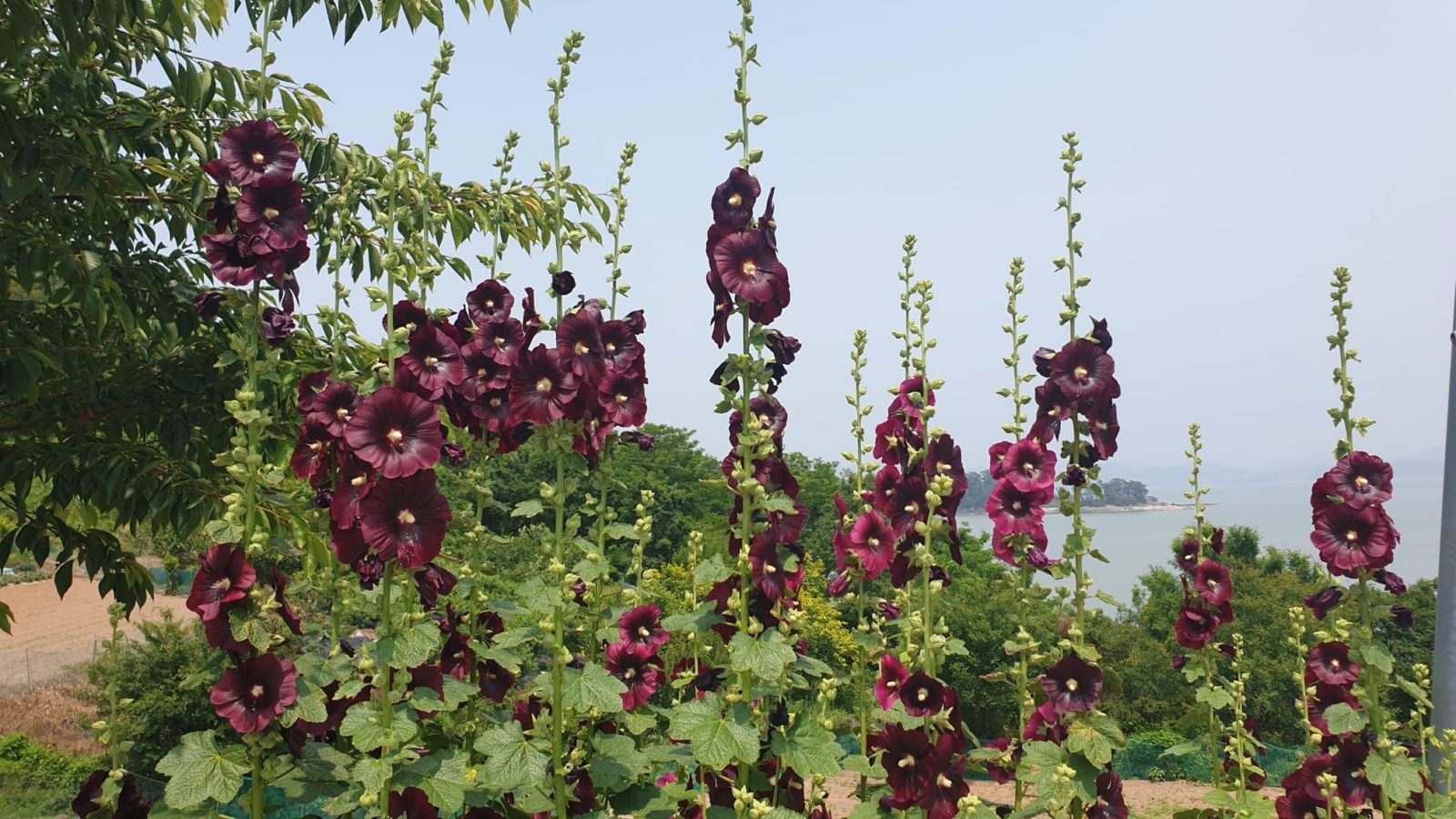 Hollyhocks are perhaps one of the most quintessential cottage garden plants there are.

Hollyhocks are easy to grow and care for and look impressive in any border or planting scheme.

Hollyhocks are often thought of as perennial plants, as they tend to come back year after year. They are however actually a biennial, meaning that they flower the year after being sown.

It is thought that they originated from Asia and were introduced to the UK in the 15th century and are classified as part of the Malvaceae or mallow family, along with lavatera, abutilon and hibiscus.

Hollyhocks are a tall slender plant, perfect for the back of a border, as some can grow in excess of 2m given the right conditions. Large flowers decorate their tall stems in all manner of colours, from pink and yellow right through to purple and even almost black.

Listed as one of the Royal Horticultural Society’s plants for pollinators, they provide a great source of nectar and pollen for bees and other insects when they are in flower, during the summer months.

There are many different hollyhock varieties available here in the UK, so it is simply a choice of which colours would go well with a chosen colour scheme or planting plan.

Available as either single or rather elaborate double flowers, all are equally impressive to grow, however, most double versions are not pollinator-friendly.

To help you choose here are some of the best varieties available here in the UK:

Hollyhocks can suffer from rust, which is best avoided if possible. Some varieties are now bred to be more rust-resistant which is something to keep in mind when choosing.

Hollyhocks are real sun lovers. They prefer a south or west-facing spot in the garden and are more suited to beds and borders rather than containers.

Although happy in either a sheltered or exposed situation, try and avoid a really exposed site, as due to their height they will catch the wind.

Hollyhocks can cope will most soils if well-drained and relatively fertile, but they may struggle if grown on clay.

How to grow and care for hollyhocks

Hollyhocks are an easy plant to grow and look after as they require little maintenance.

Readily available as plants from garden centres or online, they can also be bought as plug plants and seeds.

To plant out a hollyhock in a pot, prepare the ground first by removing any weeds and incorporating some organic matter or compost.

Plant the hollyhock in the ground at the same depth it was in the pot, firm in and water well. Hollyhocks need lots of space so the recommended spacing if planting in groups is 60cm apart.

In an exposed garden, it is advisable to tie the stems as they grow to a stake or bamboo cane to save them from getting blown over.

Hollyhocks need regular watering to begin with, but once established the plants should not need much except during hot and dry spells.

Hollyhocks shouldn’t need to be fed during the growing season, especially if the soil is relatively fertile already.

If the soil is already poor to begin with, it is worth adding some well-rotted organic matter prior to planting or applying fertiliser during the growing season as a liquid feed.

Once the flowers have died back, the stems can be left on to allow the seed pods to naturally self-seed around, the seed saved and stored for future sowing, or cut down.

Hollyhocks are a relatively easy plant to grow from seed, whether bought or saved from previous plants, but beware that any plants grown from parent plants may not necessarily come true.

To save the seed from a plant, it is necessary to leave the flower stems on until after they have finished flowering. Wait until the seed heads turn brown, remove the pods and keep in a dry and moisture-free container until sowing.

Hollyhock seeds are large, flat and easy to handle and are hence a great flower to sow with children. The seeds are best sown under cover, such as in a greenhouse or on a windowsill in April or May, or directly into the ground in June, once the soil has warmed up.

To sow indoors, fill a tray or modules with a fine seed sowing compost and water well. Sow the seeds at a spacing of 5cm apart, press them down gently and cover lightly with soil.

It is sometimes recommended to soak the seeds overnight in water prior to planting, which will soften the outer coating and potentially help increase their chance of germination.

Once the seeds have germinated, make sure they receive as much sunlight as possible and prick out carefully when ready, approximately 4 weeks later.

The plants will be ready to plant out in their final position in June or July, where they will continue to grow on, but not flower until the following year.

Being a biennial, hollyhocks require a little patience until they flower, but the wait is more than worth it when their spires of colour triumph over garden borders.

Hollyhocks have long been regarded as a stalwart of cottage garden planting and look equally good in a coastal garden scheme or planted along a wall.

Hollyhocks go well with many typical cottage garden plants including – but not limited to – delphiniums, peonies, phlox, lavender and lupins.

When plants are small, try surrounding them with barriers, such as wool pellets or copper rings and try and encourage predators including birds, frogs and hedgehogs into the garden.

Along with brassicas, hollyhocks are susceptible to damage from the flea beetle.

Damaging the leaves and sometimes the roots, the flea beetle’s calling card is round holes in hollyhocks foliage.

The holes can only be a few and nothing to worry about, but a bad infestation can leave the foliage looking like a Swiss cheese, with more holes than leaf.

Control can include picking the beetles off and encouraging more predatory birds, frogs and hedgehogs into the garden.

However, with a bad infestation, contact insecticides may have to be applied, but not when the plant is in flower, as this poses a danger to bees and other pollinators.

Hollyhocks are sadly very prone to rust, an unsightly fungal disease that causes the plants to weaken. Spread by airborne spores, rust is typically worse during a wet summer and affects all parts of the plant.

Small yellow, orange or red bumps or pustules appear on the underside of the lower leaves before spreading upwards.

Prevention is key, as controlling rust once established is not easy. At first signs of rust, the affected leaves must be quickly removed and disposed of, not composted.

The chances of rust can increase with the age of the plant; hence it is recommended to grow hollyhocks as biennials and replace old plants. Not planting too densely may also help prevent rust as this encourages good air circulation.

For severe rust, fungicides may have to be applied. Tebuconazole and triticonazole are approved for the control of rust on ornamental plants and may prove effective. However, they may need regular applications, especially during wet weather.

As previously discussed, some hollyhock varieties are now showing improved resistance to rust and may well be worth pursuing.