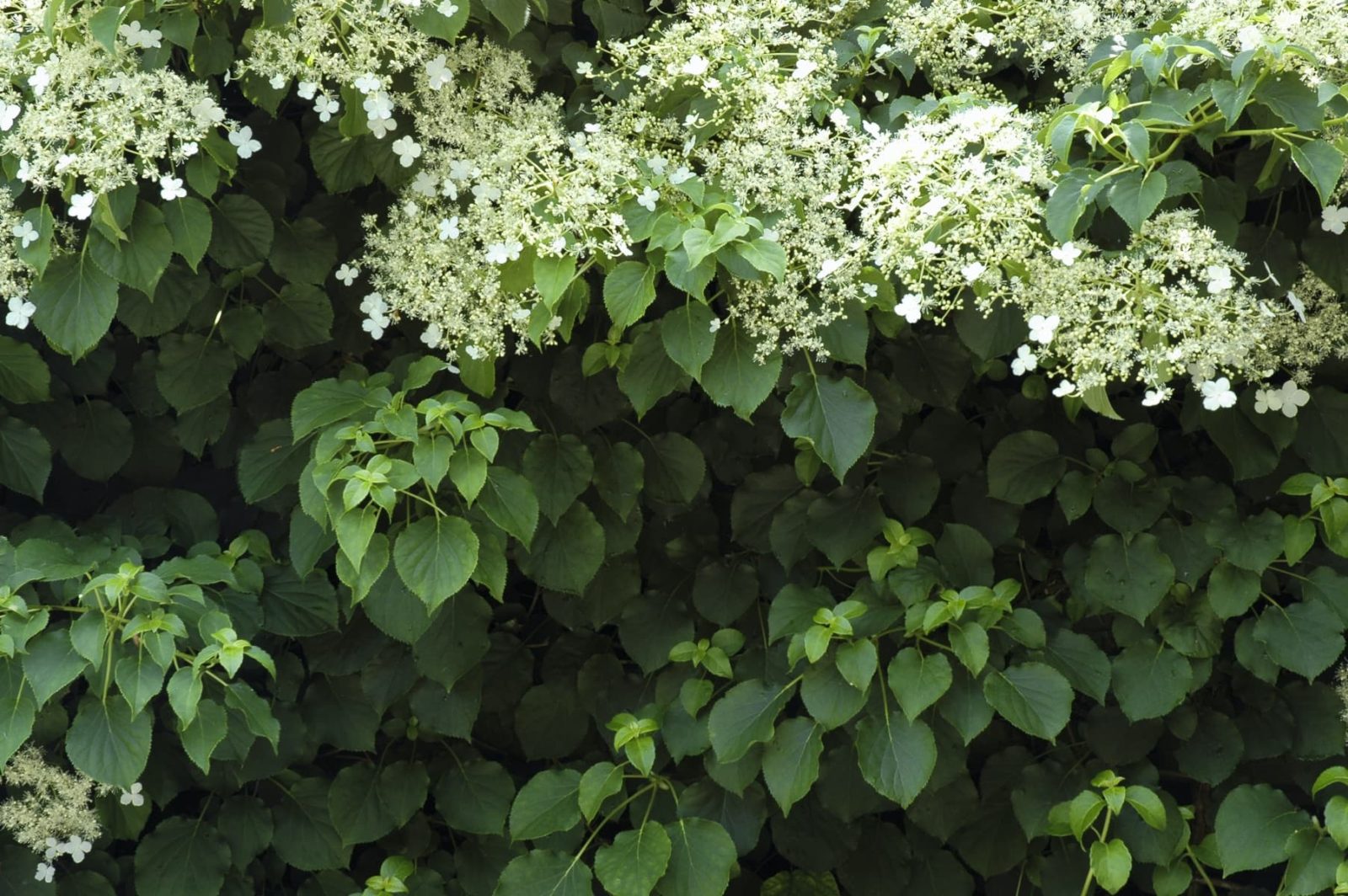 Visualise a lush vertical sheet of dark green foliage up to 15 metres high, sprawling and spreading across the side of your summer house or up a wooden trellis, and bearing delightful, wavy clusters of white or creamy little flowers throughout summer without much regard for little things like sun or pH. Like that vision? Be introduced to the Climbing Hydrangea.

That near-ubiquitous garden favourite, the little Hydrangea plant, has a few less well-known relatives. These are the less-ubiquitous, not-so-little, Climbing Hydrangeas. Of the nearly 2,000 Hydrangea varieties a mere handful are climbers.

For the most part, they are deciduous woody vines that climb using adventitious aerial roots that are not damaging to bricks or to other trees. A supplementary means of climbing is that the vines and branches themselves entwine around support structures, also holding fast using suckers.

Most species are native to a geographical area stretching from Siberia and Sakhalin through Southern China, Taiwan, Korea and Japan, stretching down to the Himalayas, India, and Myanmar in the South. Only two species make their home in Mexico, Central America, and the Southern United States.

Different varieties attain different heights, but the tallest ones can grow up to 30 metres. Climbing Hydrangeas show even more diversity in their foliage. One species may have large, round leaves while another has narrow, elliptic leaves, with a few opting for the middle ground and displaying ovate leaves. One or two varieties have shiny and glossy leaves while one has leathery leaves with most being neither particularly glossy nor leathery.

This climber bears corymbs of small flowers ranging from white to cream in colour. A corymb comprises of large and showy sterile flowers enclosing very small fertile flowers. Though they may seem insignificant, they are actually of value in floristry, bringing rhythm and balance to floral arrangements. Floristry aside, a thick layer of these flowers out in the open is both pleasant and quite decorative.

If a Climbing Hydrangea has nothing to climb up on, it will creep along the ground, over time covering up to 60 square metres. It forms pretty mounds about 1 metre tall, providing an attractive ground cover of lush undulating foliage richly dappled with white in the summer.

When one talks of Climbing Hydrangea, it is usually about Hydrangea anomala. This species is native to Sakhalin Island, Japan, and the Koreas. The genus name is a composite of ýdor (ύδωρ) and aggeion meaning, respectively, water and vessel, describing the appearance of the plant’s seed capsules. A mere handful of other species exist.

Hydrangea anomala: This species can grow up to 12 metres. From late May to July it bears corymbs that can be 15 centimetres across. These are composed of a ring of sterile showy flowers that are white enclosing a clutch of small fertile flowers ranging in colour from creamy white to greenish-yellow. This formation is called ‘lacecap.’ It bears fruit from September to October.

This is an unusual plant whose bark exfoliates, that is it peels off. It prefers part shade to full shade.

Hydrangea anomala subsp. petiolaris (formerly Hydrangea petiolaris): A subspecies of H. anomala, petiolaris is so named because of its long and distinct petioles. It can grow considerably taller than the species, up to 20 metres, and its floral corymbs are also bigger with a diameter of 25 centimetres. It has better winter hardiness than the base species.

Hydrangea anomala subsp. petiolaris ‘Miranda’ (or ‘Firefly’): More bushy and lush than its subspecies, cultivar Miranda (or Firefly) spreads more as well because it puts out lateral branches that grow away from the vine’s structural support, to a length of 2 metres.

Schizophragma hydrangeoides, aka Japanese Hydrangea Vine: This variant from Japan is known for its leaves which are about 10 centimetres long and are toothed and heart-shaped. It bears large lacecaps about 23 centimetres wide. These comprise of cream-coloured small flowers ringed by showy white sterile flowers.

Decumaria barbara: The only Climbing Hydrangea that is native to the United States, growing in the South-East, this climber has glossy leaves of a deep shade of green. Its white-to-cream floral clusters have a distinctly fluffy appearance.

Hydrangea seemanii: This Climbing Hydrangea is an evergreen. It grows in Mexico and Central America. It has large and rounded leaves and dense sprays of cream-white flowers.

Climbing Hydrangeas grow well in part shade to even full shade. Ideally, these plants should get some sunlight in the morning or evening, with shade or only dappled sunlight during the peak hours of the day. That said, in cold or temperate climates they can tolerate near-full sun. What they cannot tolerate, however, is dry soil. In dry soil, the vine will wither and it may even die. This climber must be watered regularly and the soil should be kept consistently moist.

The soil itself should be rich and fertile; best results are obtained in soil with humus or compost. It is not picky about pH, growing in soil ranging from moderately acidic to slightly alkaline.

Feed Climbing Hydrangea with a slow-release fertiliser in early spring so that it will last through mid-summer.

If you want to prune this climber, cut back vines as soon as flowering has finished, doing so before the appearance of fresh buds. If you delay this pruning and cut off vines with buds, it will result in a sizeable reduction in blooming the following year. In early spring, prune the dead flowers and other growth killed during winter.

You may be lucky enough to inherit a Climbing Hydrangea or get it as a bonus on some property. If such a plant is unkempt and overgrown and you want to bring it to manageable proportions, do not prune it suddenly; prune it gradually over 3 years.

You can shape or trim this plant by cutting off unwanted vines at the point they join the stem. Cut off dead, damaged, or unwanted stems at the plant’s base to kick-off fresh growth just before the growing season commences.

One practical reason to prune this vine would be when it is climbing up a wall rather than a trellis, tree, or anything else that it can entwine itself around. When Climbing Hydrangea scales walls, it can rely only on its aerial roots and suckers which are not as strong as they are in other climbers. If the plant gets too bushy and heavy away from the wall, it may topple or slip. To avoid such a possibility, prune the climber so that it is flatter against the wall.

The best time to plant Climbing Hydrangea is mid-Spring after there is no danger of frost. It can be planted in summer too provided it is kept properly watered.

If the plant doesn’t seem to grow, do not worry. It grows rather slowly during its first 2 or 3 years as most of its energies are spent on developing and spreading it root system. Thereafter, upon becoming established it will grow much more rapidly, even as much as 1 metre per year. However, it will take about 5 years for it to start developing flowers. It takes 10 to 20 years for Climbing Hydrangeas to reach their full height.

When one visualises that mythical Shangri-La, Hydrangea anomala has to be part of the pristine picture for it inhabits cool woody glades, sprouts beside babbling brooks, and decorates hillsides, from Southern China down to the Himalayas. As such, one might correctly conclude that temperate climes are to its liking but not steamy tropical conditions. Constant sun or bright sunlight can singe this plant. A band of temperature between 15° and 20° centigrade is just perfect for this vine. In contrast, Decumaria barbara can tolerate bright sun and semi-tropical conditions much better than H. anomala, the reason being that Climbing Hydrangea species exhibit diversity in more than just ‘looks.’

Climbing Hydrangea is best and most easily propagated by cuttings although horticulturalists also propagate it from seeds.

Take cuttings between April and June before the advent of flowering season but after the start of fresh growth. Sterilise a pair of secateurs with diluted rubbing alcohol. Choose a shoot that has leaf nodes and emergent aerial roots and cut it at a point below the roots so that the length of the cutting is about 25 centimetres. Press the cutting into rich and fertile soil that is loamy or peaty. The emergent roots and at least some of the leaf nodes should be underneath the soil’s surface. Water the cutting and ensure that the soil stays moist but not waterlogged. The cutting and the young plant may get partial sun but it should be protected from the afternoon sun or harsh sunlight. New growth should be observable in two to three weeks.

Where to Put Climbing Hydrangea?

Climbing Hydrangea plants can be put in many places for a variety of purposes. Here are some ideas:–

Climbing Hydrangeas are one of those uncommon plants that are pest-resistant and disease-free. Any problems it may meet would have their provenance in human error or neglect. For the most part, just make sure that the soil does not dry out and that it drains well.

Why won’t my climbing hydrangea bloom?

First, if your plant is young then you cannot expect it to bloom. Remember that a new Climbing Hydrangea may take up to 5 years before it produces flowers. Another cause could be dry soil in warm climates. Keep your Hydrangea vine watered and ensure that the soil stays moist. Yet another reason could be an excess of warm sun. Climbing Hydrangeas bloom profusely when shade predominates.

Finally, a fertiliser that is high in nitrogen content or nitrogen-rich soil can adversely affect Climbing Hydrangeas’ blooming. For established vines that are not blooming, either cut out fertiliser or use 0-5-5 fertiliser to kill two birds with one stone: 0-5-5 fertiliser has no nitrogen to retard blooming and contains phosphorous (besides potassium) which stimulates blooming.

They certainly can but the combination of full sun and hot weather is a no-no. When growing this vine in warm or humid climates it is almost necessary to protect it from full sun.

Although it is preferable as a general rule to protect Climbing Hydrangeas from the afternoon sun, it is not necessary in colder climates.

In fact Climbing Hydrangea does not ’need’ any support structure at all. Sans trellis, pergola, and such, this vine will spread in undulating mounds along the ground, sending shoots and branches horizontally in all directions. For vertical growth, Climbing Hydrangea can make use of any type of support such as trees and walls to aid it in its upward trek. However, whichever structure that this vine makes its ascent on had better be strong because over several years the plant, growing and spreading as it does, becomes quite heavy.

No, it will not damage brick. At most, its suckers will leave a sticky, adhesive residue on bricks. Mortar is a different matter; this climber damages mortar, breaking it down.

Can this plant grow in a pot?

Yes. It requires a very large pot or container with a drainage hole. The soil should not be as rich as it may be in the open, requiring less humus and compost and more gravel and vermiculite, the former to ensure good drainage and the latter for retention of moisture. The potted vine should be watered regularly and the soil should be kept moist.