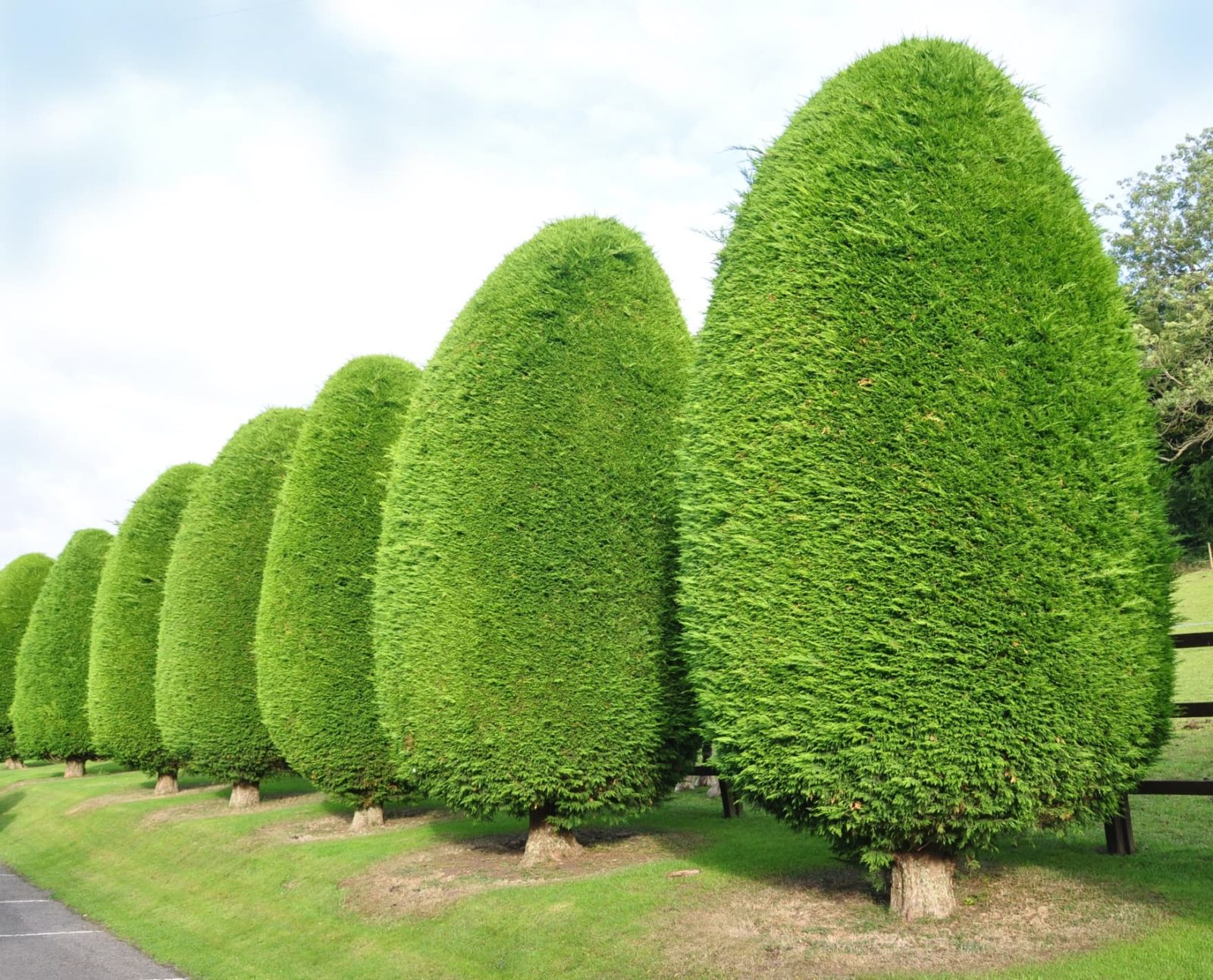 The Leylandii (x Cuprocyparis leylandii) is a fast-growing, evergreen conifer that makes up much of our British hedgerows, and divides many a garden – and opinion.

A UK-born hybrid of the Monterey cypress and Nootka cypress trees, Leylandii is a hardy plant which grows quickly and easily in the UK and thrives in a wide a variety of soils. When properly pruned and managed, it makes the ideal hedgerow or screen – dense, green, and capable of reaching great heights.

Many people admire Leylandii for its impressive size and foliage, which can provide shade and shelter, and create a feeling of privacy in even the most overlooked gardens. But it’s not for everyone – this thirsty tree consumes a lot of nutrients from the soil, and can block out much-desired sunlight. Leylandii is responsible for more than its fair share of neighbourly disputes!

Providing you know what you’re getting into, Leylandii can make a highly advantageous addition to your garden. To make sure you have all the facts and are well-equipped to avoid neighbourly warfare, we’ve put together this Leylandi growing guide, with all the information you need on how to grow, care for and maintain Leylandii, and stay in your neighbour’s good books.

Leylandii is said to have originated on the Leighton Hall estate, near Powys in Wales. Here, the Monterey cypress and Nootka cypress trees, which are both native to North America and usually grow 400 miles apart, were brought into contact for the first time. They were cross-fertilised, creating 6 clone plants, and the Leylandii (or Leyland Cypress) as we know it today was born.

Leylandii is a fast-growing, pyramidal conifer that can reach over 30 metres / 100 foot tall. It has reddish-grey ridged bark, and brown slender twigs – although these are mostly concealed by the dense green foliage. This foliage consists of scaly, over-lapping leaves in flat sprays. The tree also produces ball-shaped brown cones, which on male plants have yellow tips at the end.

The two most common variants of Leylandii are Green and Golden. Of these, the green variant is the most common. It grows faster and taller than the gold, and its leaves are finer, scalier, and more blue-green in colour. In comparison, Golden Leylandii leaves are, unsurprisingly, gold-tinted. Within each variant are many different cultivars, including the bright green Hillspire, the blue-tinged Naylor’s Blue, and the yellow-tipped Gold Rider.

As is common in hybrid plants, Leylandii is sterile and is not capable of reproducing itself. This means that all of the numerous Leylandii plants growing in the UK today were planted by humans. Leylandii’s popularity stems from its dense foliage, inexpensive cost, and quick-growing nature (it can grow around 1 metre/ 3 foot every year).

The thick, evergreen foliage ensures it looks good year-round and can provide effective shade and shelter from the elements, as well as a privacy screen between gardens, a barrier against noise pollution, and a home for wildlife – it’s great for encouraging more birds into your garden.

A study by the University of Southampton also found that Leylandii was 40% more effective at reducing particulate pollution than other native hedging plants. This makes it particularly useful when planted in gardens near busy roads and cities, with a high level of traffic pollution.

The Leylandii is a hardy plant and will grow in many types of soil. However, Leylandii plants need a lot of nutrients and will drain your soil dry. In order to compensate, you will need to add a lot of compost or rotted manure, to replace the nutrients – the best times to do this are spring and autumn.

Similarly, Leylandii also has a high water requirement, and you should water it regularly with your garden hose whilst it’s growing. Once established, it is more tolerant to periods of drought, however, you should still water it to achieve the best growth. Leylandii does not like waterlogged soil, so make sure the area has good drainage. Full sunlight is preferred, but it will also grow well in partially shaded areas.

The best time to plant Leylandii is in spring or summer. Dig a hole twice the size of its root ball system, and place the Leylandii in the hole, ensuring that the top of the root ball is no more than 1cm below the top of the soil. Add potting soil to the hole to give the plant a nutrient boost, and pack the soil down. Water until it is moist, but not saturated.

In order to grow Leylandii as a hedgerow, you should position the young plants approx. 1 metre apart from each other (and a reasonable distance from any buildings). Keep them well-fed and watered, and within 3 – 4 years, they should grow into each other and form a hedge. Trim it regularly to keep it under control, and in the desired shape (see more on pruning below).

Due to its high nutrient and water needs, it can be difficult to grow other plants around your Leylandii. If you want to do so, you’ll need to choose hardy varieties that can cope with impoverished soil. Some good examples of ground-cover plants that can grow around Leylandii include periwinkle (Vinca minor), bergenia, and Welsh poppies.

As the Leylandii is technically native to the UK (being the child of two American trees, but born over here), it is tolerant of our seasonal climate, including wind and cold temperatures. It can grow in sunny and partially shaded areas, sheltered or exposed, and will withstand temperatures between -25°C and 30°C.

As far as soil goes, Leylandii isn’t too fussy there either and will grow in everything from sandy, clay or chalky soil – as long as it is moist. However, it doesn’t like waterlogged ground, as this can cause root rot, so the soil must have sufficient drainage. It is happy in both acidic and alkaline pHs.

Regular pruning of your Leylandii is essential – this is an especially fast-growing plant, and once it grows too tall, it can become very difficult to trim back. Neglected Leylandii can quickly become a source of neighbourly tension! Pruning too much at once can also mean the plant won’t regrow, causing a brown patch, so it’s best to keep on top of it.

You should aim to prune your Leylandii twice a year (or more if required), to keep it at the desired shape and height. Aim for a height of around 2 metres, as this will ensure you can easily maintain it, and keep it looking its best, with even foliage throughout the plant.

If your Leylandii grows too tall, it may not be able to get enough nutrients from the surrounding soil, and the lower branches may shed their leaves. It’s also important to note that trimmed old wood will not grow new leaves, so you want to make sure you’re cutting new green shoots, as well as removing any dead branches – and the way to do this is by regular trimming.

A good time to prune is in late spring/early summer, and then again in late summer/early autumn. Providing your Leylandii is within your reach, there’s no reason you can’t prune it yourself using pruning shears. Otherwise, you may wish to employ the services of a professional tree surgeon.

If you want to significantly cut back or fell a Leylandii that’s near your home, you will probably need to do this in stages (a tree surgeon will be able to advise). Gradual cut back will allow the surrounding soil to adjust to the higher water content as the Leylandii consumes less, and will prevent soil heave, which can cause damage to buildings.

Where To Buy Leylandii

Leylandii is one of the most commonly purchased plants in the UK, and is available from numerous sources. You can buy it from garden centres, specialist growers and online suppliers – including, as with almost everything else these days, Amazon.

Leylandii is susceptible to canker disease and blight. One such example is  Kabatina shoot blight, a damaging fungal infection which causes foliage to turn brown, and eventually grey, and needles to drop early. If your Leylandii is struck by this, prune the infected branches, apply a copper fungicide, and give it plenty of food and water to enable it to fight the disease. If this doesn’t work, you will have to remove the plant from the hedgerow.

Another fungal infection to watch out for is honey fungus. This deadly fungus spreads underground, and attacks the roots of the Leylandii plant, causing them to die and decay. Symptoms include leaves turning pale and dying, a white layer of fungus in the bark at the base of the plant, and honey-coloured toadstools appearing in the autumn.

There is no cure for honey fungus – an infected plant must be removed and destroyed, and a physical barrier created to avoid it spreading to neighbouring plants.

Common Leylandii pests include bagworms, scale insects and conifer aphids. Aphids (greenflies) can affect your Leylandii’s growth, sucking its sap and excreting a sticky residue (honeydew), which can make it vulnerable to mould. Signs that your Leylandii is affected include visible bugs, honeydew and distorted leaves. Infestations are usually controlled by natural predators in summer.

The biggest problems faced by Leylandii owners occur as a result of the plant growing too tall and out-of-hand, particularly in residential locations. Leylandii can often cause unwanted shade and needle dropping in surrounding gardens, leading to disgruntled neighbours and neighbourly disputes.

Similar issues arise as a result of the Leylandii’s roots draining the surrounding soil, which can make it difficult to grow other plants nearby, and in severe cases, can cause soil subsidence. For this reason, having a nearby Leylandii can even increase your home insurance premiums.

If you’re considering planting Leylandii, and you have close neighbours, you should always be considerate. Ensure your hedge is kept well-trimmed, so it doesn’t encroach on your neighbour’s garden, and ideally less than 2 metres high, so that it doesn’t block out light.

If any part of your hedge crosses the boundary into a neighbouring garden, your neighbour has a right to trim back that part. If a neighbour believes your Leylandii is damaging or affecting their enjoyment of their property, they can also put in a complaint to the council, who will take action.

How To Stop Leylandii Growing

Leylandii is a hardy, fast-growing plant, that can quickly grow out-of-hand – un-trimmed trees have been known to reach over 30 metres tall, and 8 metres wide. The only real way to stop a Leylandii growing is to kill it, or remove it from your garden.

If you need to stop Leylandii by removing it, it would be best to enlist the help of a tree surgeon, who can advise on the best course of action. This may involve cutting the tree down gradually, to allow the surrounding soil time to adjust, and avoid soil heave.

The best way you can prevent Leylandii growing too high is by regular pruning. As long as you do this 2 or 3 times a year, and cut it back enough each time, you shouldn’t need to worry. Aim to keep it below 2 metres tall, so you can easily maintain it – and keep your neighbours happy.