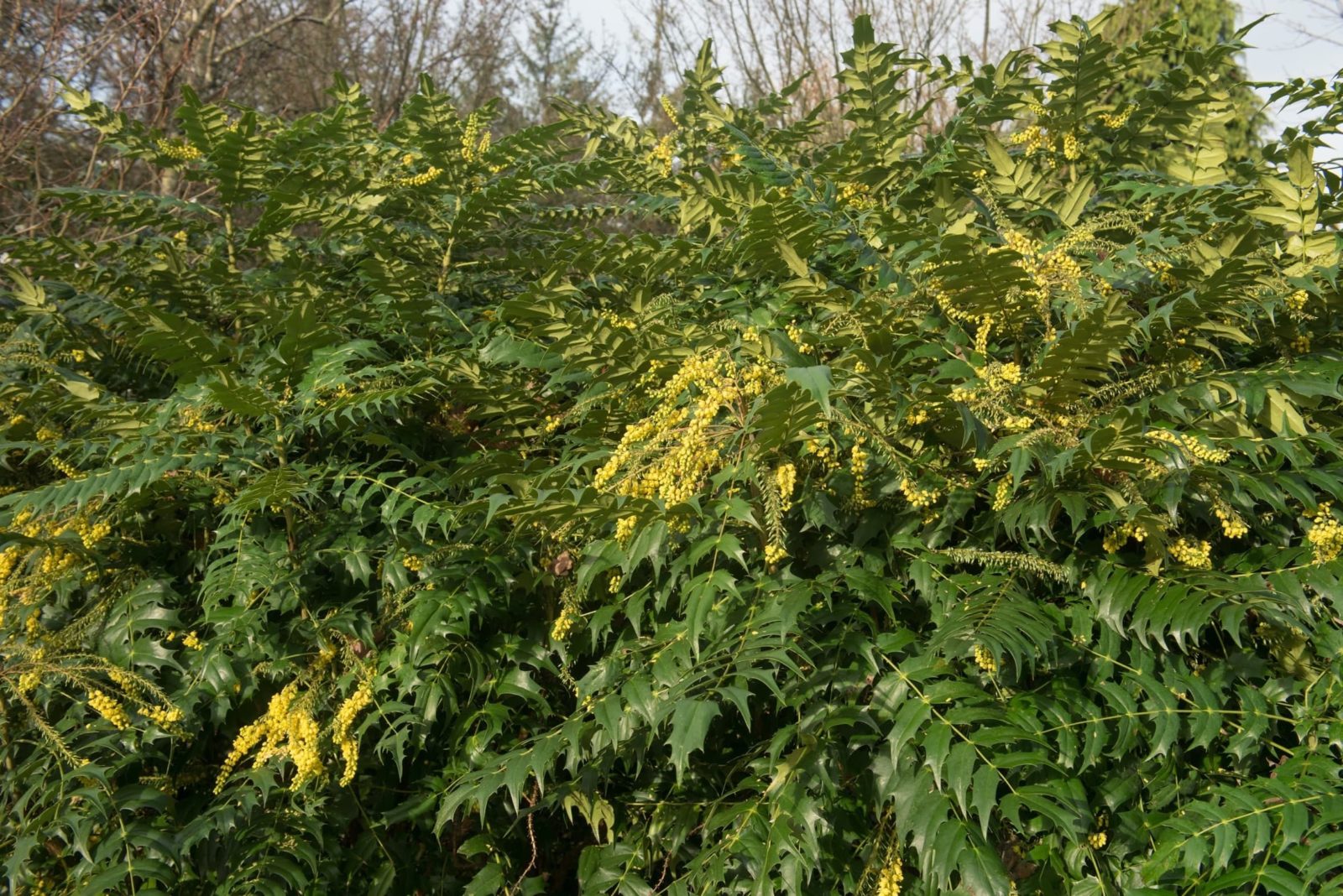 Mahonia is an evergreen shrub, with spiky dark green leaves, clusters of yellow flowers and purple or black berries.

The plant is late-flowering, meaning that it will not produce its pretty yellow blooms until late autumn and winter. This makes it a great choice for adding colour to your garden later in the year, long after most spring and summer flowering plants have wilted.

There are several species of Mahonia, many of which are easy to grow in the UK. It can thrive in sun or shade and does well in all soil types, so it’s an excellent choice for the trickier areas of your garden.

To find out everything you need to know about this hardy plant, read on for our full Mahonia care and growing guide – you’ll be enjoying sunny winter flowers in your garden in no time.

The Mahonia genus is part of the Berberidaceae family. The plant originates from North and Central America, and Asia, but has spread throughout the world, including to the UK. There are around 70 species, including Mahonia japonica, and the Mahonia x media group, which includes the popular ‘Charity’ and ‘Winter sun’ varieties.

All varieties grow to different sizes. The most popular species in the UK are upright and bushy, and range from 1 – 5 metres in height, with a spread of up to 3 metres. However, there are also some varieties which grow low to the ground at around 30cm tall, and which are suitable for use as ground cover.

Mahonia generally flowers in late autumn and winter, from November to March. The flowers are usually yellow, but occasionally red, and appear in clustered racemes. They are sometimes scented and can be followed by the production of purple or blackberries.

Due to their late flowering period, Mahonia is a popular choice for garden borders, alongside other evergreen shrubs such as Rhododendron, or plants such as snowdrops, to provide further winter colour.

Larger varieties, such as Mahonia ‘Charity’, are also often used as hedges and screening, where their thick and spiky nature makes them particularly effective at keeping out intruders. They are also seen in public areas, such as on roundabouts.

Another name for Mahonia aquifolium is Oregon grape, which comes from the fact that Oregon adopted Mahonia as its state flower in 1899, and that the appearance of Mahonia berries is similar to that of black grapes.

Despite their sharp flavour, Mahonia berries are edible, and can be eaten raw, or used to make jams and jellies.

Mahonia is a hardy plant and is therefore relatively easy to look after. It can grow in full sun, but it prefers partial shade or even full shade. Unlike many plants, it can thrive in an exposed location, providing it isn’t subjected to freezing winds – so you can position it almost anywhere in your garden.

It isn’t too fussy about soil type either and can grow well in sand, clay, chalk or loamy soil, and all pHs. The soil should be kept moist, but well-drained. Mahonia can withstand temperatures down to -15°C, but it is still a good idea to mulch the soil before winter (around September time), to help protect the roots from frost.

To plant your Mahonia, you should dig a hole twice the size of the root ball. It’s not a good idea to plant the roots dry, so soak the roots in a bucket of water for 30 minutes prior to planting. You will need to make sure your Mahonia plant has enough space around it to grow, as they do not do well in crowded conditions. Exactly how much is required depends on the variety and the size of its ultimate spread.

Place the plant in the hole, fill it in with compost, and feed with blood, fish and bone meal (avoid high nitrogen plant foods). Water upon planting, and frequently whilst growing, although do not allow the ground to become waterlogged. Once established, the plant will require very little watering, and you should only need to water it during extremely hot, dry periods.

Mahonia is very easy to care for and requires little or no pruning – although it will not be harmed by pruning, providing you allow it to reach its full height first. If pruning is required, the best time to do this is in spring, in April or May, after the last frosts have passed.

You can take this opportunity to reshape your plant, deadhead and remove any damaged or diseased shoots, and thin out any crowded-looking branches. As a general rule, you can aim to remove around one-third of the total old wood. Mulch and feed after pruning, to encourage new growth.

If you wish to propagate your Mahonia that season, you can prune harder in the spring, to ensure you have plenty of healthy new growth from which to take cuttings.

Another time you may need to prune your Mahonia is if it becomes ‘leggy’ (bare and woody) at the base. In this instance, prune away a significant portion of the lower branches, to allow more light to penetrate, and stimulate new growth. Some gardeners recommend annual pruning to avoid the shrub becoming leggy.

When To Plant Mahonia

The best time to plant a Mahonia is generally considered to be spring or autumn, when the weather is neither too hot nor too cold. When planting, you should first soak the root ball in water for half an hour, to ensure it is moist. Add a small blood, fish and bone meal upon planting, to encourage new root growth.

Mahonia’s natural habitat includes North America and Central America, as well as Asia and the Himalayas. It is often found growing in woodland and woodland edge locations, which is the reason it thrives in full and partial shade.

The plant is hardy, and can survive temperatures down to -15°C. It has a low nutrient requirement, which means it grows in all types and pHs of soils, and although it prefers moist, well-drained soil, it can survive periods of drought.

Where To Buy Mahonia

You can buy the most popular varieties of Mahonia in garden centres in the UK, or from online retailers. The varieties that are most widely available include Mahonia japonica, Mahonia x media ‘Charity’, Mahonia x media ‘Winter sun’ and Mahonia aquifolium. These will usually be available to purchase in pots, as plants of around 50cm tall.

Other varieties that are available in the UK, but less widely so, include Mahonia eurybracteata ‘Soft Caress’, which grows to a height of 1 metre, and Mahonia nitens ‘Cabaret’, which produces unusual orange-red flowers but is not as hardy.

If you know someone with an existing Mahonia, another way to acquire new plants is through propagation. The best time to propagate Mahonia is usually in late summer or early autumn, prior to flowering. You can do this easily by taking semi-ripe cuttings from the plant. Prepare for propagation by pruning hard in spring, to ensure plenty of new growth.

When it comes to making your cuttings, choose healthy, horizontal shoots from the current season, with short gaps between the leaves. Use sharp secateurs to make cuttings of approximately 15cm, just below the leaf node. Propagate in the morning, to prevent wilting.

Once you’ve taken the cutting, keep it cool, and aim to plant it within 12 hours. Dip the base of the cutting in rooting hormone powder, and plant in pots filled with a mix of potting compost and sharp sand. Place in a greenhouse or cover with plastic indoors to keep warm. Keep the soil moist, but well-drained, and regularly remove any dead material, to prevent mould.

There are not many diseases and pests common to the Mahonia plant. One possible problem to watch out for is powdery mildew, which will cause brown spots and a grey powdery fungus to develop on the underside of leaves. Help to avoid this by watering the soil, not the leaves of your shrub, and keeping it in a sunny location. If it develops anyway, you can treat it with a fungicide.

Another potential problem to watch out for is rust. This is more common in certain varieties, including Mahonia aquifolium. Rust will manifest itself as deep red, brown and black pustules on your plant, particularly on the lower leaf surface, which can reduce your plant’s vigour.

Help to prevent rust by removing all dead leaves and material after the growing period and pruning dense branches to ensure air can circulate through your plant. If caught early, you can tackle it by removing the affected leaves as soon as they appear – if not, you may need to apply a fungicide.

The main problem commonly encountered by growers of Mahonia is that the base of the plant becomes ‘leggy’ (bare and woody), whilst the foliage is concentrated at the top. If your Mahonia becomes leggy, prune several branches completely to allow more light to access the base, and prune any branches with leaves at the end back to around 30cm. This should encourage new leaf growth.

How tall does mahonia grow?

How tall your Mahonia will grow depends on the variety. Mahonia japonica will grow to around 2 metres tall, whilst Mahonia x media can reach 5 metres. There are smaller growing varieties, such as Mahonia aquifolium, which will reach approximately 1.5 metres, and others that can be used for ground cover, which peak at around 30cm. Bear in mind that it can take 10 – 20 years for a Mahonia to achieve its ultimate height.

How should I prune a leggy mahonia?

If you have a leggy Mahonia, with lots of bare, woody branches at the bottom, you should prune these branches back to encourage new growth. Remove several branches completely, to allow more light to reach the base of the plant. If any branches have some leaves at the ends, prune them back to around 30cm, to encourage new leaf growth closer to the centre.

Can mahonia be grown in pots?

Mahonia is not generally considered suitable to be grown in pots – it grows best planted directly in the ground, with plenty of space around for it to spread. As the plant is hardy down to temperatures of -15°C, you do not need to worry about moving it inside over winter.